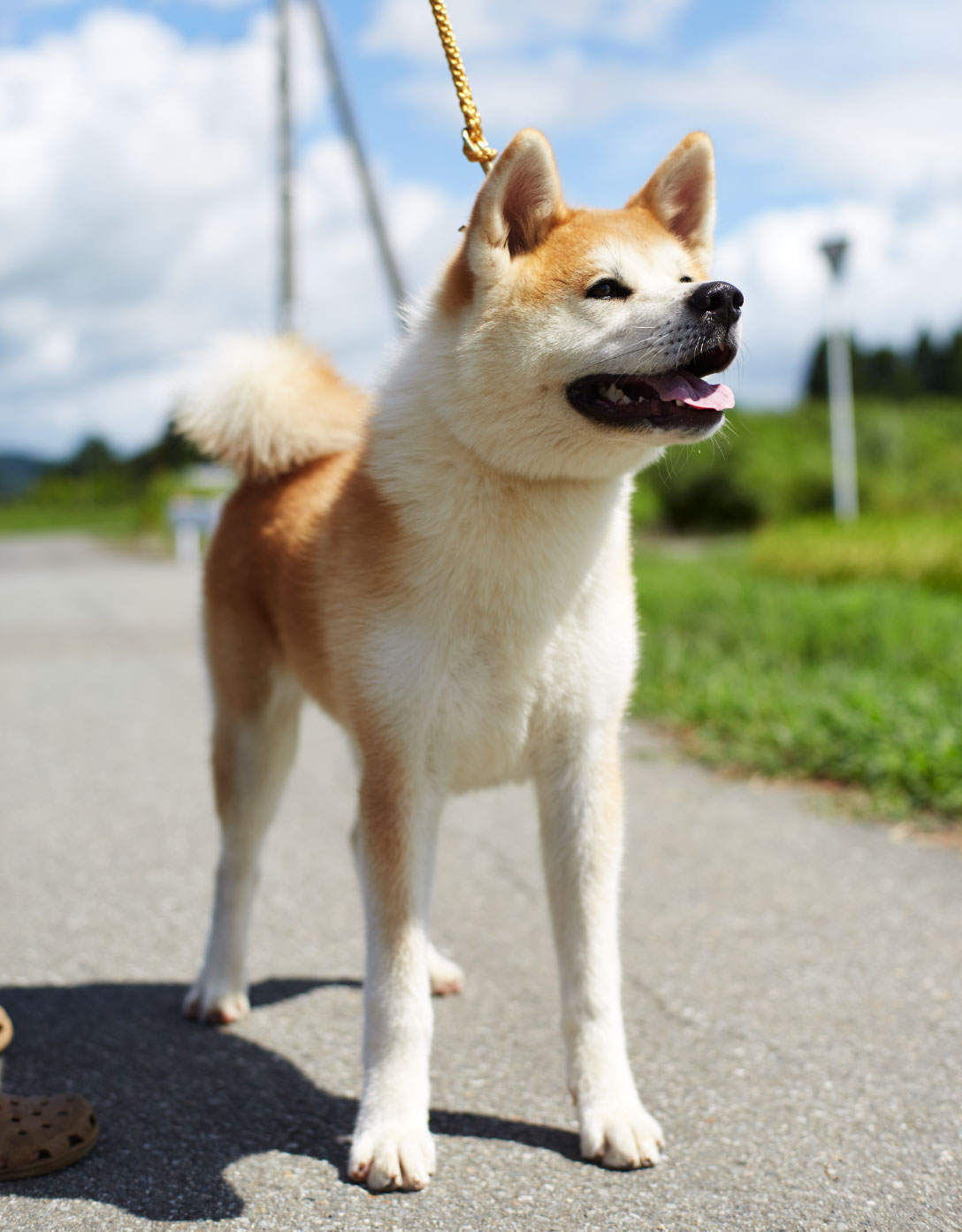 With its curled-up tail, its pointed ears that stand on end, and fluffy fur, the Japanese Akita is unmistakable! The dog is said to originate from Ōdate in the prefecture of Akita (from which it takes its name). And in Ōdate, which is also the hometown of the faithful dog “Hachikō” immortalized by a statue in Shibuya, Tokyo, and made famous by both a Japanese and an American movie, you can learn about the cuteness of the Akita. But not just the cuteness—its background, too.

Our first port of call was the Akita Dog Preservation Society Building. Here, they issue dog registrations and pedigree certificates. The building also houses a small museum which displays preserved materials related to the Japanese Akita. 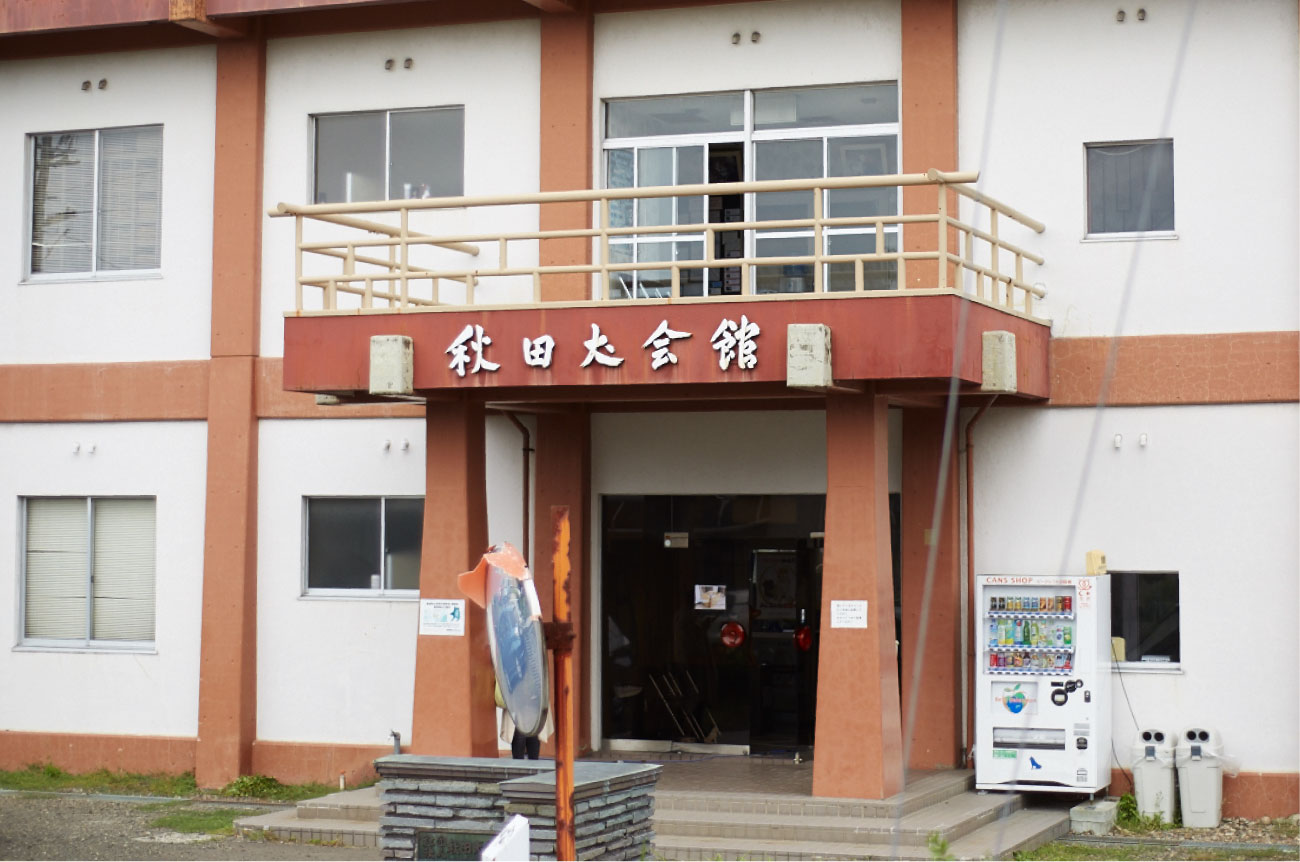 From April until late November, actual Akitas live on site. The day we went, there were three dogs—Natsuko, Yuki and Kurobē. When we got there, Yuki came to greet us full of charm at reception! We came to talk to Yasutami TOGASHI of the Akita Dog Preservation Society. 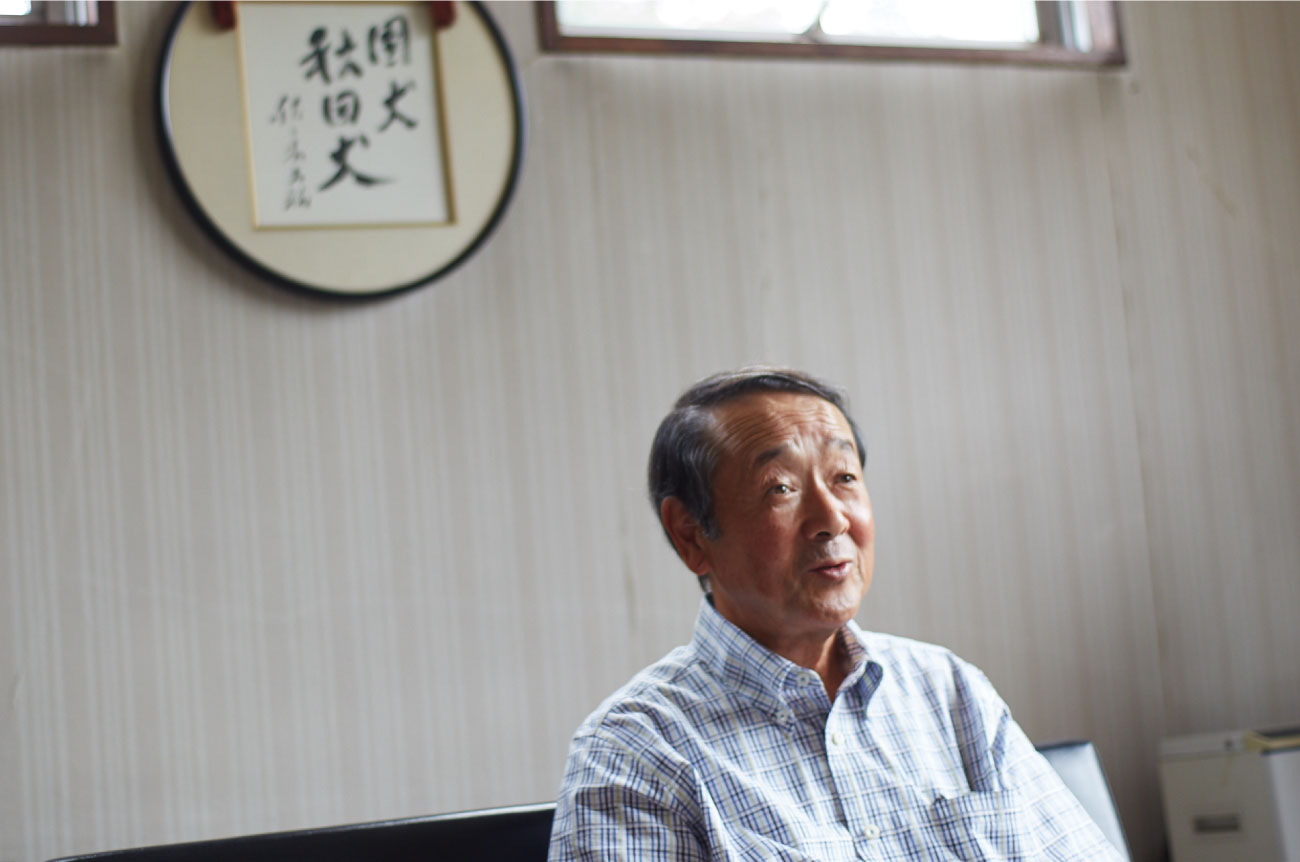 TOGASHI
Did you know that the first animal to be recognized as a Japanese natural treasure was the Akita?

TOGASHI
Yes, that’s right. At one time, when there wasn’t much in the way of fun around here, Akitas were part of the entertainment in the shape of fighting dogs. Also, when hunting was popular around here, in this area there was a local style of group hunting called Matagi, and some Akita dogs were kept as hunting dogs. But in fact, Akitas used to lose to Tosa fighting dogs all the time and so they say that actually Akita dogs were not really suited for fighting. But still, there was a feeling that they needed to make a dog that Ōdate could be proud of and so in 1927, the Akita Dog Preservation Society was formed. And then a few years later, there was a growing movement to make the Akita a national treasure. It was hard work, but they managed it!

YABUKI
Oh, I see. So what would you say in the first place are the special characteristics of the Akita?

TOGASHI
Its curled-up tail, pert pointed ears, its graceful stance and behavior, its obedience… Sometimes, people say that the Akita is scary, but that’s just not true. Well, they do have a hidden fighting spirit, I guess. 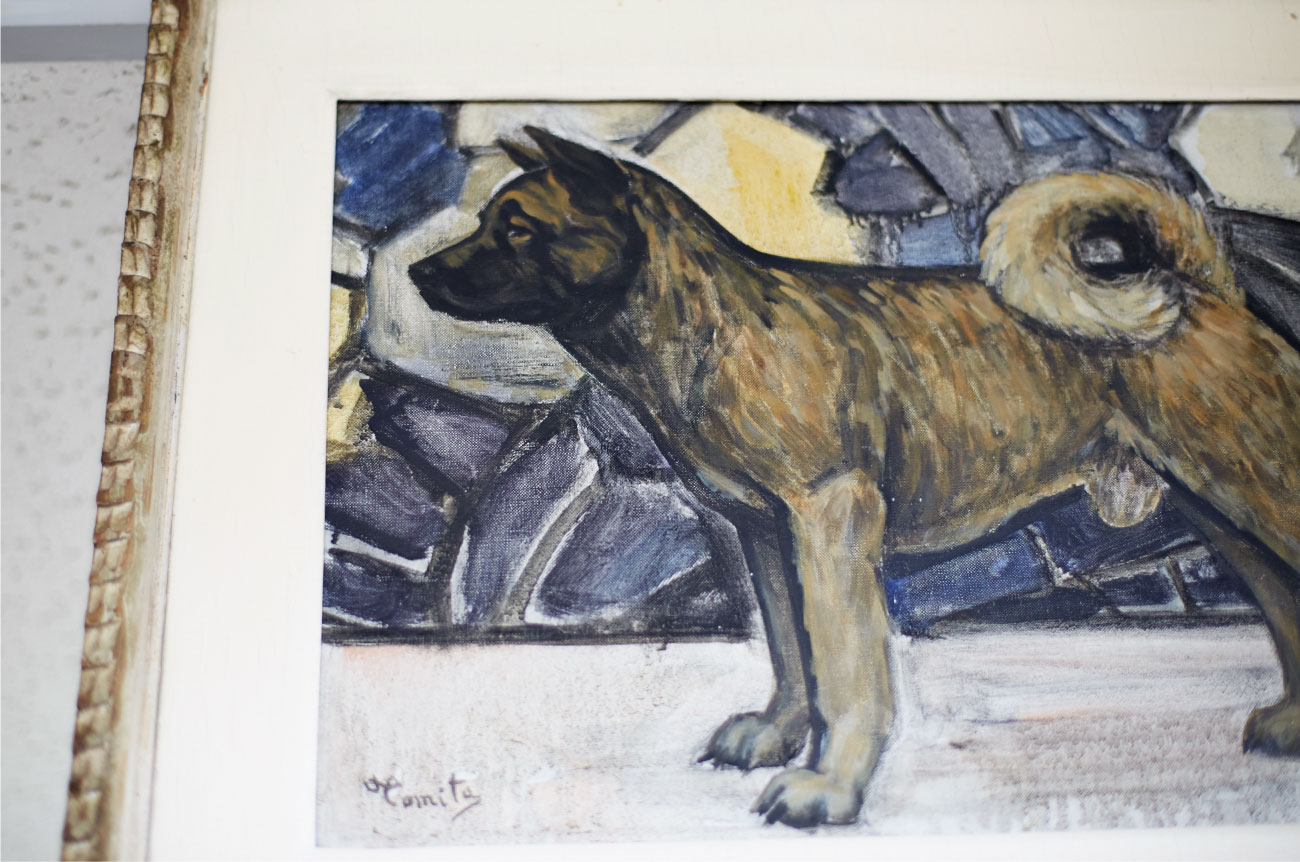 YABUKI
Yes, I think so too. And they come in all sorts of colors…

TOGASHI
Brown ones we actually call “Aka”(Red), black ones are called “Tora”(Sesame), and then there’s the “Shiro”(Pure white). Those are the basic types. And they once used to be known as Ōdate dogs rather than Akita.

TOGASHI
They thought that “Akita” (because of the prefecture) was easier to remember and so easier to get everyone in Japan to know the dog. And so they became “Akita dogs”.

YABUKI
Oh, I didn’t know that!

TOGASHI
Next year will be the ninetieth anniversary of the foundation of the Akita Dog Preservation Society. Now, we have 49 branches throughout Japan, and twelve clubs around the world. Still, our membership is now down to about 30% of what it was at our peak in 1972.

TOGASHI
Yeah. That’s because there aren’t really any new owners coming through. It’s hard work looking after large dogs. You have to exercise them in the mornings and evenings. You have to feed them well, and put them in a proper kennel. It takes time and effort. It’s so hard that people actually used to be employed as keepers for Akitas! 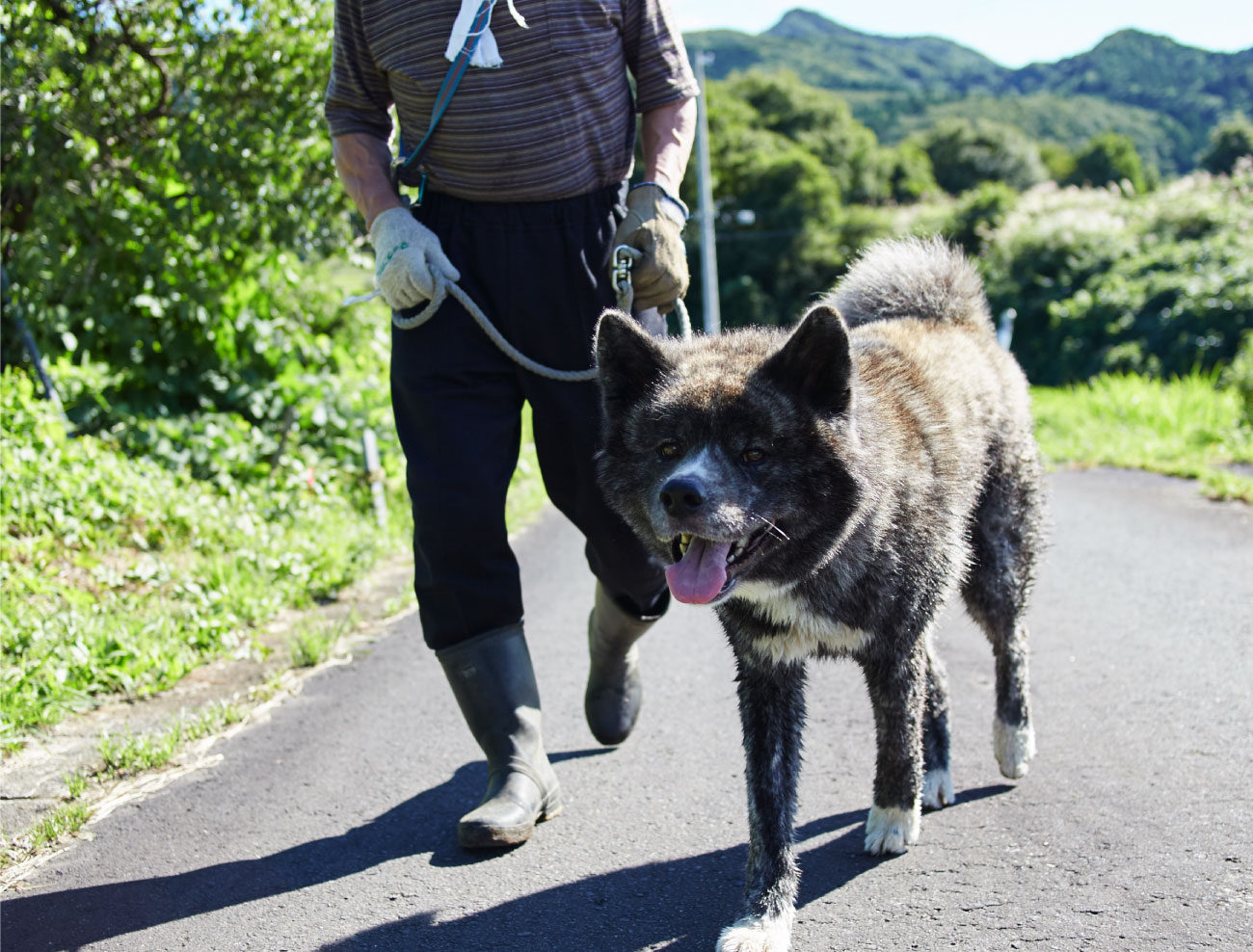 TOGASHI
But in today’s day and age, because it’s hard to look after a dog while working, people give up on it.

TOGASHI
Well, in spite of that we’re still doing our best. Because as you know, the dog Hachikō came from here in Ōdate. So we soldier on in the face of adversity.

YABUKI
There’s also a Hachikō statue at Ōdate station, just like the one in front of Shibuya station. In this town you see Akitas on buses, manhole covers, you name it! They’re everywhere! And in spring and fall, there’s an Akita dog show here in the breed’s birthplace. Is it some kind of national contest? 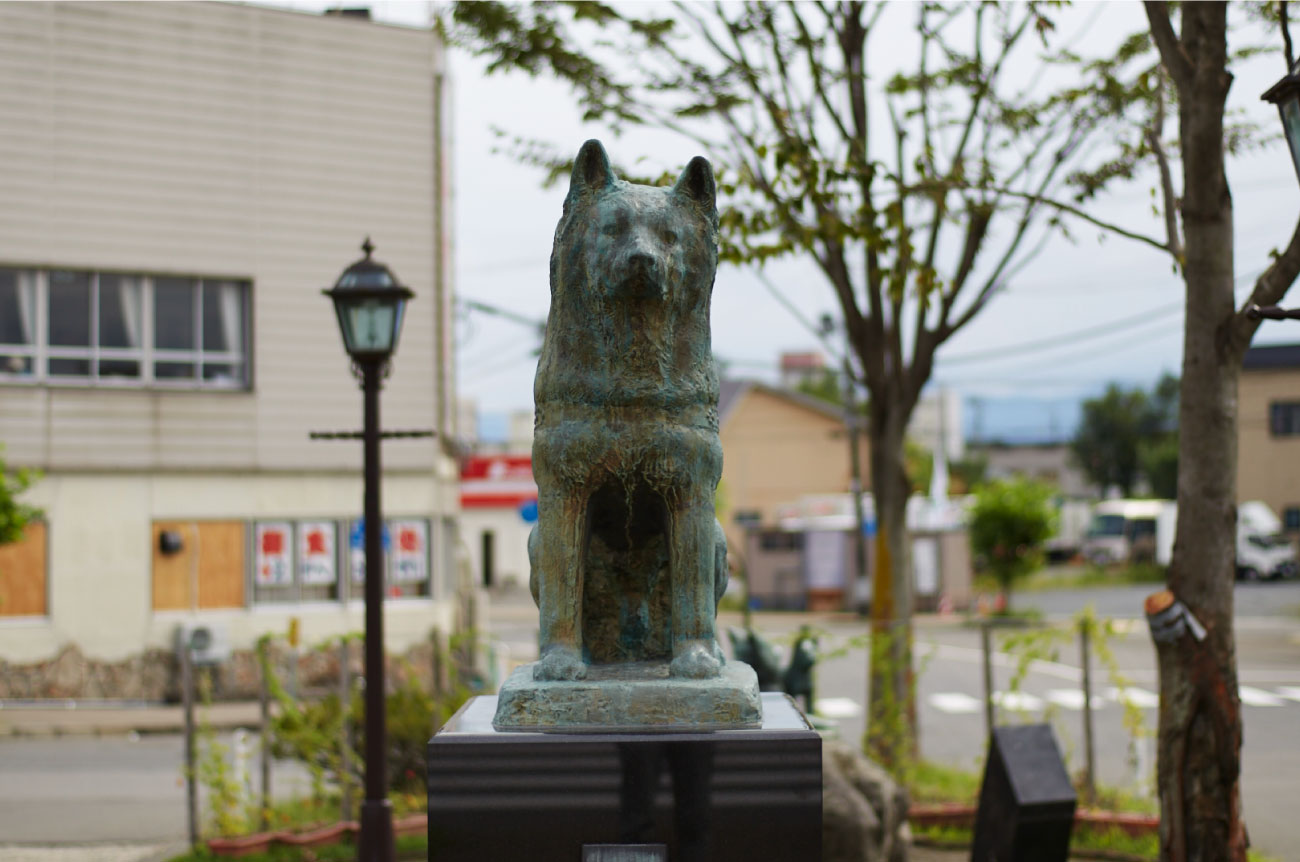 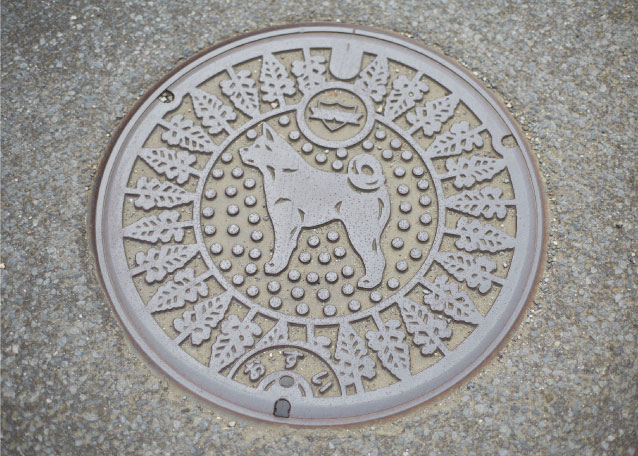 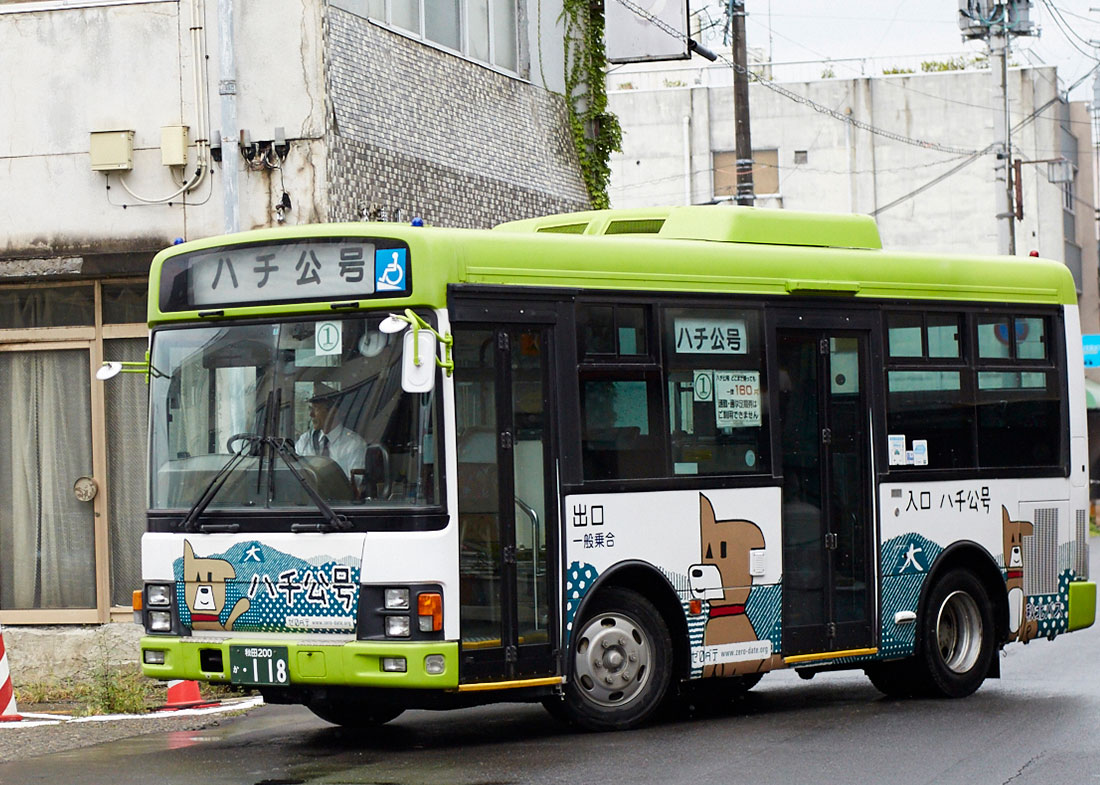 TOGASHI
Yes. Close to 200 Akitas from around the country come together and judging is based on about seventy different criteria. The competition takes place every year on May 3rd in Ōdate, and on the first Sunday in December outside of Akita Prefecture. This year, the event was going to be held in Kumamoto, but because of the earthquake, it’s going to be held in Tokyo instead.

YABUKI
So what kinds of dog end up winning the awards?

TOGASHI
One of the judging criteria is:
“Calm and dignified with a benign, faithful, obedient spirit, having a sense of rustic naivety, prestigious yet humble, with keen senses: displaying both alert courage and docility.”
There’s a special award given to 2-3 dogs per year. But some years, we don’t give out any special award. It’s not like giving out first and second place in an athletic meet. If a dog is not used to the judges, it just can’t behave well. The owners put them into all sorts of dog shows to get them used to it. There are even specialist “handlers” whose job it is to lead the dogs at the shows. 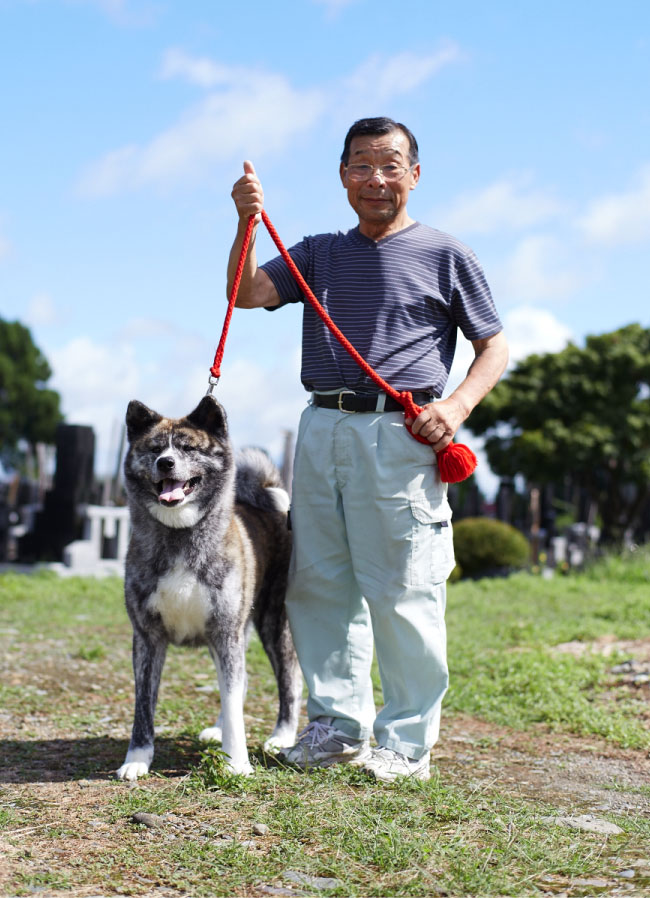 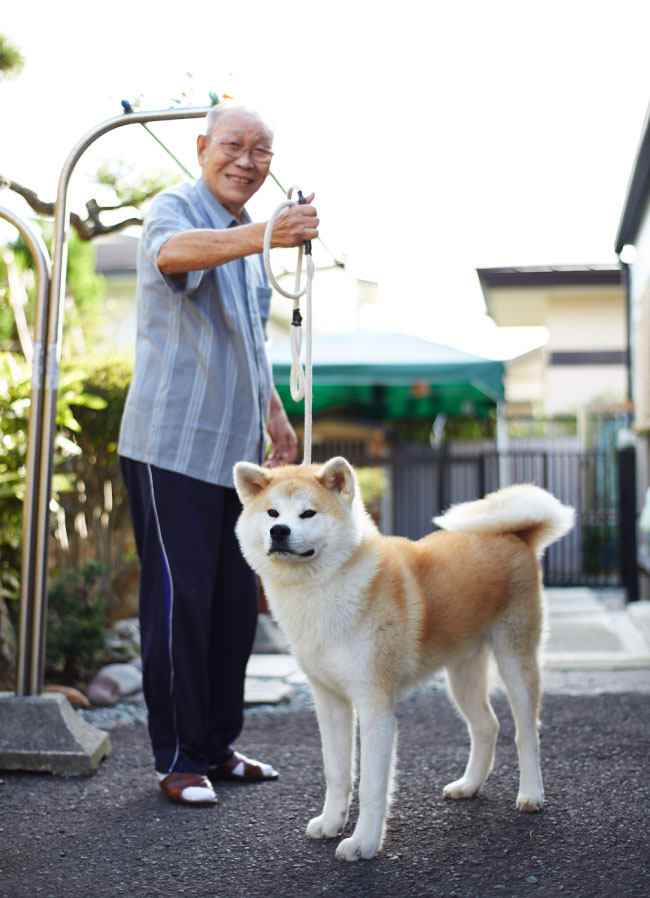 TOGASHI
Nowadays, the prefecture is also putting its efforts into promoting the dog. Now there are all sorts of events in Tokyo where you can get to know Akitas.

YABUKI
And don’t they even have Akitas welcoming visitors as they land at the Ōdate Noshiro Airport, on the 8th, 18th and 28th of every month? That must be getting quite a reaction from around the country! 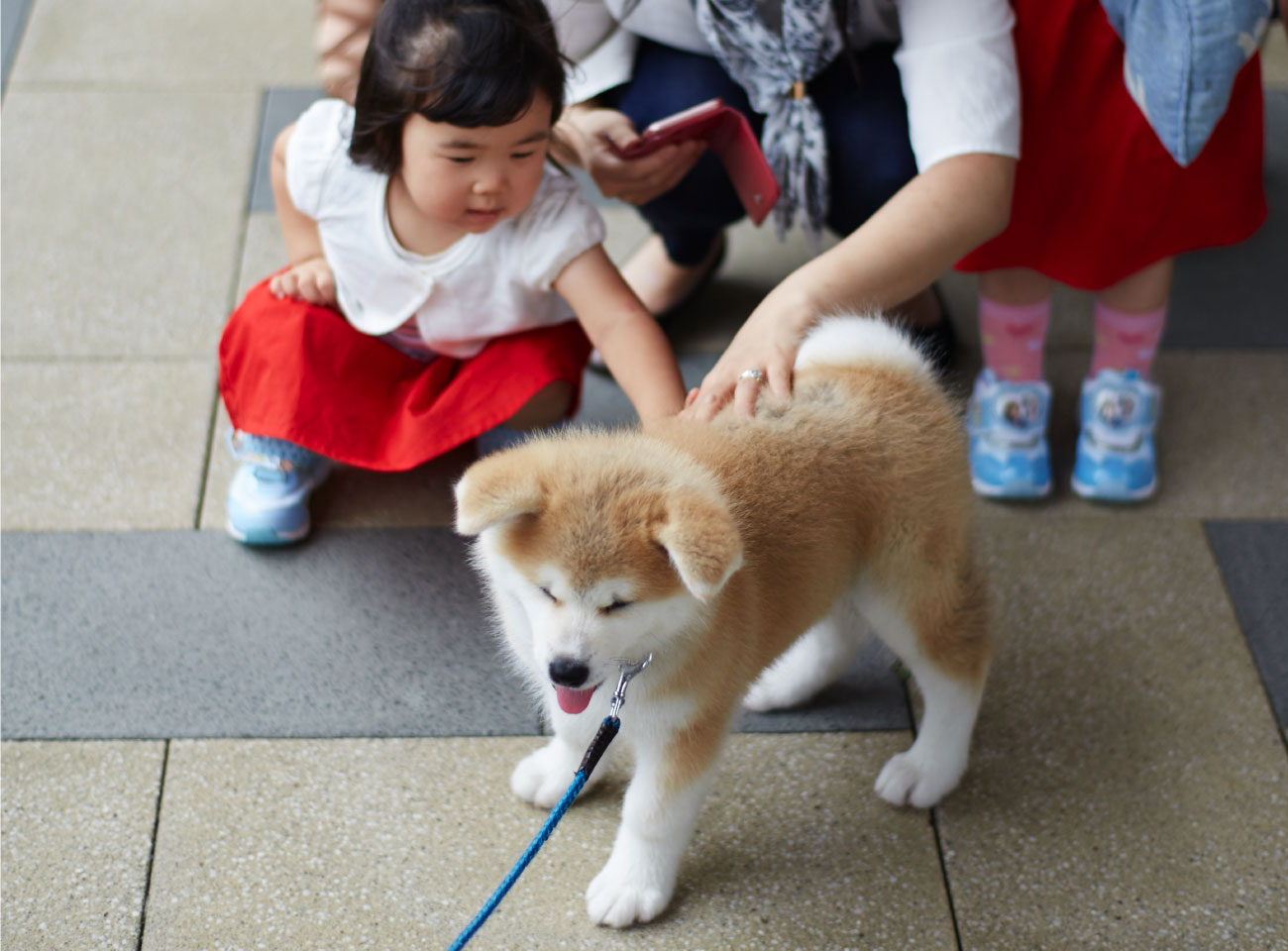 YABUKI
Three times! Wow! So it’s already very much associated with Japan then!

TOGASHI
When they say “Akita”, they don’t think of the prefecture, they think of the dog. It might just be a flash in the pan, but we’re thinking about how to increase the numbers of Akitas, and how that can contribute to making this area more active… But even so, we can’t just increase the number of dogs. In Japan, everything is well looked after, but overseas… Overseas there are false pedigree certificates flying around, and people doing their own thing. Not even 10% of dogs are properly registered.

YABUKI
I’d love to be able to meet some people in Ōdate who own Akitas. Could you introduce me to anybody?

TOGASHI
Alright. How about Mr. Hatakeyama? He is the breeder who raised the dog “Yume” that was given to Russian president, Mr. Putin in 2012.

YABUKI
Wow! I would love to meet him. 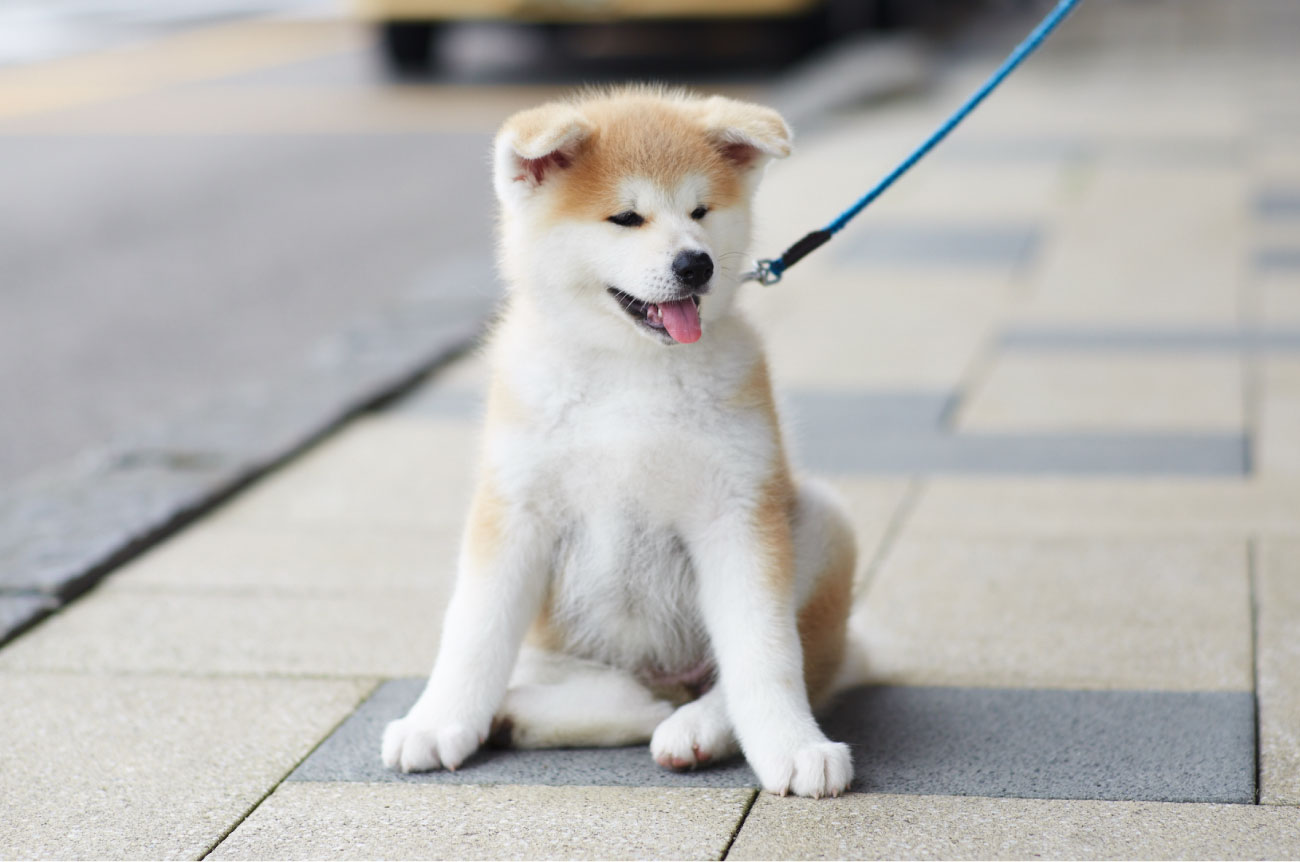