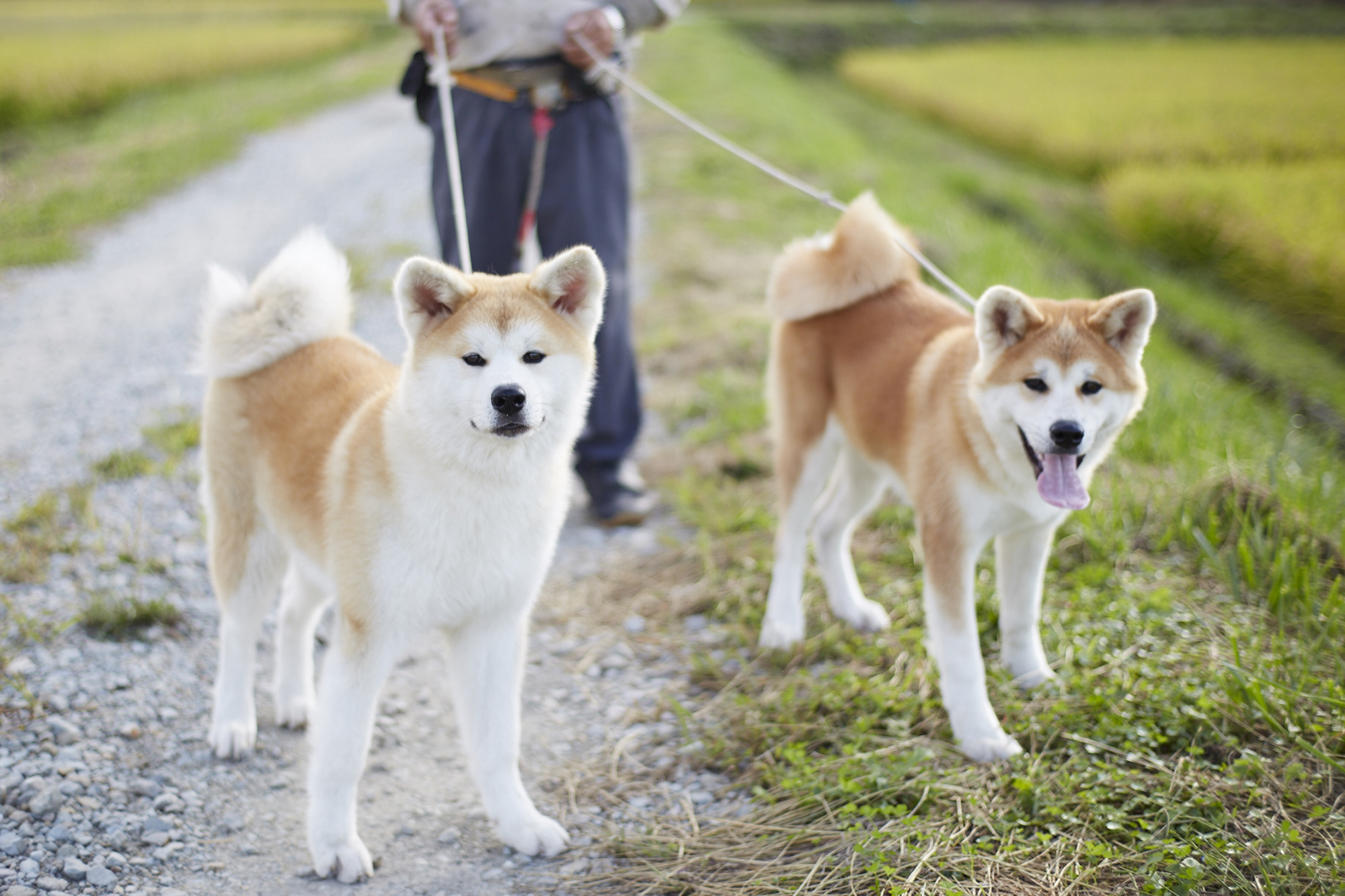 We’re now heading to the home of Mr. Hatakeyama, the breeder who was introduced to us by Mr. Togashi from the Akita Dog Preservation Society. As we get closer, walking towards us is a man with a dog, and two young ladies. 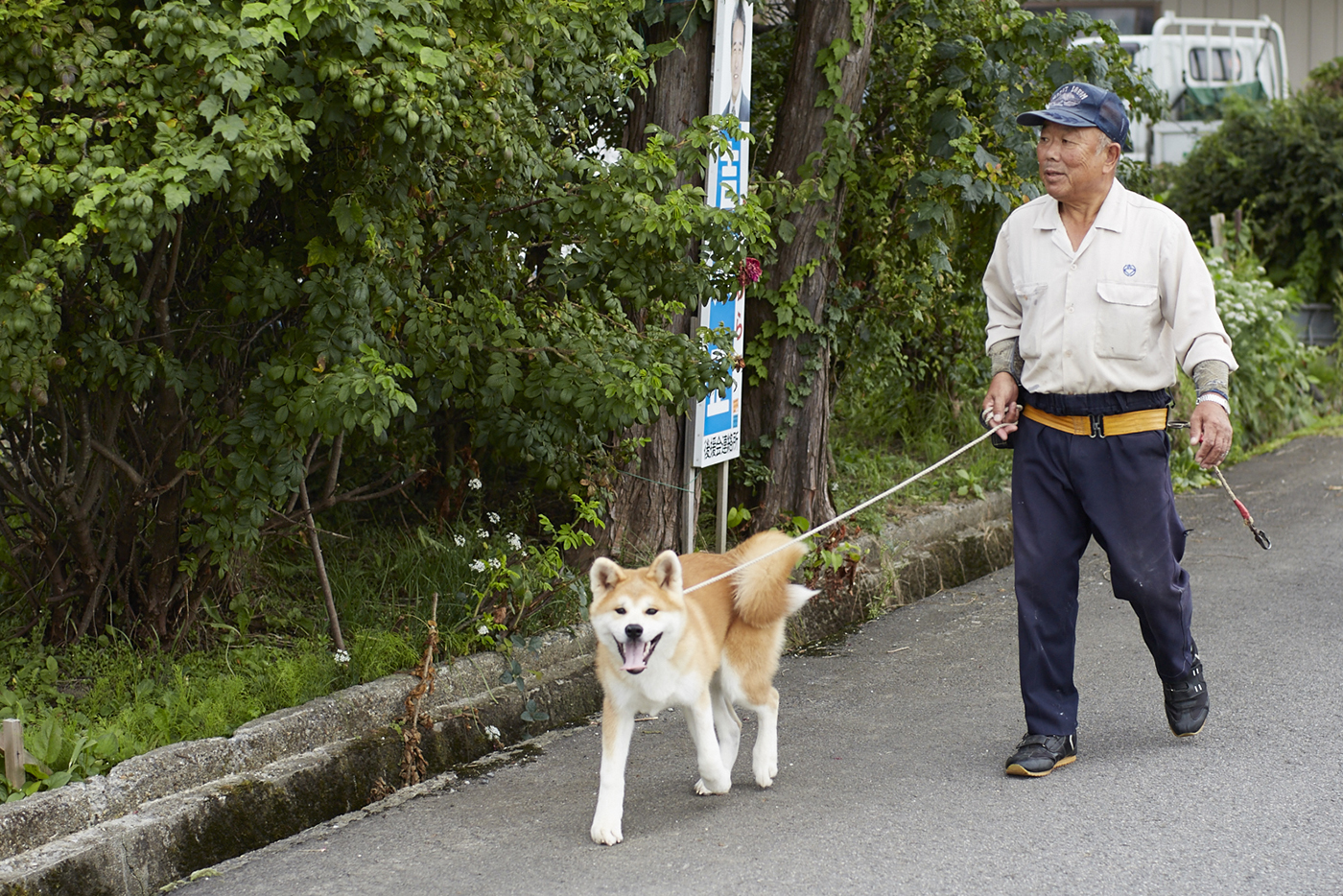 YABUKI
Hello! Are you Mr. Hatakeyama?

YABUKI
Are you off out on a walk?

HATAKEYAMA
Yes, that’s right. Are you the person who called earlier?

YABUKI
Yes! My name’s Yabuki. So, who are you two?

Women
We’re here to help revitalize Ōdate as a part of a nationwide government initiative. We’ve come to Mr. Hatakeyama’s house to learn about Akita dogs. 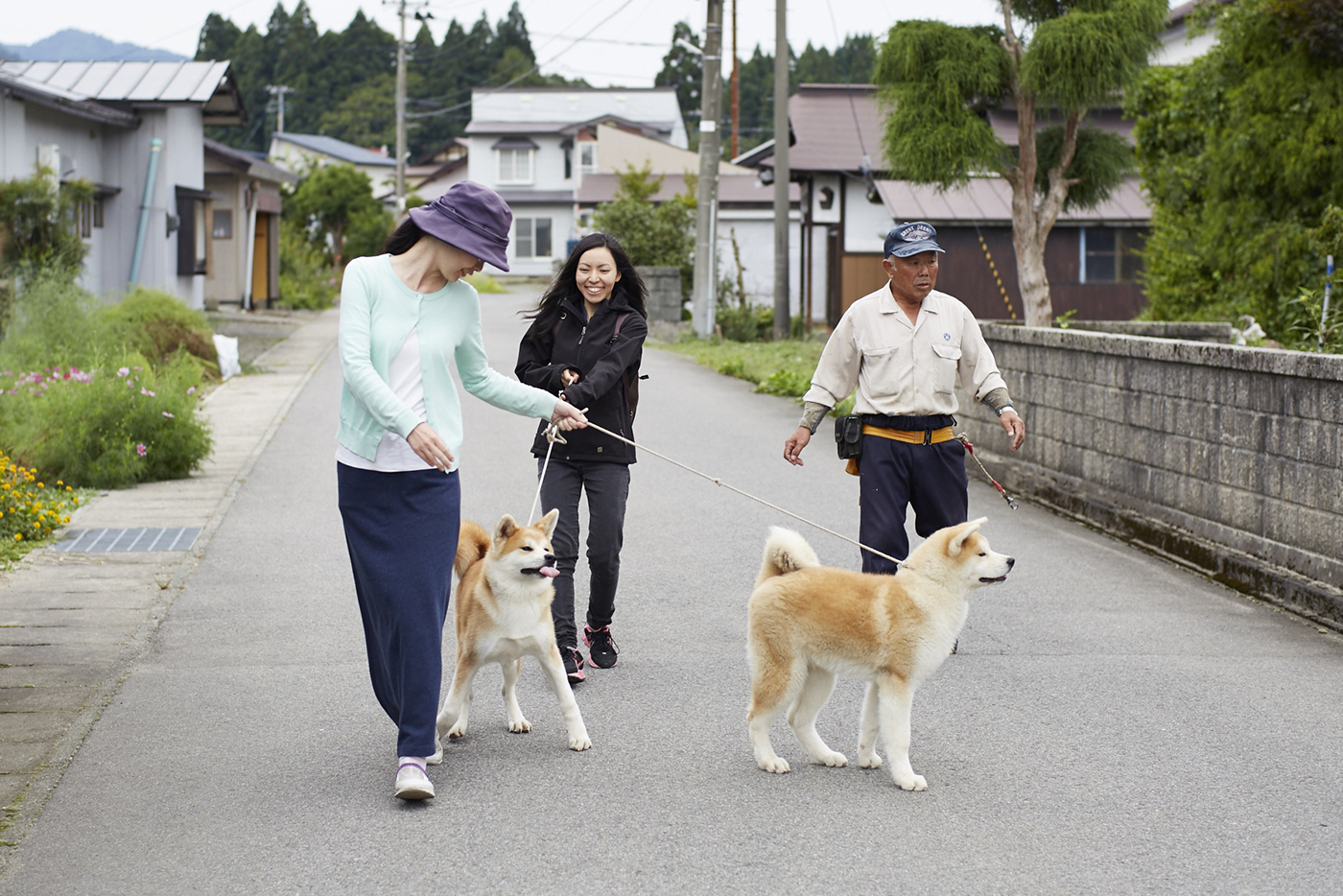 YABUKI
Oh! Do you mind if I walk with you?

HATAKEYAMA
Not at all! Please join us.

After walking around the block with everyone, we went in to Mr. Hatakeyama’s house to talk. 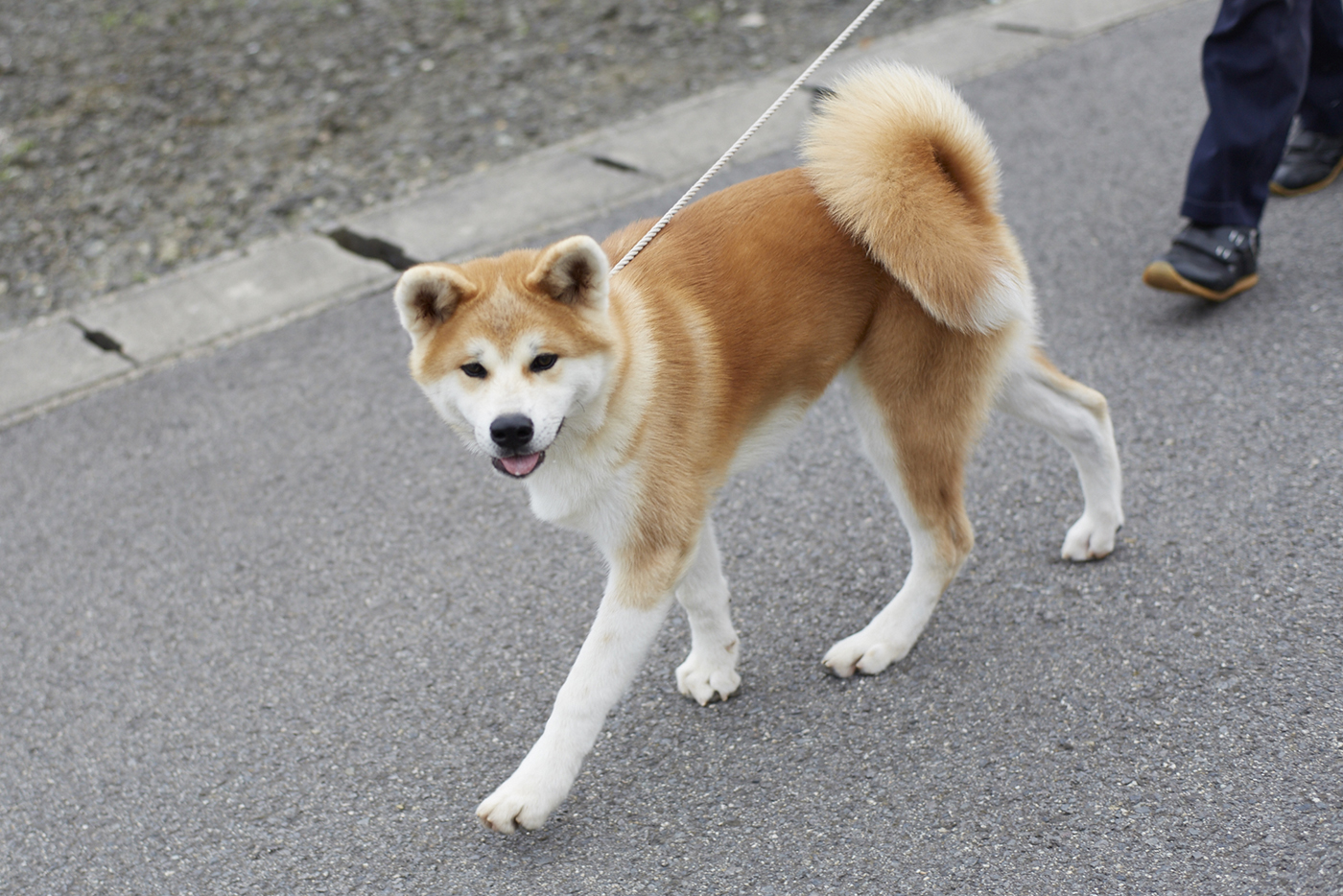 YABUKI
Mr. Togashi from the Akita Dog Preservation Society told me that you were the person who raised “Yume”, the dog that was given to Mr. Putin, the president of Russia in 2012.

HATAKEYAMA
That’s right. That dog over there is Yume’s mother.

YABUKI
Wow! That one?! When they decided on Yume, how did you feel?

HATAKEYAMA
At the time, three puppies were born here. One of them went to a town called Ugo nearby through a breeder. Then with the other two, one of the staff from the Preservation Society came over to take a picture and said “Somebody wants a puppy.” Two months passed and I didn’t hear another word about it.
“That’s strange!” I thought, and then there was an announcement at the presentation ceremony. That was the first I knew about it. 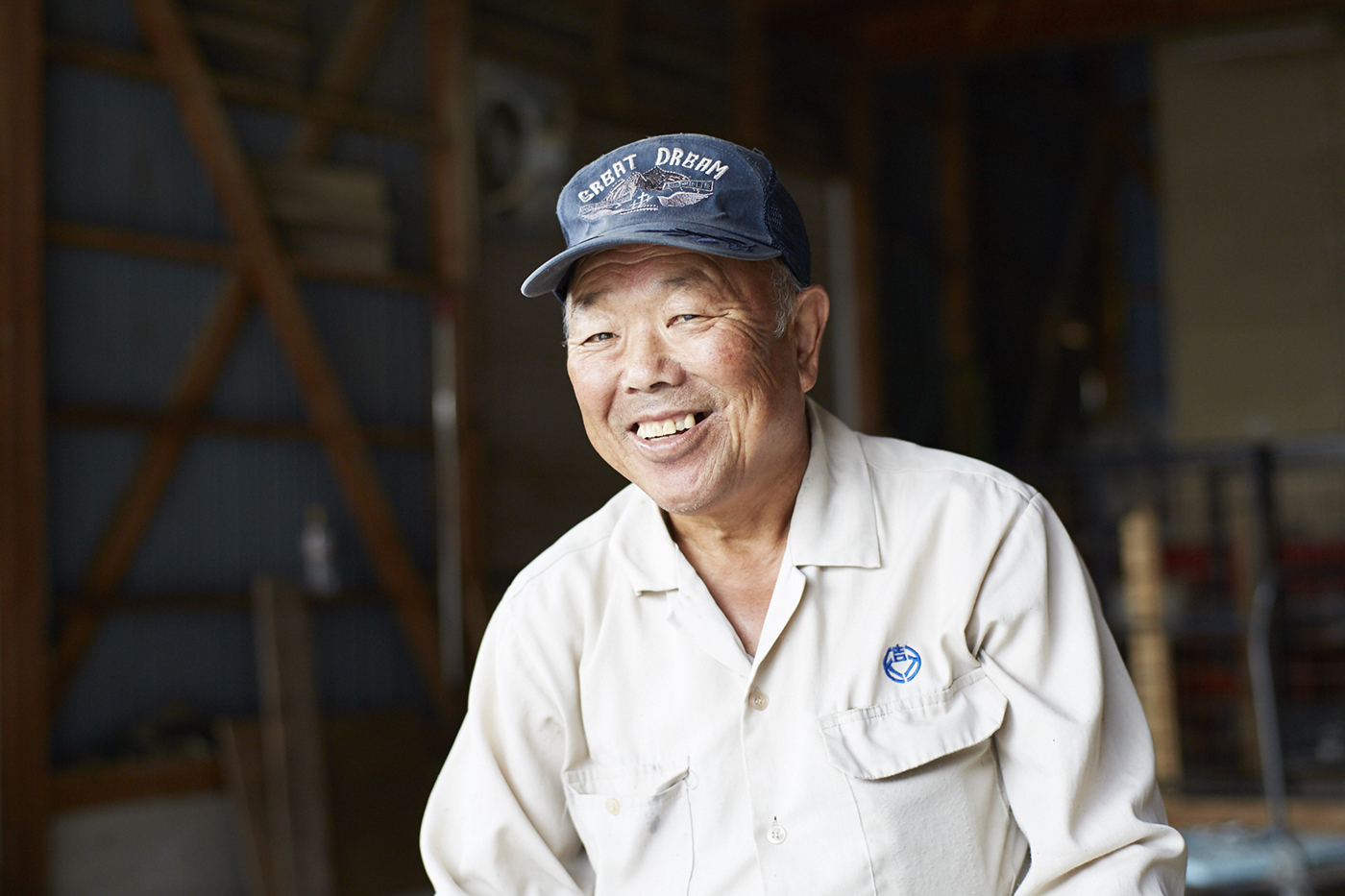 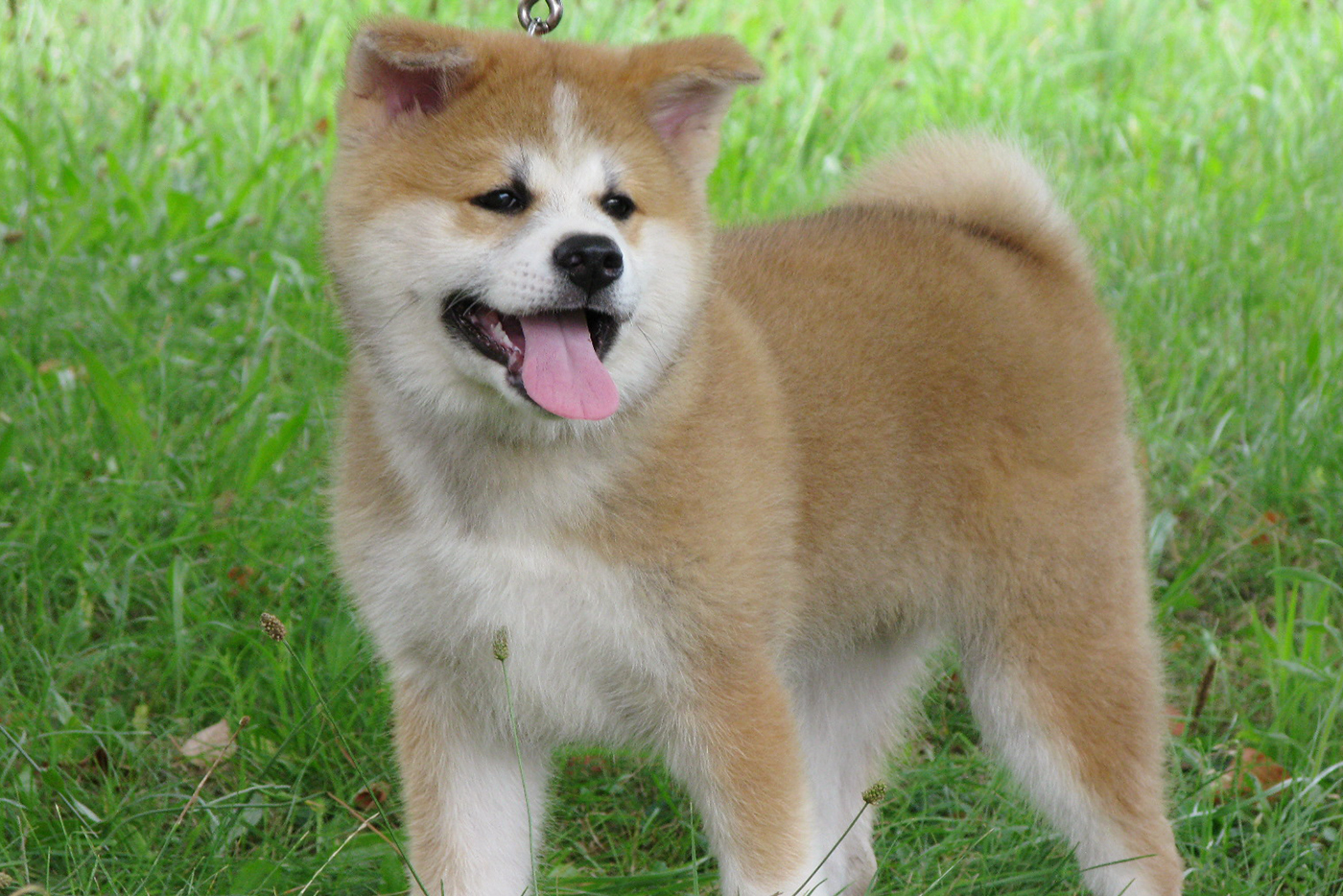 “Yume” – the dog given to President Putin

YABUKI
Huh?! They didn’t tell you about it until just before?

HATAKEYAMA
It’s because it was top secret. Even after that, I couldn’t tell the media that my dog was going. Imagine the fuss! Actually I was grateful for that. It would have been a circus dealing with all the reporters if it got out.

YABUKI
Yes, I think so. Even though you raised Yume, I guess you can’t see her In Russia…

HATAKEYAMA
Haha. She’s a member of the president’s family now!

YABUKI
I’m sure she’s being well looked after! 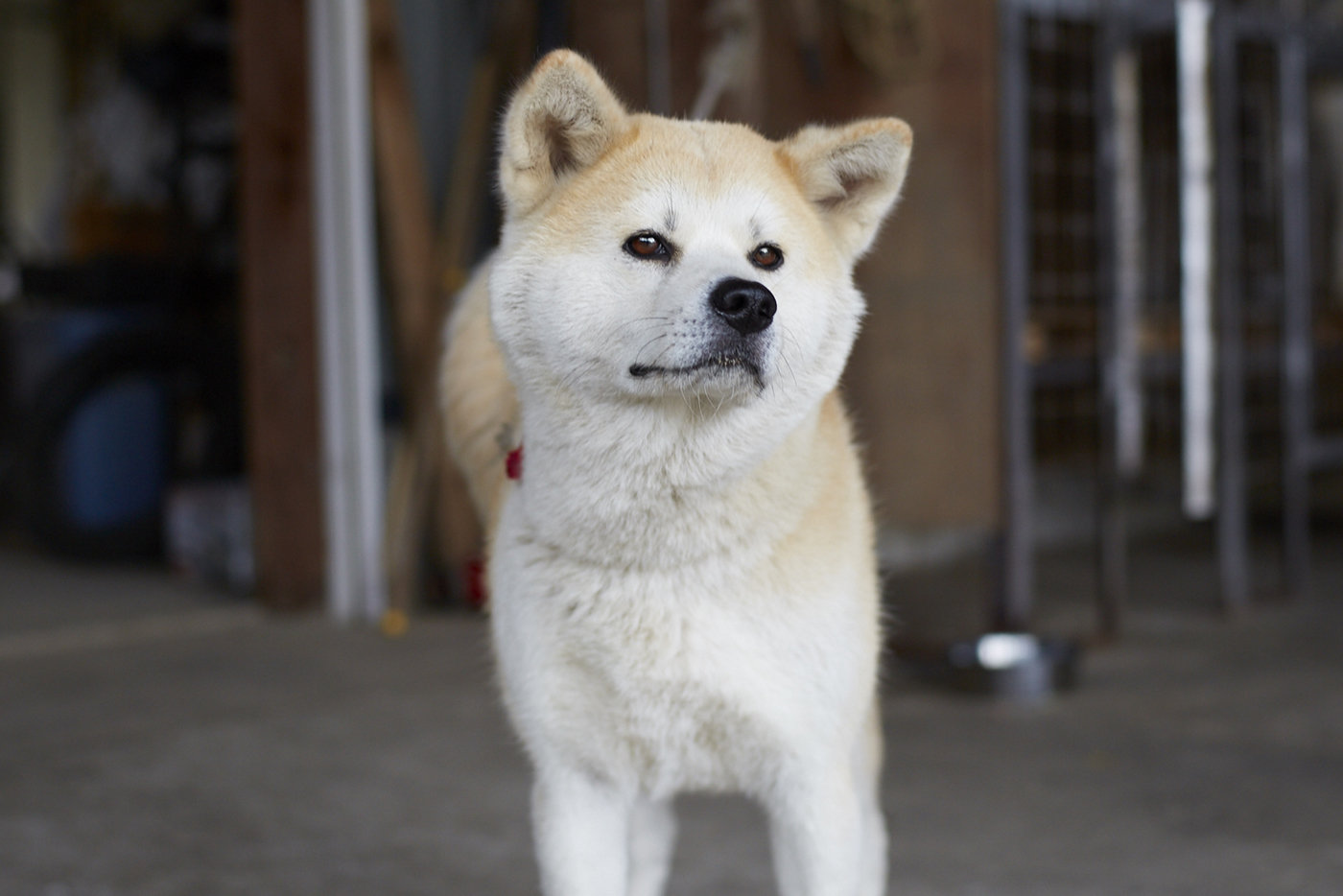 HATAKEYAMA
Haha! I’m sure she’s really, really happy! No one can just walk in to that kind of place.

YABUKI
That’s right! But, Mr. Hatakeyama, you’re related to her. Haha! So I guess she was a good dog, then?

HATAKEYAMA
Actually, she had quite sensitive skin. She was prone to rashes. I bought some medicated shampoo from the vet, and had to wash her quite often. Eventually it cleared up and she had beautiful skin.

YABUKI
I’m sure she was all the cuter for it! Did you feel like the father of the bride before she went away?

HATAKEYAMA
Yeah! Especially with all the TLC. Haha! She was three months and two days when she went to Russia. Just as her cuteness was coming out! 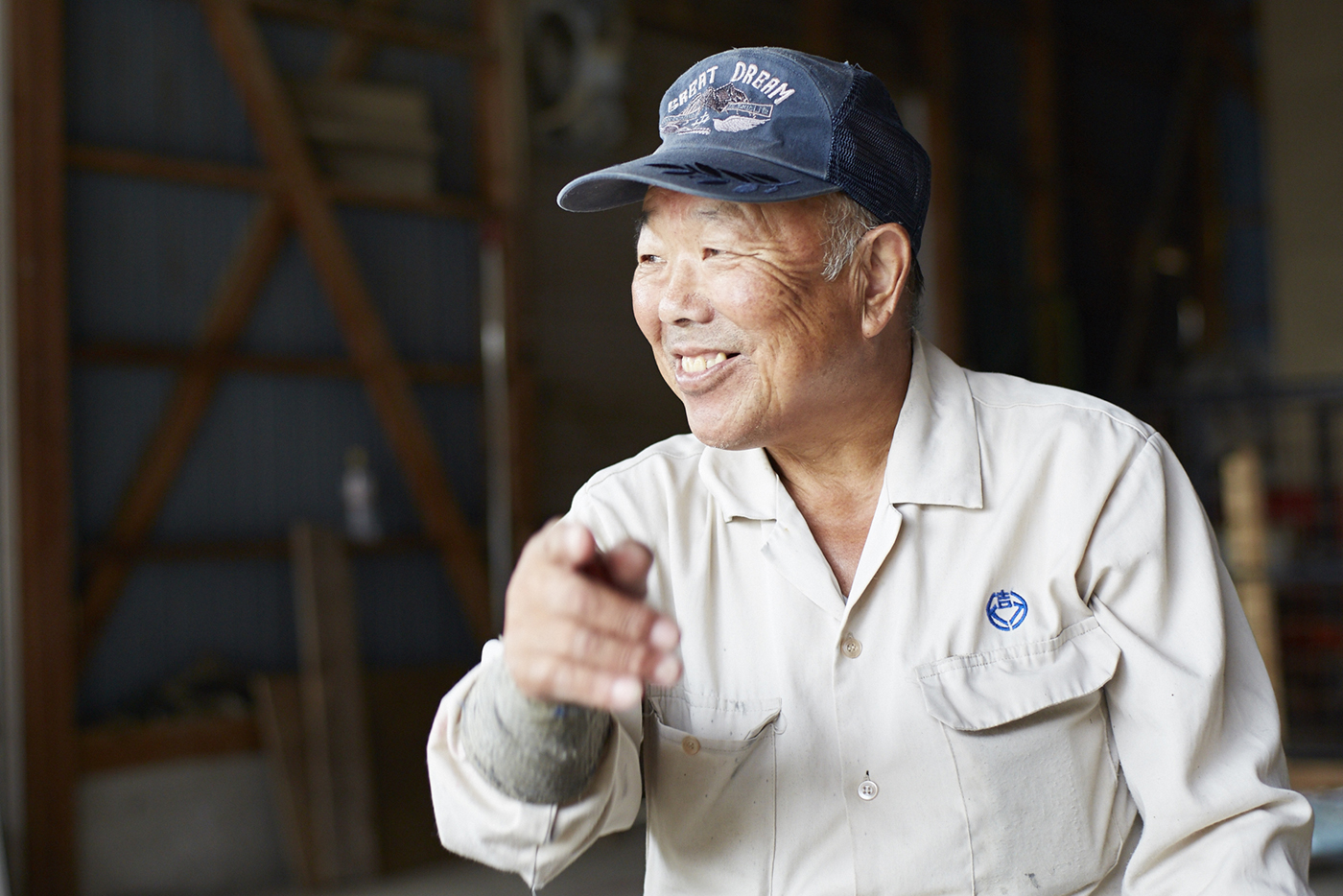 YABUKI
Oh, and just then she had to head off to Russia!

HATAKEYAMA
It was beyond my wildest dreams! Hahaha!

YABUKI
Ah, I get it… Yume is Japanese for “dream”.
So, how long have you been a breeder, Mr. Hatakeyama?

HATAKEYAMA
It’s been nine years since I really started. I used to do some farming while I worked on my job digging tunnels. But at my age, tunneling is really hard work, and so I started looking after doggies! 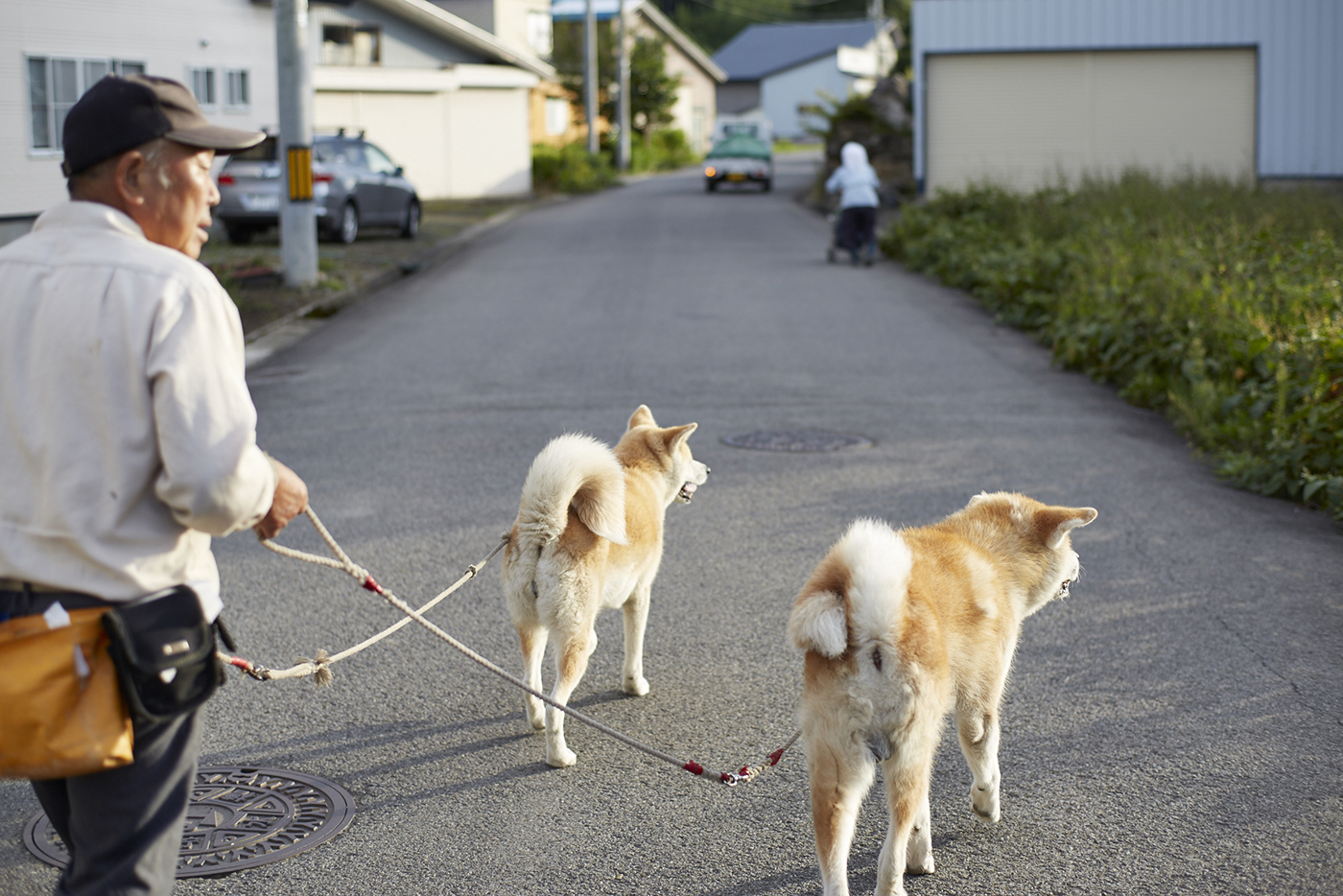 YABUKI
Did you like looking after dogs from the beginning?

HATAKEYAMA
Yes. I’ve had all kinds of dogs. But Akitas are definitely the best.

YABUKI
How are they different?

HATAKEYAMA
You just never get tired of them! I’ve had a German Shepherd, a Pointer, Shiba… Even though they’re all dogs, the Akita is just the best!

YABUKI
You never get tired? What do you mean?

HATAKEYAMA
How can I put it? They’re affectionate and they’re friendly. 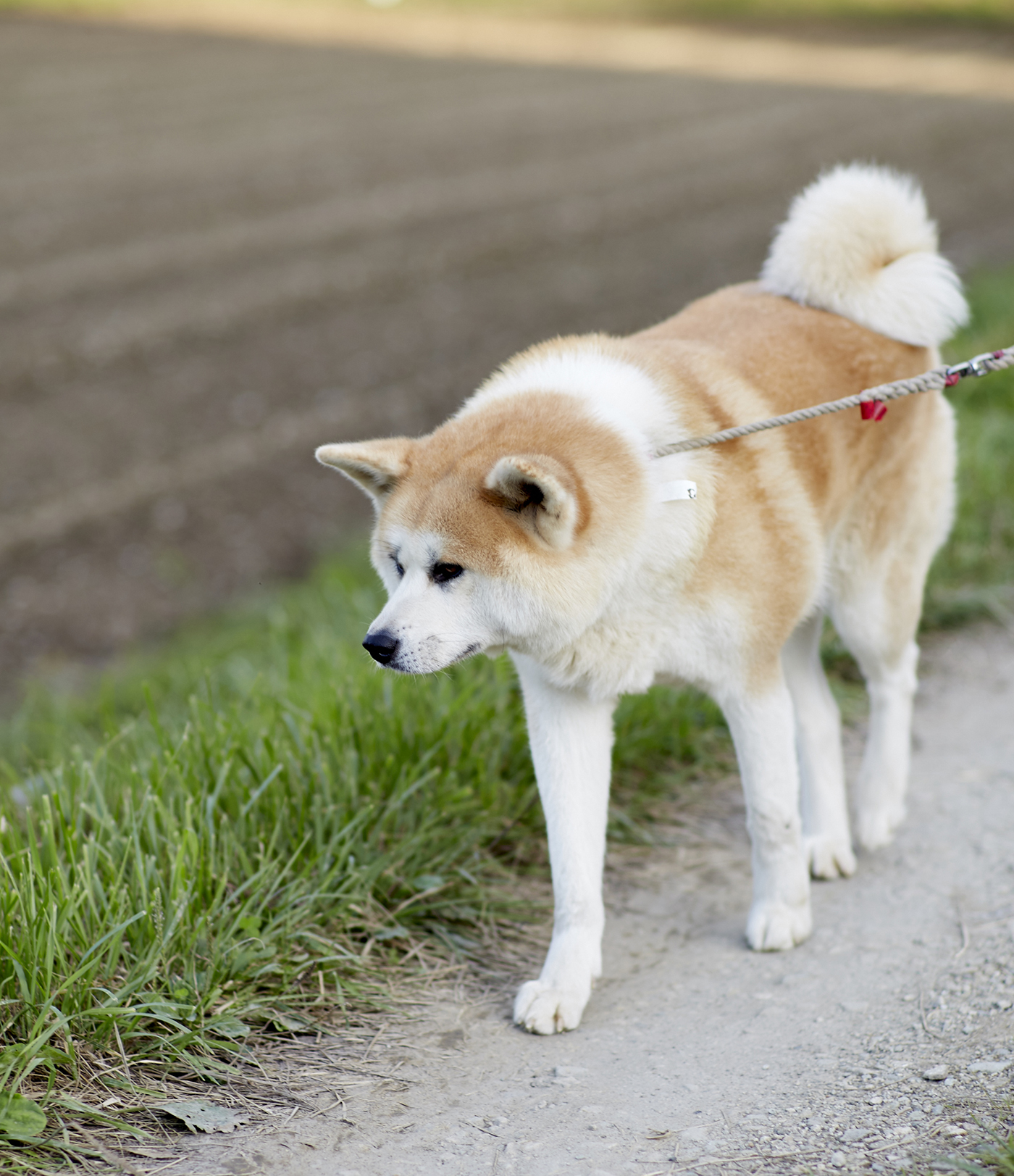 YABUKI
So you can live with and raise them together?

HATAKEYAMA
Yep. They’re kind of relaxing to be around. That’s the main thing. That’s Akitas for you!

YABUKI
But in nine years, surely you must have had a lot of difficulties?

HATAKEYAMA
No. But anyway, I love them. If I didn’t I wouldn’t be able to own these dogs.

YABUKI
So now you have five. Do you have plans to let them out into the world?

HATAKEYAMA
So these ones are to have puppies, and these go to dog shows.

YABUKI
Oh, I see. So have they been getting good results?

HATAKEYAMA
No, not really! Haha!

HATAKEYAMA
The dogs in the Tokyo area and the Osaka area are really amazing. And they’ve all got a good pedigree.

YABUKI
But as your dog went to Mr. Putin, surely everyone comes knocking on your door for the same pedigree?

HATAKEYAMA
Her (Yume’s mother’s) pups went straight out the door! 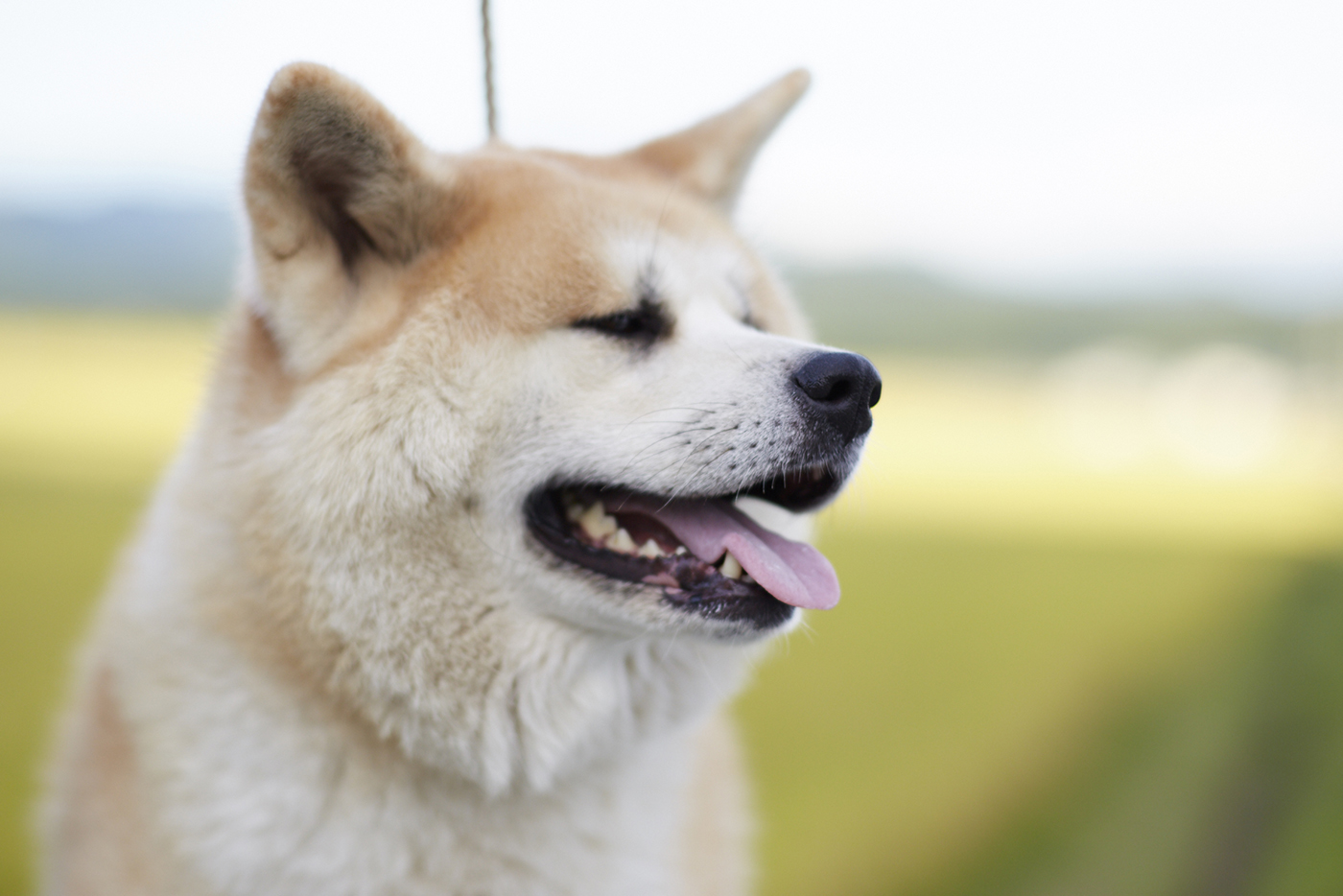 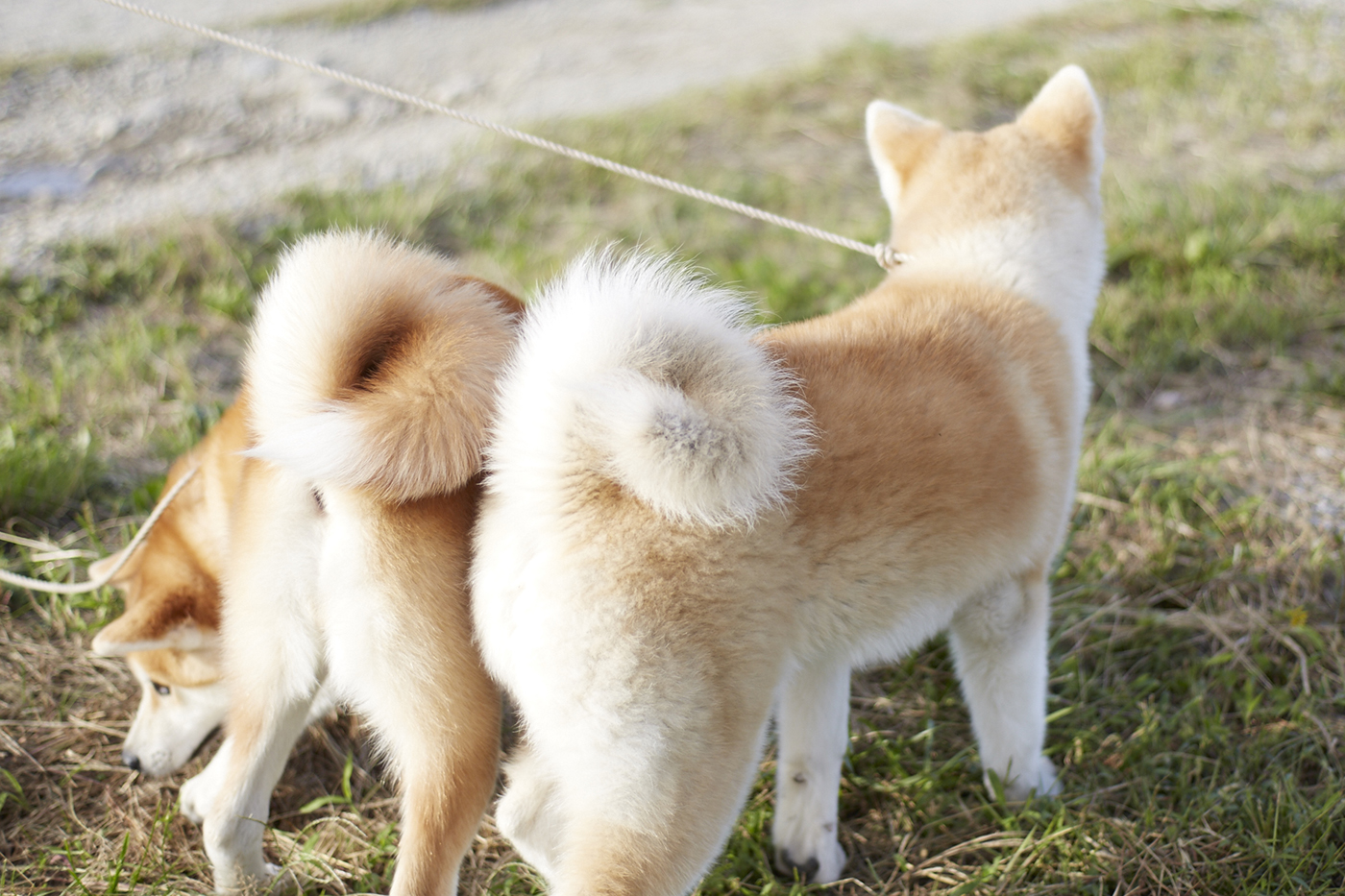 YABUKI
So what kinds of things are you teaching the revitalization initiative members?

HATAKEYAMA
How to walk the dogs and give them food. That sort of thing.

YABUKI
So as you’re going to keep on raising dogs, people come to you quite often for advice then? 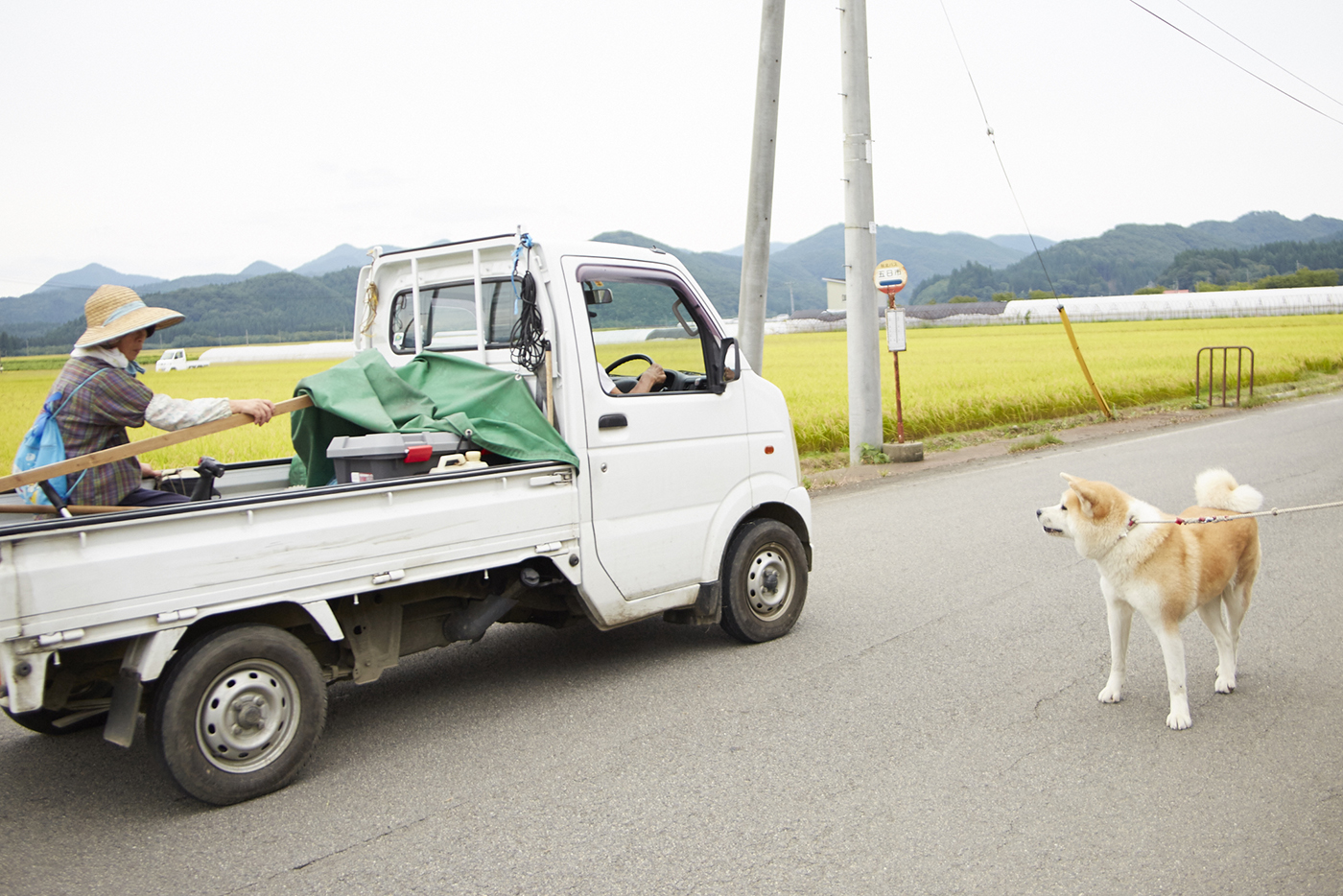 HATAKEYAMA
No, I wouldn’t really say that. Those girls also have to do some things for city hall while looking after the dogs. So I think it’s quite hard work.

YABUKI
Yeah, I think so. Ōdate is a new place for them, and they have to take the dogs around here and there, too. So what advice would you have for those women and for anyone thinking of getting an Akita?

HATAKEYAMA
First and foremost, don’t let them miss their walks! 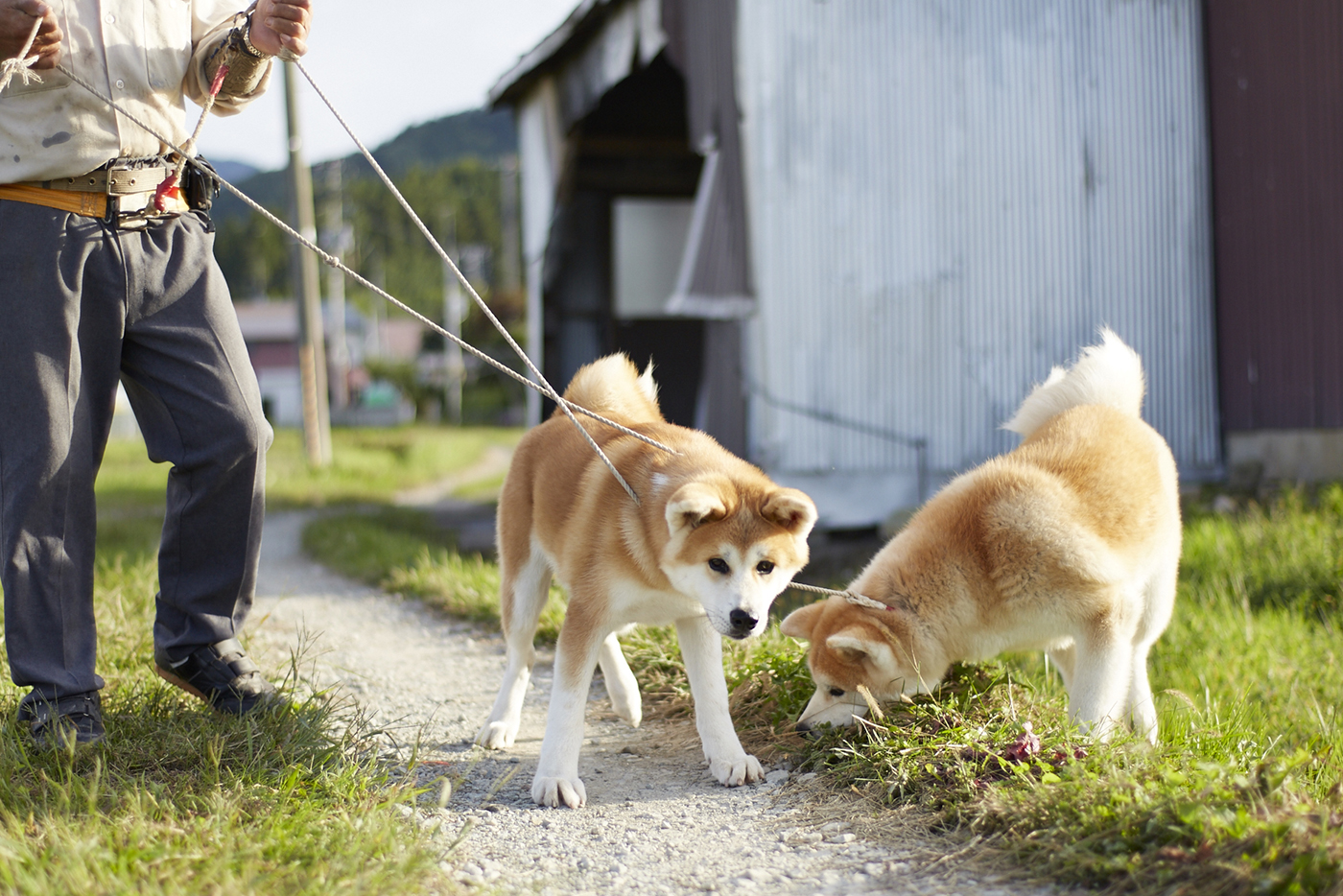 YABUKI
Is that so they can get exercise, and so that you can communicate with the dog…?

HATAKEYAMA
Yeah. If you do that, the dog will become docile and friendly.

YABUKI
You mean just by walking with them? 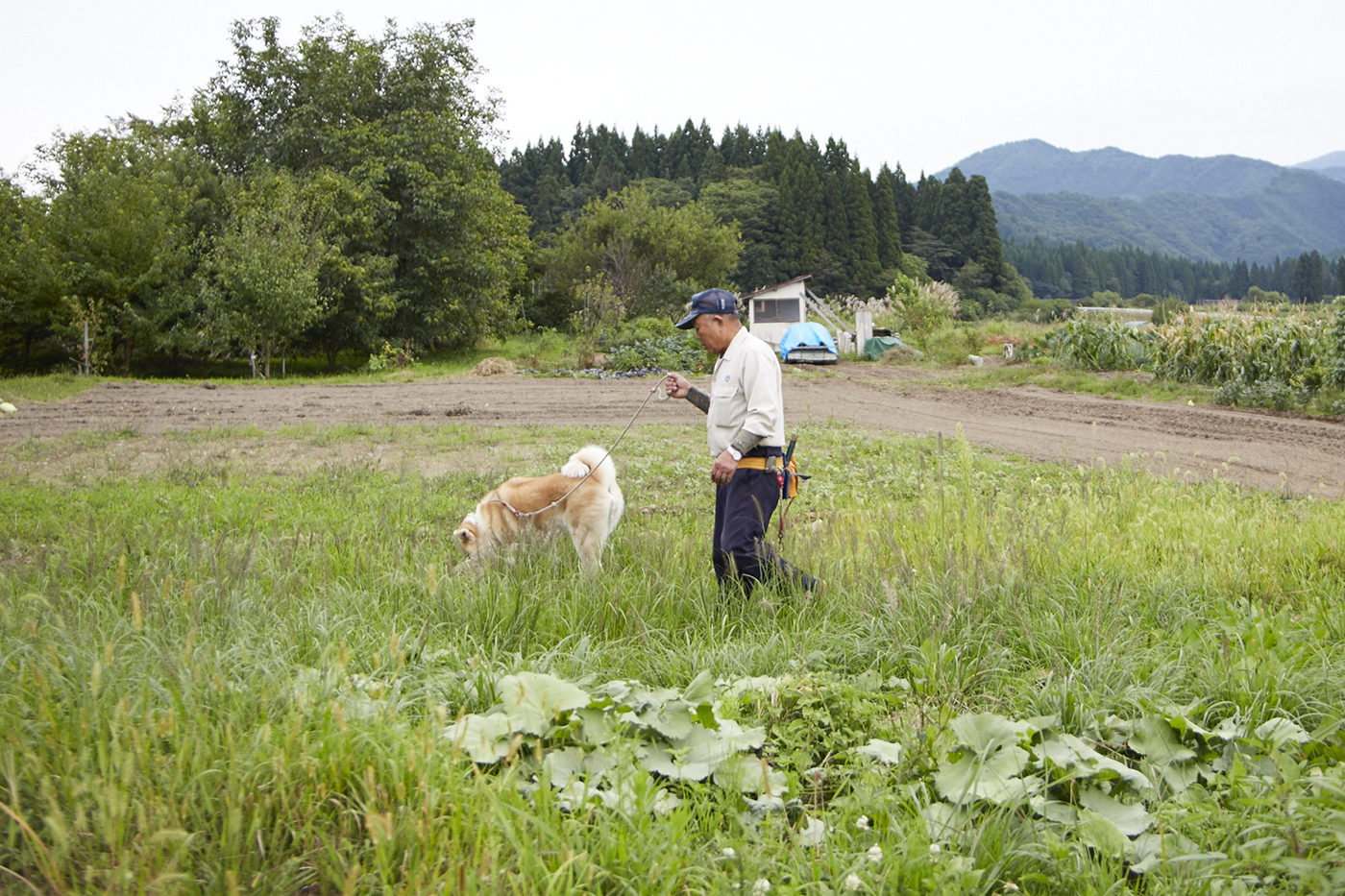 YABUKI
So, is it right that you’re all looking after puppies as part of the initiative? I’d love to be able to see one. Is that possible?

She confirmed it would be OK. Then a few days later when meeting with the other members of the initiative, I was able to see the puppies. Next time, I will share a report on their activities and about how they are getting on. 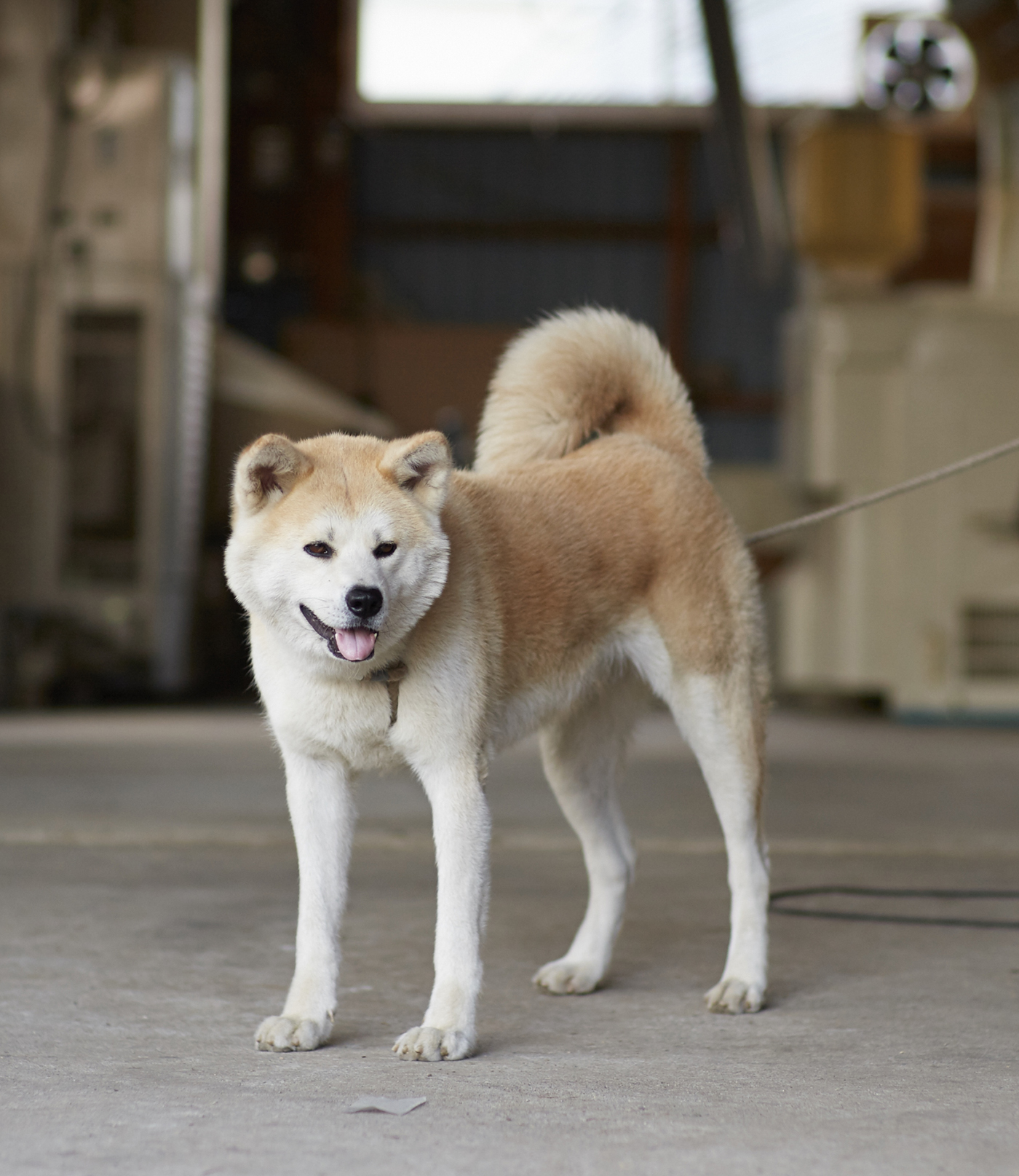 3. Dogs that help with local revitalization >>