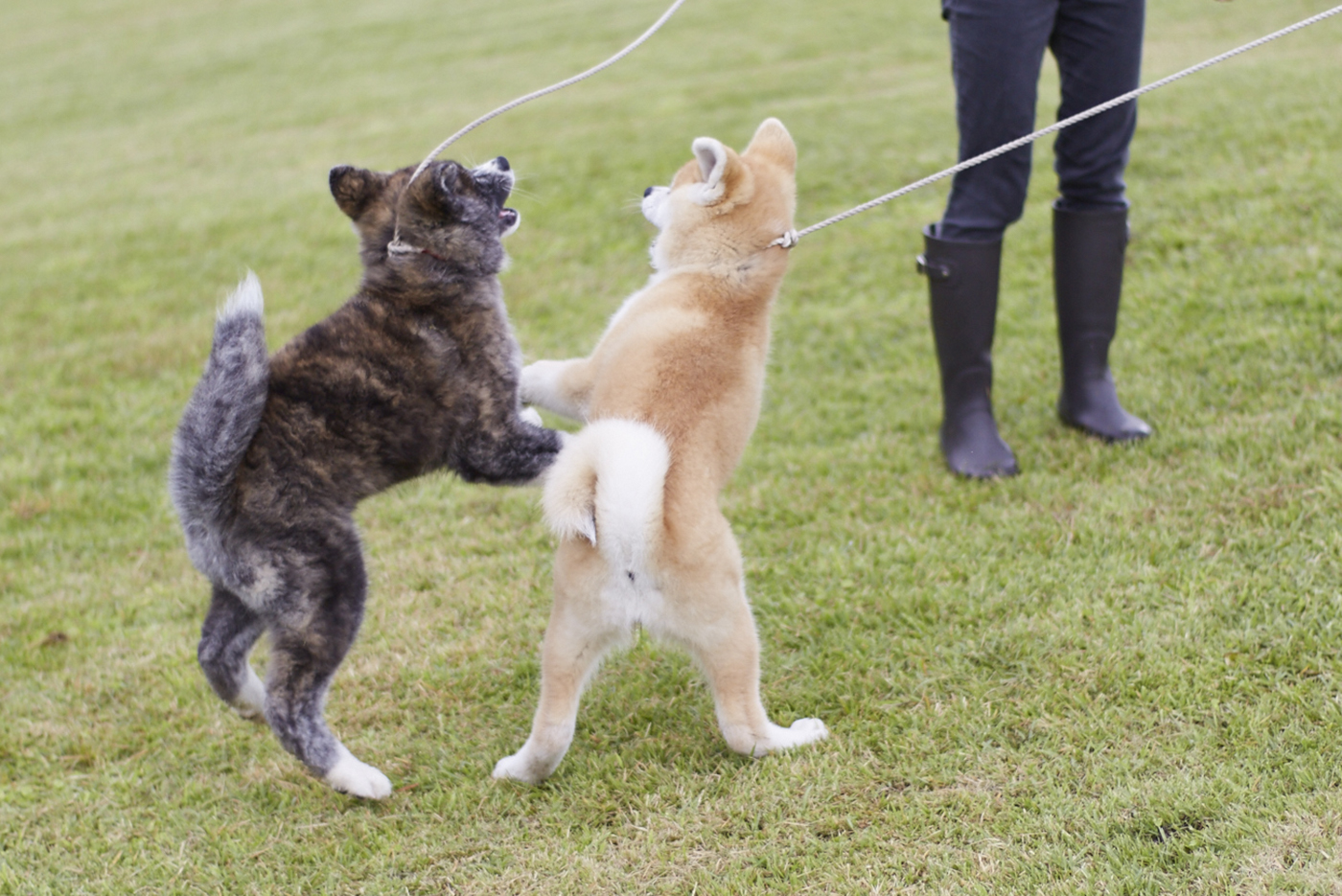 Ōdate runs its own version of a national local area revitalization intiative. We met the women from initiative at the breeder, Mr. Hatakeyama’s house. They will be responsible for promoting Ōdate while looking after Akita dogs. I went to hear what they had to say.
The four women I met were Yukiko OYAMADA and Sairi SUZUKI (both from Chiba prefecture), Ayako TOMIZAWA (from Saitama prefecture) and Nami NISHIYAMA (from Fukuoka prefecture). Oh and of course, two little Akita pups! 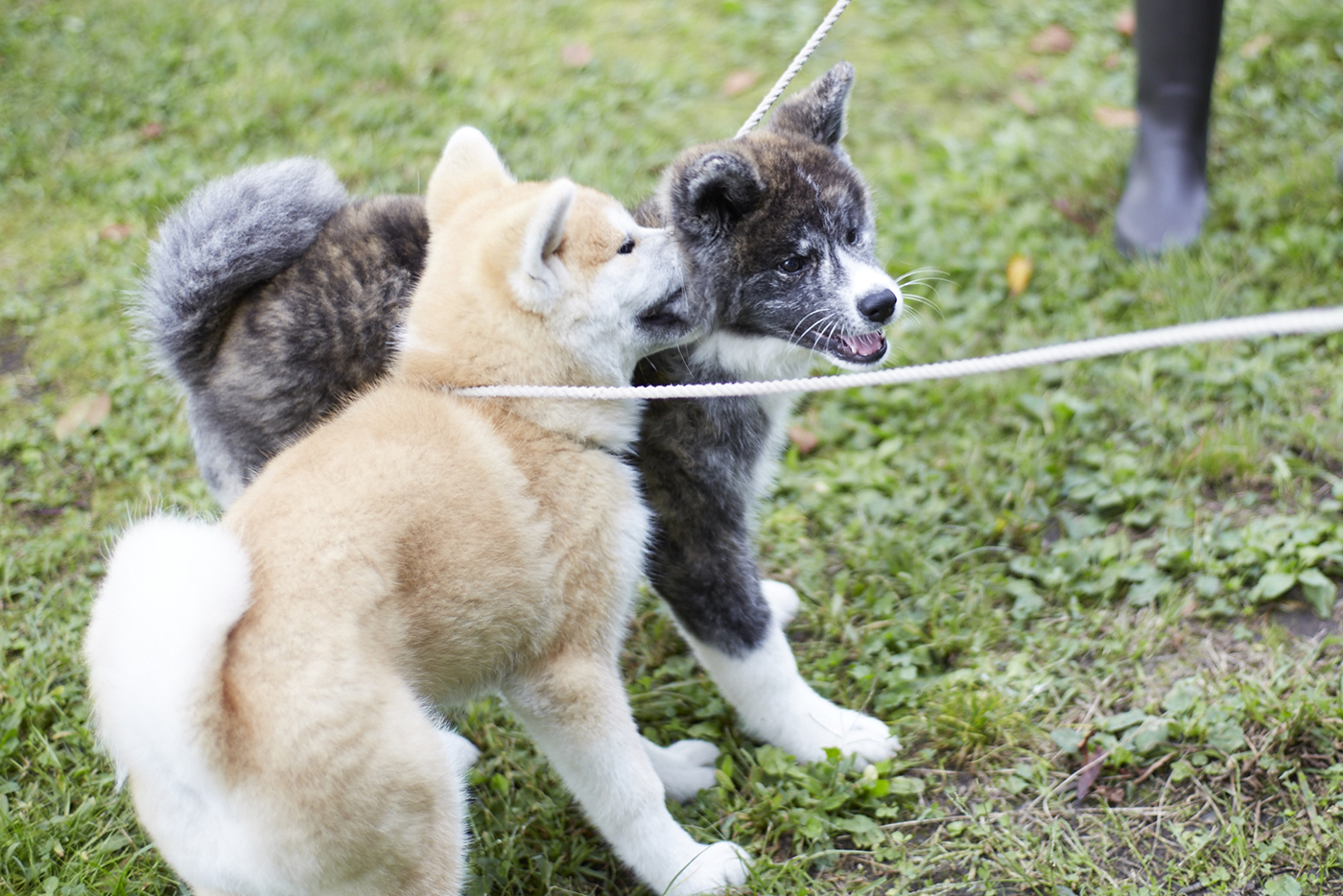 YABUKI
Whoa! Aren’t they cute!!! How old are these little ones?

NISHIYAMA
Three months. The red is called “Ako”, and the sesame is “Asuka”. They’re sisters.

YABUKI
How did you choose names for them?

NISHIYAMA
They were chosen by the general public.

YABUKI
I can’t help myself! They’re so cute I can’t even concentrate on what we’re here to talk about…! So what do you all do every day?

NISHIYAMA
While raising the dogs, we get to know the local people. And through the dogs we promote the city of Ōdate and Akita dogs. 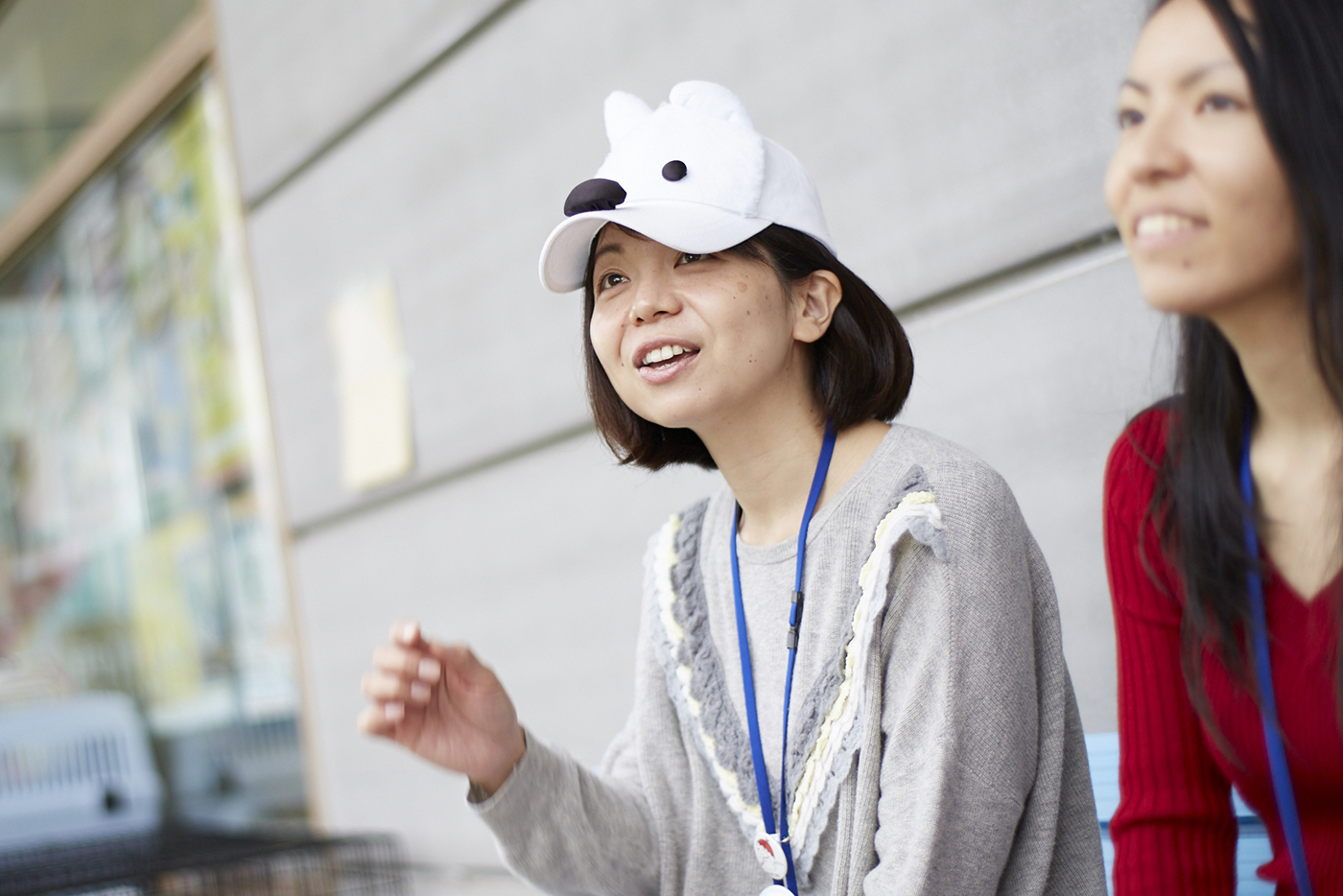 YABUKI
So when they put out the job ad, did it include “looking after Akita dogs” as one of the responsibilities?

SUZUKI
Yes. At the time, they were looking for two people. But they ended up hiring four of us. I’m so pleased about it! I worry about a lot of things, especially when I have to load pictures up on social media. It’s hard to hold a camera in one hand and the dog leash in the other! Haha!

YABUKI
Yes, I bet! Haha! So when did you all come to Ōdate?

SUZUKI
We came on September 1st this year. Then after that, because days with an eight (8th, 18th and 28th – because the Japanese for eight is “hachi” like in the name of the dog “Hachikō”) are important to the initiative, we met the dogs on September 8th. We’ve been here a month now. I think we’ve just about got the hang of it now. Haha! 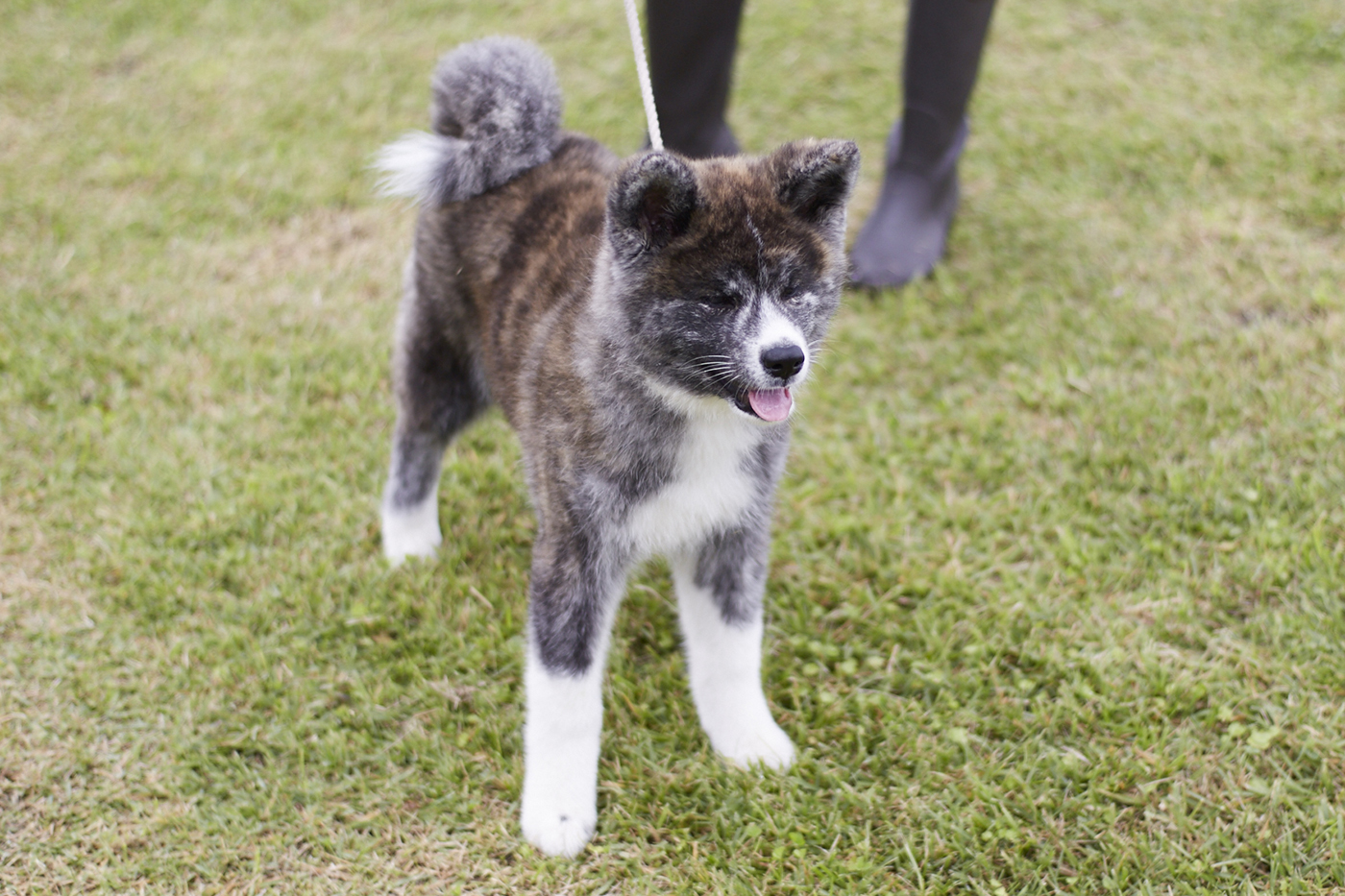 SUZUKI
So two of us each look after one dog. I live with Ayako TOMIZAWA and we look after Asuka.

YABUKI
I take it that Noriko OYAMADA and Nami NISHIYAMA look after Ako, then. So, how has it been after a month?

SUZUKI
At first, Asuka used to get really bad car sickness. Even from a young age, they’re taken around all over the place. It was a really tough schedule…

YABUKI
Oh, really? That must be quite stressful for the dogs.

SUZUKI
Yes. Ako didn’t get car sick. But she gets really lonely. At night, she kept whimpering, causing a right fuss in the neighborhood…

YABUKI
It must be hard until you get used to it. What attracted you to the job, Sairi SUZUKI? 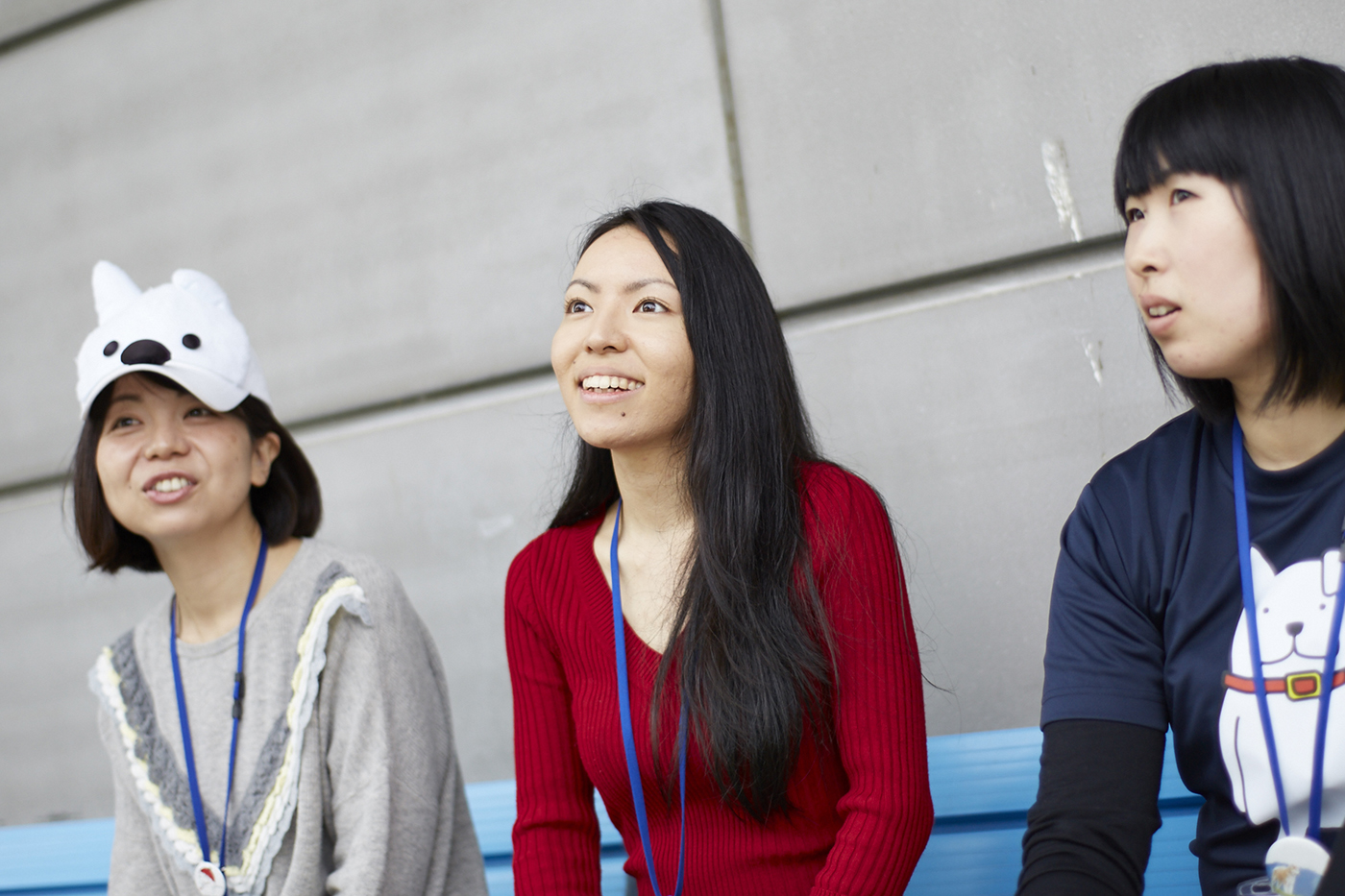 SUZUKI
If it were just looking after dogs, I don’t think I would have applied. For me, the biggest thing was being able to work on town planning. I’ve been able to expand my world by working with dogs that I love, in Tohoku—a place that I love!

SUZUKI
Actually, when I went overseas, a lot of people hadn’t really heard of Tohoku. I used to live in Iwate (the prefecture next to Akita) before too. Many people know Tokyo, Osaka, Hokkaido and Nagano for example. But places like Iwate and Akita, no way! Even though I think that this is the places most blessed by nature in the world. If we compare here to many other places around the world, there aren’t many places that are… as blessed by nature and with so little crime. But the people who live here just don’t know that. And that’s why I want to tell people what’s good about this place. 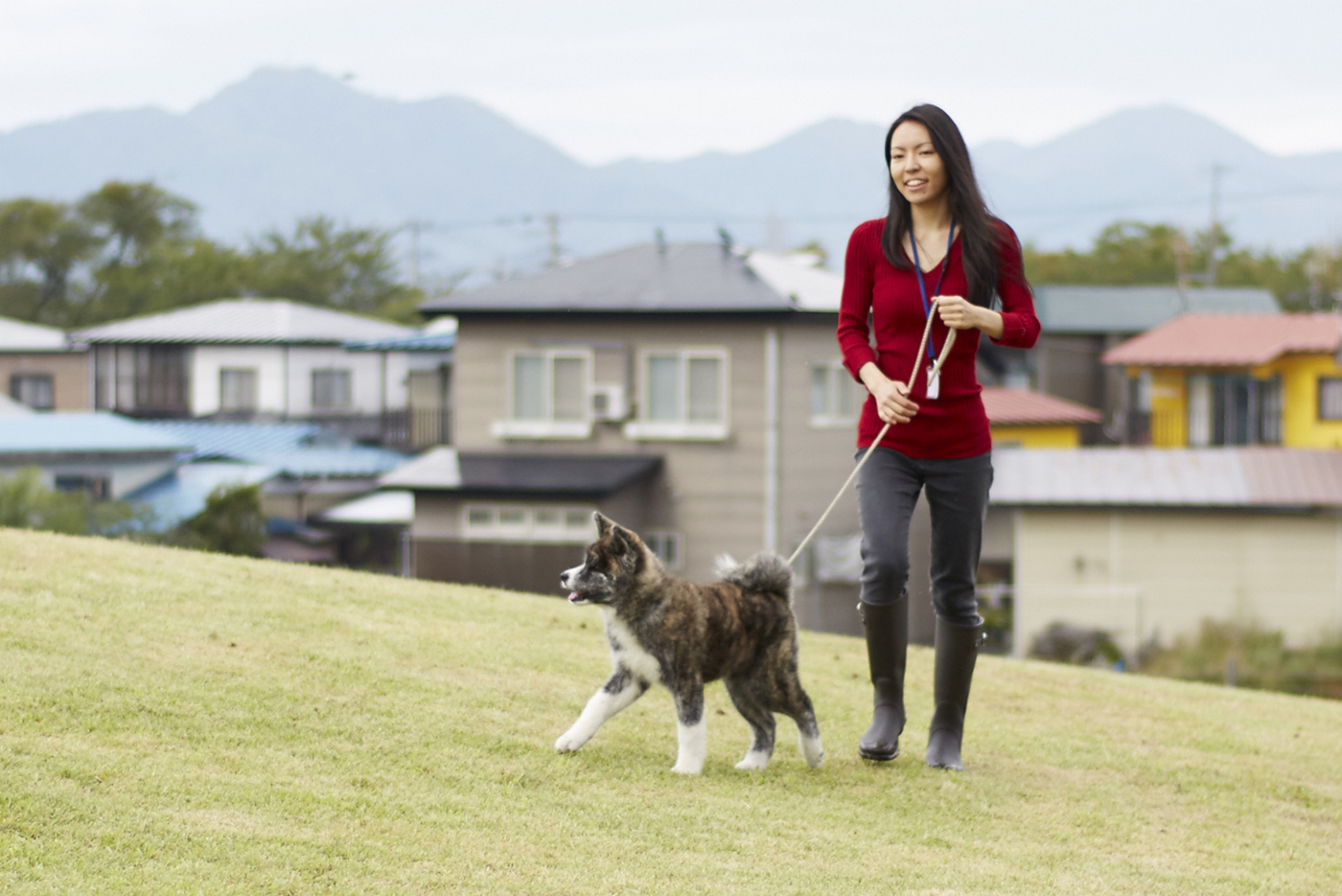 YABUKI
What sort of things do you mean?

SUZUKI
Things that throughout Japan would be looked upon sternly, here would be more like in America: “No problem”. There’s kind of a “live and let live” attitude here. They’ve kind of accepted me with no objections.

YABUKI
Would you say they’re kind of generous in spirit?

SUZUKI
That’s right. If I do something wrong, if it were something that could be said to put somebody out or cause them problems, everyone still just says “No problem!” That’s really helped me settle in. 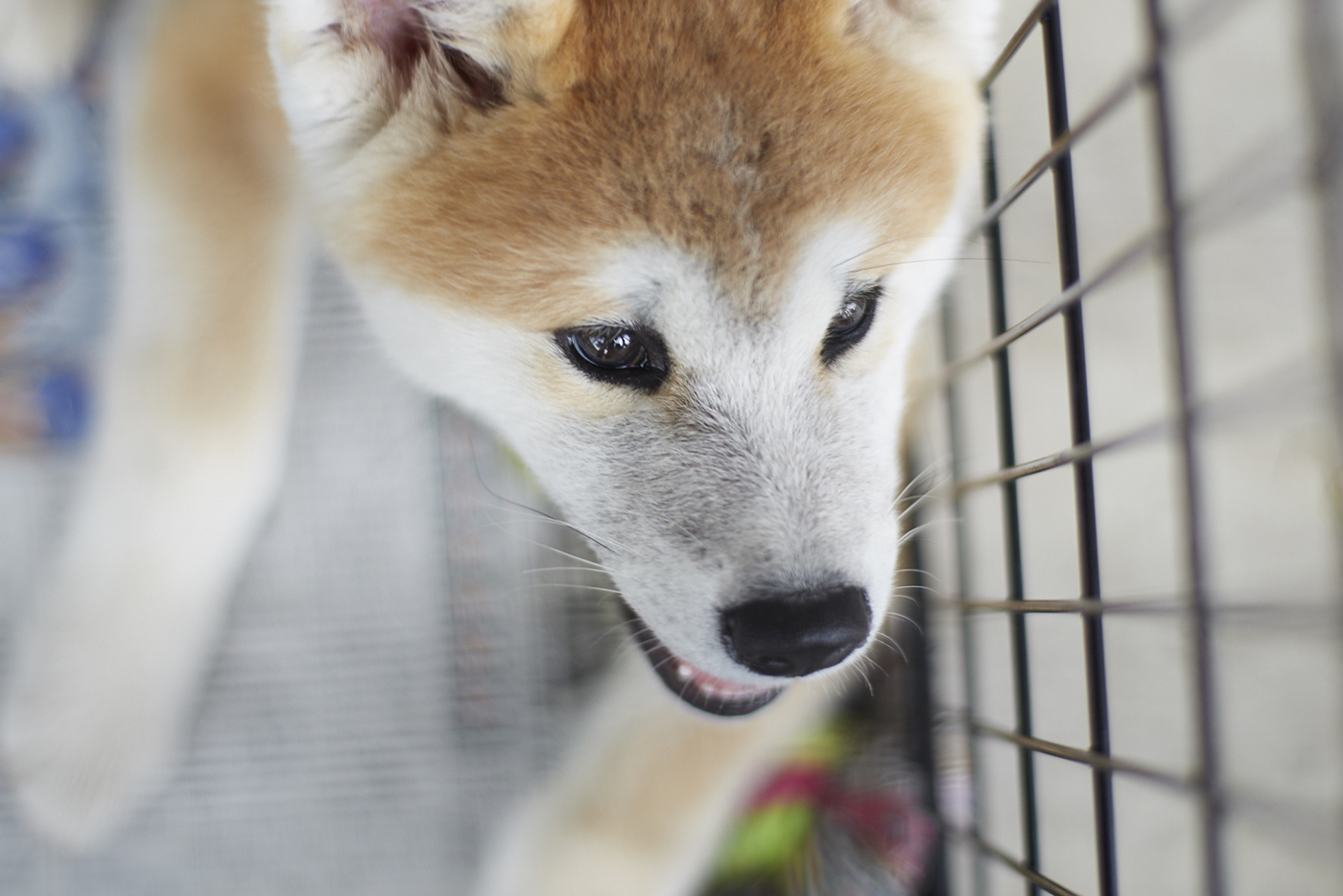 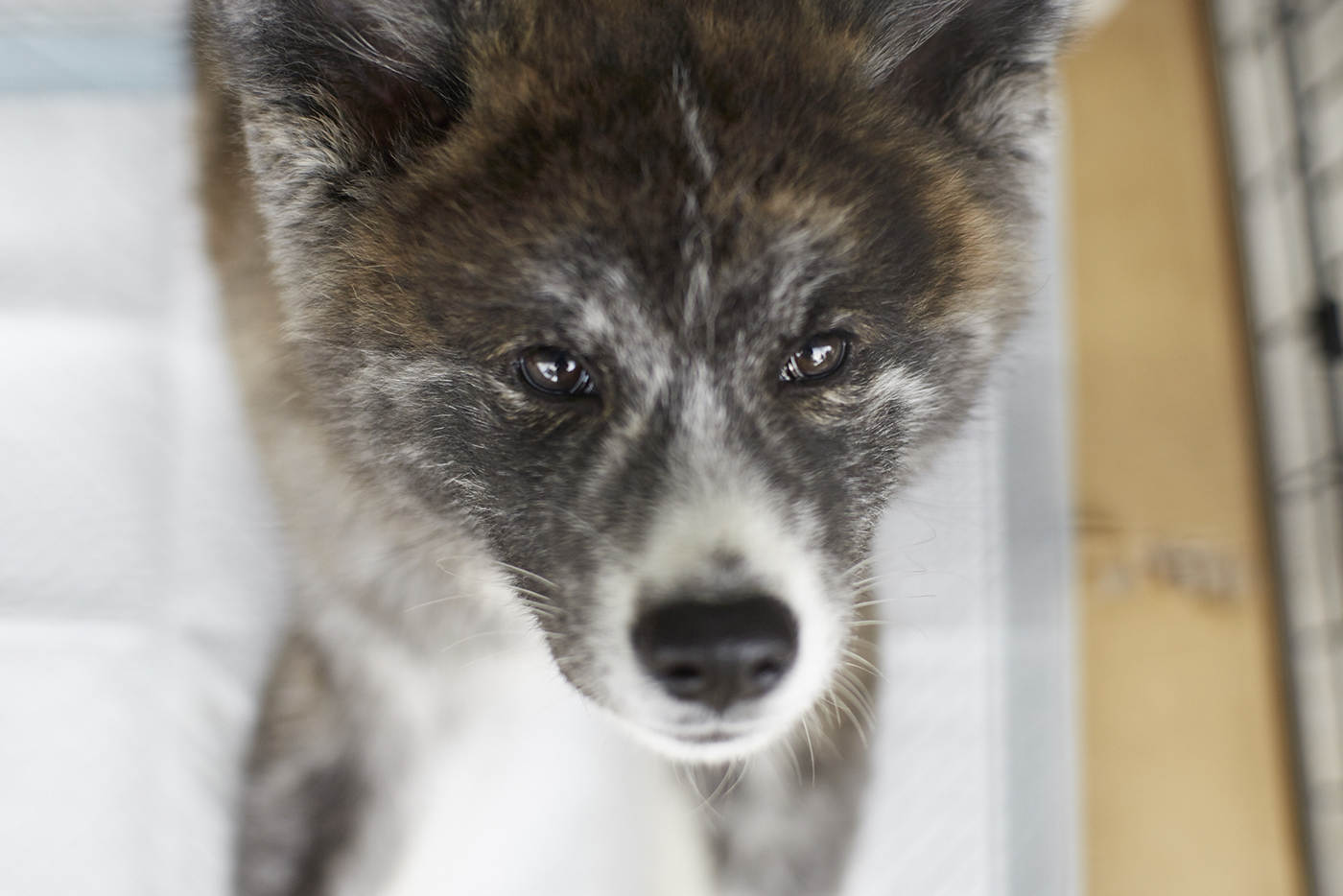 YABUKI
Did you feel there is a gap between here and where you’re from?

YABUKI
Yes, I think Akita City is a bit like that.

SUZUKI
I think that rather than having loads of facilities for tourists, it’s much better to leave these places as they are. But Ayako TOMIZAWA is more like “Wow, there are so many mountains!” which makes me realize “Oh, yeah, there are!” 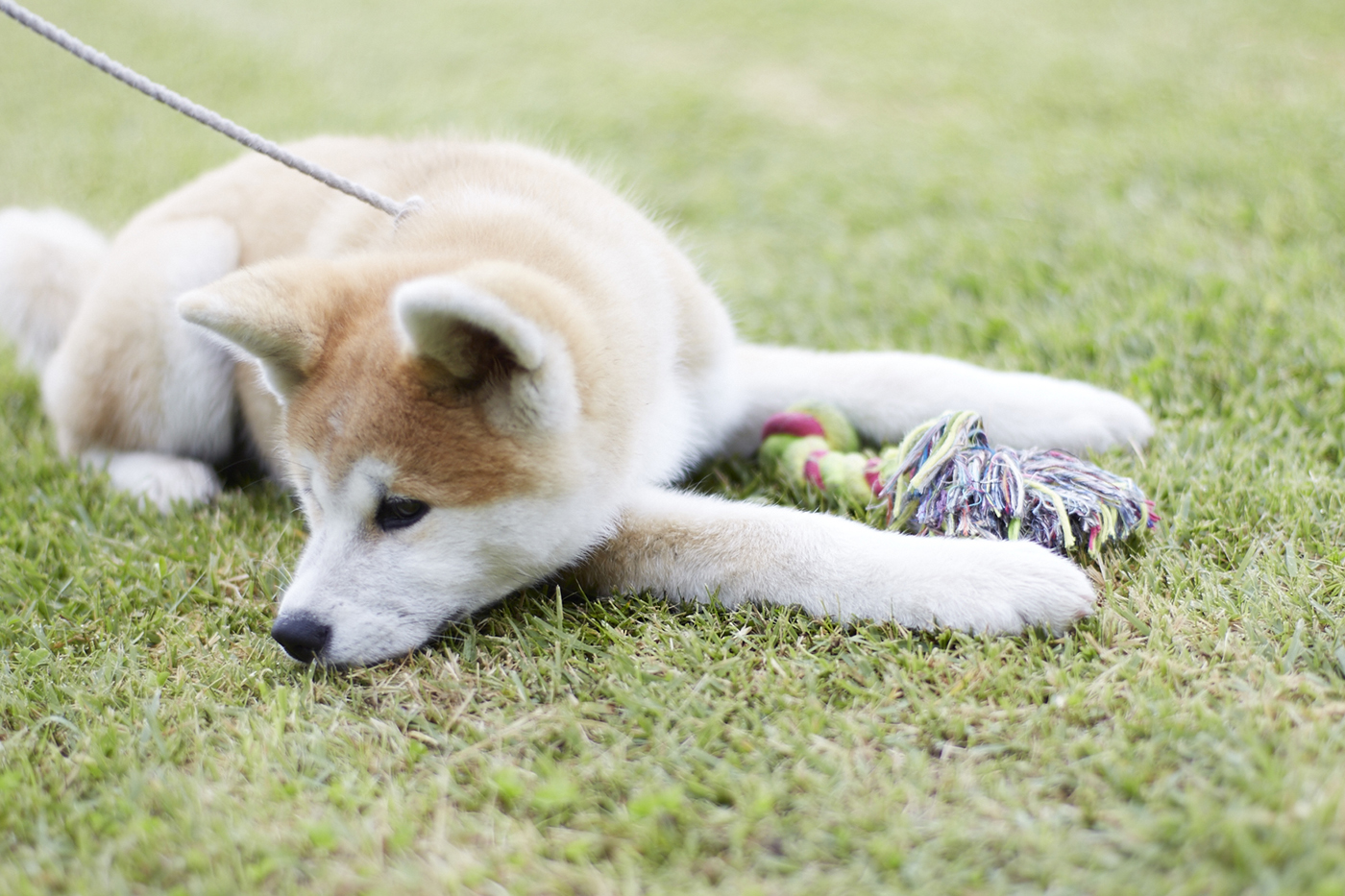 YABUKI
I also live in Akita. There really are a lot of things that people who come from outside can make us realize are good about this place. Is there anything in particular you want to do while you’re working on the initiative?

SUZUKI
Well, we’re going to share information from the perspective of these dogs on social media. But I’d really like it if it leads to more tourism. First of all, I’d like to learn more about Akita prefecture. 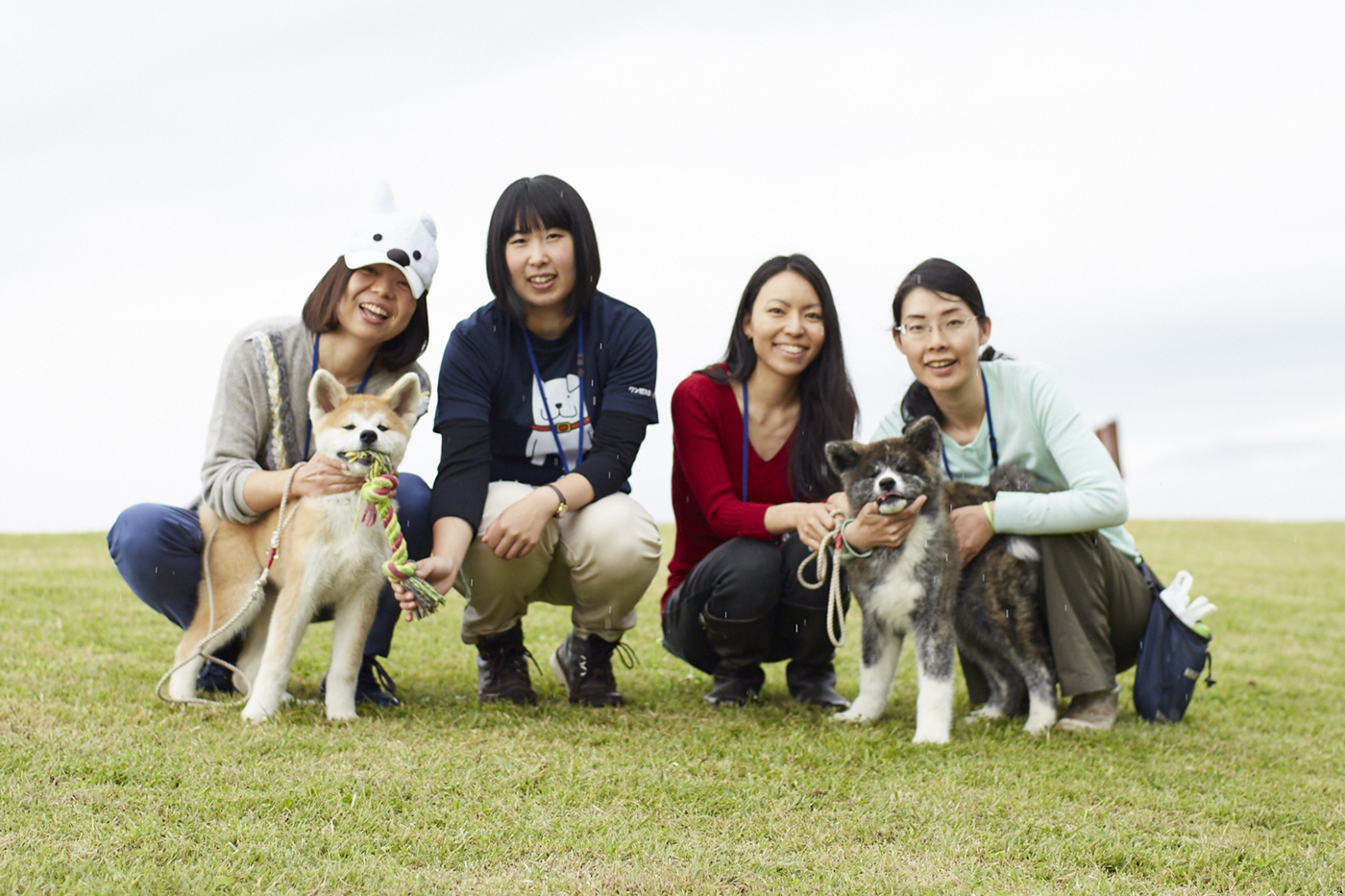 I had the feeling that the women from the local revitalization initiative were making a new start along with the puppies. Next time, we’ll visit a breeder, who like Mr. Hatakeyama is responsible for advising the women. Mr. Hikage is a veteran breeder with over 40 years’ experience.