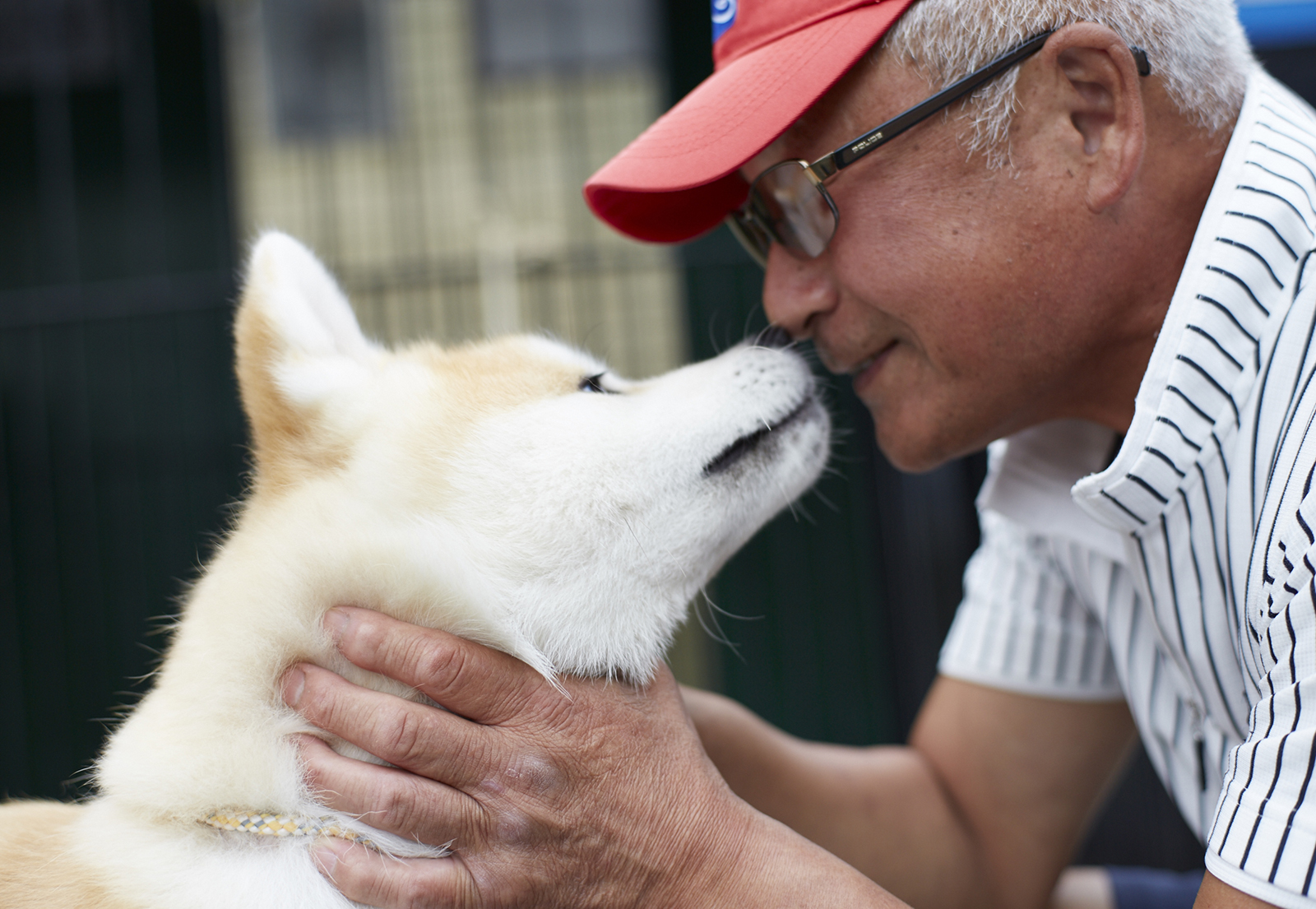 So far in our search for Akita dogs in Ōdate, we have been able to visit the house where a president’s dog was raised as well as a group of women who have come here to help revitalize the area. Lastly, we’re going to meet a 40-year veteran breeder, Hisae HIKAGE. His four-month-old pup, Sakura was waiting there for us too.

HIKAGE
This one is smart. If you call her, she answers. Sakura! Sakura! 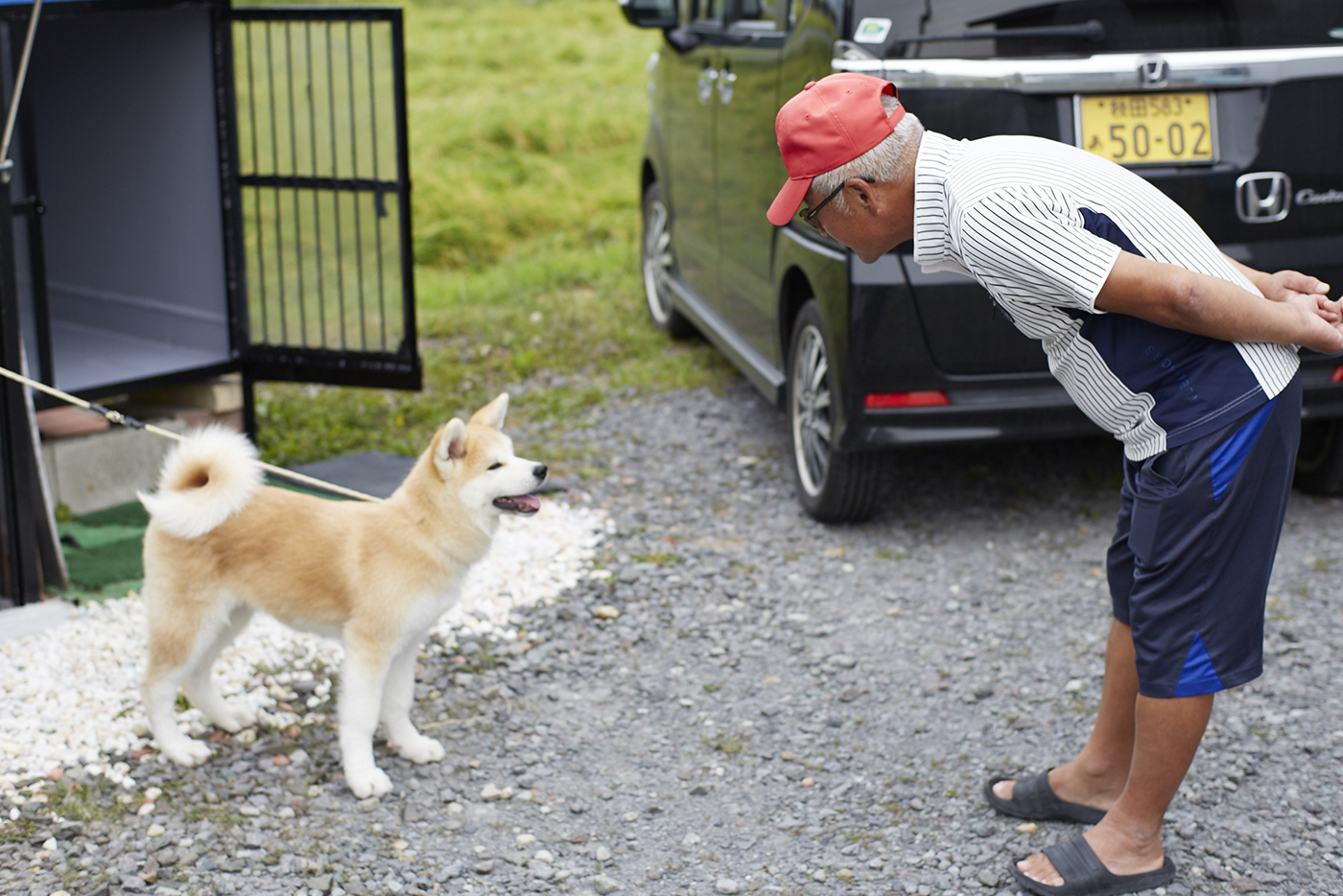 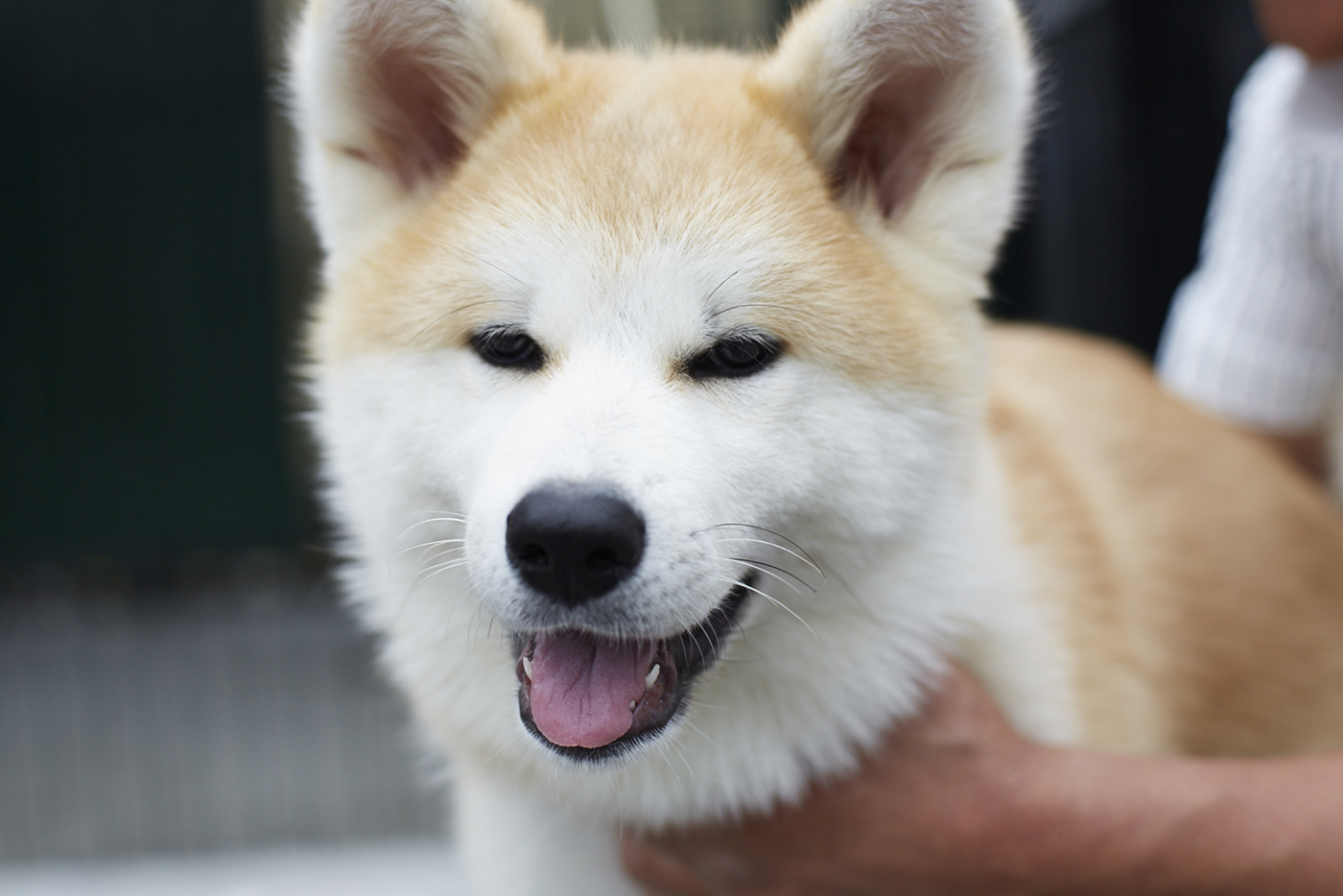 YABUKI
Hey, am I no good? Haha!

HIKAGE
She’s really smart. She reminds me when it’s time for her food. And she does what she’s supposed to do properly, too. You know by about two months whether or not a dog is going to turn out smart.

YABUKI
When do you start training them?

HIKAGE
We don’t really train Akitas. They just have to stand properly in the dog shows. There’s none of this “Give me a paw” or “Sit!” We don’t need that.

YABUKI
Ah, so she learnt how to answer on her own then?

HIKAGE
Yeah. She just picked it up while we talk to each other every day. 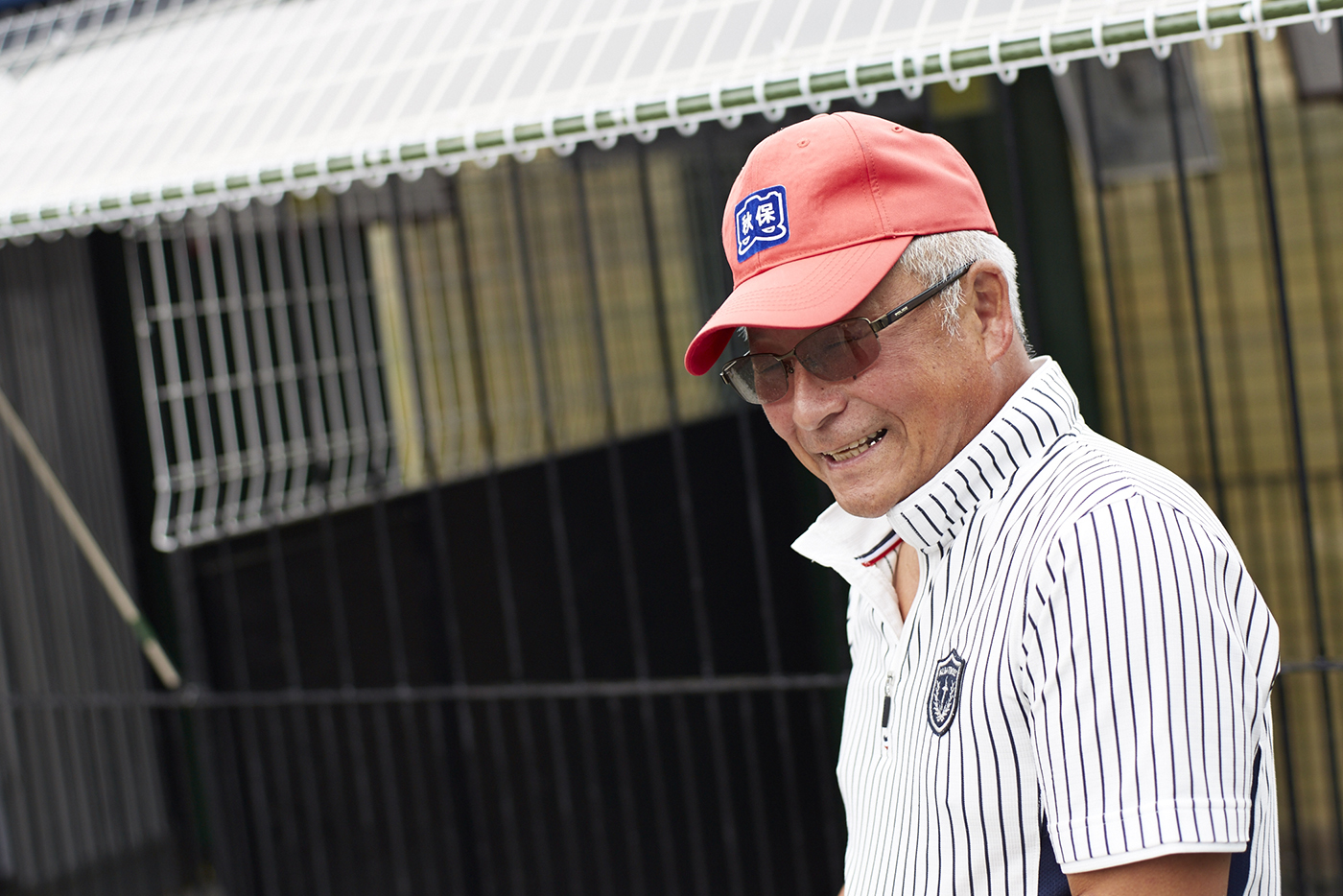 YABUKI
How long have you been doing this work, Mr. Hikage?

HIKAGE
I think I’ve been doing this the longest in Ōdate. 1973 － since before the Akita Dog Preservation Society Building opened. But it’s tough rearing animals. Maybe other people think I’m crazy. In scorching midsummer, in freezing blizzards, I’m out every morning at five walking the dogs. I wouldn’t be able to do it without the help of my family.

YABUKI
So what does your family say about it?

HIKAGE
My wife doesn’t really like dogs! Haha! She sometimes pats them on the head. That’s about it! When we first got married, she hated dogs. She used to say “That bloody dog!” I mean when you have dogs, you can’t go away anywhere. And the dogs, they know when someone doesn’t like them. They hardly ever wag their tails with my wife. 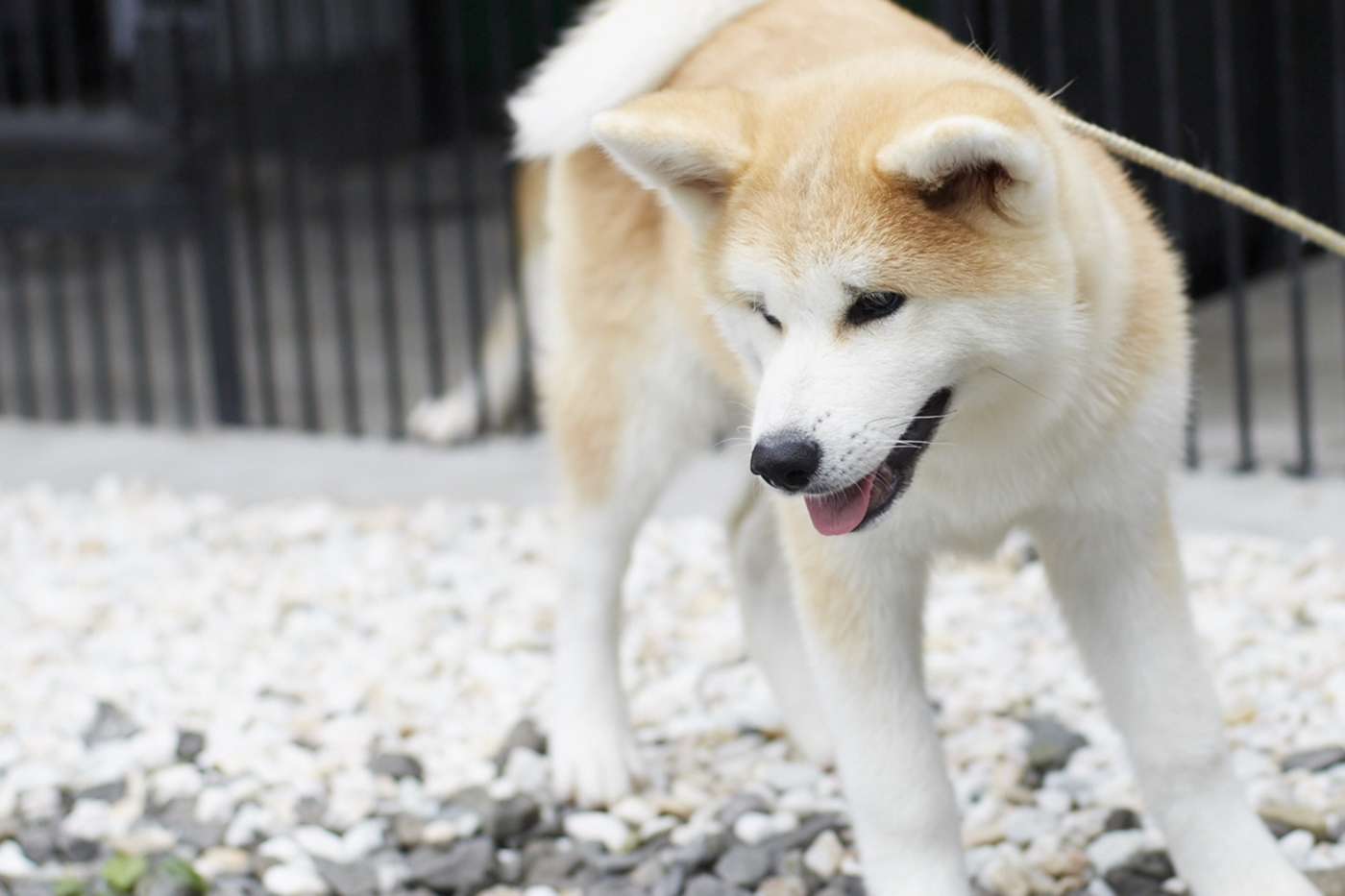 YABUKI
Hahaha! Do you have a mentor showing you the way?

HIKAGE
No, no. When I first started, I had loads of breeder friends around.

HIKAGE
That’s right. In the old days, there used to be what we now call breeders in all parts of town. But now around here, there’s only me. There’s hardly anyone left.

YABUKI
Is that because it’s hard to look after them?

HIKAGE
You can’t really make a living from raising dogs. It costs quite a lot of money, and they are living things. But in the future, we’re going to need to bring through more people to raise the dogs. There just aren’t really many young people around.

YABUKI
How do you bring people through?

HIKAGE
It’s tough. We need some help from the local government. You know, financial support in buying dog food… that sort of thing is what’s needed, I think. 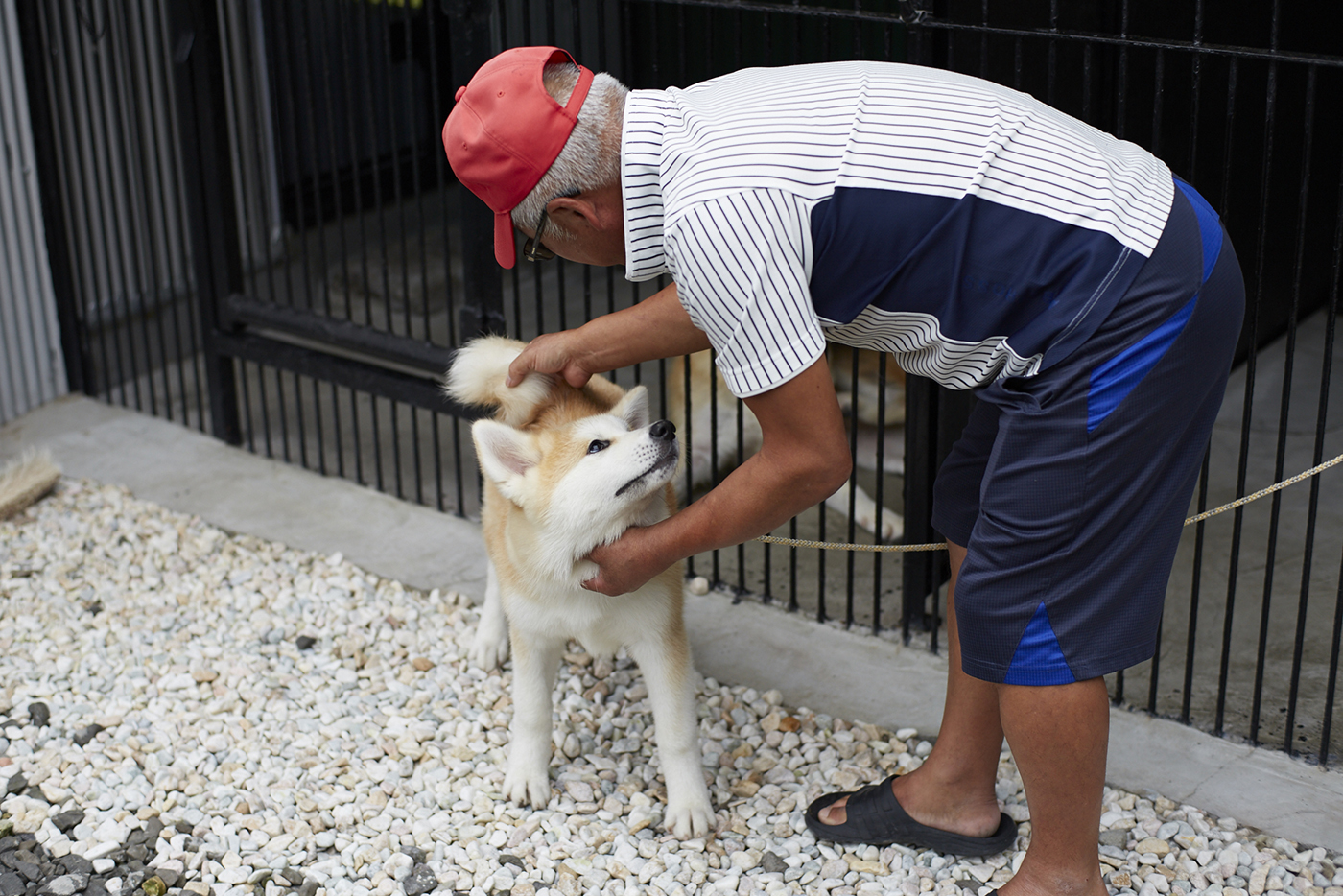 YABUKI
Well now even in the cities, they’re doing lots of PR for Akita dogs.

HIKAGE
Everyone thinks that if they come to Ōdate, they can find loads of dogs. City folk think they can come all the way here, find a nice dog and then take it home. But they get here and are surprised.

YABUKI
You mean there aren’t many dogs?

HIKAGE
No, that’s right. It’s not like how it used to be. In the old days, people used to say “Send us a photo”, but today they say “We’ll come up and get it”. But there aren’t that many dogs that people will go to the trouble of traveling to buy.

HIKAGE
There’s a lot of people who give you the run-around. Make you wait.

HIKAGE
There are quite a few people who really want a dog and will come all the way to get one. For those people, I really do my best to accommodate them. But recently, there was a foreigner who just showed up and said “I’ve got the money to pay. Can you give me twenty dogs?” Of course I said no. It’s not that easy. 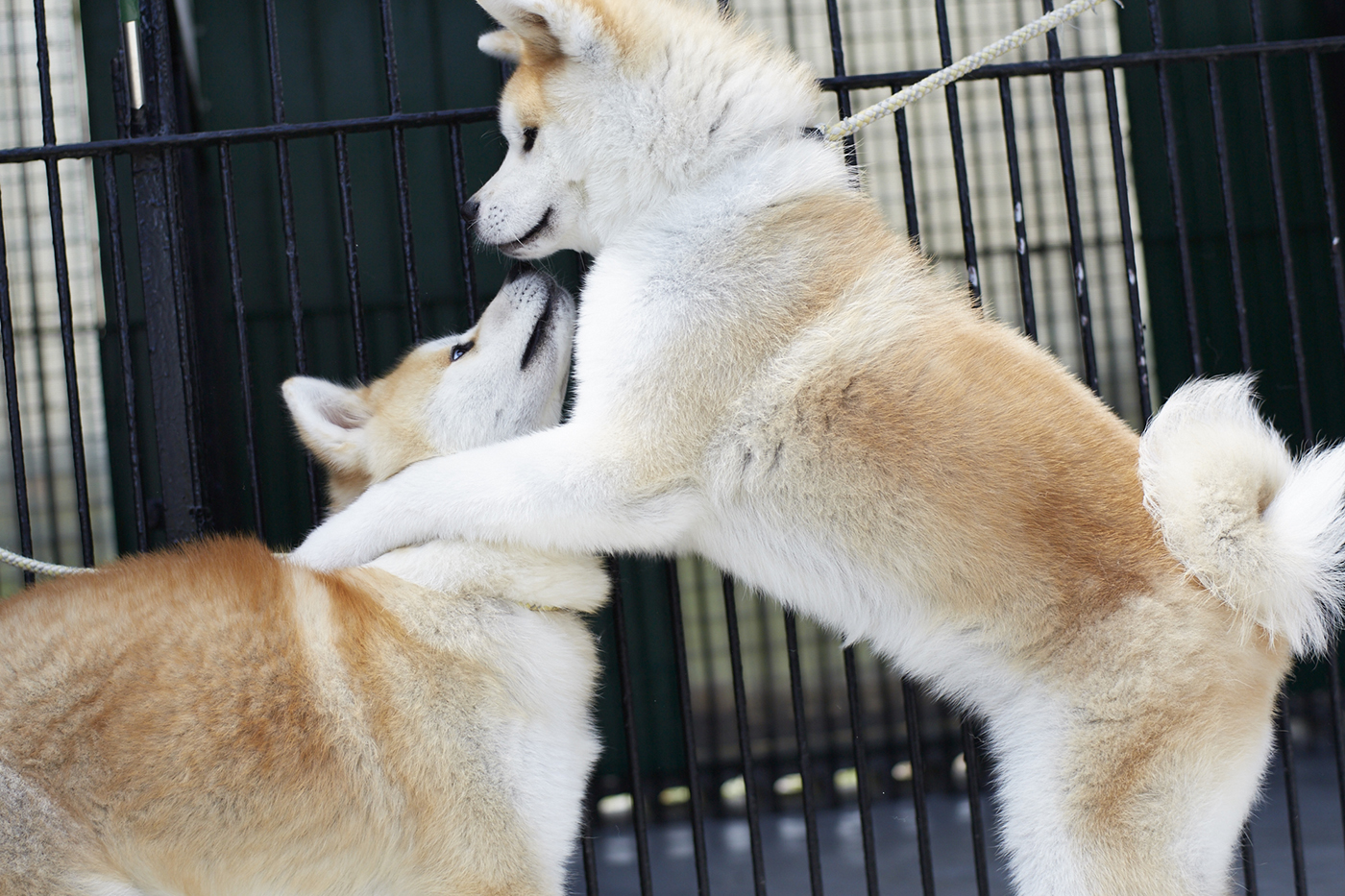 YABUKI
But in spite of all the hard work, you’ve been doing it for more than 40 years. There must be lots of joy keeping you in it, mustn’t there?

HIKAGE
The thing that gives me most joy is when a dog I have raised comes back to Ōdate. To the dog show we have here. That just leaves me speechless…! There’s one particular dog I’d really love to see again.

HIKAGE
It’s the best dog ever. His name is Haruto and he’s now in Gunma. He’s the kind of dog that gets his own article in the Akita dog owners’ magazine; he’ll probably be a candidate for a special award. Everyone knows him. They ask “Are you that Haruto’s dad?” One person took 24 hours to come all the way from Tanegashima earlier this year. They came here and asked “Is this the kennel where Haruto was raised?”

YABUKI
I bet looking forward to saying “That’s my boy! Look how good he is!” means you can’t stop! You should be able to see him at the next dog show.

YABUKI
When you have to say goodbye to one of your dogs, do you get emotional? 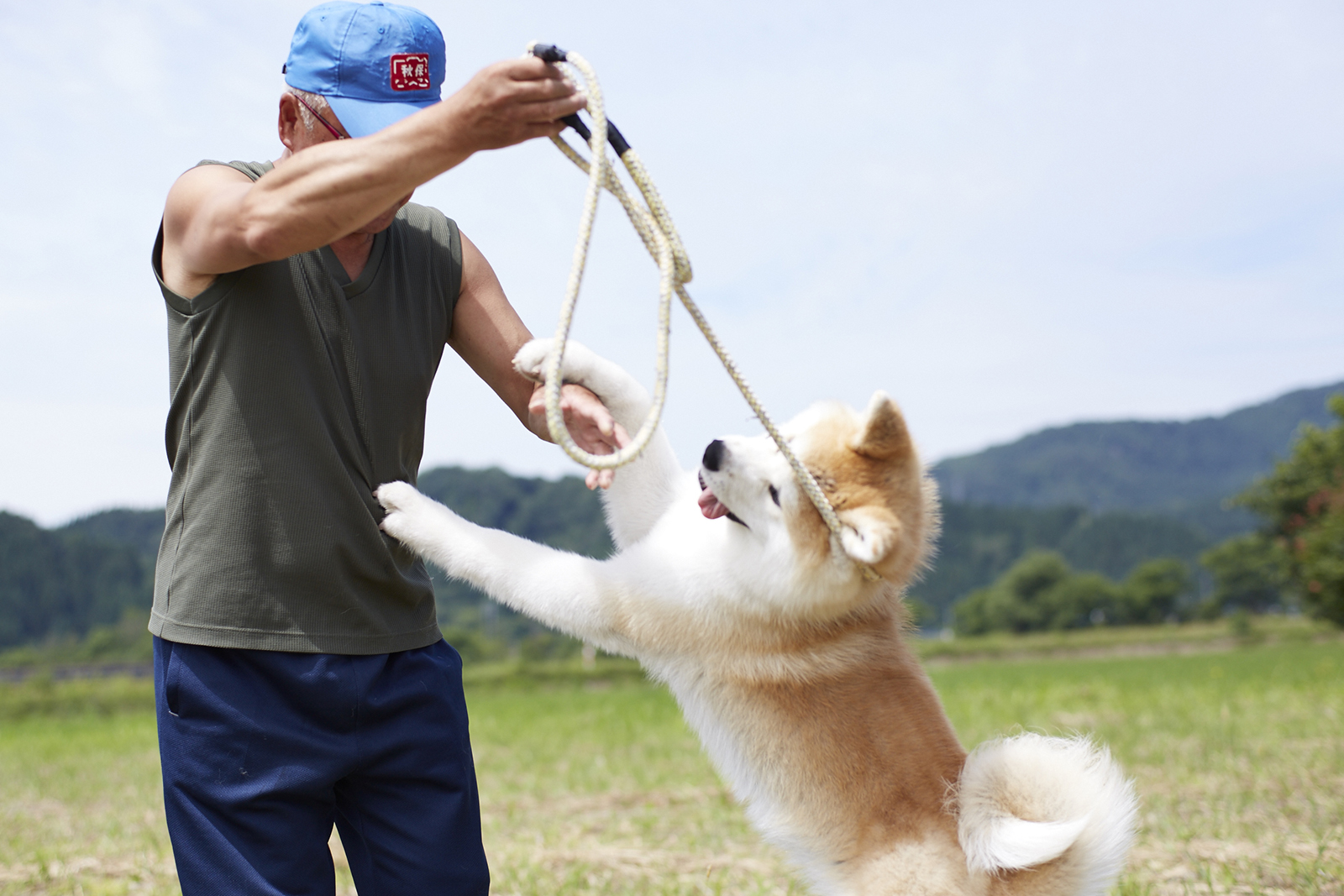 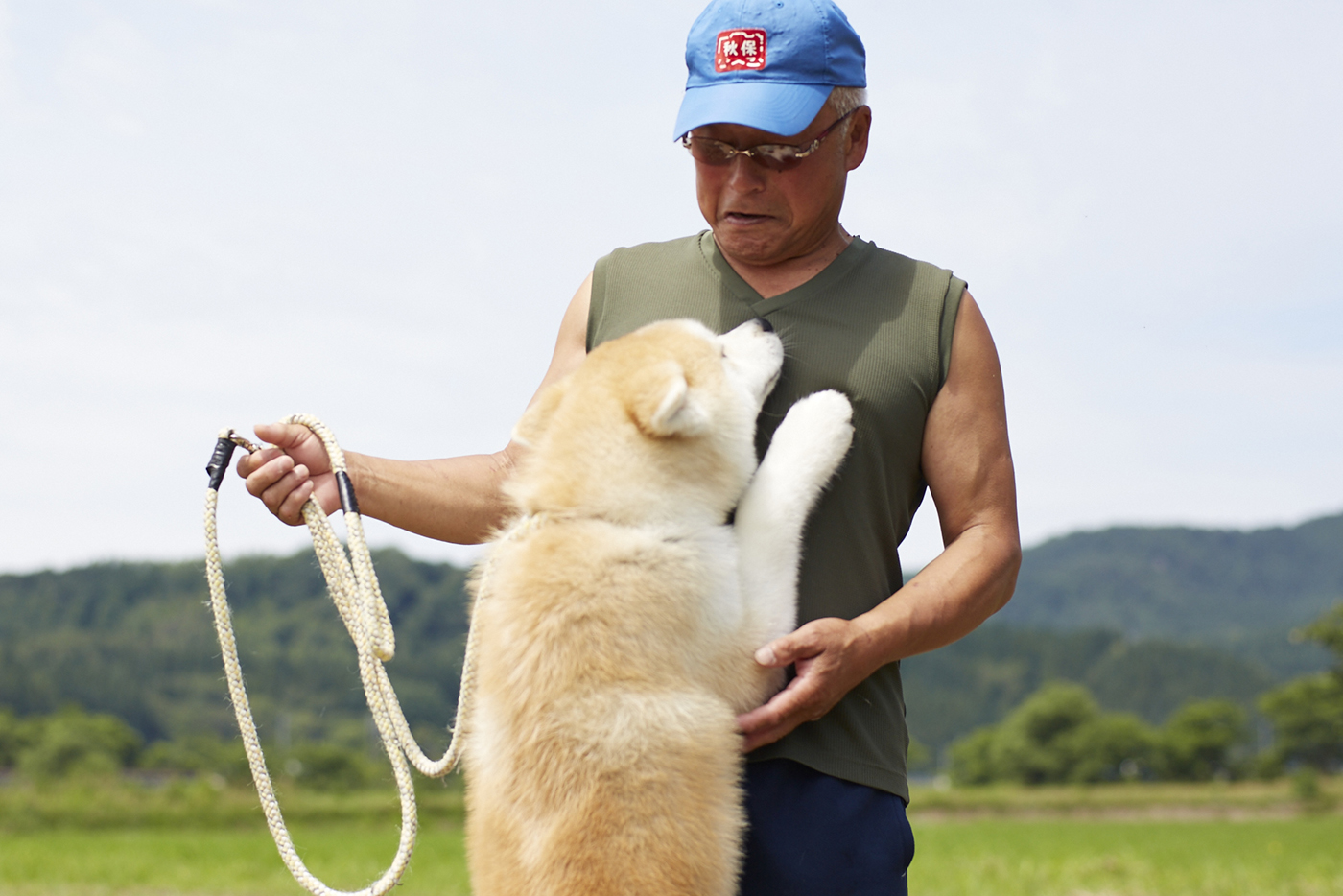 HIKAGE
Yeah, it’s hard to say goodbye. I mean after all, I’ve been watching over them since they were born.

HIKAGE
So that’s why I don’t give them out to people nearby. It’d bother me too much how they were doing.

YABUKI
You mean how they’re raising them?

HIKAGE
Yeah. It’s the same as with your own kids. One time, I went to see how one of the dogs was doing and I ended up taking it back home with me.

HIKAGE
I went there, and they just weren’t looking after the dog properly. It had ticks, and they hadn’t even brushed its fur. 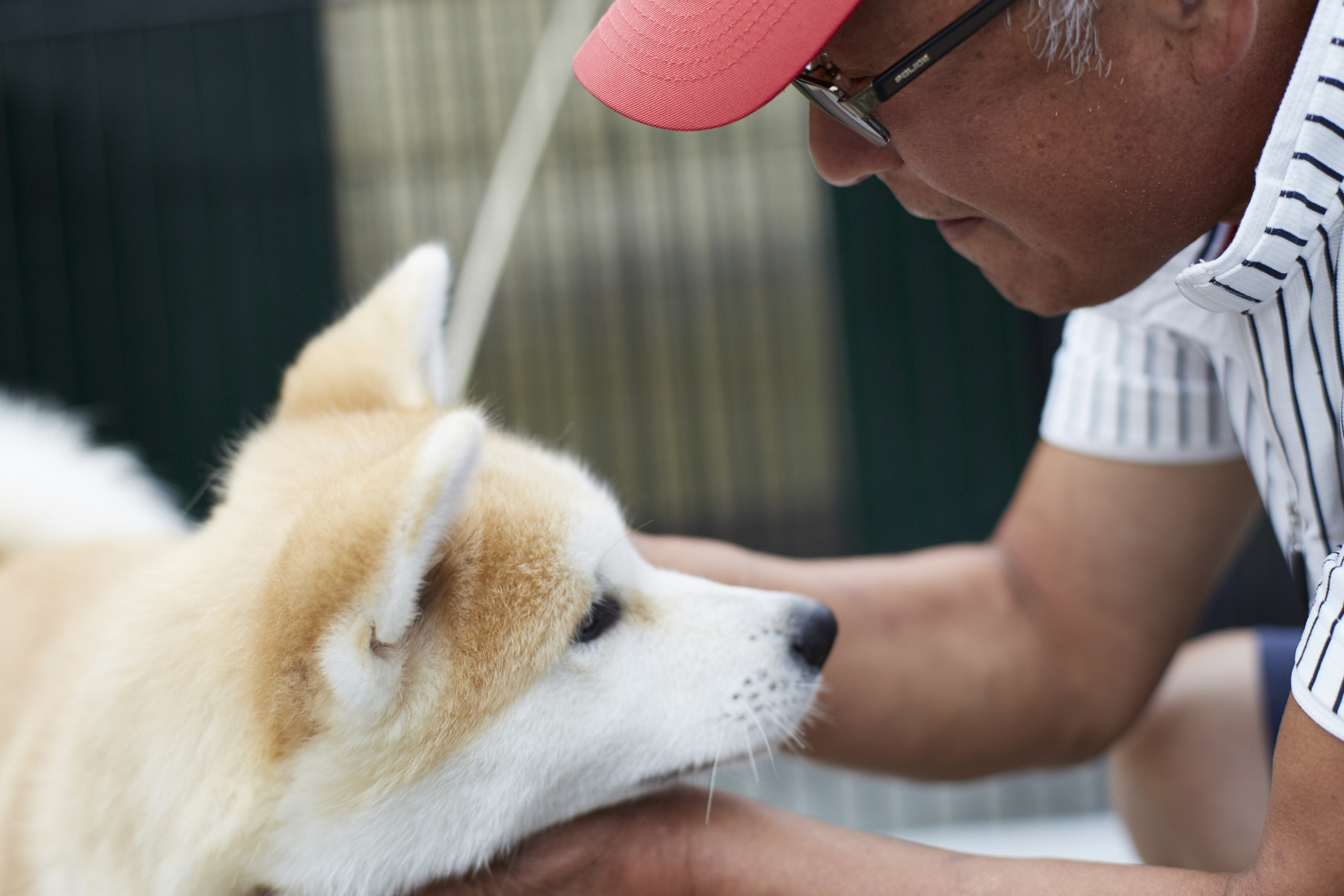 HIKAGE
And so if I ever give a dog to someone nearby, I only do it to people I know will do a good job.

YABUKI
You want to feel glad that the dog is being looked after by this person or that person, don’t you?

HIKAGE
But if they’re too enthusiastic, that can be a problem too. You know some people are so enthusiastic about the dog that they forget to prepare their own meals! Haha!

HIKAGE
I think Sakura is going to be a great dog. I can definitely put her in a show. I’m looking forward to that.

YABUKI
Yeah, I’m looking forward to that too! I’ll come back and see her again when she’s a bit bigger. Thanks very much! 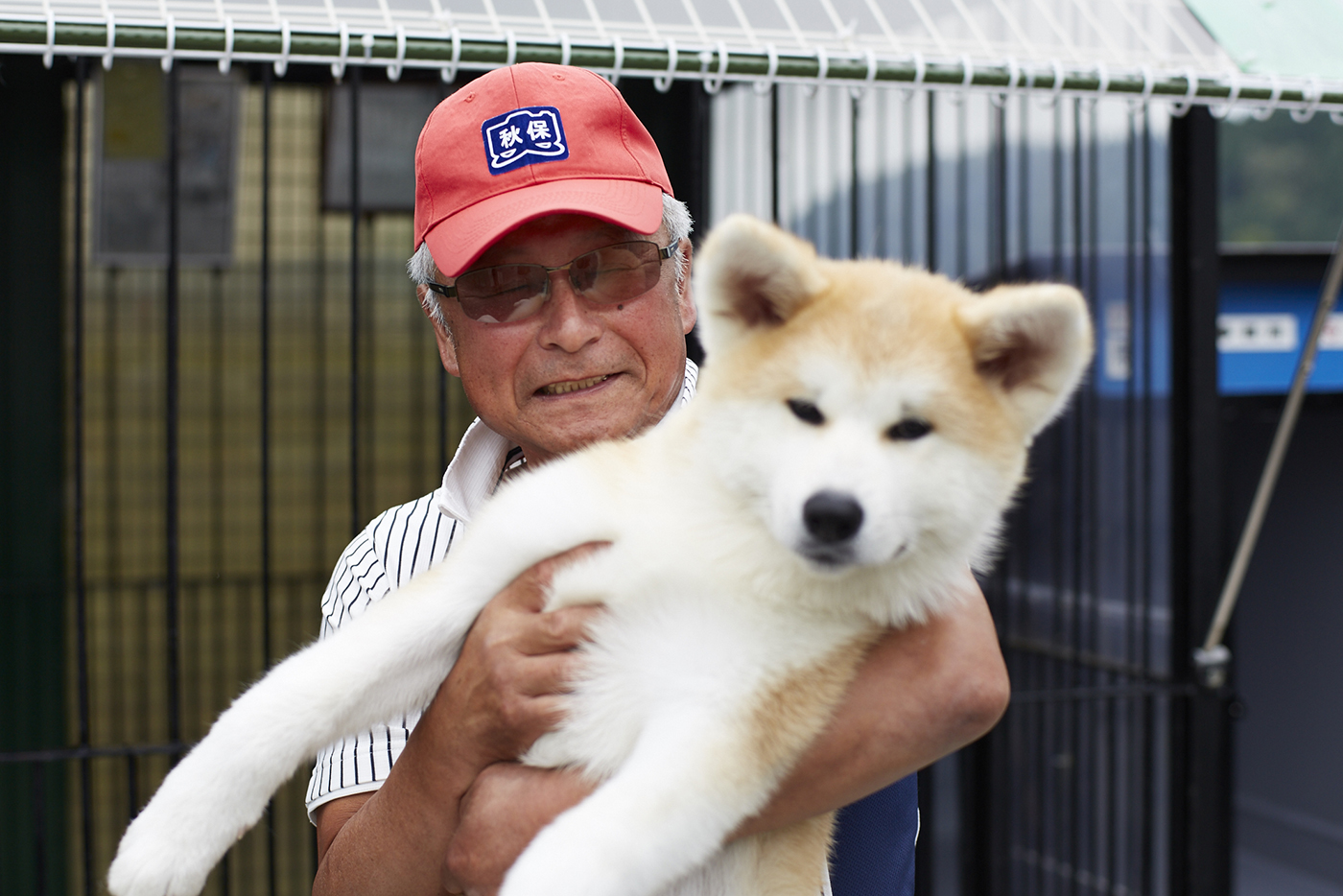 Akita prefecture needs Akita dogs to be active for its PR. They’re tremendously cute, but there are serious problems because they are living things. And being able to grasp both of these points for the first time, I feel that Akita dogs are something that we can really be proud of. But anyway, you mustn’t go away without having a look at this video of cute Akitas in action!

Were the articles helpful
for you to learn about Akita dog?
If yes, click the button (with voice)
below!