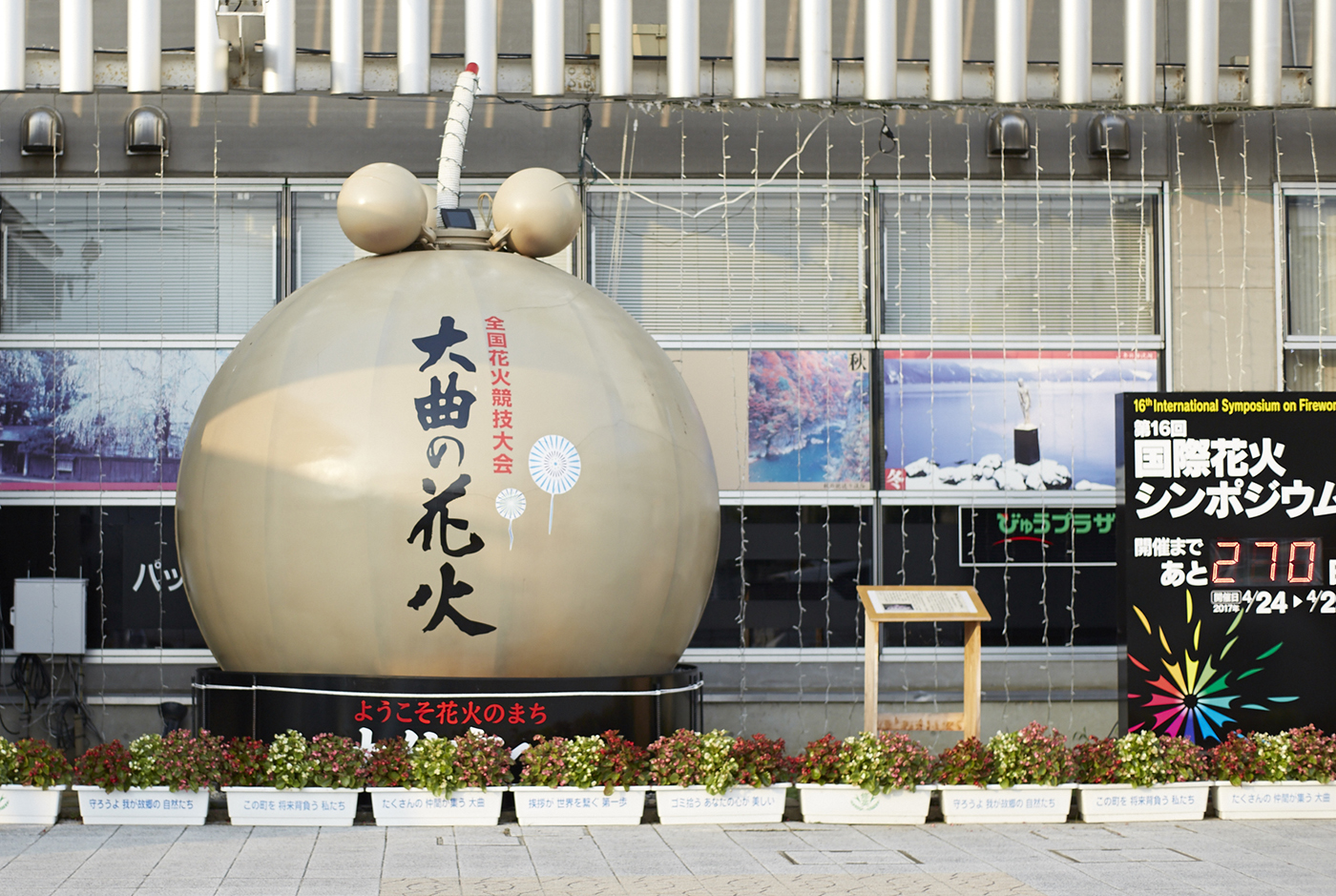 At last, the nationwide fireworks competition ‘Omagari no Hanabi’ (Omagari Fireworks) is upon us. Continuing on from last time, we’re talking to Mr. Yoshihiro Niiyama, from ‘Omagari Hanabi Kagaku Kogyo Ltd.’ (Omagari Fireworks and Chemicals Industries) about what to look for in this year’s event and what makes it so special. 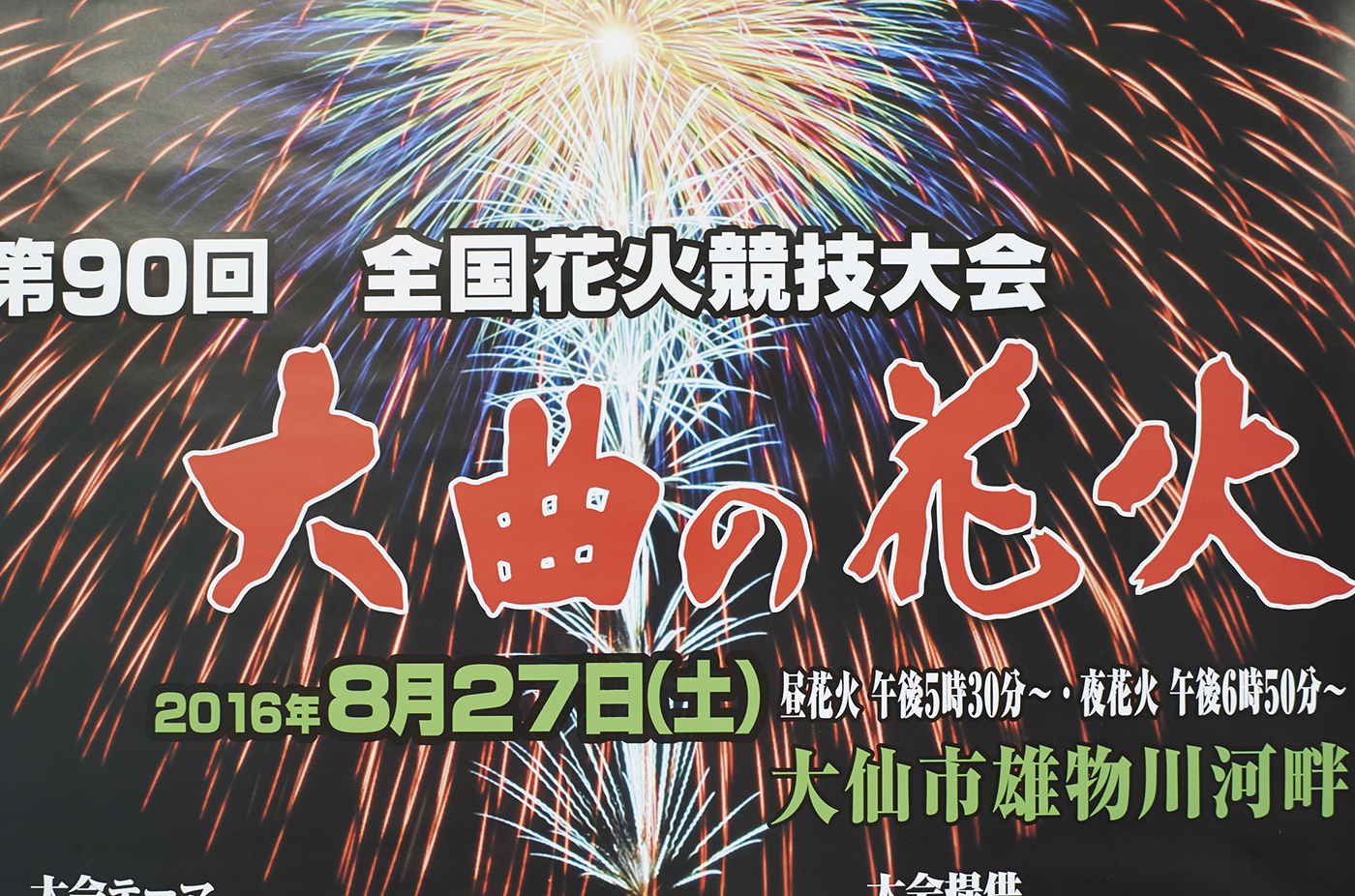 Niiyama
The Omagari Fireworks event is totally different from other fireworks festivals because it’s a competition. The final event to take place, the ‘Taikai teikyo hanabi’ (Event Sponsor Fireworks) are the main talking point, but as far as the pyrotechnicians are concerned, they’re only here for the inter-company competition.

Yabuki
Right. I see what you mean!

Niiyama
There are around 150 fireworks companies in Japan at present, but only a handful of them compete in the Omagari Fireworks. There’s a rule that no more than 30 can participate, and this time round there are 28 companies.

Yabuki
So in that case how do they get picked? 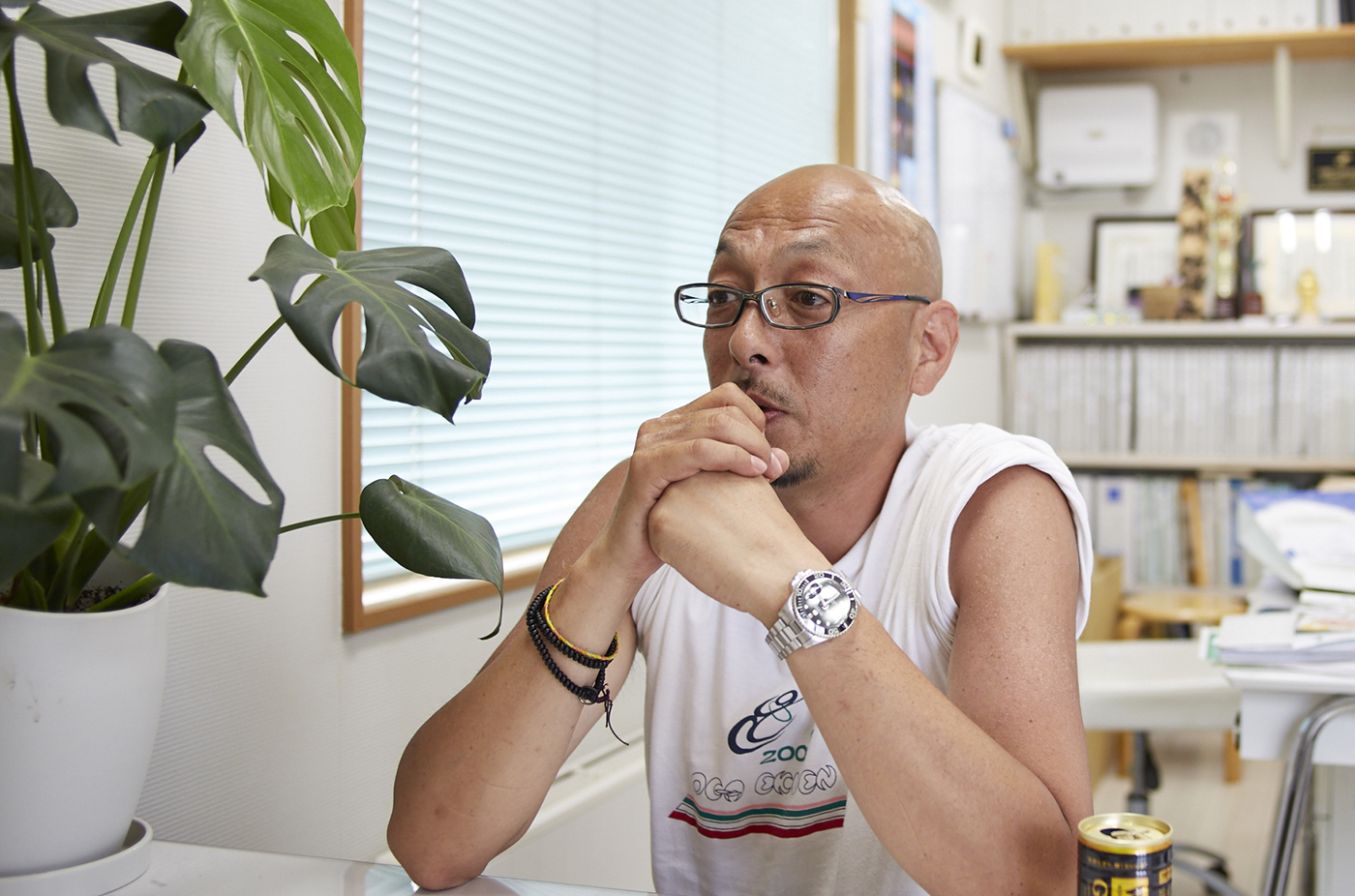 Niiyama
The organizers go to watch competitions all over the country. They choose the companies that win awards, or businesses who impress with the technology they use. Once every five years, five companies in the competitor group get replaced.

Yabuki
So little by little the companies change over, right?

Niiyama
Also, Omagari is the only place where they have a ‘Daytime Fireworks’ competition. It’s a sightseeing spectacle as well I’d say.

Niiyama
We call daytime fireworks ‘enryu’ or smoke dragons. Making these is very much a typical Japanese craft.

Yabuki
What’s the basis for competing? What colors you make, how far the smoke rises, that sort of thing?

Niiyama
That’s basically it. The fireworks have parachutes so they leave a gently winding smoke trail as they fall, just like a dragon’s coils. Thick, dark colors is what they are aiming for. It’s an amazing spectacle with bright lights, smoke and sound.

Yabuki
Sounds a bit weird and quite quaint, huh? 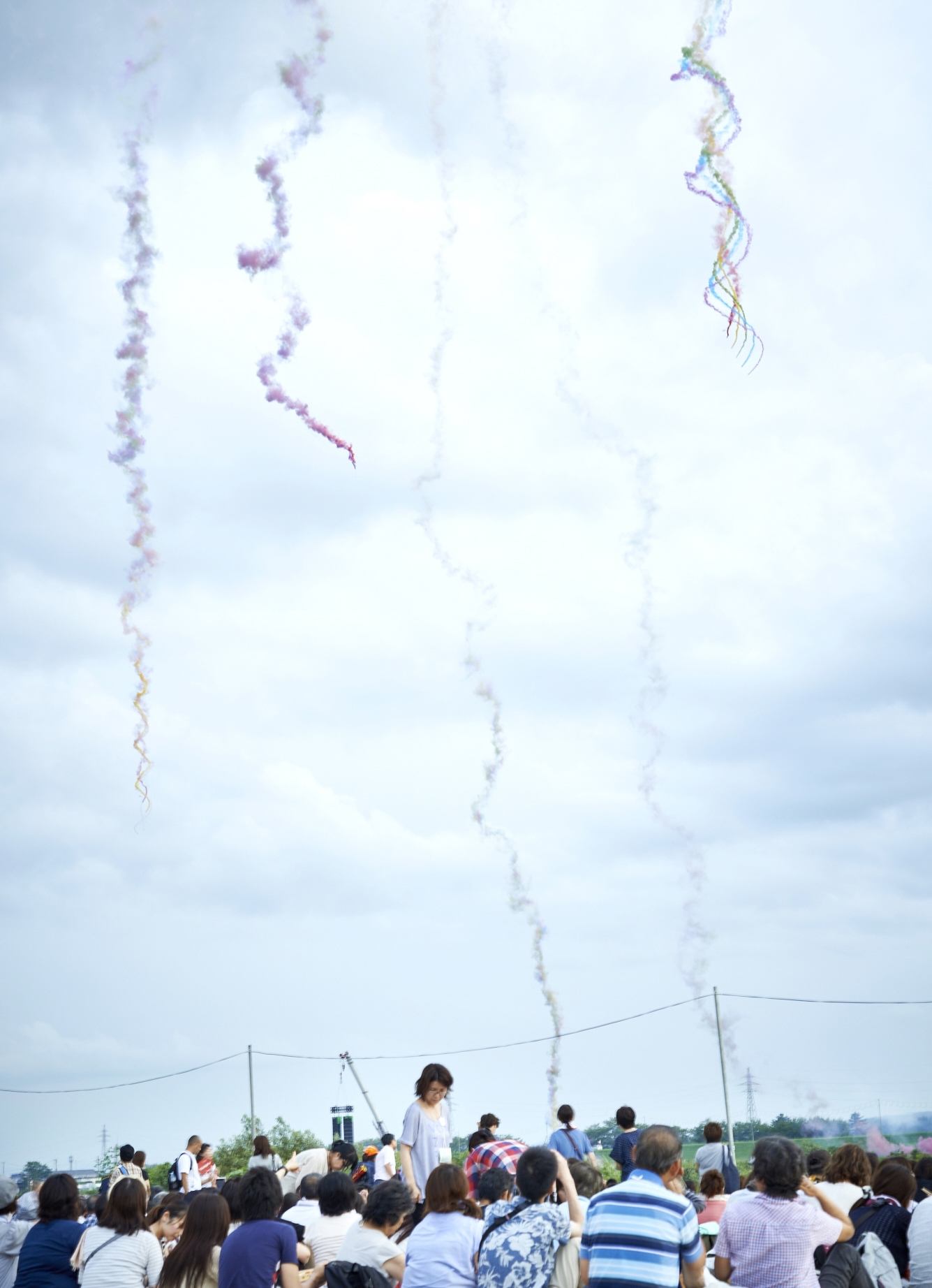 Niiyama
It is, you’re right! In the evening there is the competition for the ‘10-go dama shin-iri warimono’ [30cm multi-layered bursting firework], the ‘10-go dama no jiyu tama’ [30-cm freestyle shell] and the ‘Sozo hanabi’ [creative fireworks] categories.

Yabuki
Which do you think your company’s strongest category will be this year?

Niiyama
In the ‘10-go shin-iri warimono’ category, we’ve had a ‘yoeshin’ shell [four core]. That got us 3rd place last year.
‘Yoe’ means that when the firework explodes, you get four different colored layers spreading out in a circle. However, if you want to win the Prime Minister’s Award in this category, you really need an ‘goeshin’ shell [five core], otherwise you’re struggling. Only around three companies have actually managed a quintuple core firework up till now. 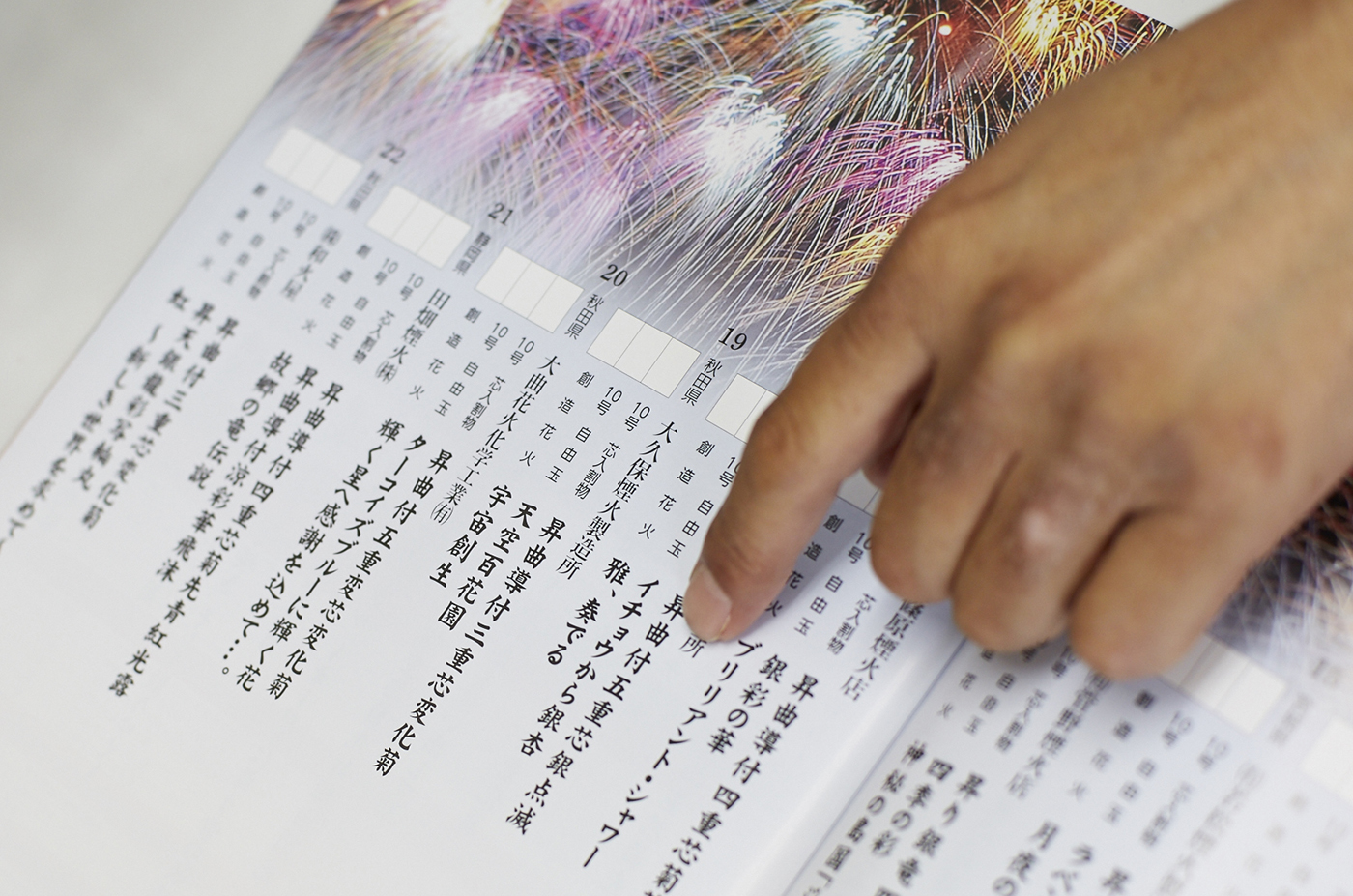 Yabuki
Wow! It’s that difficult is it?

Niiyama
It’s super difficult, it really is! You can’t really see all five layers clearly. You might think you’re just adding another core to the shell, but going from four layers to five layers is a completely different sort of challenge. Depending on how you adjust the amount of charge you put in, or how you adjust the paper you paste on the shell, this can make all the difference.

Yabuki
But you can actually have a ‘yaeshin’ firework, can’t you? That sounds like it has eight cores. That must be even harder to do?
[Note: ‘yaeshin’ is written as 八重芯 in Japanese. 八 is the character for ‘8’ ]

Niiyama
That’s misleading, because it actually means something different. In the first place, ‘shin-iri’ means there is one core inside the shell, in other words a ‘single core’ firework. If you have two cores inside one shell, we actually call that a ‘yaeshin’. It sounds as if it means ‘eight cores’ but it refers to a ‘double core’. When the double core firework was first made successfully, it was so difficult that no-one thought any more cores could ever be added. So that’s why the name, ‘yaeshin’ stuck.

Yabuki
Hmmmm. I get it. 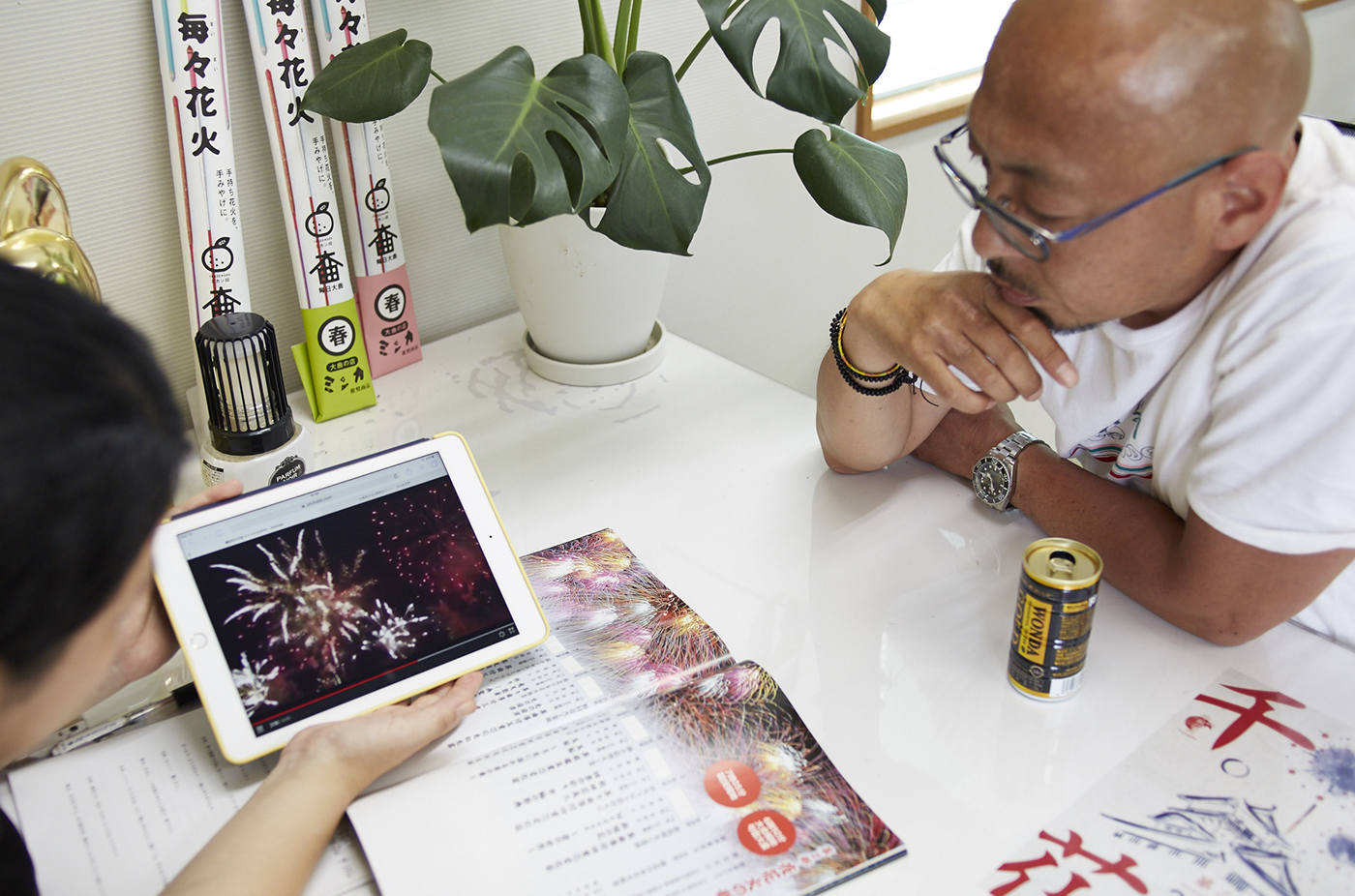 Niiyama
The ‘yaeshin’ firework was developed by Mr. Aoki’s fireworks company in Nagano. Mr. Aoki was my teacher when I worked there. When he looked into this again, he thought, “I wonder if I can add in another core?” and that’s exactly what he did. So although the name ‘yaeshin’ had stuck for the double core, when it came to naming the next one up, he called it ‘mieshin’ because there were three cores.

Yabuki
So what you’re saying is that ‘mie’ is bigger than ‘yae’, right?!
[Note: This is a pun. The ‘mieshin’ (three core shell) has one more layer than the ‘yaeshin’ (double core shell), even though ‘yaeshin’ when written in Japanese contains the character for ‘8’ 八 ]

Niiyama
And you can have four-core or five-core shell after that….

Yabuki
And the biggest so far is ‘itsueshin’ (five core).

Niiyama
Well, even making the double core is hard enough you know. But to the human eye, the double core looks to have the best balance. So that’s why it’s my absolute favorite type of firework. We’ve developed a new and rare turquoise color for the ‘10-go freestyle’ category, so we’re planning to debut that this year.

Yabuki
Blue looks really pretty in the night sky, doesn’t it? What about the creative category? How are you feeling on that?

Niiyama
The title of our display for this year’s creative category is ‘In appreciation of the stars shining brightly’. These are fireworks I’ve made for my old man.

Niiyama
Yes, my father and former head of the business. He died in February this year. 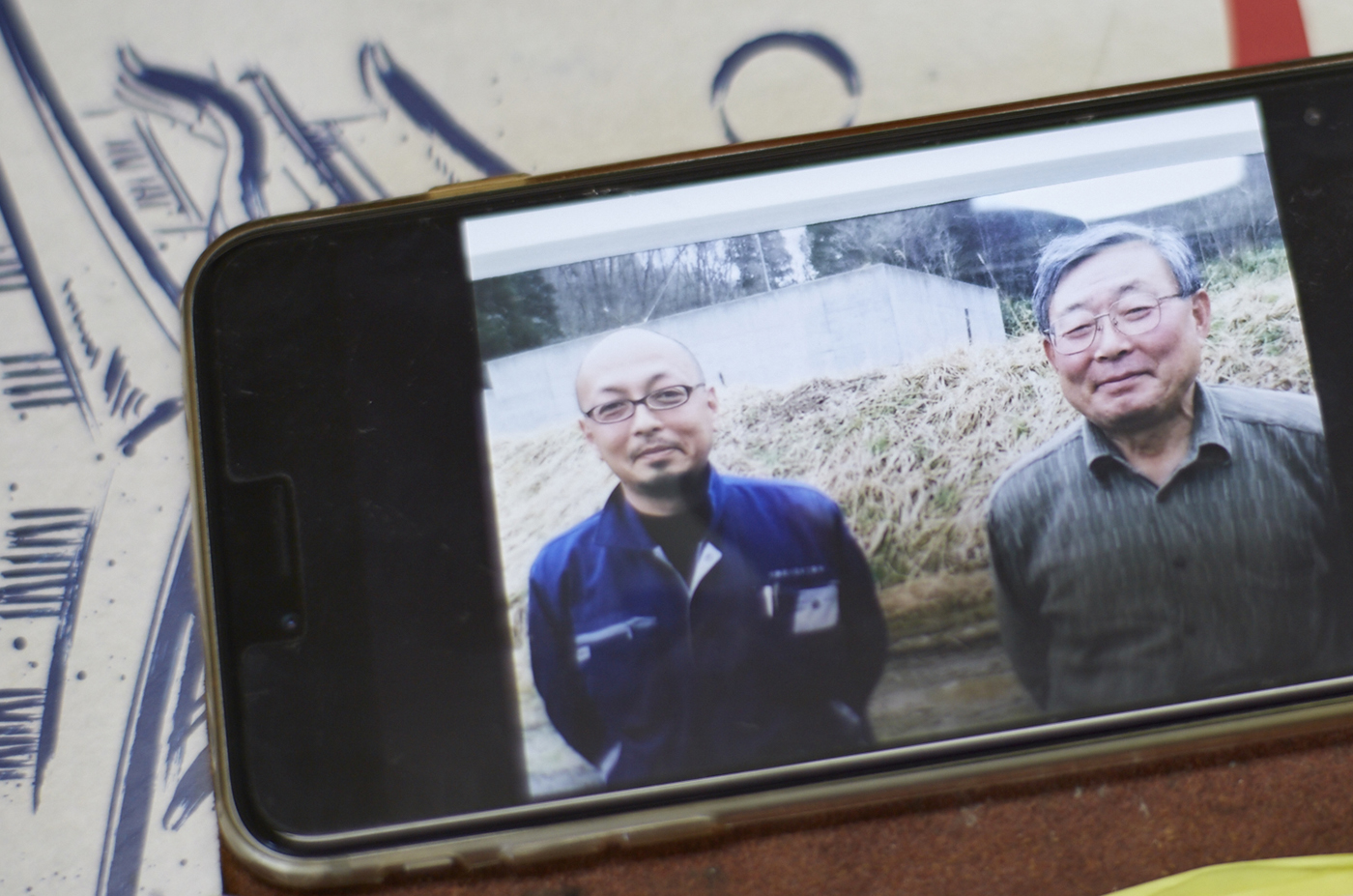 Niiyama
He was shovelling snow from the roof and fell off. It seems like he banged his head and knocked himself out, and then ended up falling into the river unconscious. Unfortunately, he drowned and died.

Yabuki
I’m so sorry to hear that. That’s terrible…

Niiyama
Naturally, I’d like to win the Prime Minister’s Award, so I’m keen for the judges and the audience to see our fireworks, but from a personal point of view, I also want my Dad up in Heaven to see them too.

Yabuki
Because he was your mentor as a pyrotechnician, wasn’t he? What are your memories of him and of what he taught you?

Niiyama
I don’t really remember ever being shouted at by him, he was generally a very kind person. His main responsibility was daytime fireworks. He was always winning the top prize in competitions. Now, even though we try, we still don’t always manage to get the colors that we want in our fireworks. It’s a bit late now, but I wish he could have taught me a bit more!

Yabuki
Did your father participate in this event up until last year? 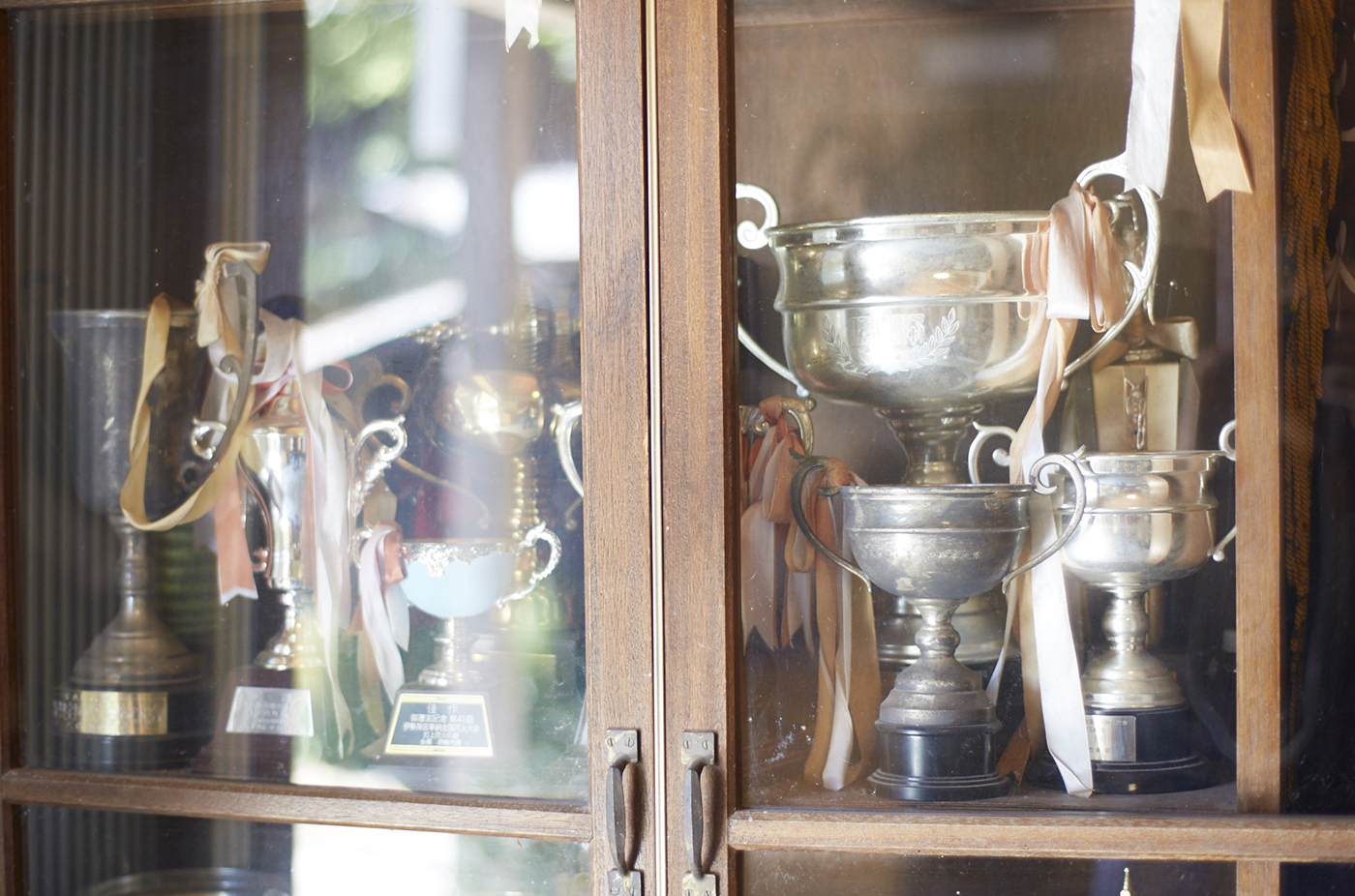 Yabuki
How old was he?

Niiyama
69. He was still very active, coming into work every day and even doing overtime on his own. At the moment, it’s the Fireworks Industry Concept Conference in Omagari, and you see fireworks going off everywhere in the area. In April next year the International Symposium on Fireworks is going to be held in Omagari, and there’ll be a fireworks display every day of the week. He’ll miss all of this. Only just before he died he said, “I’m still active and plugging away, so there’s no reason why you guys shouldn’t be feeling the same way too!”

Yabuki
It’s such a shame that this happened to him, isn’t it? 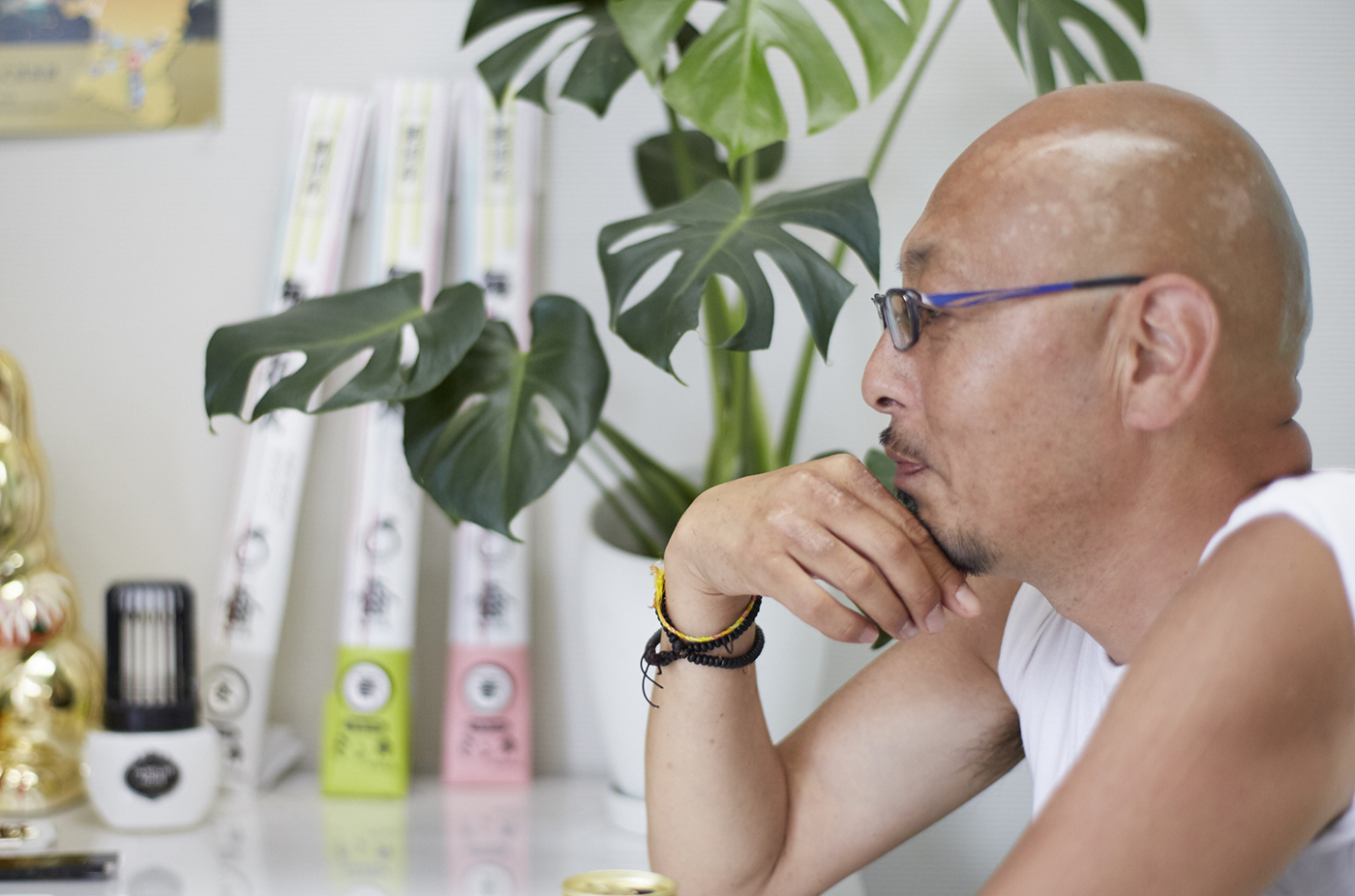 Niiyama
It all happened so suddenly. I’ve got plenty of regrets about how things could have been different, like “If only I’d done this…” or “I wish I’d done it that way….” But maybe it was always meant to be this way. I let off mourning fireworks after the funeral. I feel a bit calmer now since it happened, but recently, with the competition getting nearer, I’ve really felt like I want to see him again. I loved the old guy.

Yabuki
This year’s fireworks are going to be particularly special for you, more so than in previous years, I think.
I guess everyone has their own reasons and motives for participating. Here’s to a really successful event! Best of luck to everyone! 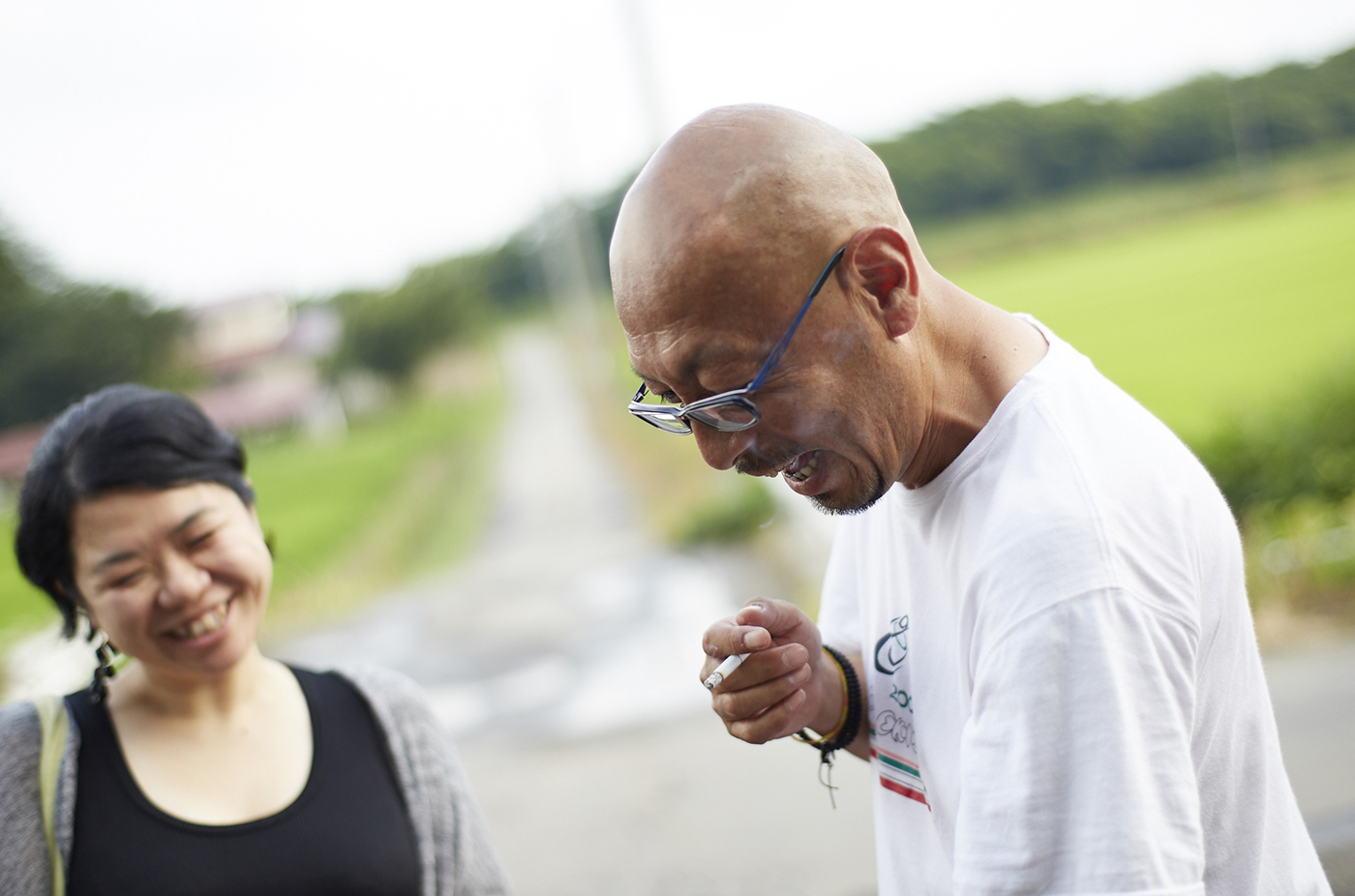 Next time, we’ll finally be reporting to you on the day of the Omagari Fireworks as the event gets underway. Around 700,000 people on average visit every year. We’re going to tell you more about the different fireworks which the pyrotechnicians have made so painstakingly, and we’ll bring you the thoughts of Mr. Niiyama. 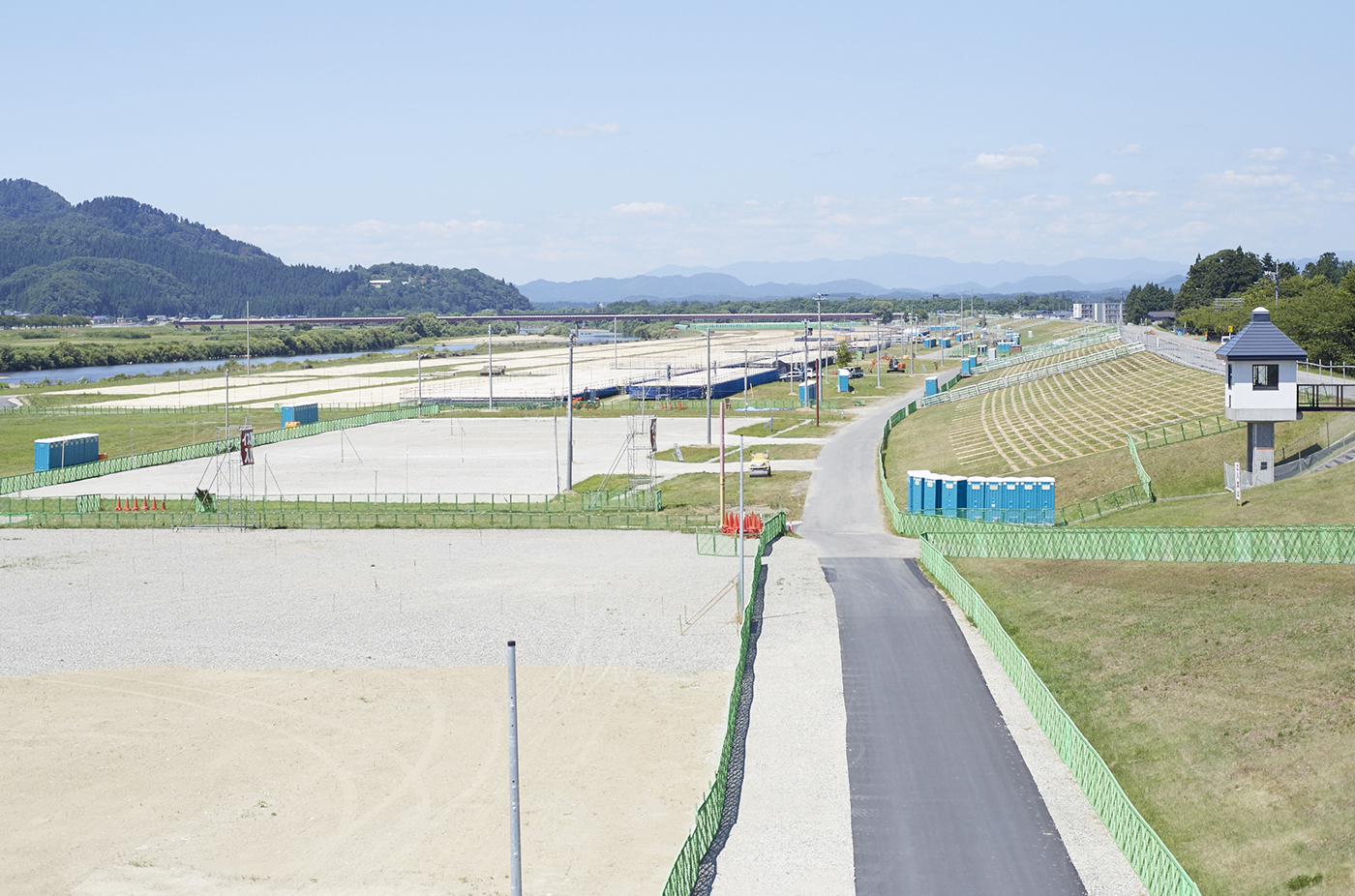