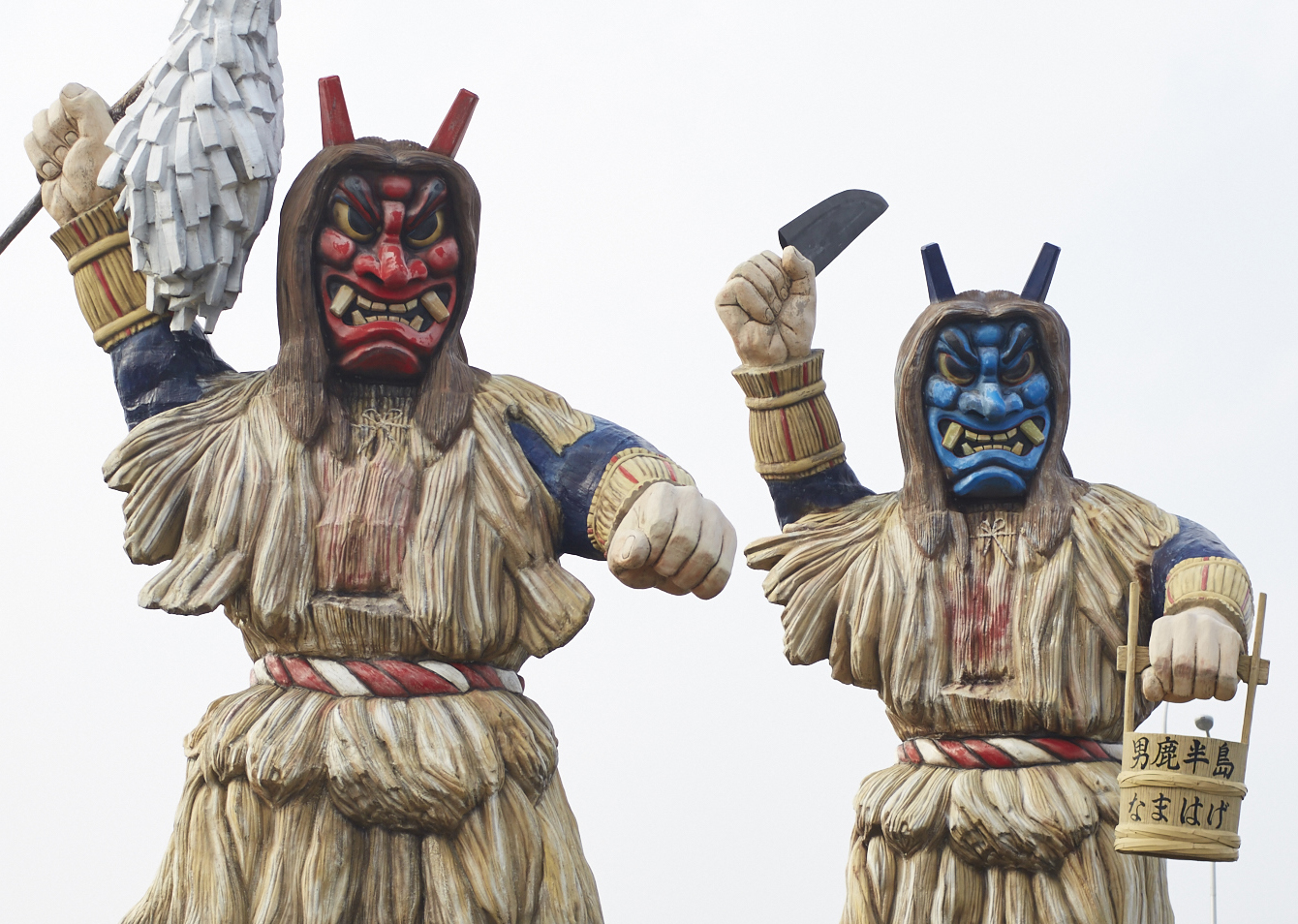 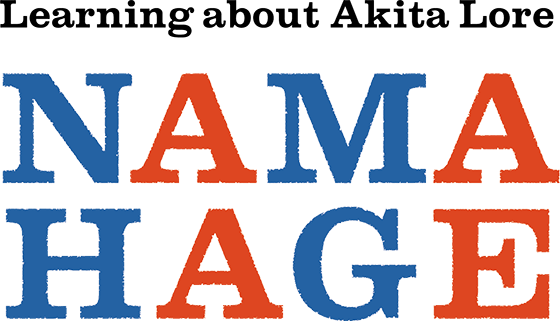 One of Akita’s typical traditions is the ‘namahage’, a ritual event handed down and enacted every year in Oga City. Menacing ogres come to people’s houses, shouting angrily, “Are there any crybaby children here?” It’s a powerful image, but in fact this is what is called ‘namahage’. However, there is more to it than just this. This month we’re looking to find out a bit more about Akita’s ‘namahage’ ritual.

We’ve arrived in Oga and have made our way to the Oga Shinzan Folklore Museum. Wherever you look – monuments, bridges, and signboards – you’ll see ‘namahage’ motifs. Here you can watch a re-enactment of the ‘namahage’ New Year’s Eve ritual all year round, and get to meet the ‘namahage’ as well. Today, the place is full of tourists from the capital area! Meeting the ‘namahage’ will make your heart pound, but before that, our guide is going to tell us about this ritual. 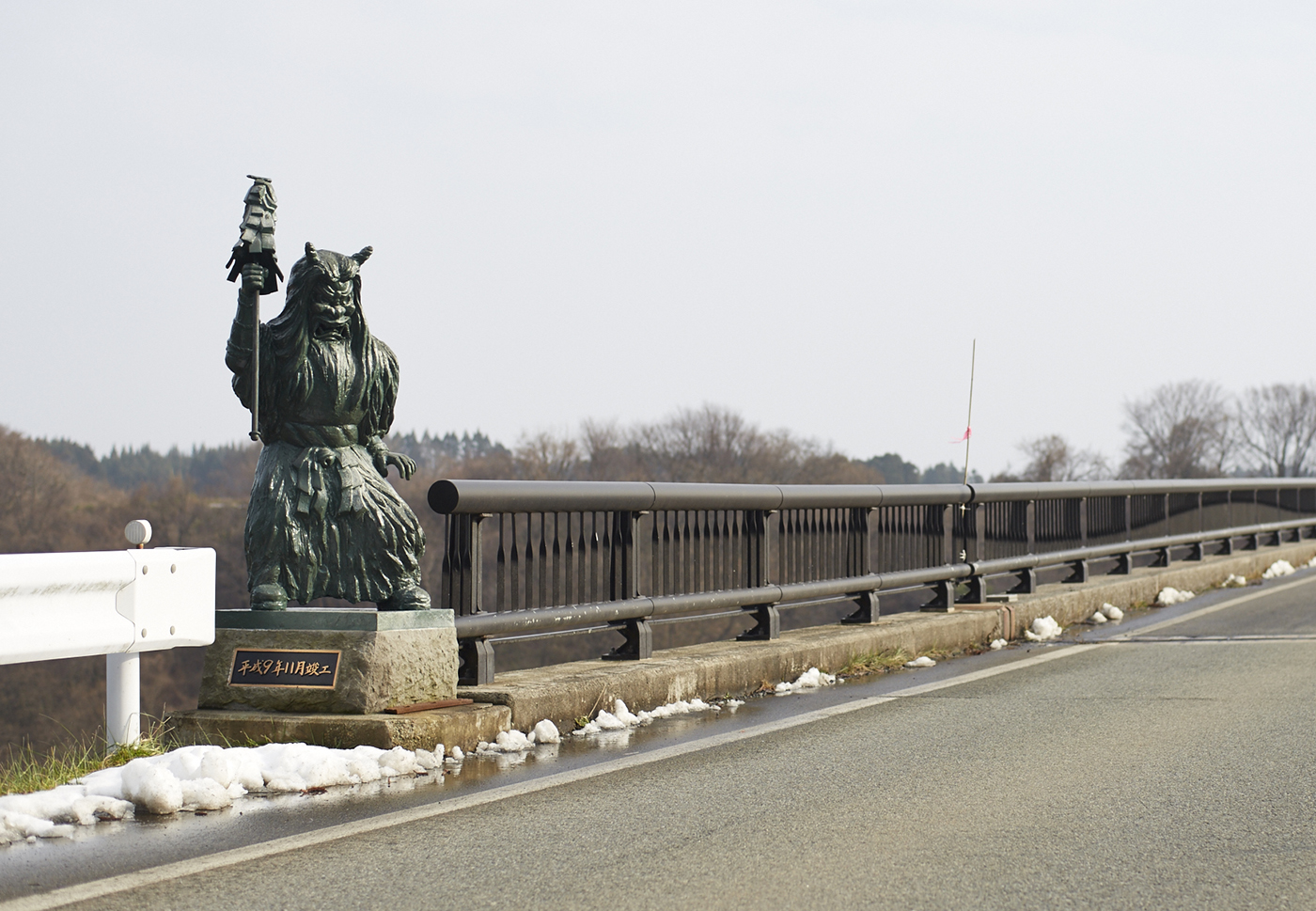 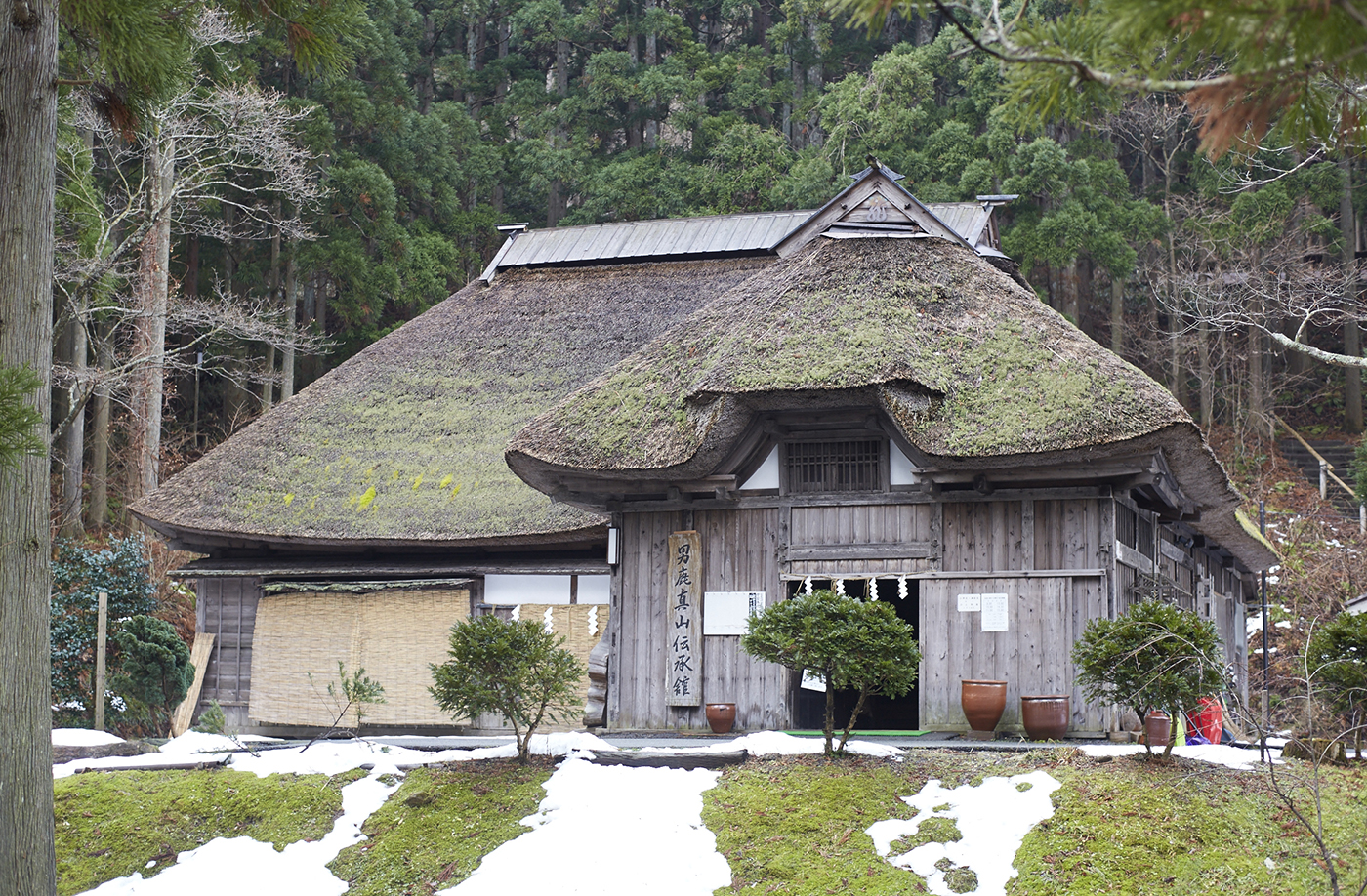 Guide’s introduction
The origin of the name, ‘namahage’, is as follows. In the Oga region, the red marks or blisters you get on your hands and feet if you sit near the stove are called ‘namomi’. The tradition goes that lazy people often get ‘namomi’ because they spend so much time sitting round the fire. Peeling these ‘namomi’ as a way of keeping busy or guarding against laziness is called ‘namomihagi’ (peeling off blisters). The word has been mispronounced, and has become ‘namahage’. 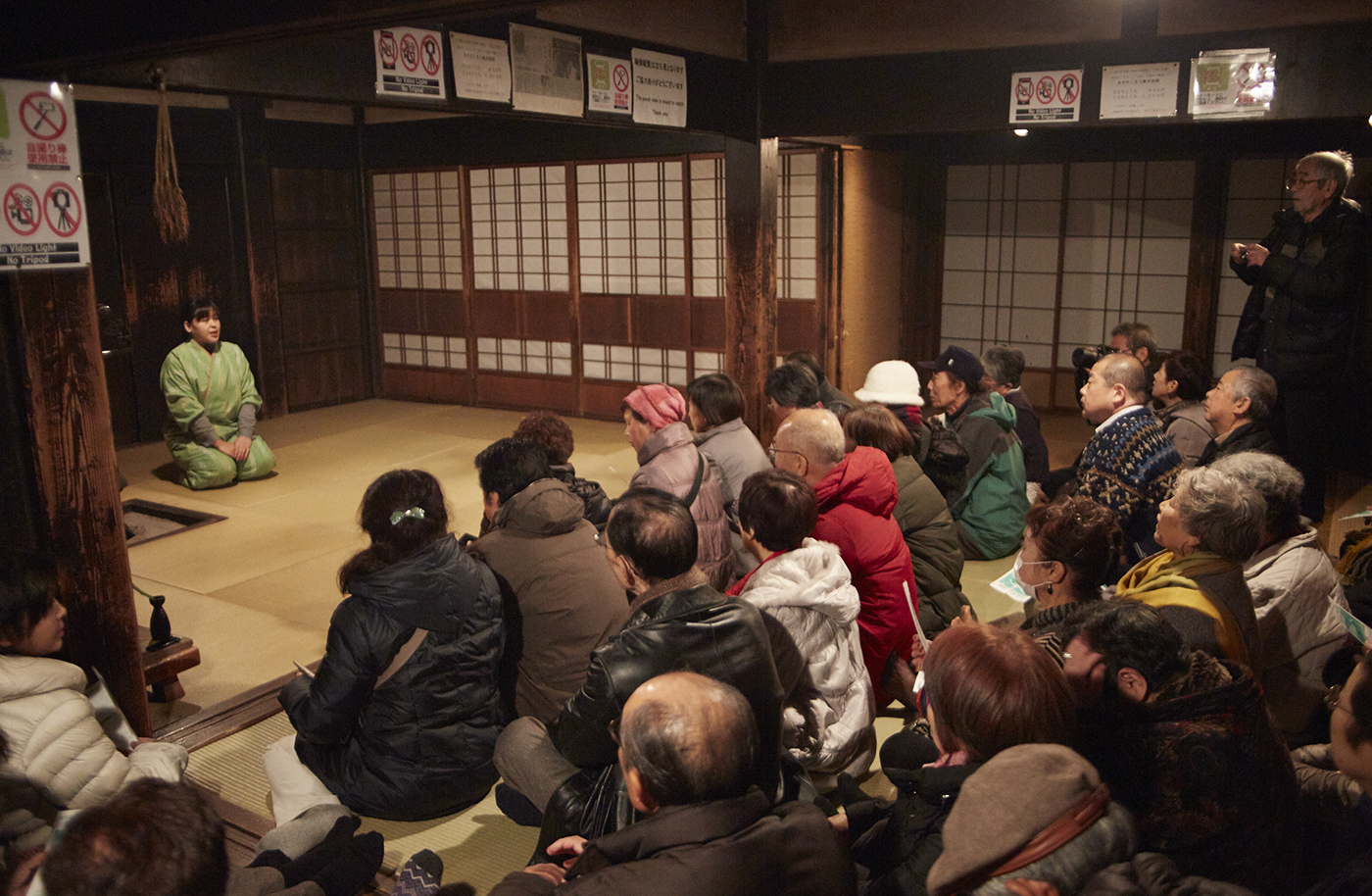 The ‘namahage’ ritual used to be held on the evening of January 15th (‘koshogatsu’ – ‘Little New Year’), but in most villages it is now on New Year’s Eve, December 31st. Although it depends where you are, in the Shinzan area the participants typically walk round in groups of three: two ‘namahage’ ogres, and a ‘sakidachi’ leading the way to announce their arrival.

When they get to a house, the man in front checks with the family that it is OK for him to bring the ‘namahage’ in. If there has been a birth in that house that year, or else some loss, then the custom is that they do not go inside. The ‘namahage’ ogres stamp their feet ceremonially seven times before they enter. 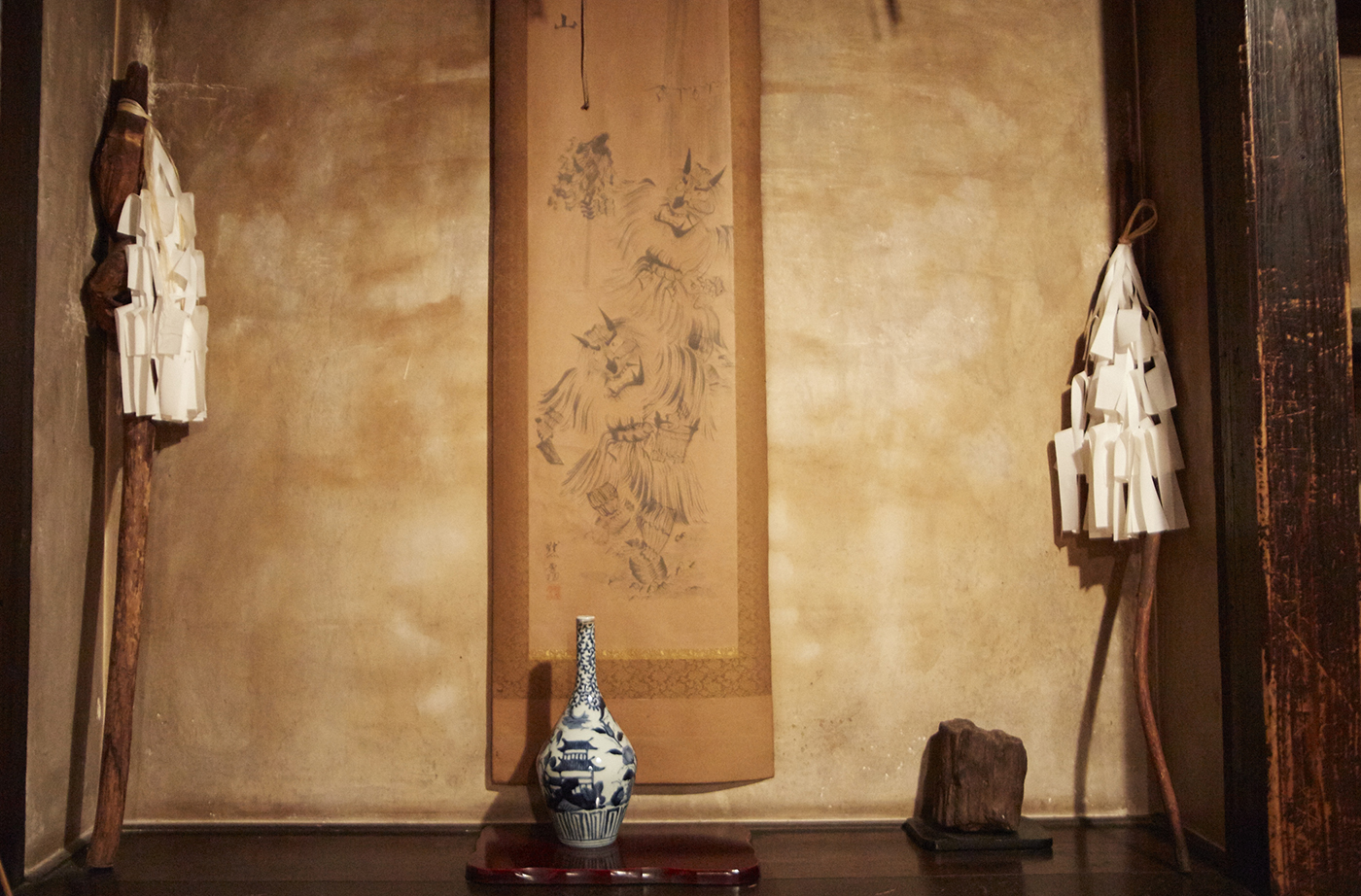 They ask in a loud voice “Are there any lazy people here? Any crybabies?” and knock on the door. Then they search all over the house. It is said that making a commotion like this will expel evil spirits from the house. Since it is New Year, the master of the household invites the ‘namahage’ to have something to eat from the ‘ozen’ [a four-legged tray for festive food]. They stamp their feet again five times and come over to eat. The ogres ask the master questions, and he answers them. When they have finished, they stamp their feet again three times and have one last look around the house. The number of times they stamp their feet on each occasion (starting with seven, then five, then three) is significant because these are said to be lucky numbers. The Shinzan ‘namahage’ do not have horns, since they are said to be mountain spirits. 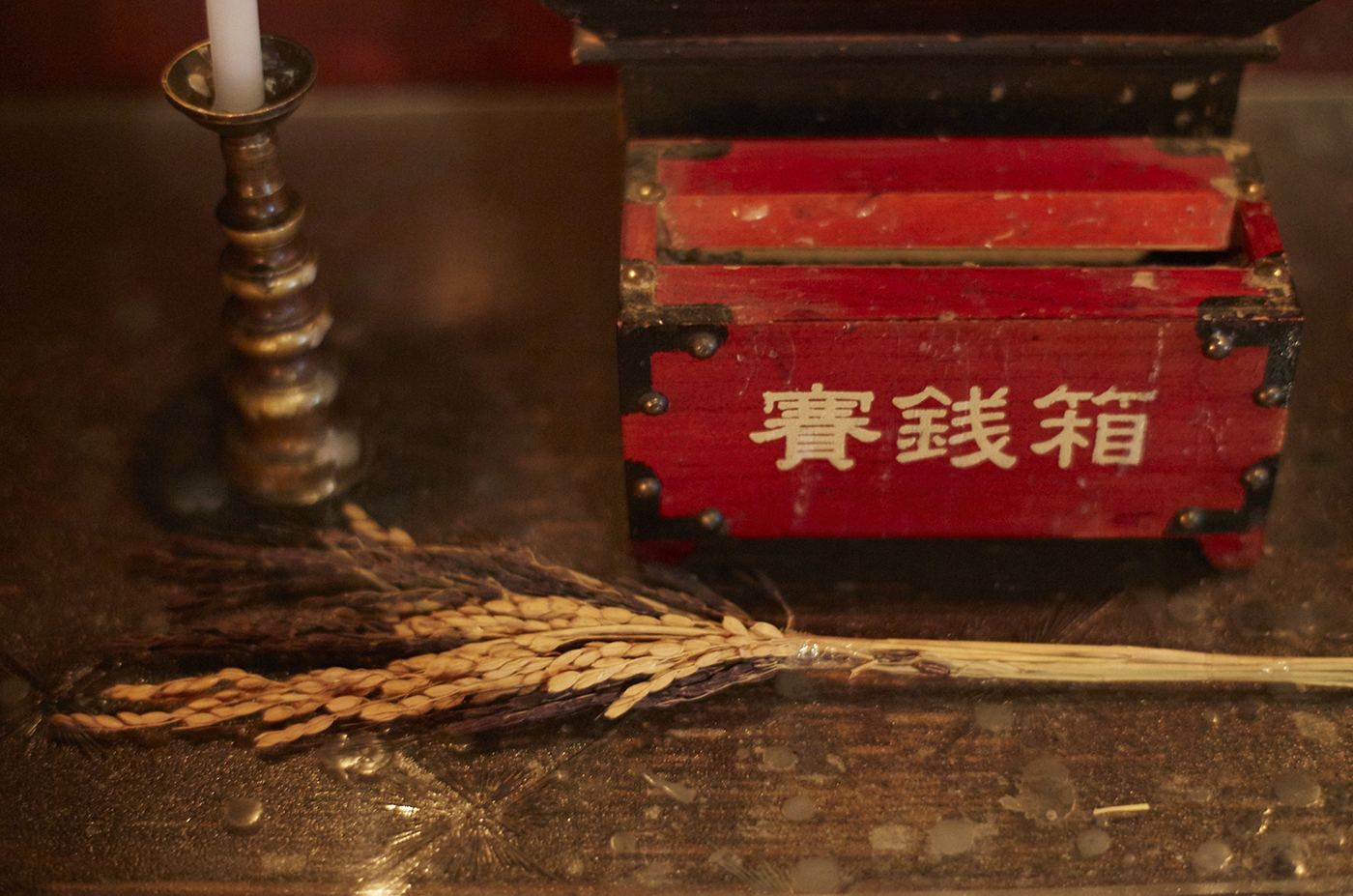 When the ‘namahage’ are searching round the house, straw falls off the ‘kede’ [straw capes] that they wear. The family leaves the straw on the floor overnight and do not tidy it up, since there are said to be spirits in the straw. The tradition goes that if you wrap a long piece of straw round your head it makes you wise, or it prevents you from catching a cold. However, any straw which is pulled off the ‘kede’, rather than just dropping off, will not have the same effect, so we would ask you to refrain from pulling the straw yourself. 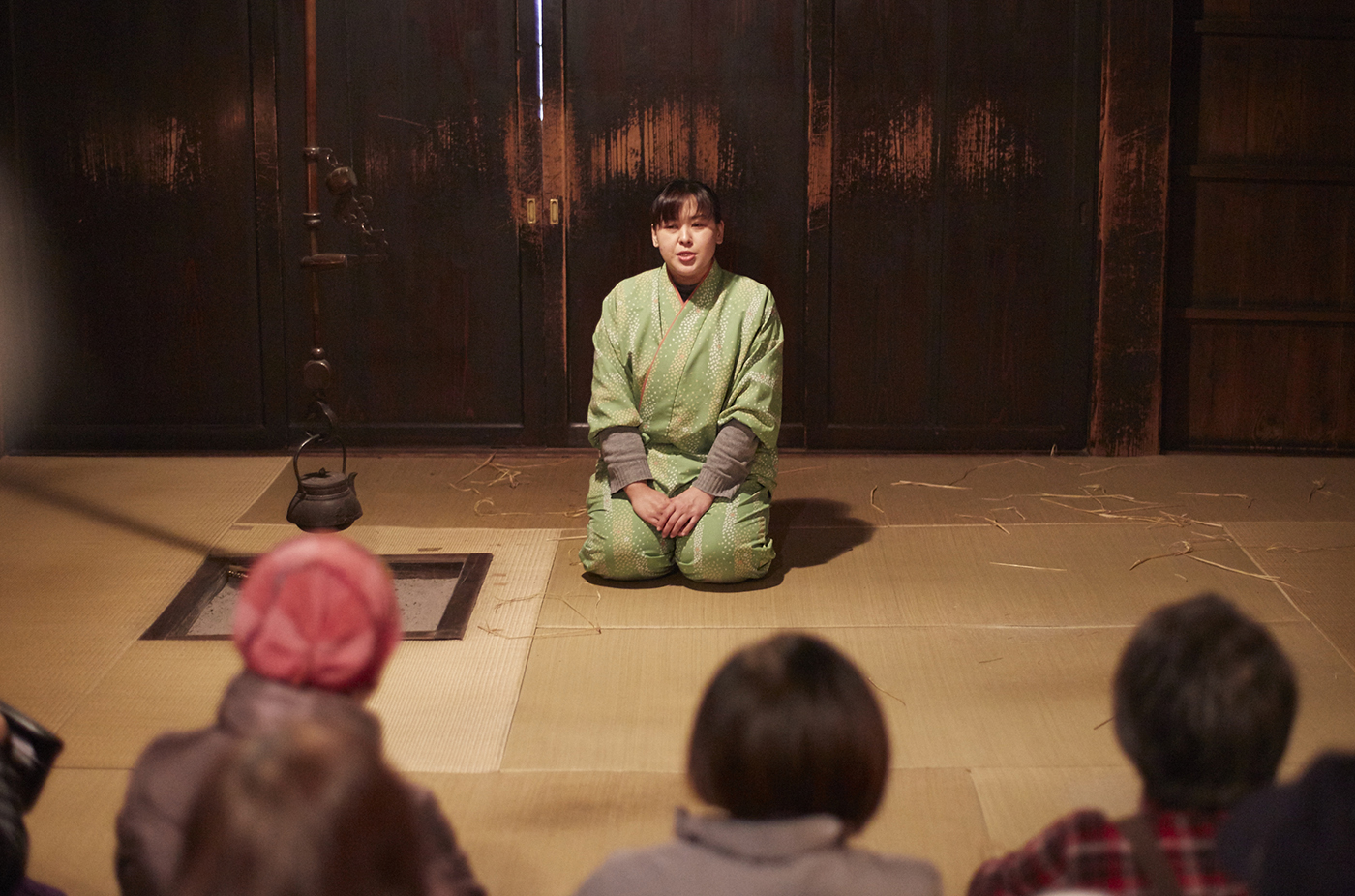 Now, I think the ‘namahage’ will be here soon, so I’m going to stop at this point. 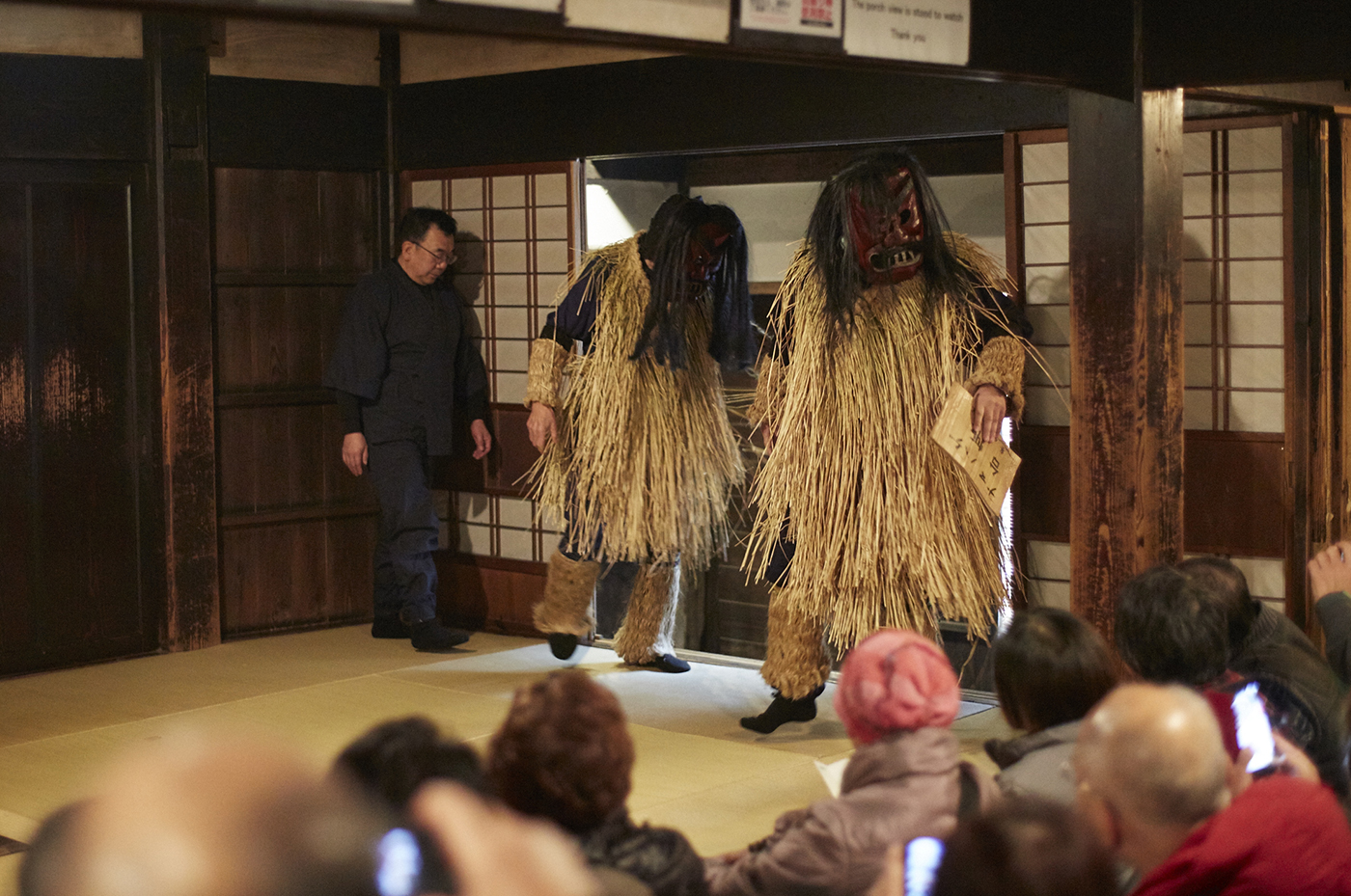 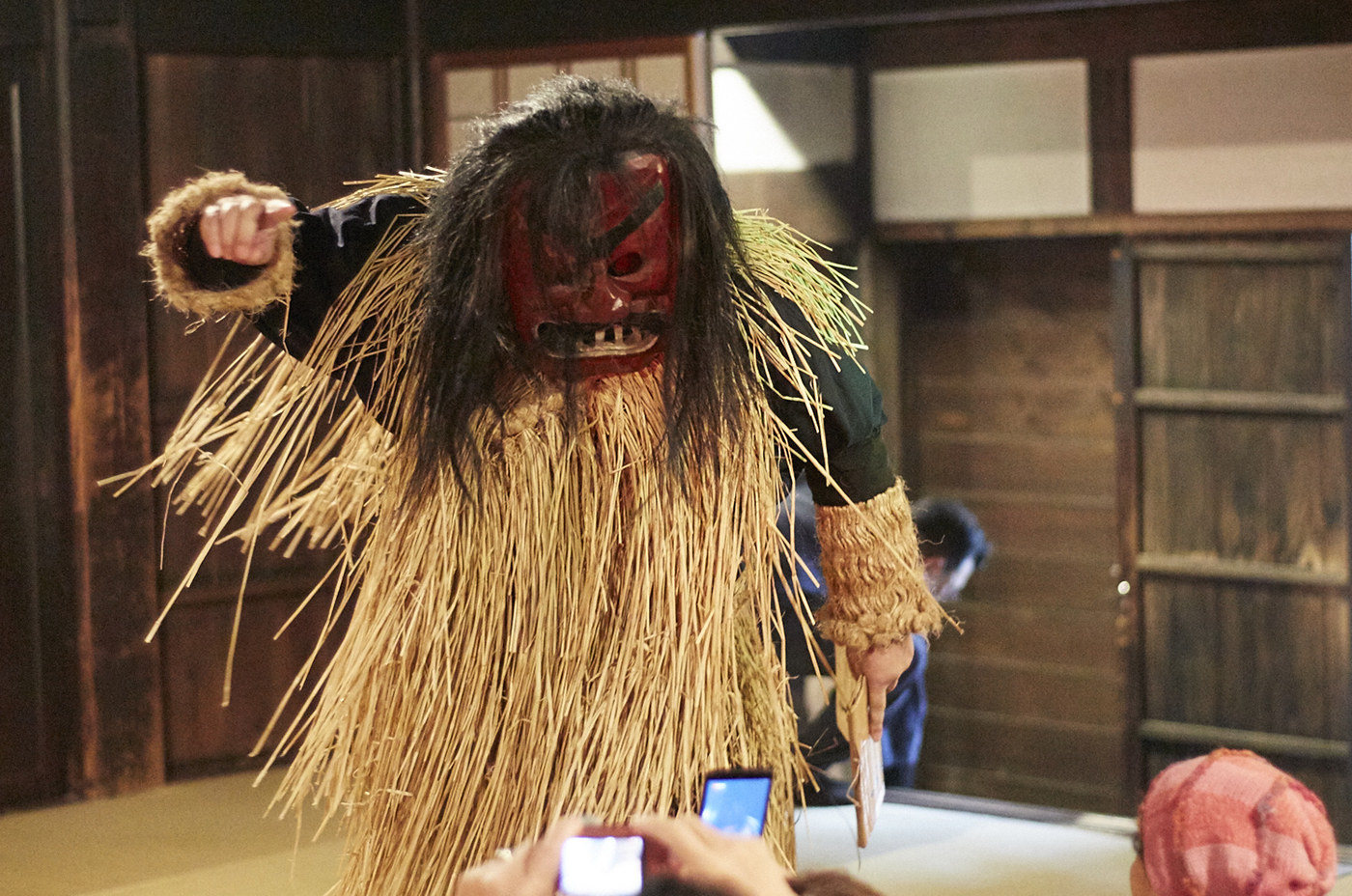 After the appearance of the ‘namahage’, there was a buzz of excitement in the hall. I had a chat with a couple who had come on a sightseeing visit and spoke to Mrs. Toshiko Nagai to start with. 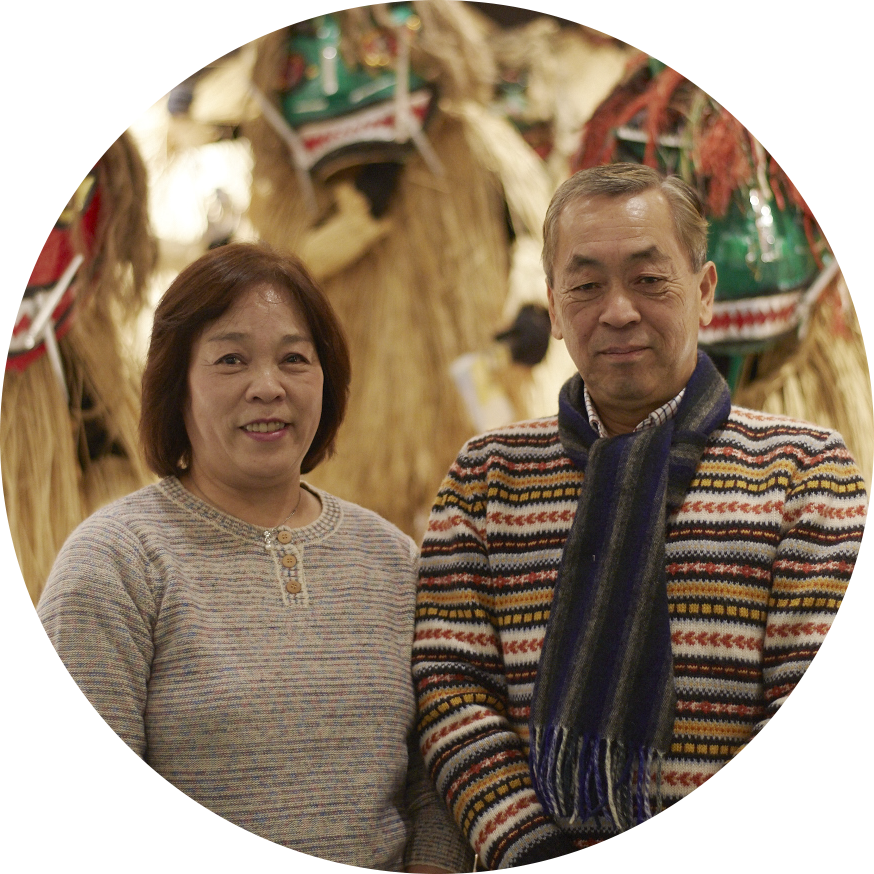 Nagai
That was great. I loved it! We’ve come here on a tour from Chiba. This is my first visit.

Yabuki
What did you think about the ‘namahage’? Do you have a different impression of them compared to what you thought before?

Nagai
Yes, I do! They were much cuter than I expected! I thought they were naughty and mischievous. Because it’s an old tradition, I’d expected them to be a lot more prickly and irritable.

Yabuki
The questions and answers are quite fun, aren’t they?

Nagai
Yes, definitely! When I was child growing up, if an adult said to me, ‘If you don’t behave, an ogre’s going to come and tell you off’, I’d think ‘Ahhh! Oh no!’ This is just how I imagined it would be, you know what I mean? My grandchildren are going through a bit of a difficult phase at the moment, I’m going to show them some of today’s photos. I’m looking forward to seeing their reaction! (Laughs) 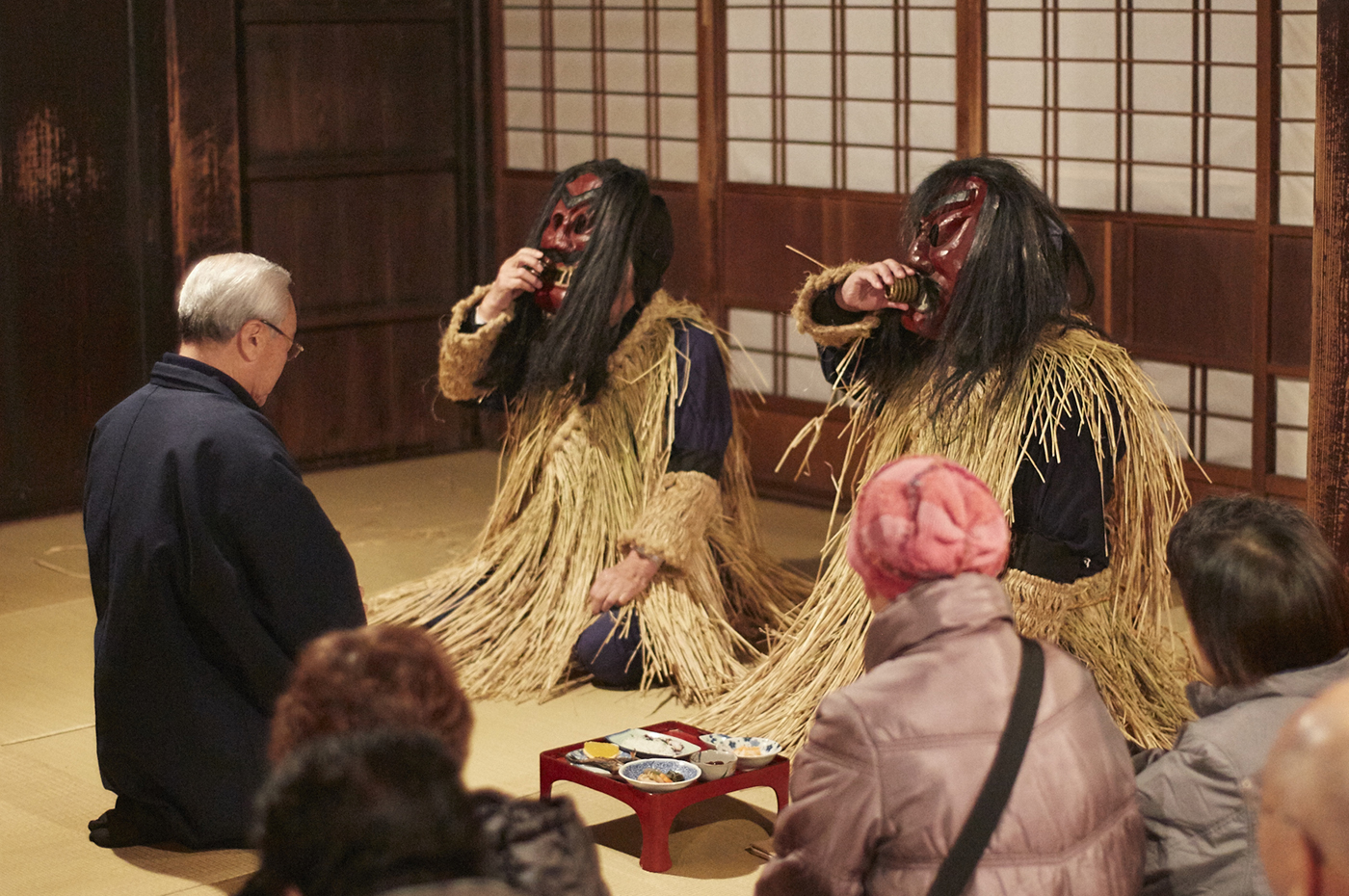 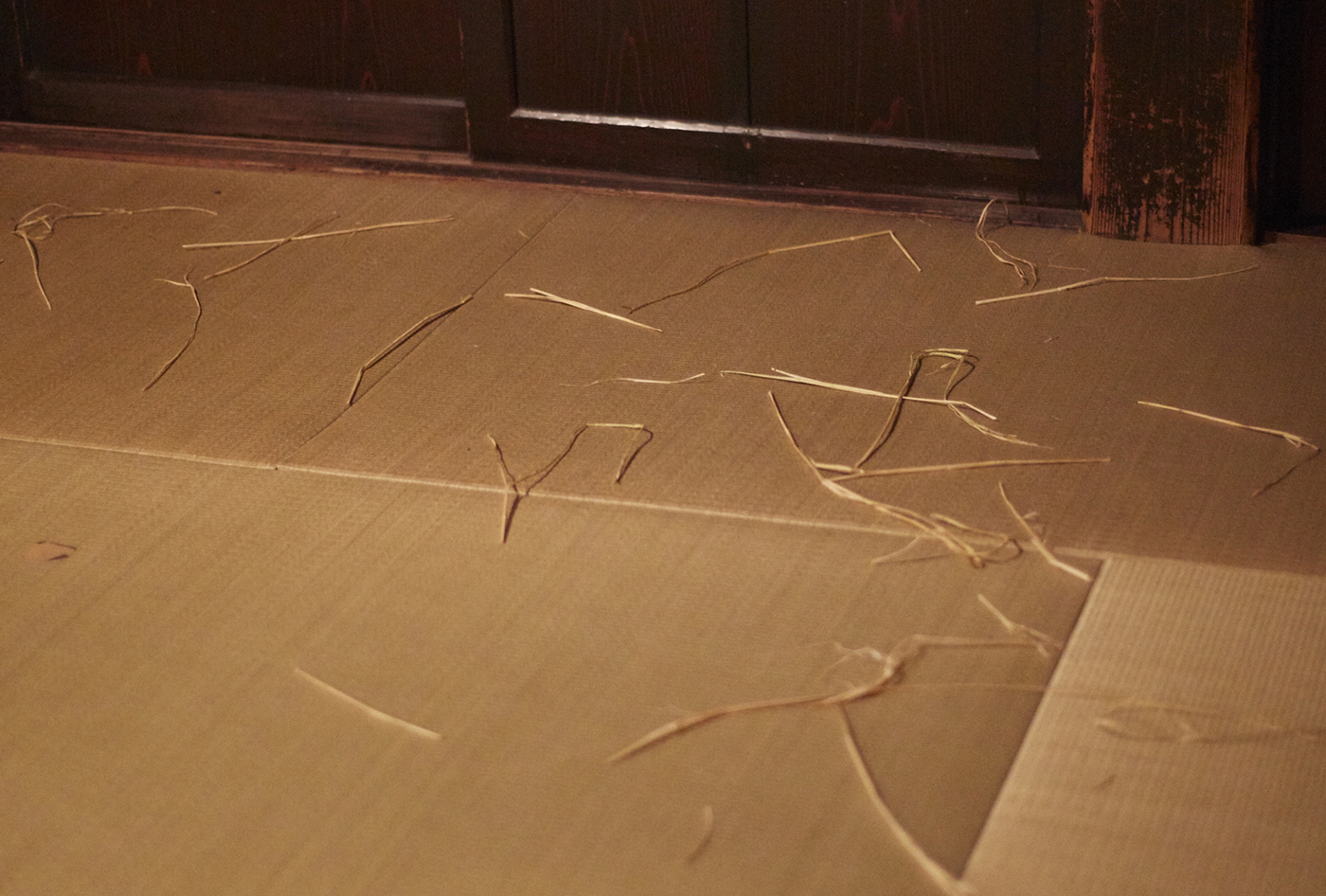 Now we move on and go to the ‘namahage’ museum next door to the folklore museum. Here you will find footage and pictures of the ‘namahage’ ogres. There is also an area where you can dress up as an ogre yourself. However, the highlight is the ‘namahage’ display where different ogre masks used for the ritual in various parts of Oga are exhibited. 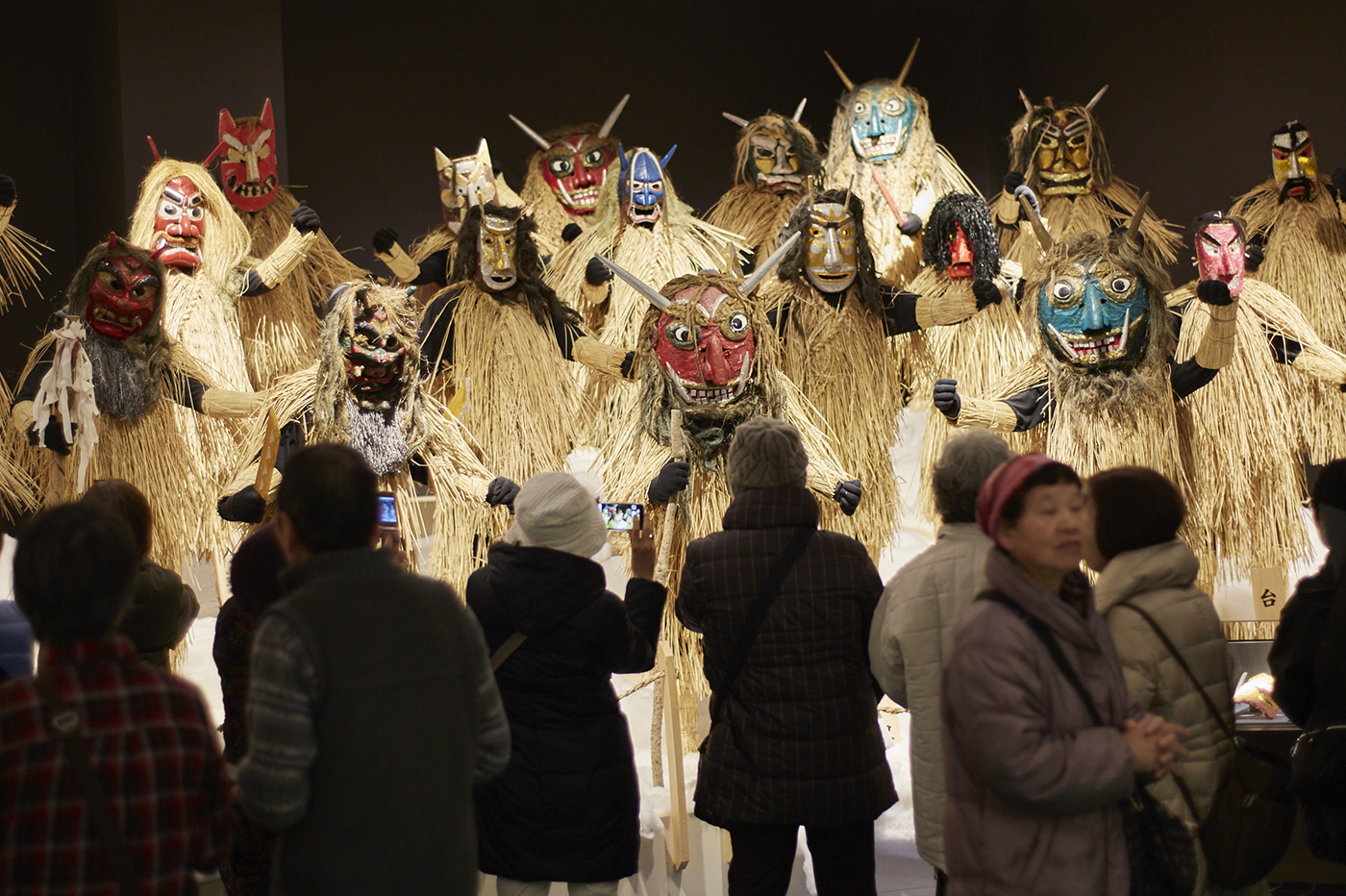 A talk by today’s commentator, Tadashi Ota
As you can see, we have a whole range of different masks on display here. These are the actual masks used in ritual events in various villages. We’ve got 150 masks from 60 villages on show here. A ‘namahage’ does not have a set face or features, as you can see. The masks vary widely from village to village. The villagers make them by hand, using customary materials, whatever they have available. Some of the older masks here are said to have been made about 300 years ago. Even today, we use about 30 masks from here for the New Year’s Eve event. 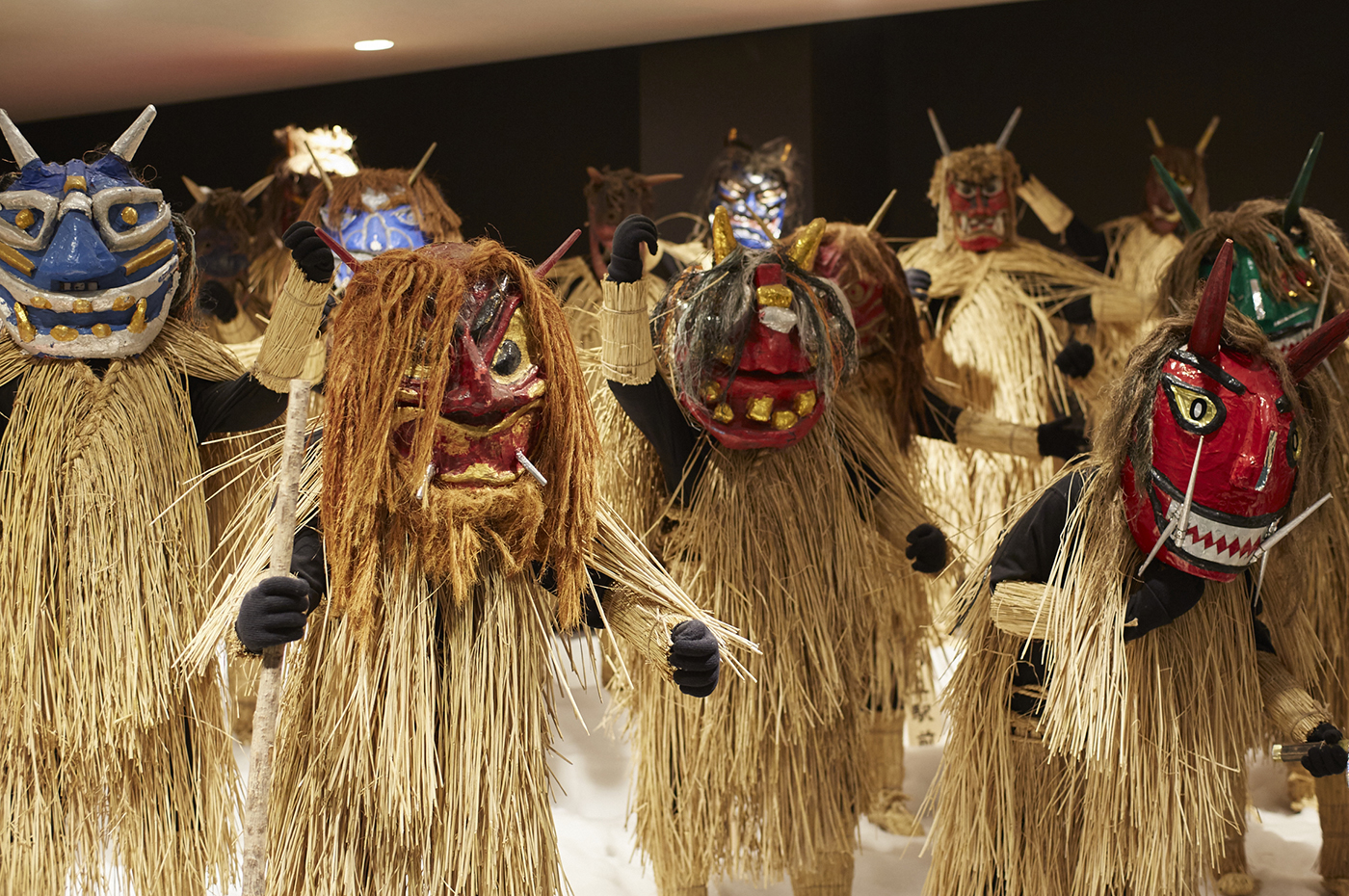 The straw costumes which the ‘namahage’ wear are called ‘kede’. New garments are made in the villages every year. The ‘namahage’ promise a rich harvest or a plentiful catch for the fishermen, so we use long pieces of good quality straw from a good harvest for the new ‘kede’.
This event has been made a national ‘Important Intangible Folk Cultural Property’, although the date of the ritual’s origins and various details about it remain unclear. 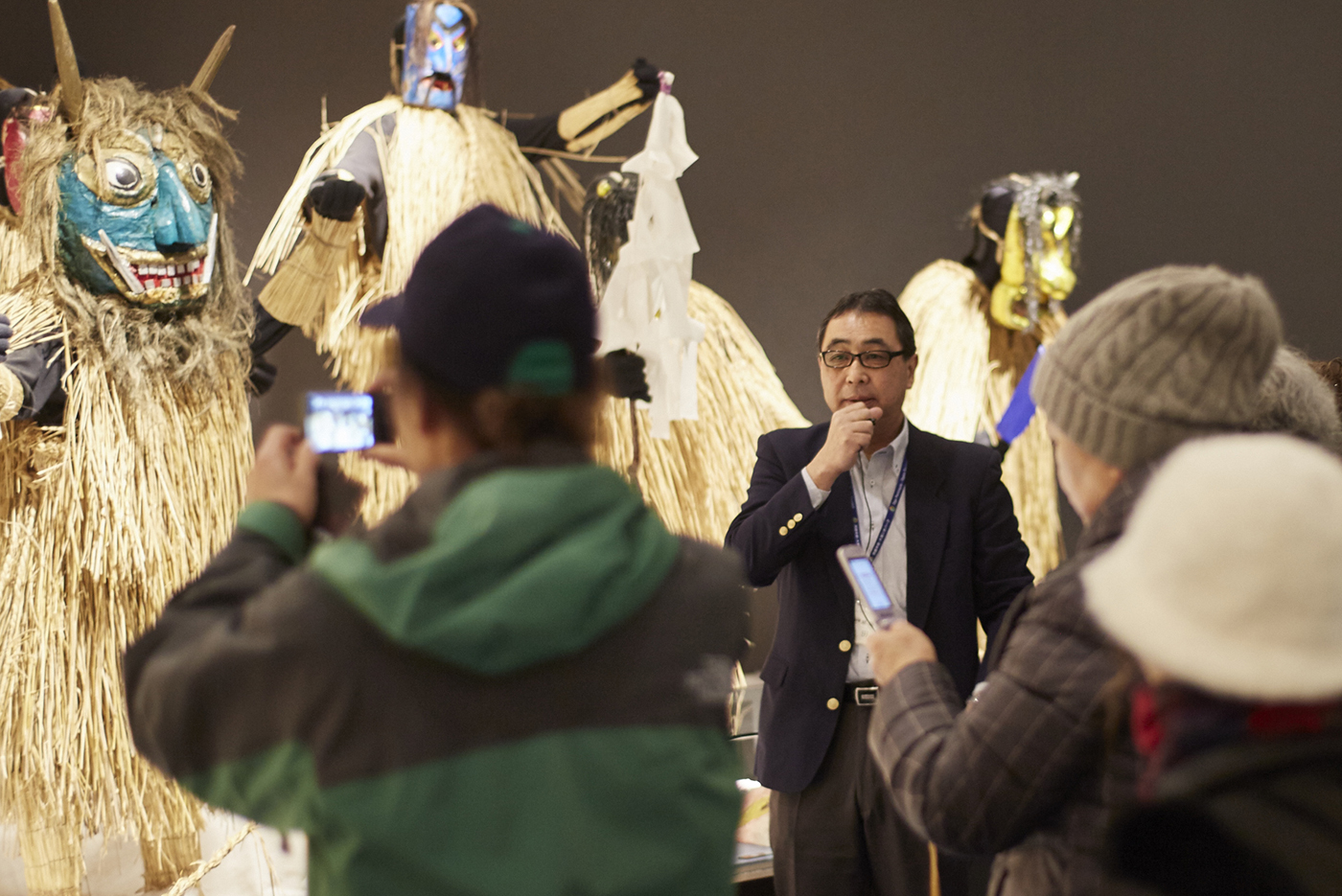 After his commentary was over, I spoke to Mr. Ota again.

Yabuki
There are so many masks here, aren’t there!

Ota
Yes, it gives people a bit of a shock when they first walk in! They think, ‘How strange! Are all of these ‘namahage’?’ Generally people think that ‘namahage’ only have blue or red masks with horns.

Yabuki
Although I live in Akita, I didn’t realize there were so many different types of masks!

Ota
The masks are important, but I also think the dialogue between the master of the house and the ‘namahage’ is important. I think it’s easy to be under the impression this is just about drinking and being rowdy! There’s a lot more to it than that. 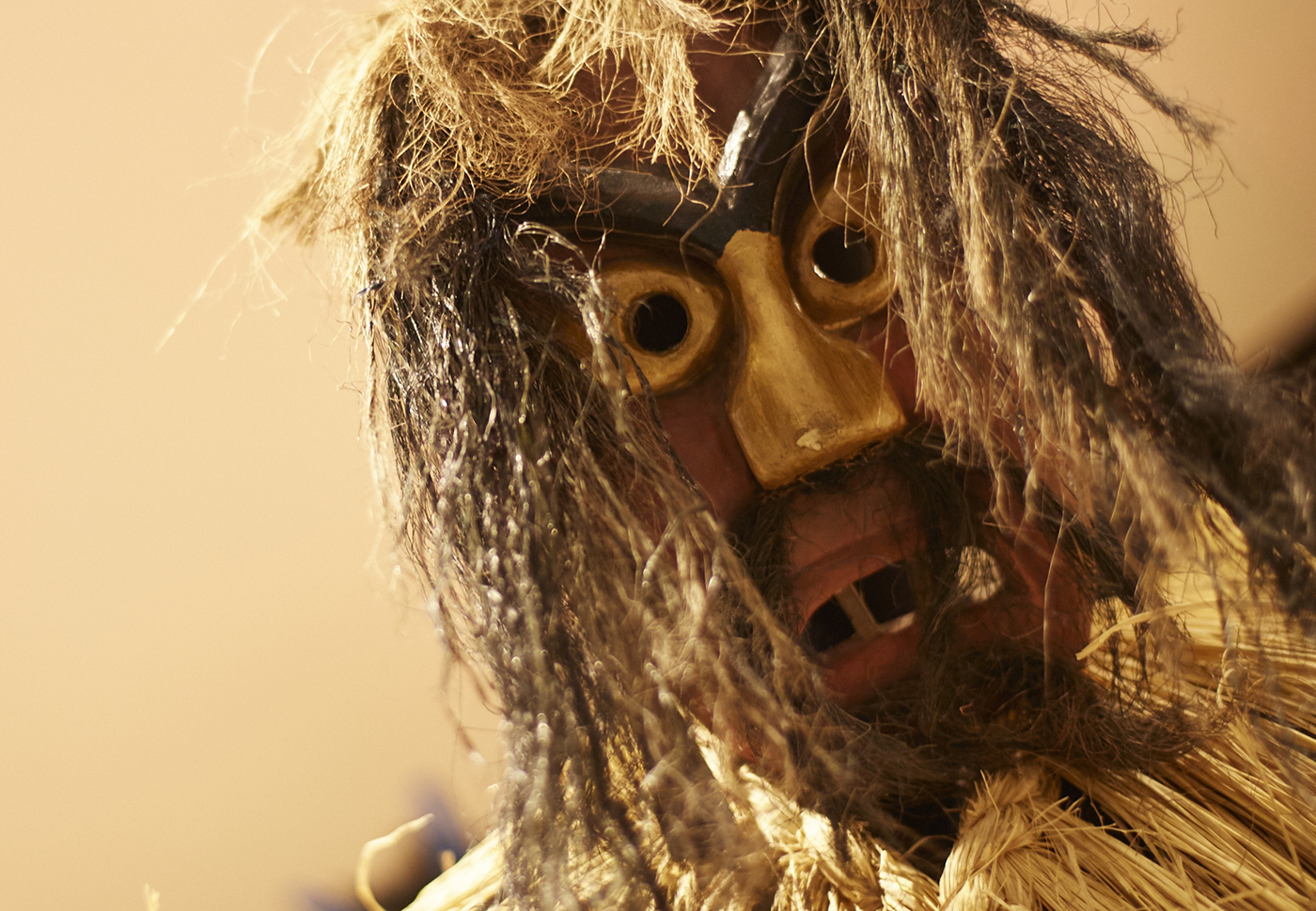 Yabuki
In the question and answer dialogue that we watched in the folklore museum, as well as telling the children off, the ‘namahage’ also showed concern for the family’s health and welfare, and spoke about the state of the crops and what was going on in the fields.

Ota
Yes, it’s not just about shouting at the children. The ‘namahage’ tell everyone, ‘Don’t be lazy, don’t do anything bad, toil hard, live a fulfilling life as much as you can, and help and cooperate with each other’. If you do this, then you’re bound to have a happy and prosperous year. That’s basically the gist of what they are telling us.

Yabuki
Yes, I get it!

Ota
It’s about practicing how we should live our lives as people. Times may change, but these values are what we should respect and keep in mind. That’s why this is an important ritual for adults as well as for children. This is the reason why the tradition has endured for such a long time. 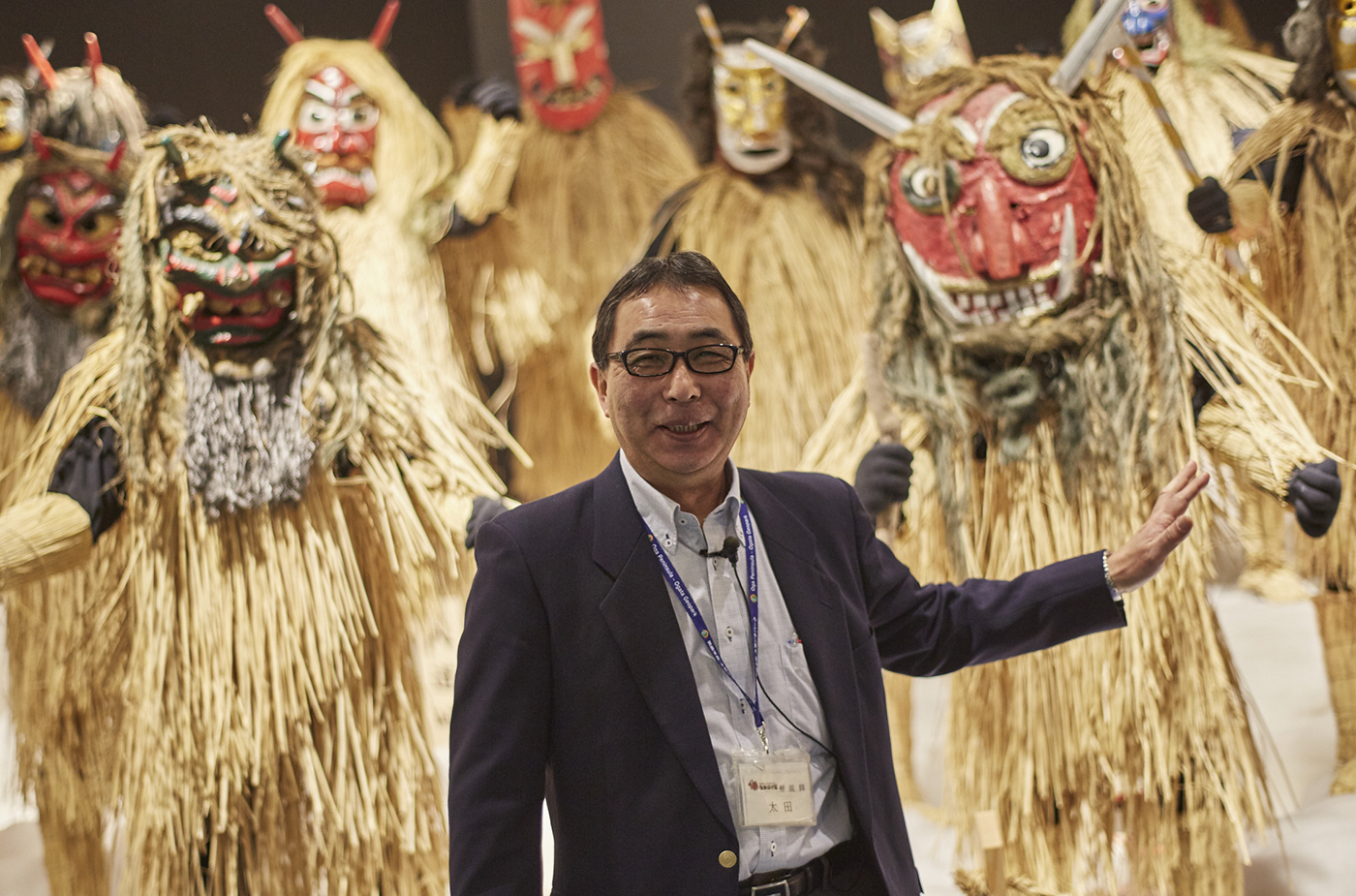 Yabuki
Do you take part in the ‘namahage’ ritual yourself?

Ota
Sure! Even though more and more houses don’t participate these days – it’s a sign of the times.

Yabuki
I thought as much. Is it because there are fewer children around these days?

Ota
That’s right. As well as that, fewer people want to play the part of the ‘namahage’, and more and more people don’t want to let the ogres in. They say it’s because they’re busy for New Year, and if ‘namahage’ come in they’ll make a mess of the house.

Yabuki
Really?! Is that what they say?

Ota
Some families say it’s because it’s a hassle to make the festive food. But once a year, it’s the role of the spirits to exorcise evil for us, and to give their blessing to the New Year. It’s an event for us to give thanks. You know what, if you’re worried about the dirt, then it’s fine if they just come into your entrance hall. Nowadays, it’s no problem just to give them some snacks and sake from the convenience store or the supermarket. 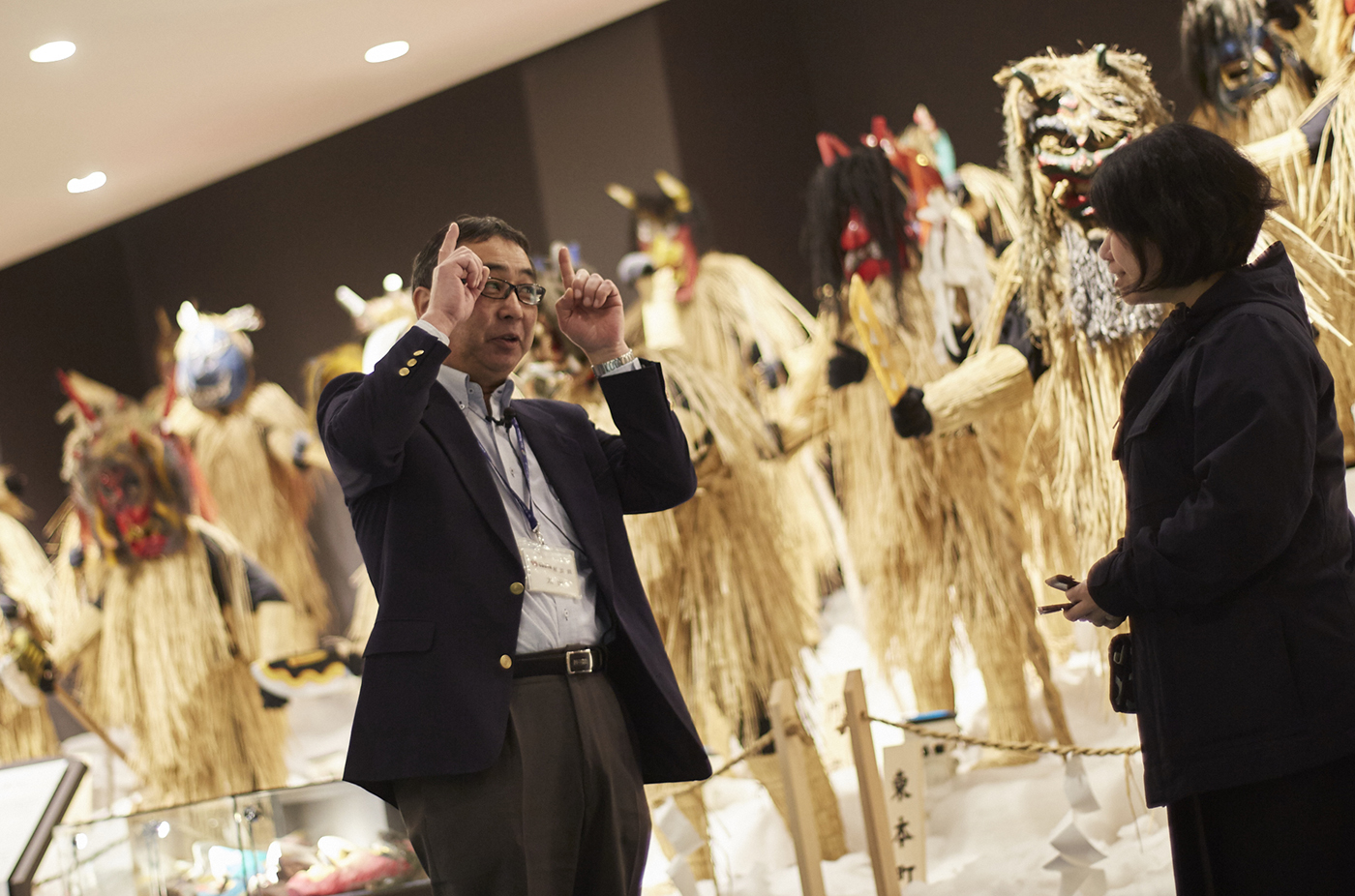 Yabuki
The key thing is just showing them a welcome, isn’t it?

Ota
That’s right. When they’re young, I guess people don’t want the ‘namahage’ coming round. But I find that as people get older, they warm to them and are much more receptive to a visit.

Yabuki
I suppose anyone would feel a bit apprehensive about something like this to begin with….

Ota
Yes. That’s right. But once we get to a certain age, we feel grateful for a visit and welcome the ‘namahage’ when they come with their scolding and harsh words. Also, the belief that there are spirits always present in the mountains has some religious sentiment and a sense of piety attached to it.

We’ve learned about the background to the ‘namahage’ at the Oga Shinzan Folklore Museum and the ‘Namahage’ Museum here today. Next time, we’ll speak to some of the actual participants in the ritual. 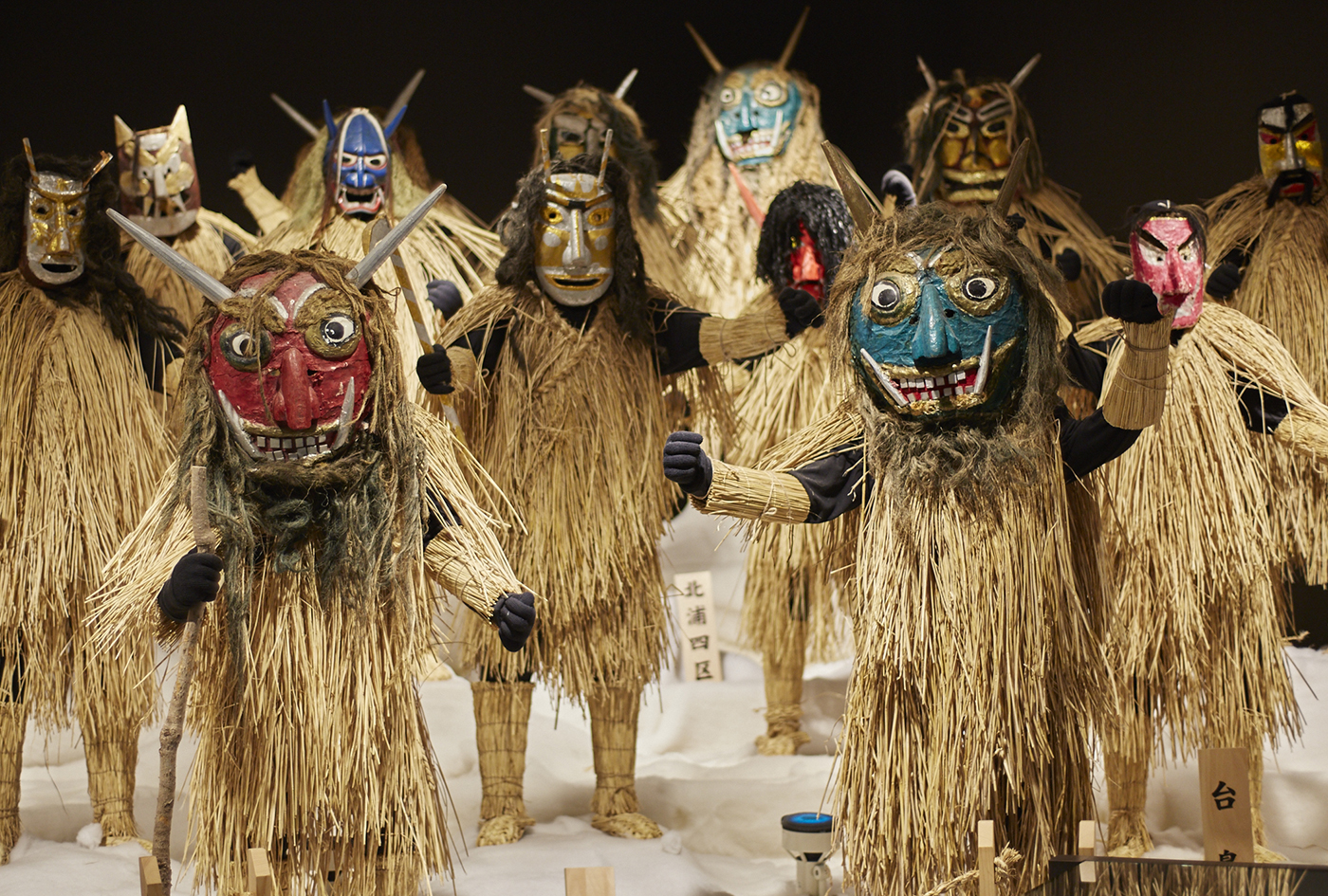