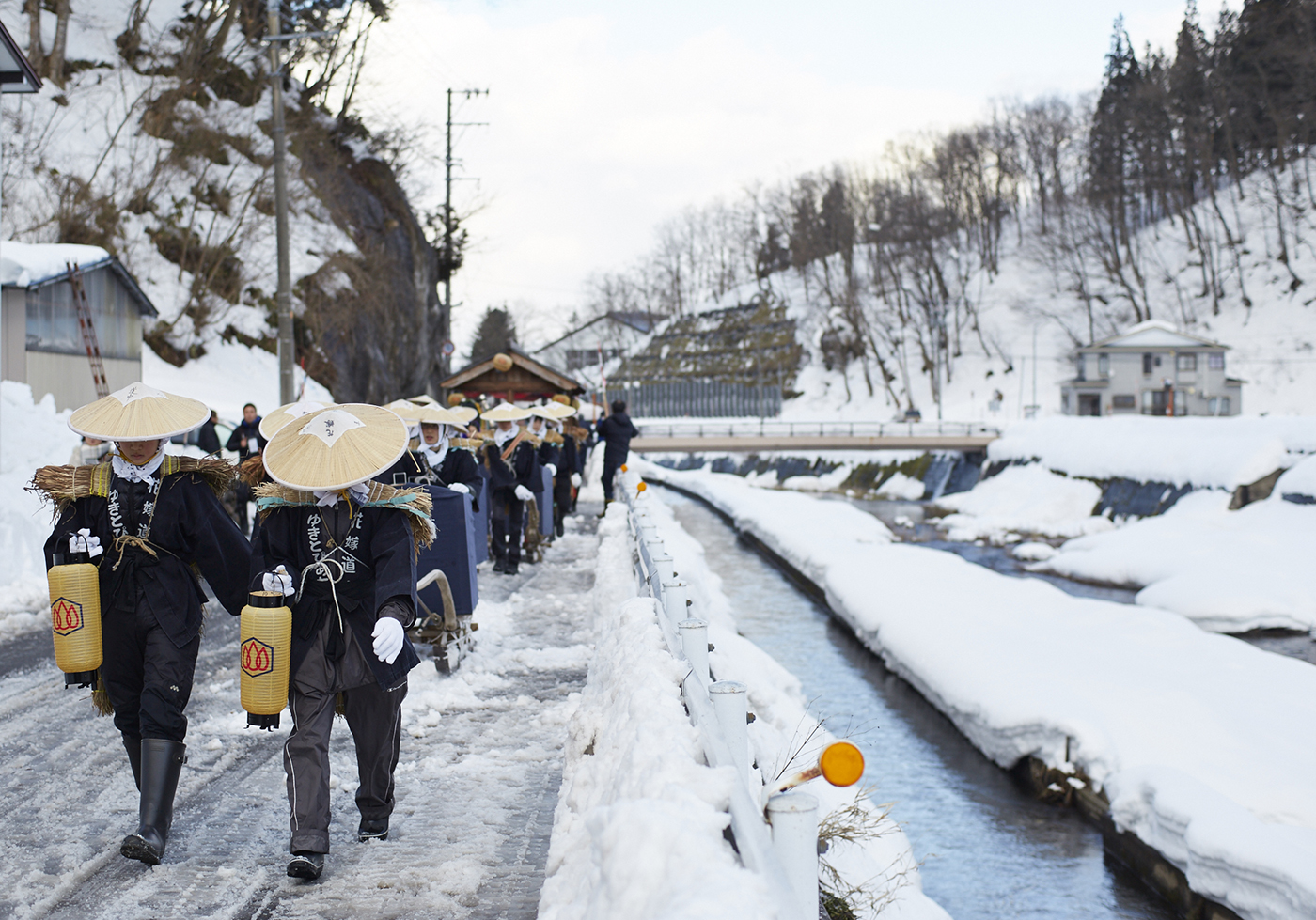 The Hanayome Dochu is an event which recreates a traditional wedding procession, with the bride and groom riding together in a horse-drawn sleigh. Today, we’re going to find out how this event first came about 32 years ago.

Editor; former designer. Born and raised in Akita, she is a hardocore Akita native! She is Deputy Chief Editor for the free magazine “non-biri”.

YABUKI
What kind of people took part in the ceremony when it first started?

SUGAWARA
That was the year we held the 30th anniversary event of the Ugo Beko Matsuri (Ugo Beef Festival). The main participants in that were local city office workers or young people from commerce, industry or farming. There were about 250 people taking part altogether.

SUGAWARA
The beef festival was held in the summer, but I wanted to do my event in the middle of winter. I used to love skiing as a kid, so I thought that since the Nanamagari Pass was closed to traffic in winter, it would be fun to have a ski race there. That’s how the Yukitopia Nanamagari came about. To start with, the Hanayome Dochu took place the evening before this. 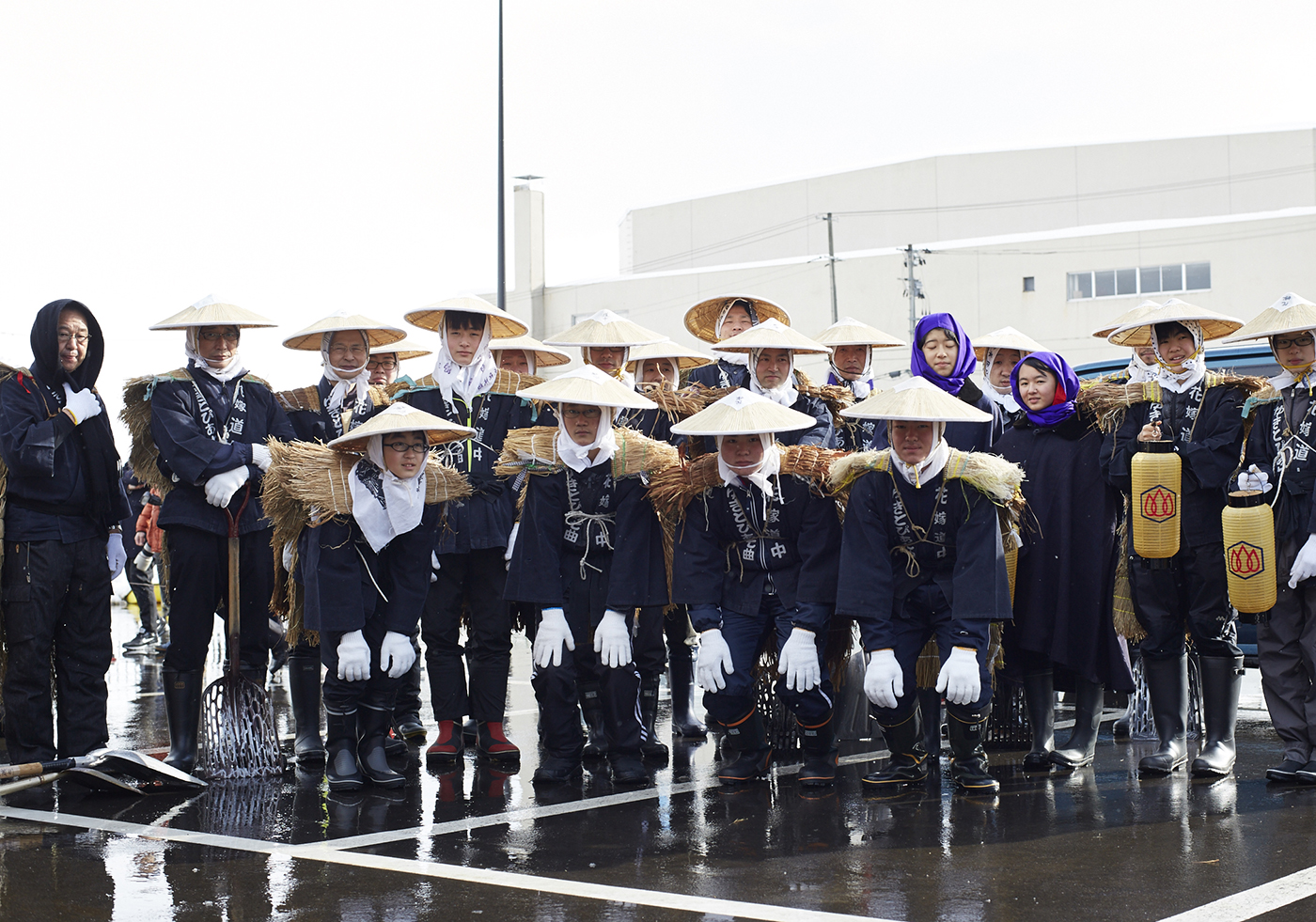 SUGAWARA
But now we’ve dropped the race and the main focus is on the Hanayome Dochu.

YABUKI
It must have been a lot of hard work to set this all up to start with!

SUGAWARA
No doubt about it! The procession goes on a community road , so it was a struggle to convince the public agencies and the local government about doing this, as well as the civil engineering department and the police.

SUGAWARA
Anyway, I went round pleading with people to let me do this. I had to do a lot of bowing! 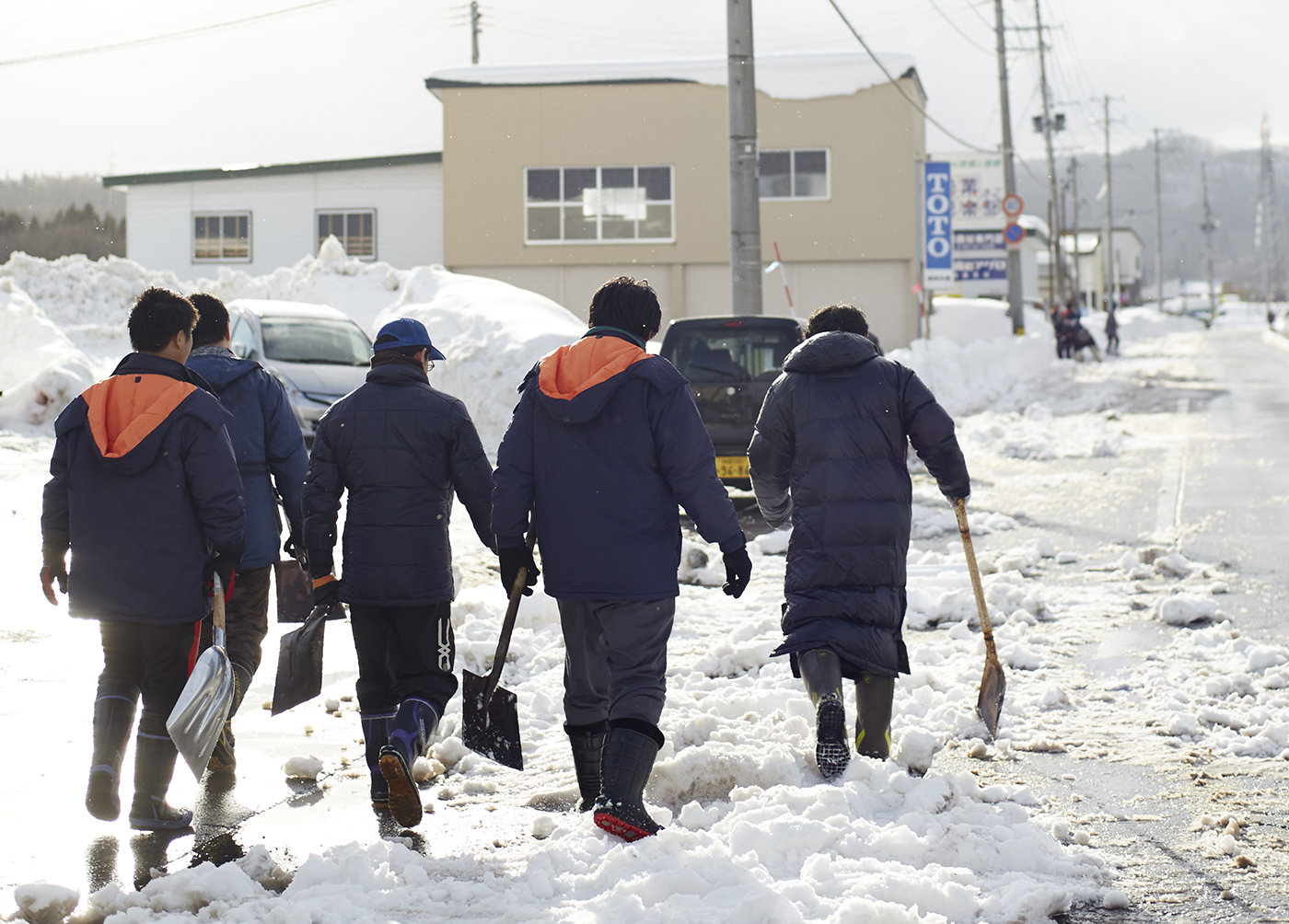 SUGAWARA
At the time, I was still quite young. I didn’t have much of a reputation or any status in the community. The older people said things like, “Great idea! I love it!” but the people whom I wanted to actually take part in the event said, “I’ve never heard anything like this! It’ll never work!” I had to talk to so many people to convince them. It was really tough.

YABUKI
I can see that the hardest people to convince would the participants themselves. I guess you needed to have them onside with what you were thinking to get them to help you.

SUGAWARA
To begin with when I told them about closing the Nanamagari Pass and walking 12 kilometers in 5 hours in a horse-drawn sleigh, they just said, “Ha! Dream on! You’ll never get this off the ground.”

YABUKI
They just didn’t get it, right?

SUGAWARA
I’d had this notion brewing in my mind for 10 years, so I took it all for granted. But thinking about the practicalities of the whole thing was another issue altogether.

YABUKI
I see what you mean.

SUGAWARA
The Ugomachi Commerce and industry Department really helped me out, but this was a completely new idea for them. Looking back, it seems like only yesterday, but this all happened 32 years ago… The first time we did it, there was a blizzard!

SUGAWARA
It was a total whiteout. We couldn’t see a thing. But it was still great. We were hooked up by walkie-talkie. When we got to the pass it was just a jumble of noise – the sounds of the snow storm, incoming voices on the radio and our heavy breathing all mixed together! When we reached the end where the ceremony was being held, we had around 1,000 people there waiting for us. It’s normally just completely deserted there! It really was an impressive sight.

SUGAWARA
Before we got there, we hadn’t realized there were so many people in the village! They all crowded round the sleigh which had just traveled 12km. The sweat was steaming off the horses. When I saw the bride and groom get down from sleigh I thought, “This is so wonderful. We should do this every year!”

SUGAWARA
Having walked 12km I was tired out as you’d expect, but it was a pleasant kind of tiredness. People around me were saying, “We’ll have to do this again next year” or “This is so moving. It’s wonderful.” I thought, “Even when I’m gone, someone else will carry on this event in future.” (A tear comes to his eye)

SUGAWARA
So you see that’s the origin of the saying, “If it snows, so much the better!” 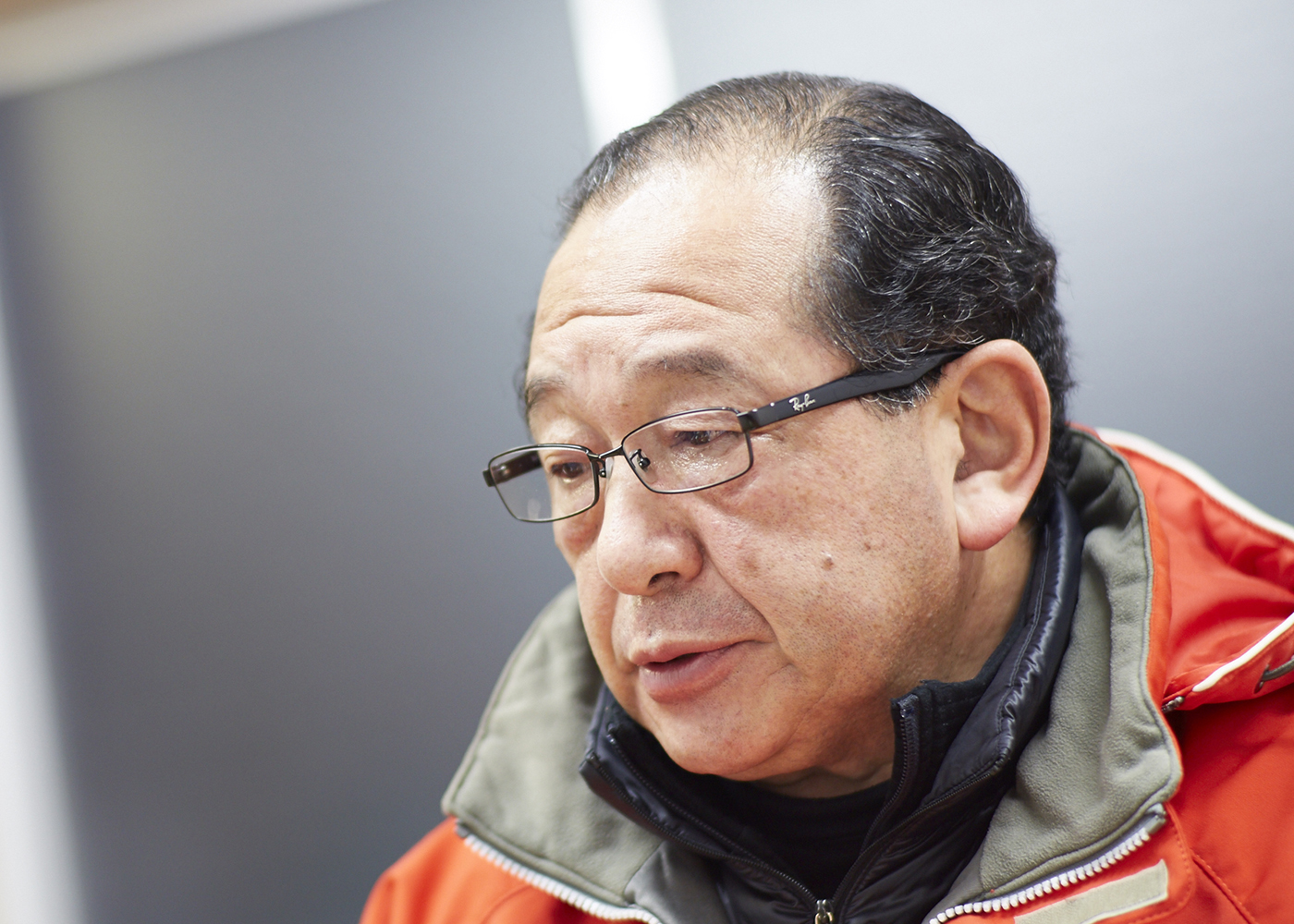 SUGAWARA
I actually think if it doesn’t snow then it’s a bit of a problem. If you can see the tarmac on the road, or it’s raining, then the sleigh doesn’t move, it’s harder to walk, and the atmosphere isn’t as good.

YABUKI
“If it snows, so much the better!” right?

SUGAWARA
It doesn’t matter how stormy it is – having snow is actually exactly what we need for this event.

YABUKI
Well, that’s a different way of looking at it!

SUGAWARA
This is what suits the natural environment of the Tashiro area and Nanamagari…Oh no, I’m welling up again! The Nanamagari Pass has around 49 bends in it. If the national highway was just a straight road, this event wouldn’t really work. This is the only place we can do it.

YABUKI
Right.So whether it snows or not makes a huge difference, doesn’t it?

SUGAWARA
That’s why we need to do so much preparation on the day itself.

YABUKI
I see. I guess even if everything is nicely prepared in advance, it can all end up being buried by the snow…

SUGAWARA
Exactly right! The climax of the event is from dusk onwards so we’re doing all the preparations in the snow from the morning on the day itself – digging holes in the road for the candles, for example.

YABUKI
So much to do! In total you’re preparing for a whole day or two? 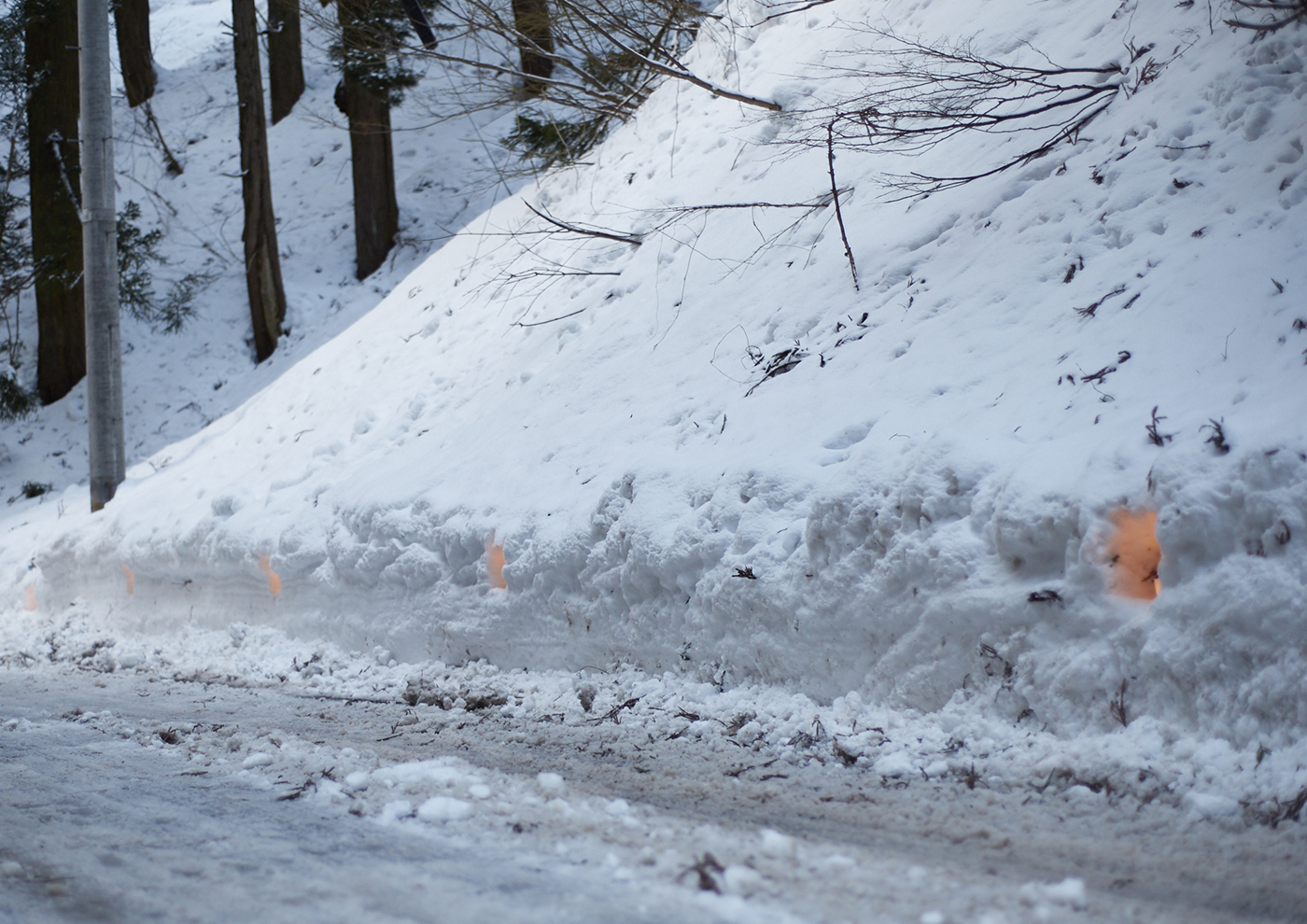 YABUKI
So it’s a bit of a problem in years when it doesn’t snow much?

SUGAWARA
When that happens we have to spread the snow out. Snow that has been cleared away is piled up on both sides of the road, so we need to break this snow up either by hand or with machines so we can spread it out on the road. The people of the town take the initiative and get together to help out.

YABUKI
Amazing! If you’re all doing this together, I guess it’s a moving experience for everyone, but it must be a really enjoyable feeling as well. 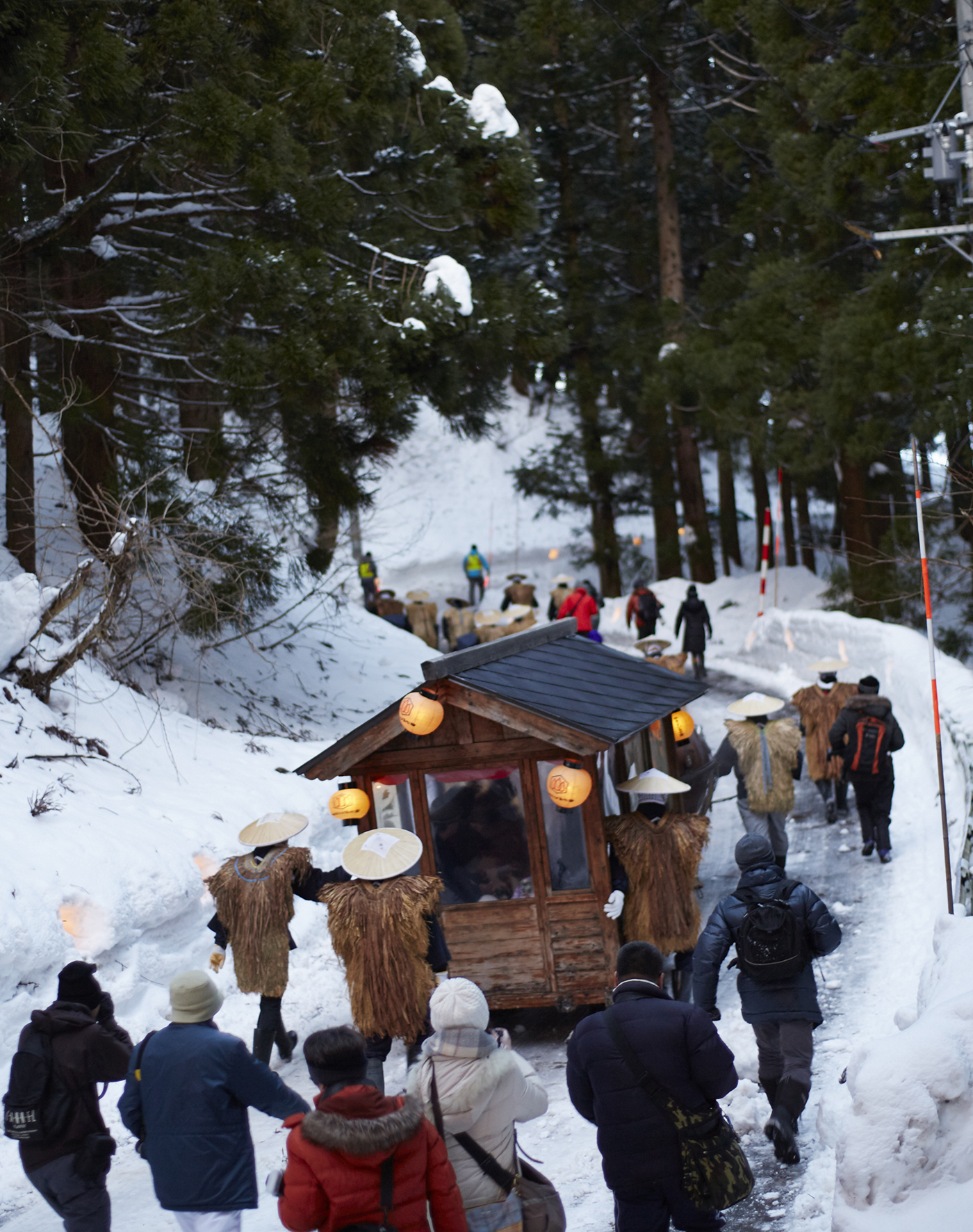 SUGAWARA
Last year, at the opening ceremony of the Kamaitachi Museum of Art in Ugomachi, the Director of the Regional Promotion Bureau was kind enough to say in his address, “I’ve seen many different events in Tohoku, but nothing as impressive as the Hanayome Dochu!” That was a surprise. I was in tears about that. 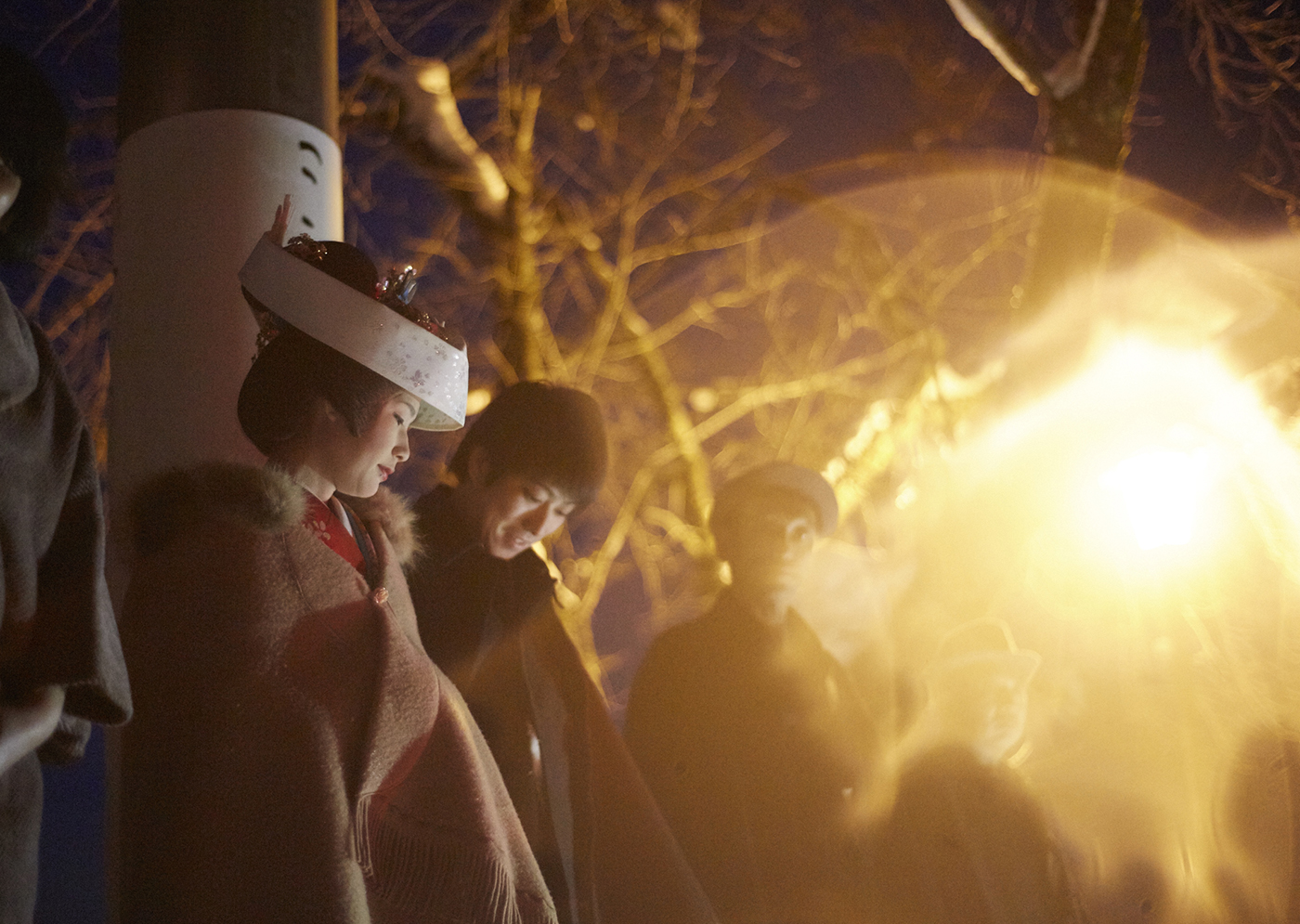 From the first time it was held up until now, the Hanayome Dochu has always been a communal effort on the part of the whole town. Next, we’re going to talk about “Snow” which is the focal point of this event and the relationship that people who live here have with the snow.