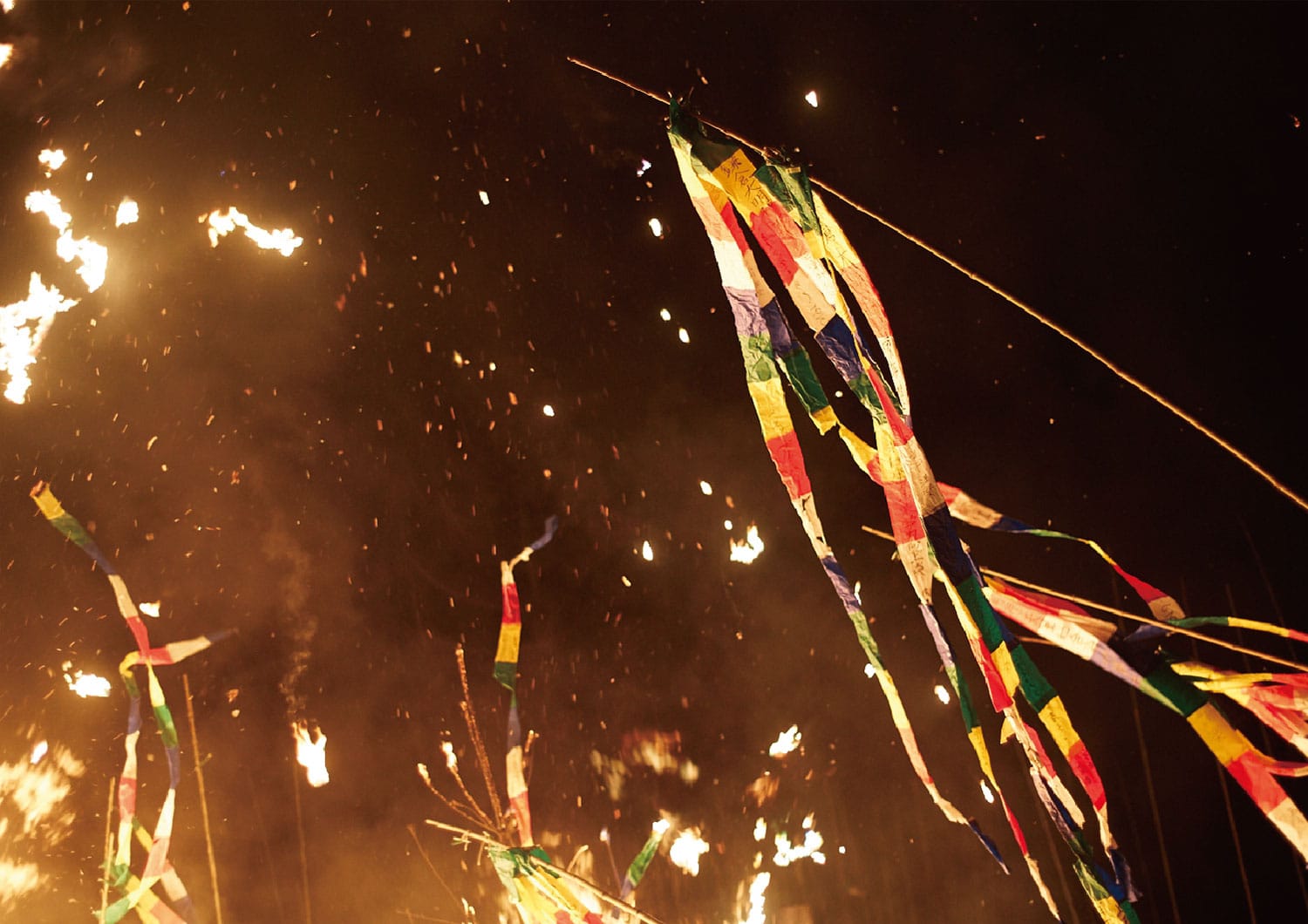 February 15th Here we are in Rokugo, Misato. Today is the last day of the Rokugo Kamakura. The Rokugo Kamakura is a koshogatsu event dating back over 700 years. It is a festival to pray for a good harvest and it’s been designated as a “National Important Intangible Folk Cultural Property.”

The festival starts on February 11th. People write their wishes for the year ahead on long multi-colored strips of paper (green, yellow, red, white, blue) and hang them as decorations from green bamboo sticks. These pennants are known as tenpitsu kaki. Local neighborhoods build torioi-goya (literally “small houses to drive away birds”) with thatched roofs and dedicate these to the kamakura daimyojin (“the great kamakura deity”). 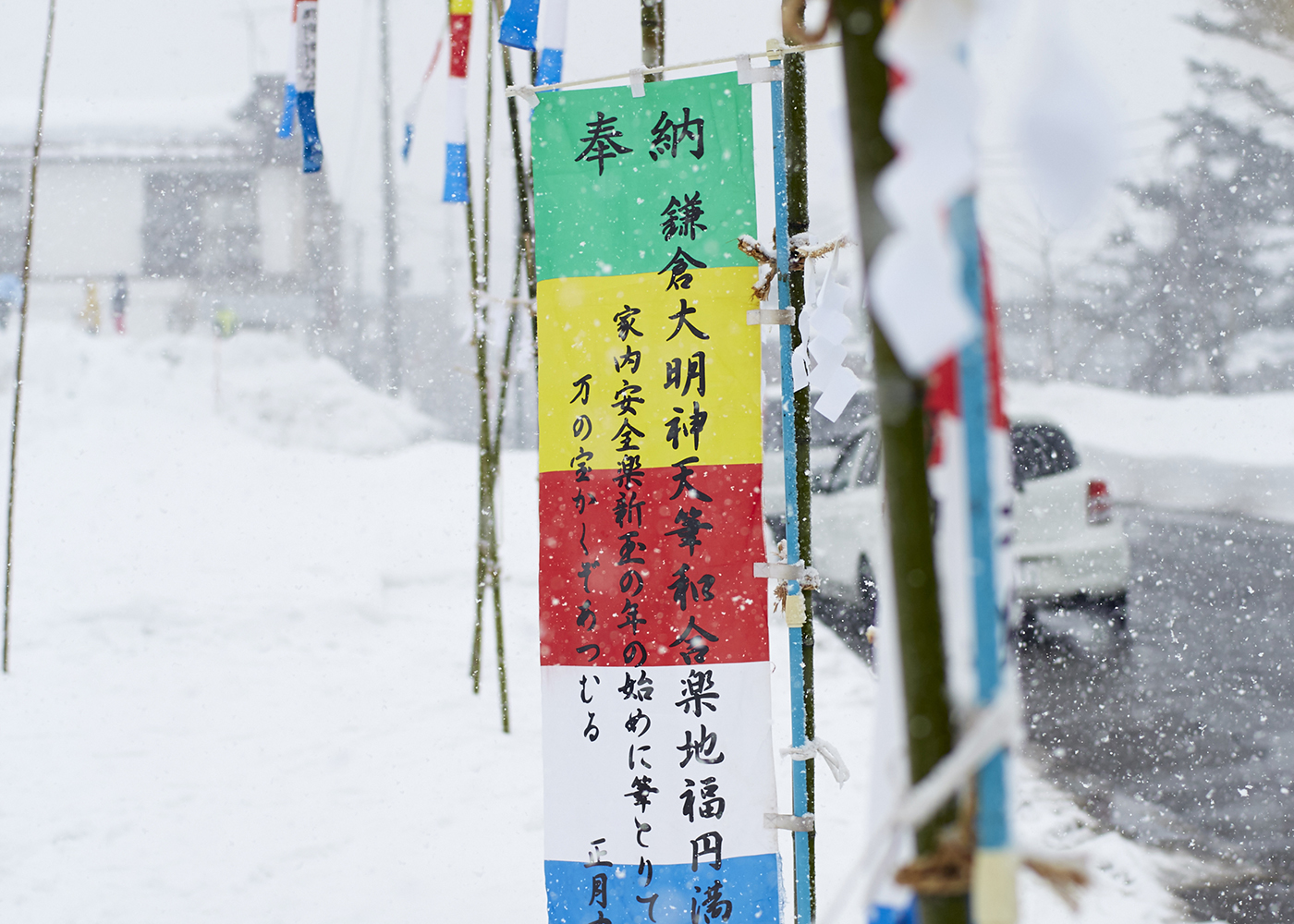 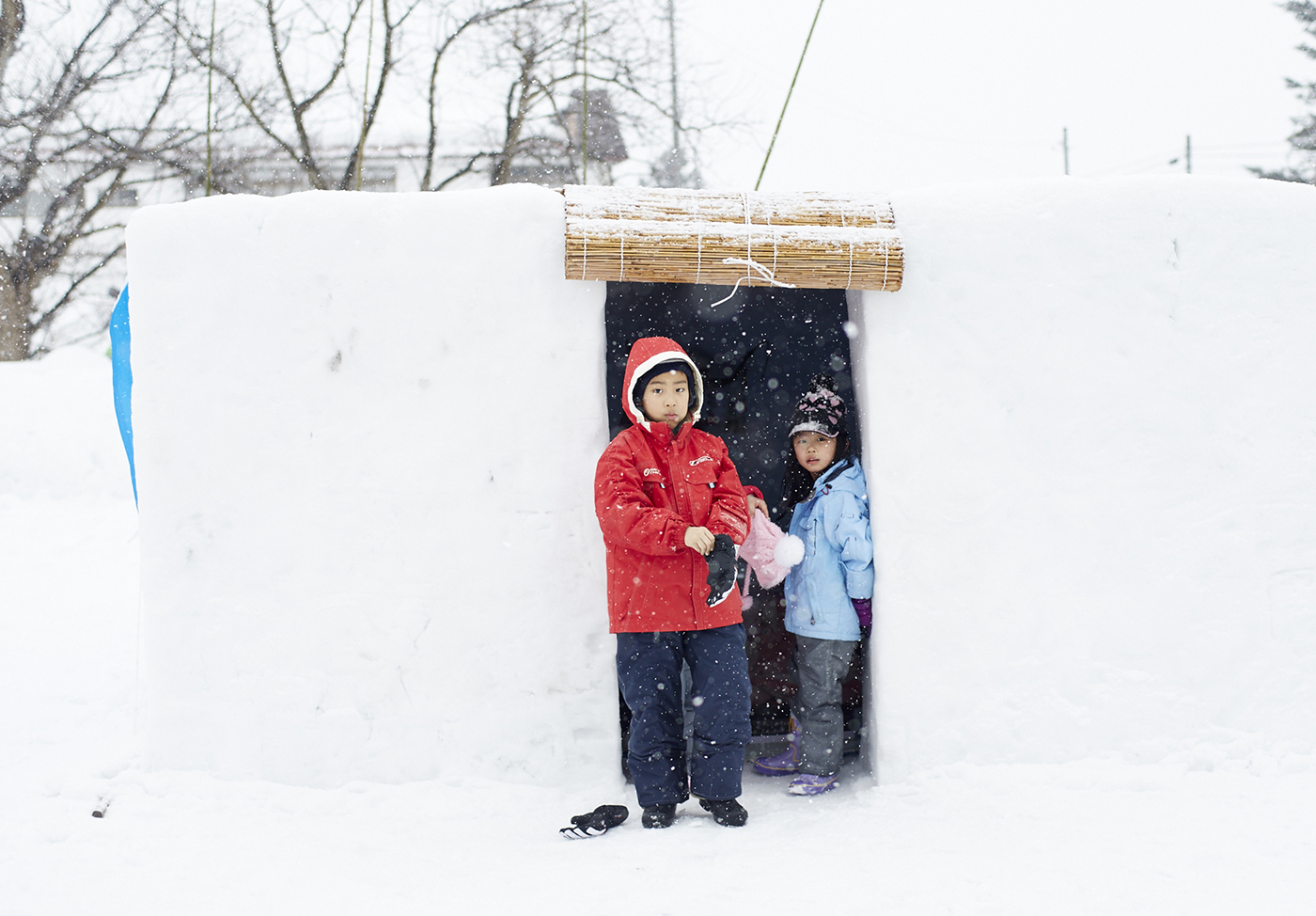 Anyone can write these tenpitsu, locals and tourists alike. Whatever country you’re from, someone can help you write your message on a tenpitsu pennant. The decorations add a splash of color to the town all shrouded in white. 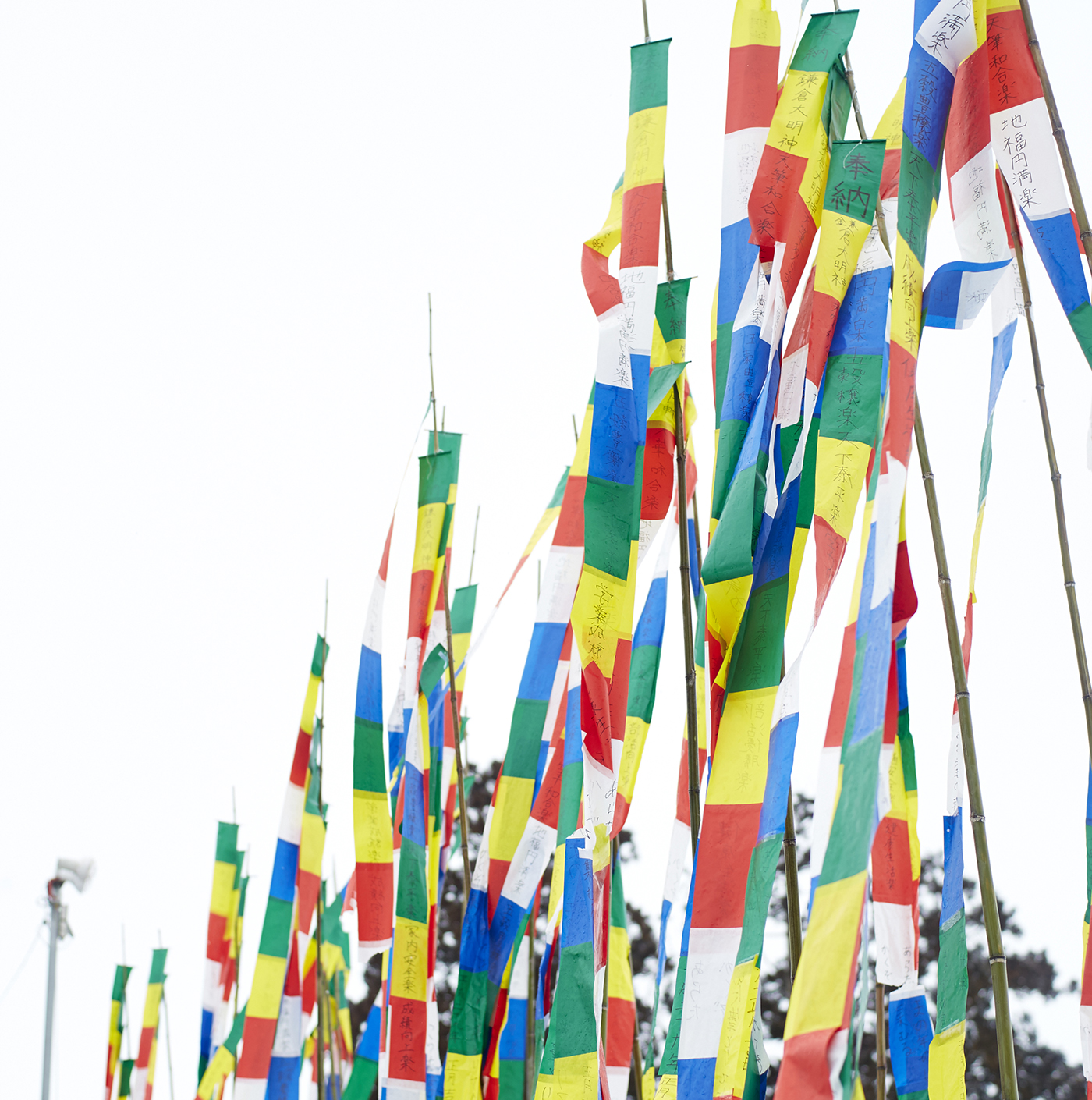 The climax of the event, the Tenpitsu-yaki (“Burning of the tenpitsu”) and Takeuchi (“Bamboo hitting”) takes place on the field in front of Suwa-jinja on the night of the 15th.At the Tenpitsu-yaki, all the tenpitsu from the neighborhood are gathered up and burned on the dondo-yaki, a bonfire made from decorations used for the New Year celebrations, such as shimekazari (traditional straw ropes).For the Takeuchi, the town is divided into two teams, North and South. The two teams brandish 6m long bamboo sticks and use these to fight each other. The tradition is that if the North wins, there will be a bumper harvest that year, and if the South wins, the price of rice will rise.These events, lasting from February 11th to 15th, make up the Rokugo Kamakura. 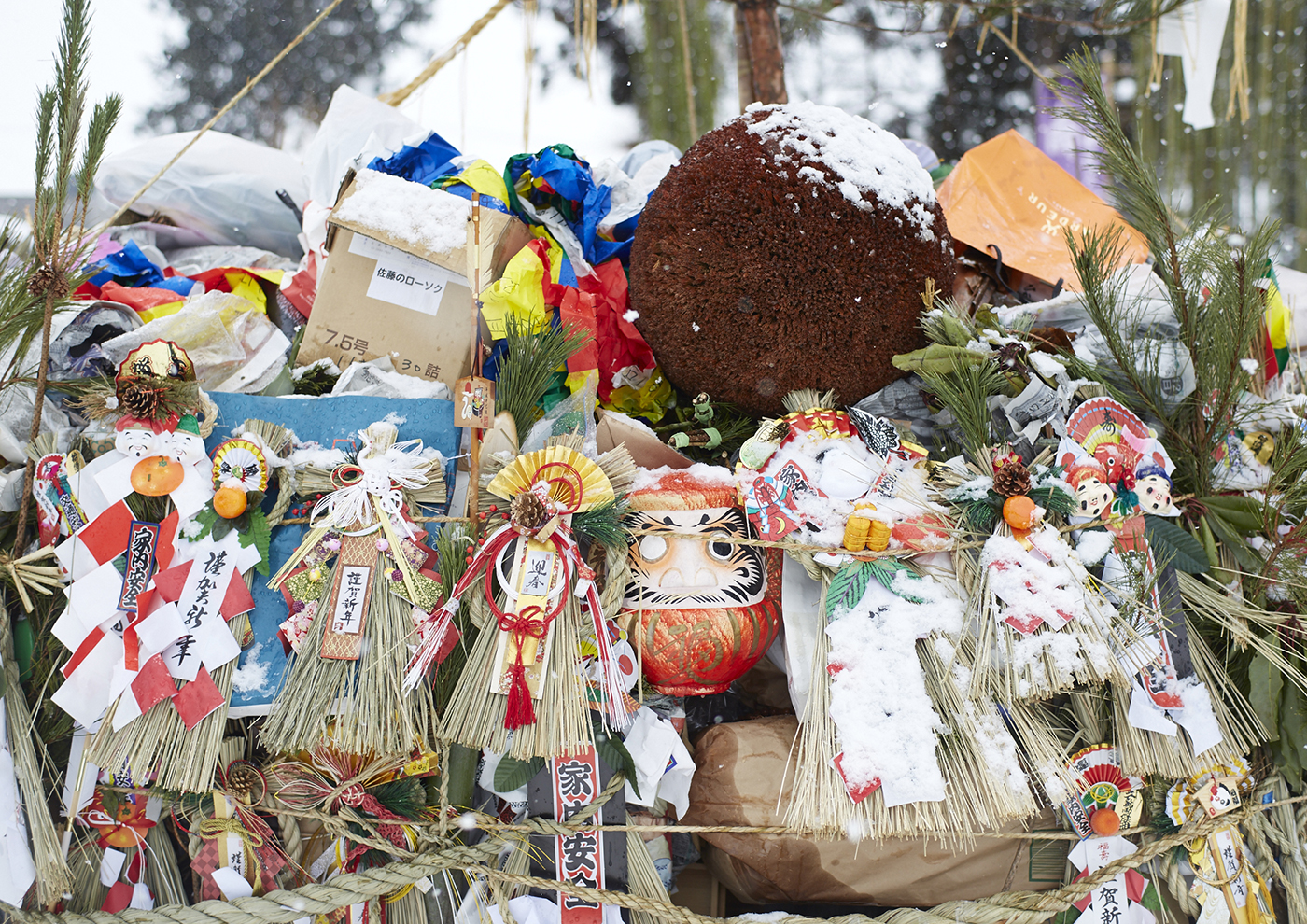 7:00 PM The Tenpitsu-yaki and Takeuchi are about to start. I go to see one of the groups from the North army, Asahi-machi, and the men are just getting ready to march out together. 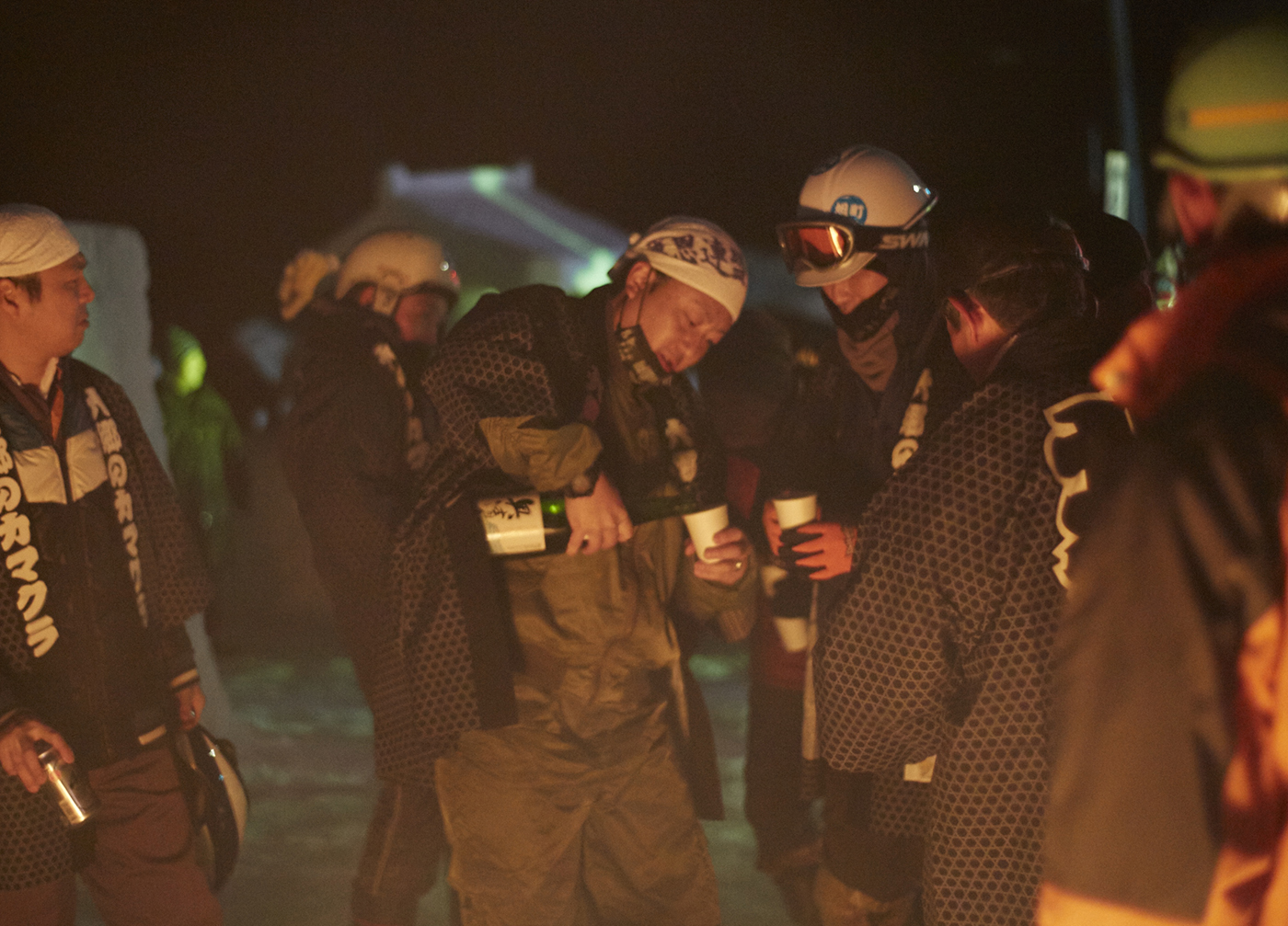 YABUKI
Look at all the helmets! You look like divers! You’re well covered up! Is it all your own kit?

Man
Yes. It’s all my stuff!

YABUKI
Do you do this every year?

Man
Nope. Actually, this year is my first time. I’m from Osaka, but I work here in Akita.

YABUKI
I see! How are you finding it? Doing Takeuchi for the first time, I mean! 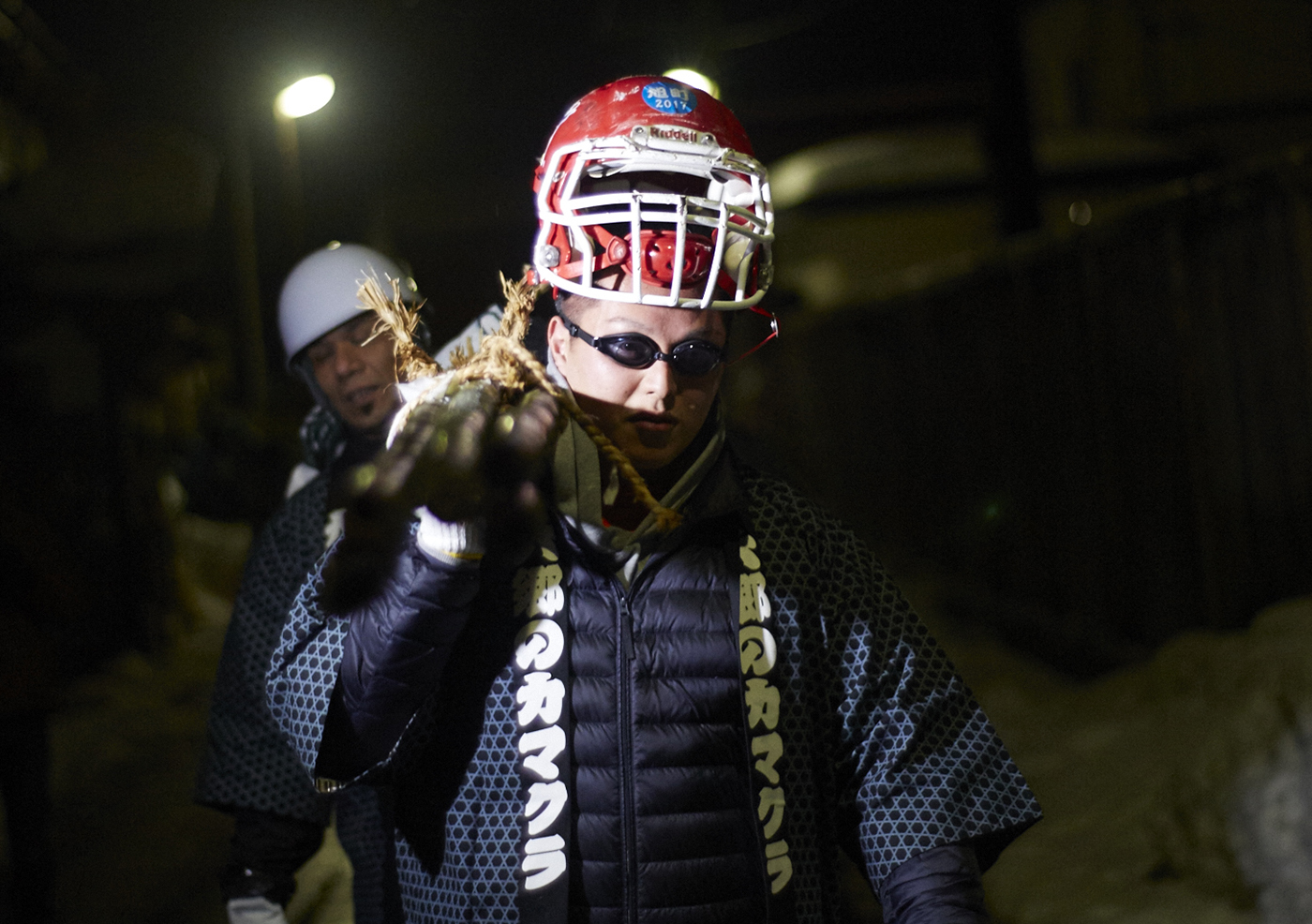 Man
…But this is wild. If you put a foot wrong, you can get hurt, but I love it!

YABUKI
I think it sounds fun!

Man
If you’re not careful, you can get knocked down as soon as the battle starts.

YABUKI
Ha ha! You’re off in a moment, I think! 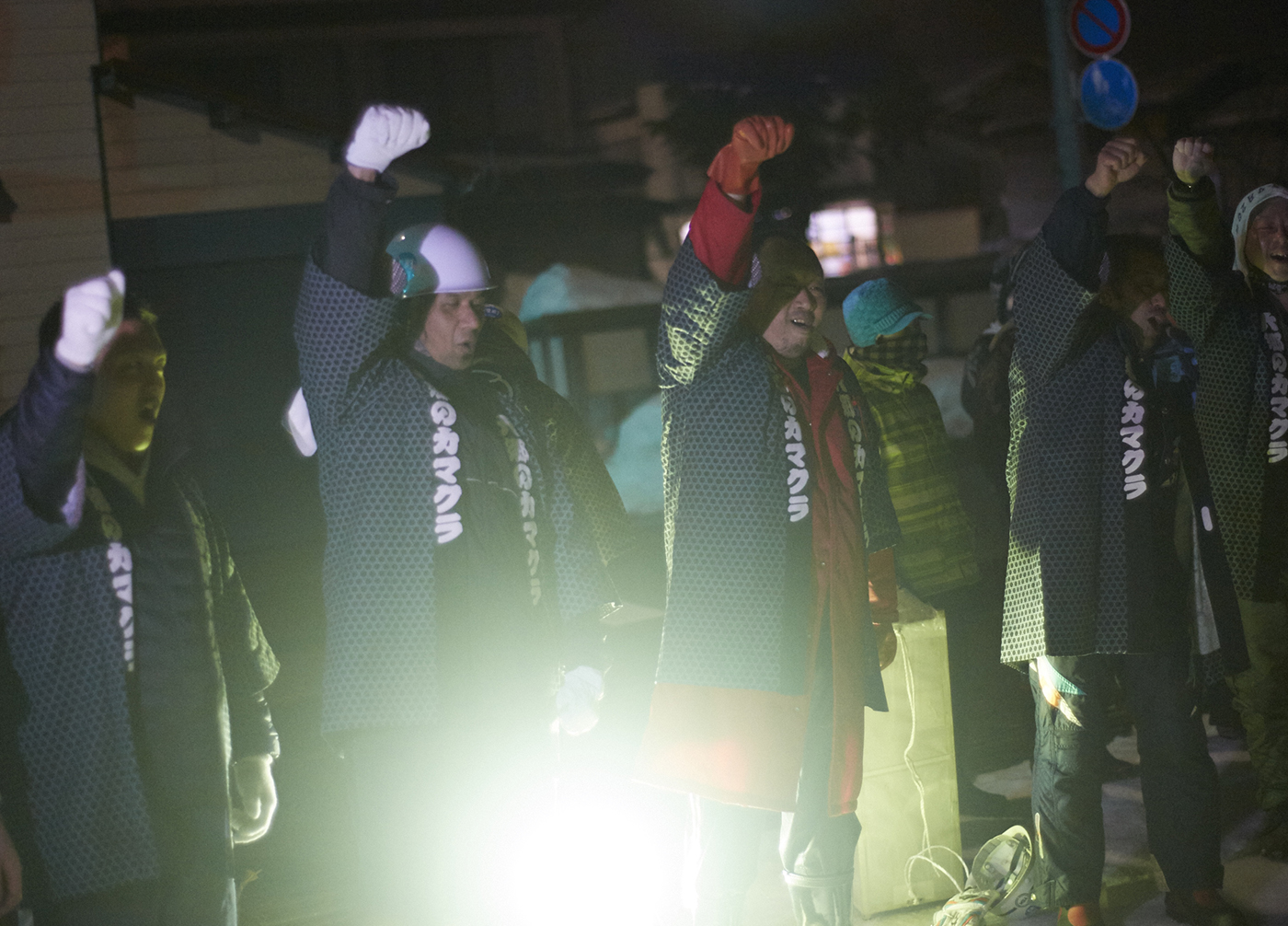 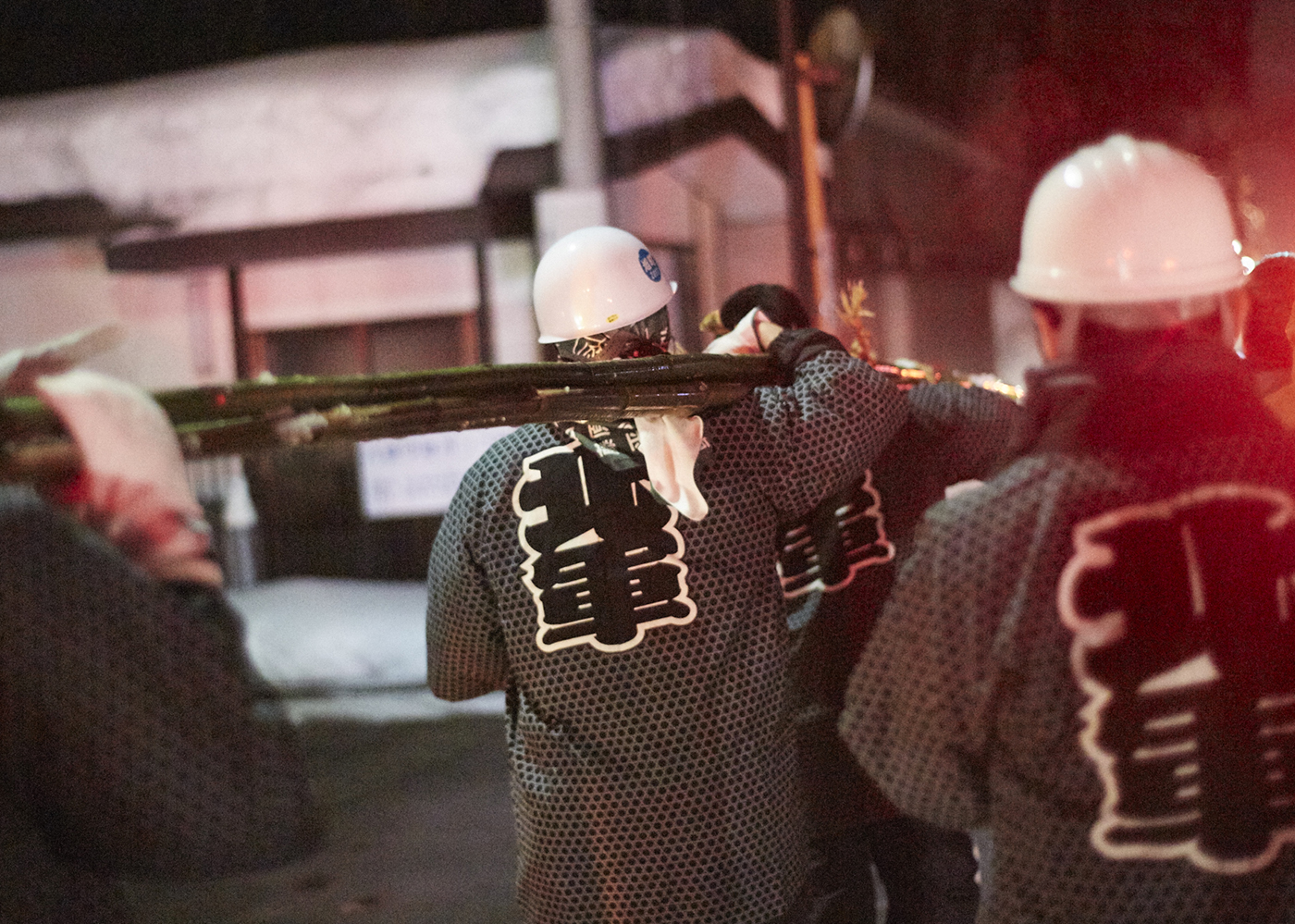 The men move off, carrying their long bamboo sticks to the battlefield. I chat with some of them along the way. This is Koji Arata-san.

YABUKI
Any butterflies ahead of the battle?

YABUKI
It gets your adrenalin going for the contest, I guess?

ARATA
You bet. From on our way to the venue!

ARATA
My heart’s in my mouth!

YABUKI
You only do this once a year, right! This is the first time I’ve seen this but I’m feeling pretty nervous already! Arata-san, how many times have you done this?

ARATA
Well…this is my fortieth or fiftieth time! 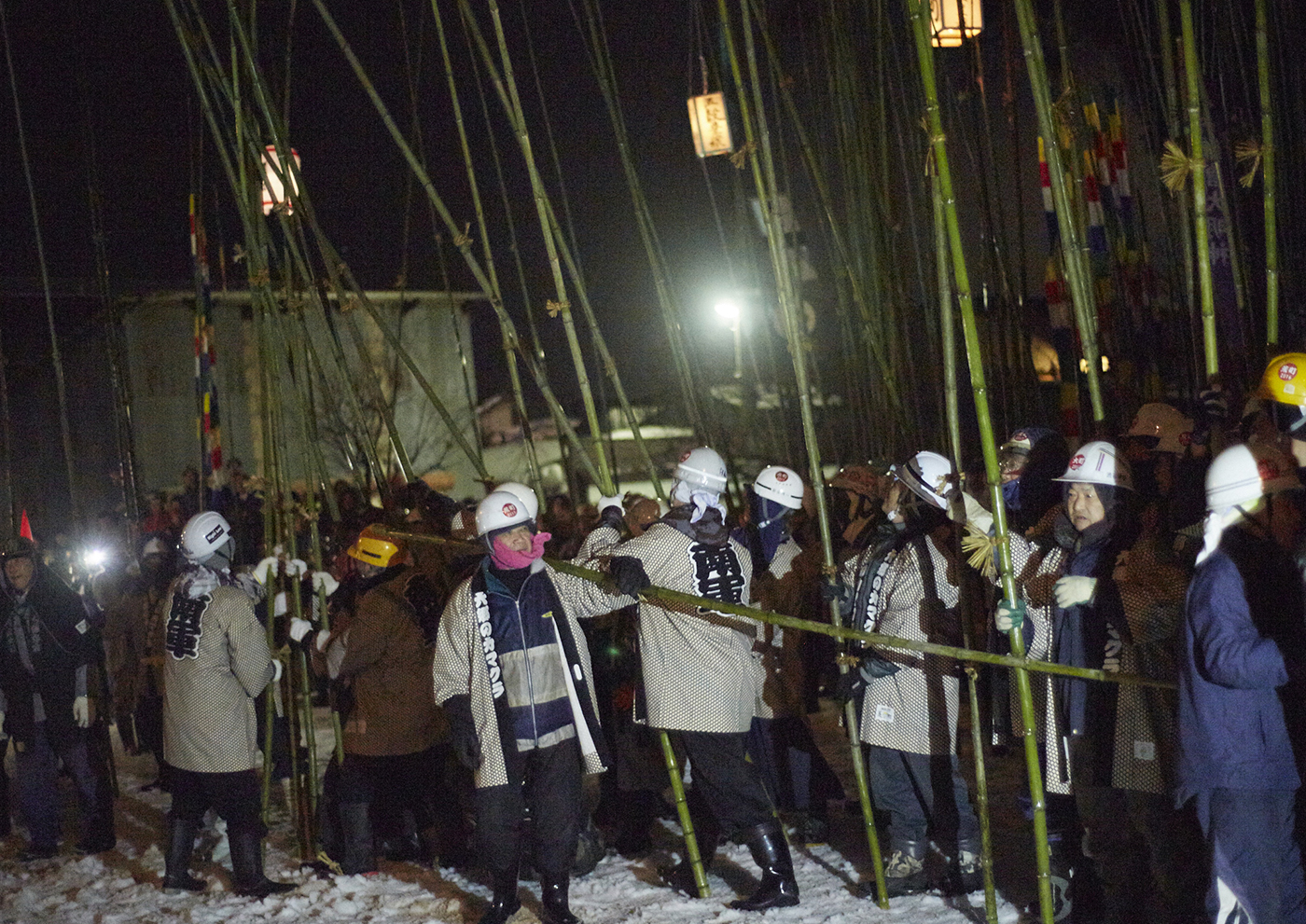 YABUKI
So you’ve done this ever since you were young?

ARATA
Yeah. For me the year doesn’t actually start until I do this. Nowadays I usually bring the bamboo sticks by car, but in the old days I used to carry them here on my shoulder. I had more sticks then than I do now. I decide out where we’re going to line up and put the sticks down there. I’m like a bamboo sentry.

YABUKI
A sentry? You’re like a lookout for the bamboo, you mean?

ARATA
That’s right. When the fighting starts, you have to make sure that someone from the other side doesn’t nick your bamboo.

YABUKI
Ah, I see! Do you think you’re going to win again this year?

YABUKI
How do they decide who the winner is?

ARATA
The side that’s pushed back loses. There are three rounds in total, and the winner is the side who wins the best of three. 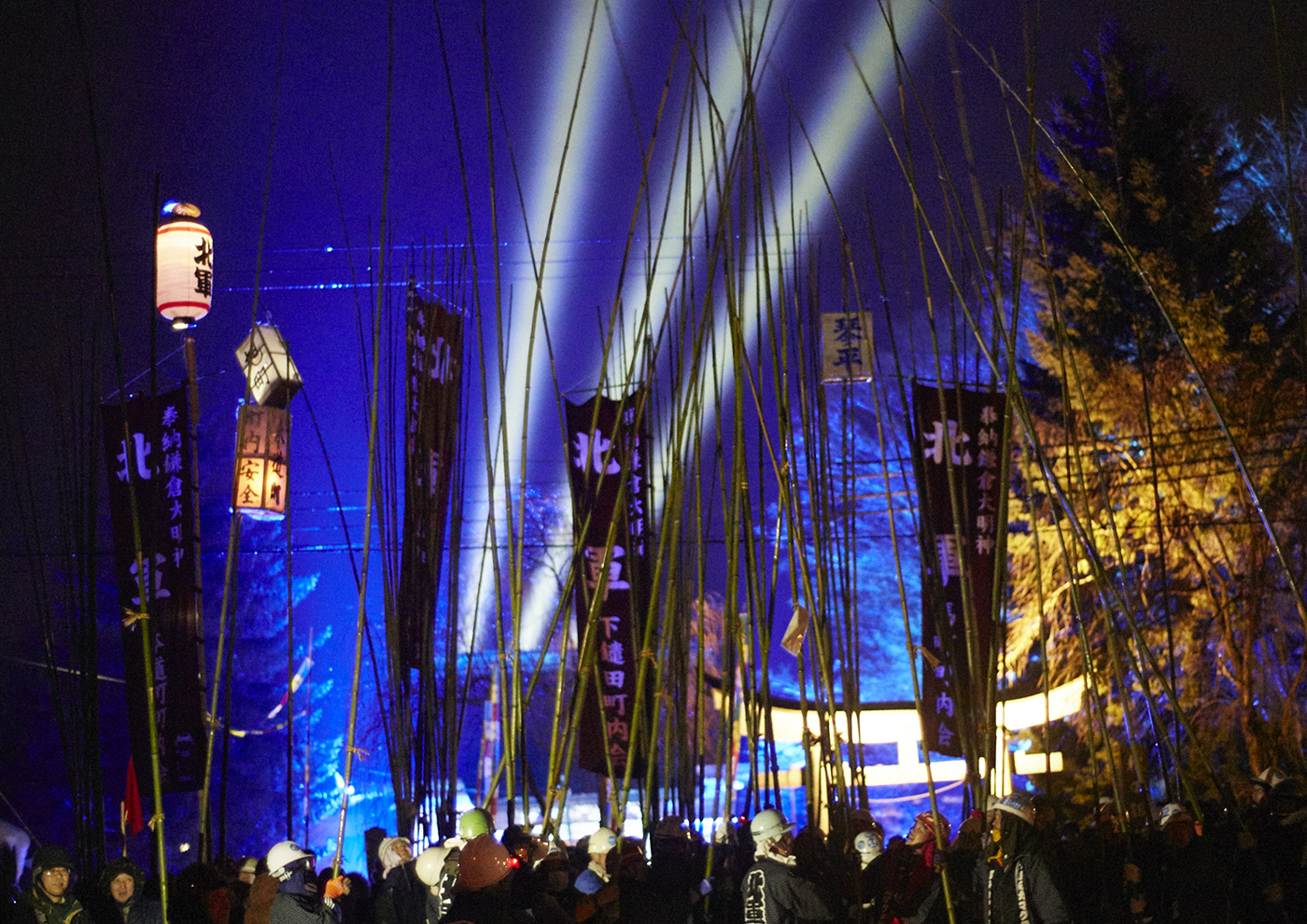 YABUKI
The North has won in recent years, right? Any particular reason for that?

ARATA
I guess it’s do with sheer weight of numbers and having the bigger army! I used not to wear a helmet, but I kept being hit on the head!

YABUKI
What! That must have hurt!

ARATA
Yeah. I got clattered.

YABUKI
But I suppose that’s like a medal for your efforts, right?

YABUKI
And your win brought good fortune I suppose…

ARATA
That’s right. But I got bumped on the head and I was still aching a month later. We’re not that stupid anymore. We make sure we’re well protected.

YABUKI
I guess you don’t think about the pain in the heat of the moment! (We approach the venue). We’re about to start!

ARATA
Yep. It’s about to start. I’m not sure there are enough people this year…

ARATA
No! There are definitely less than there used to be! In the past, we used to get thousands turning up. 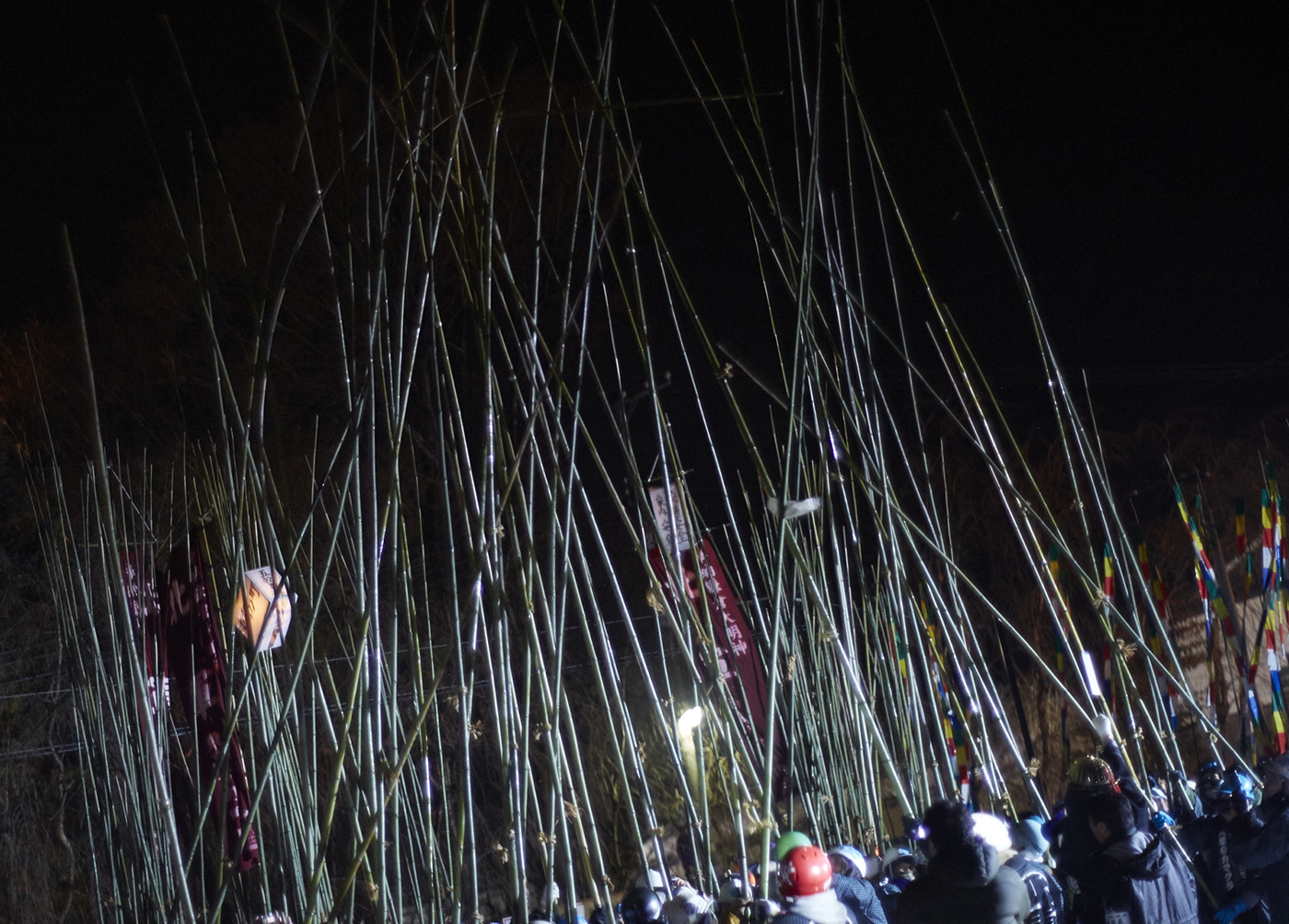 Once we arrive at the venue, there’s a big fireworks display and the Takeuchi begins. 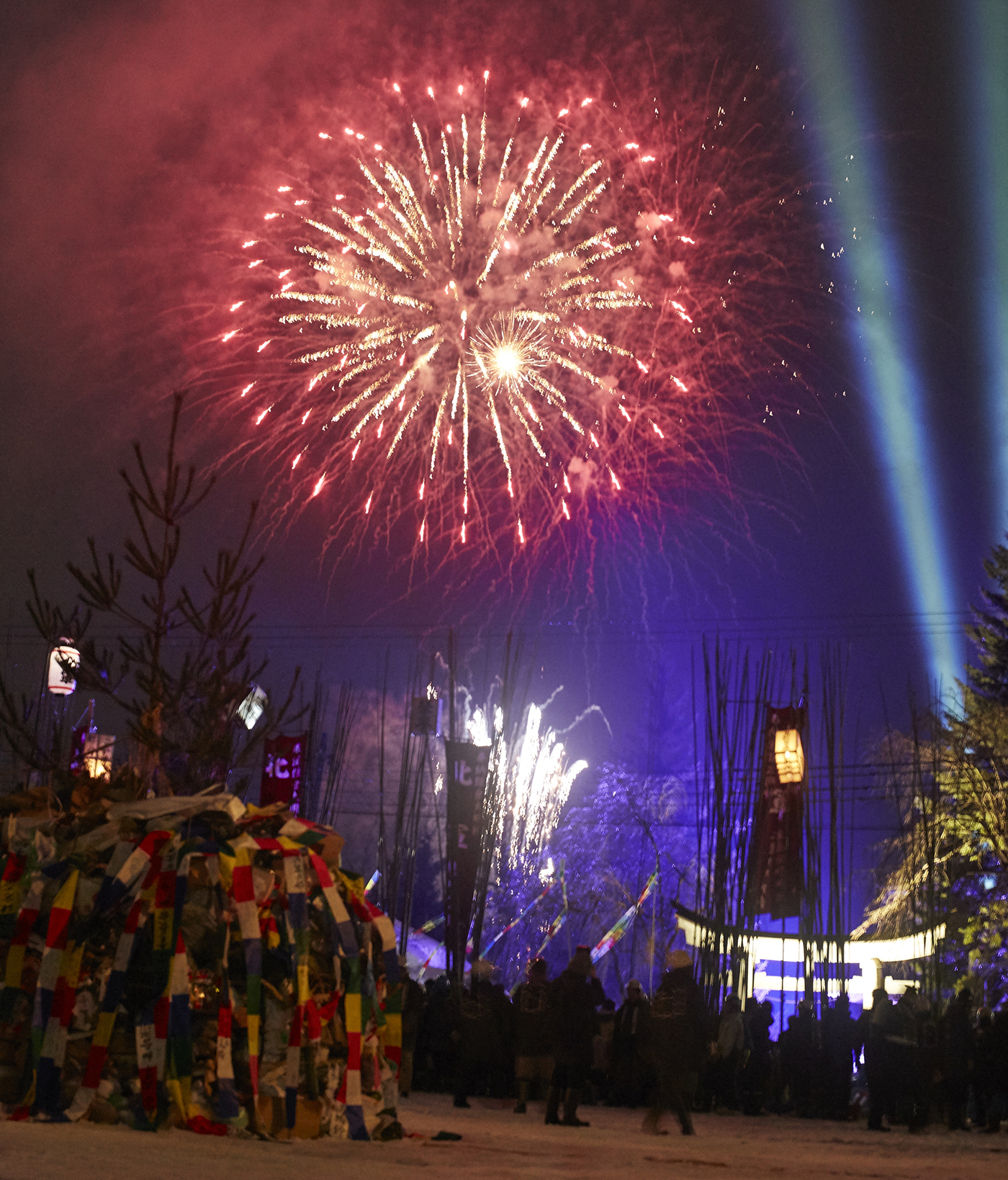 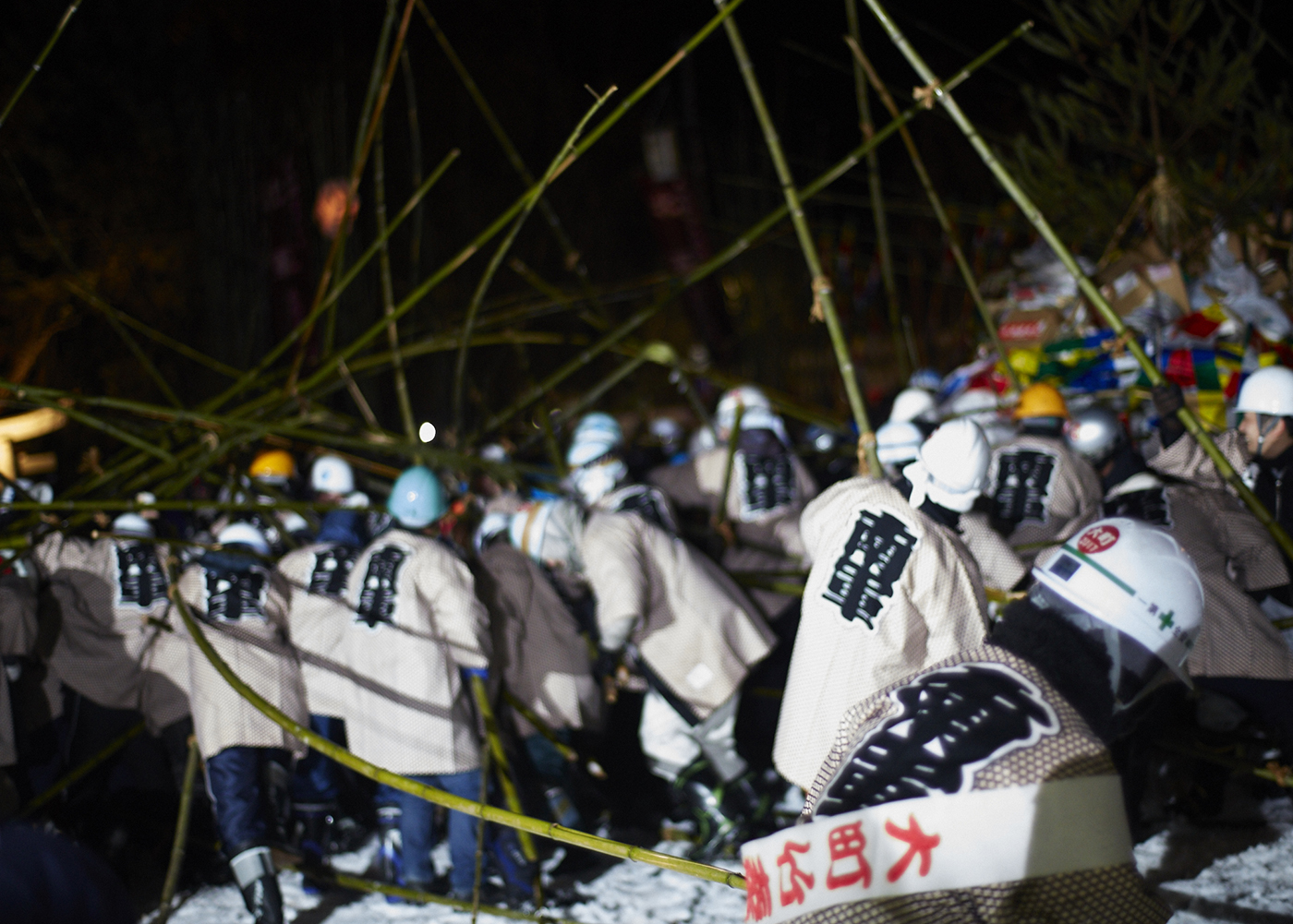 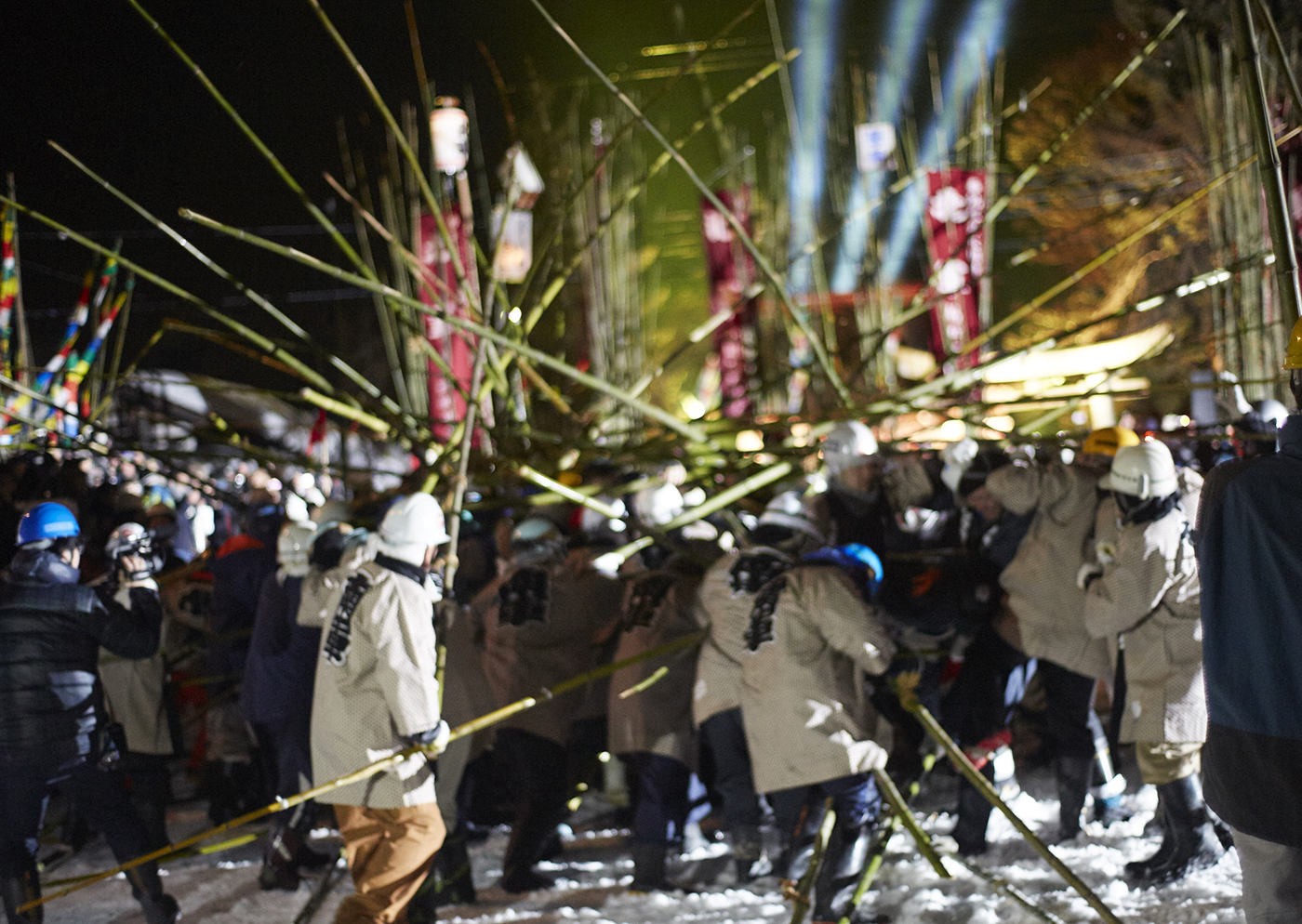 After the second round, the Tenpitsu-yaki starts up in the middle of the field. The place is ablaze with color, with flames and the multi-colored pennants. They say that the higher the flames flare up, the more likely it is that the wishes written on the tenpitsu will come true. The third round starts while the flames are still flickering strongly. 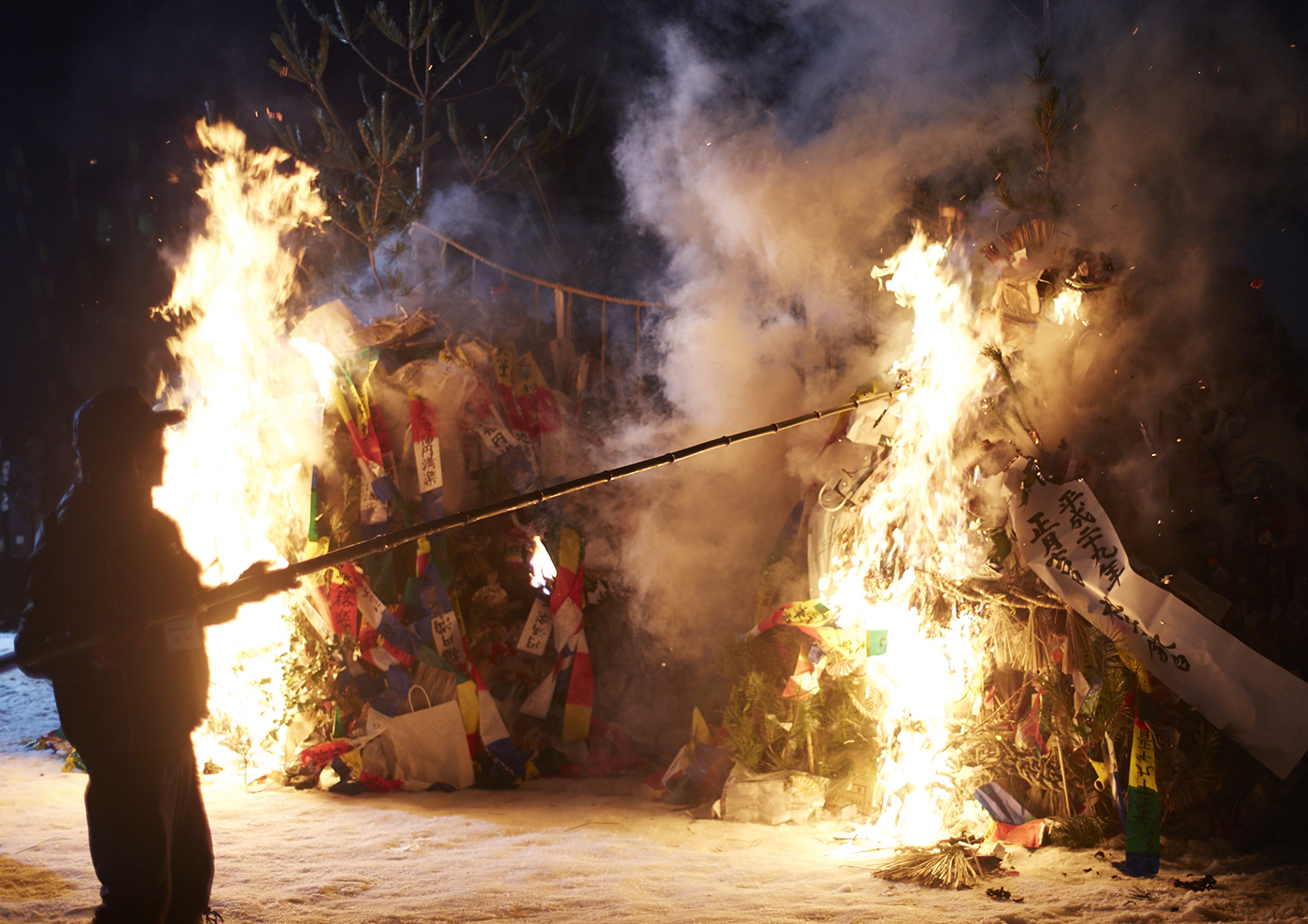 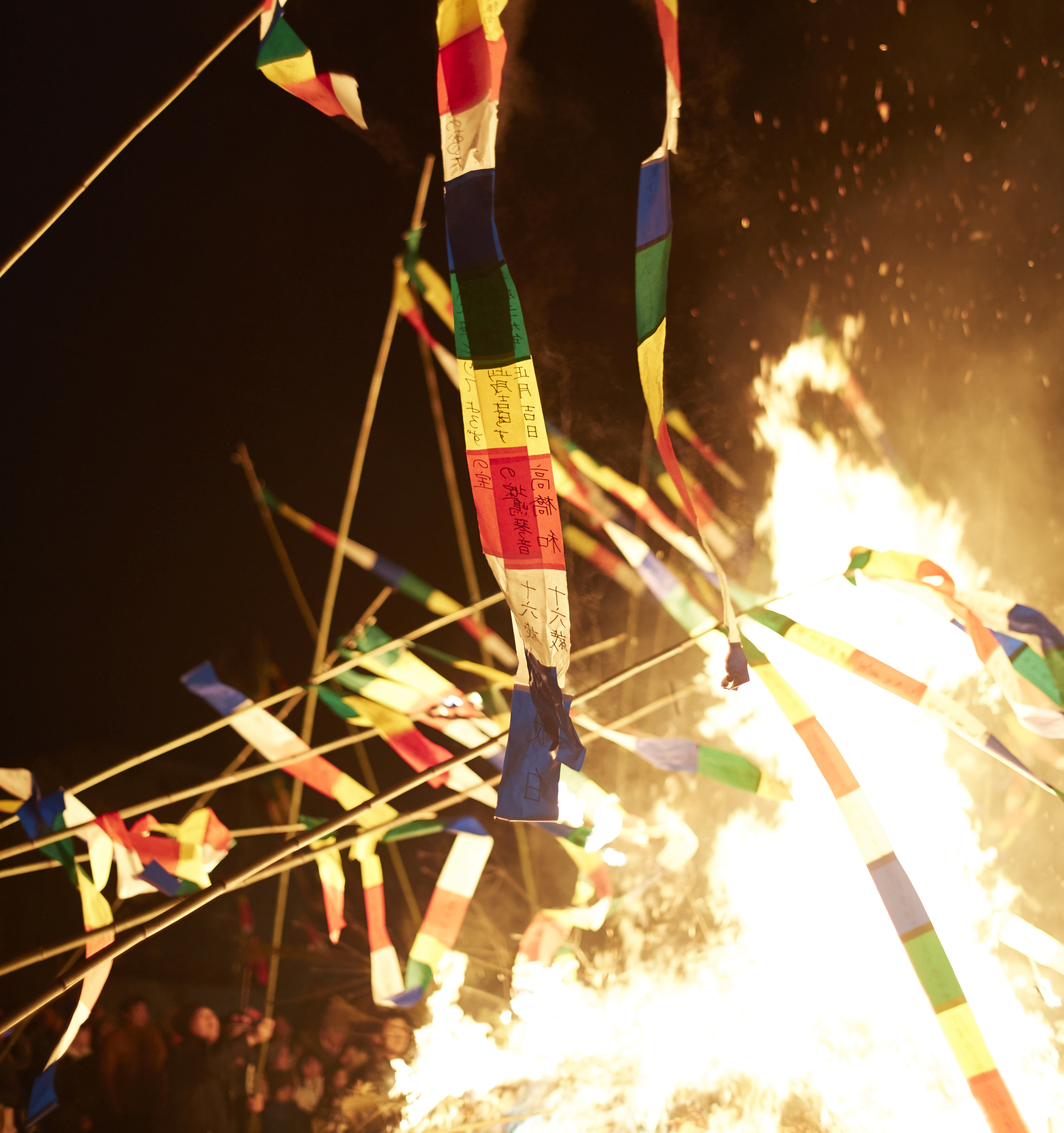 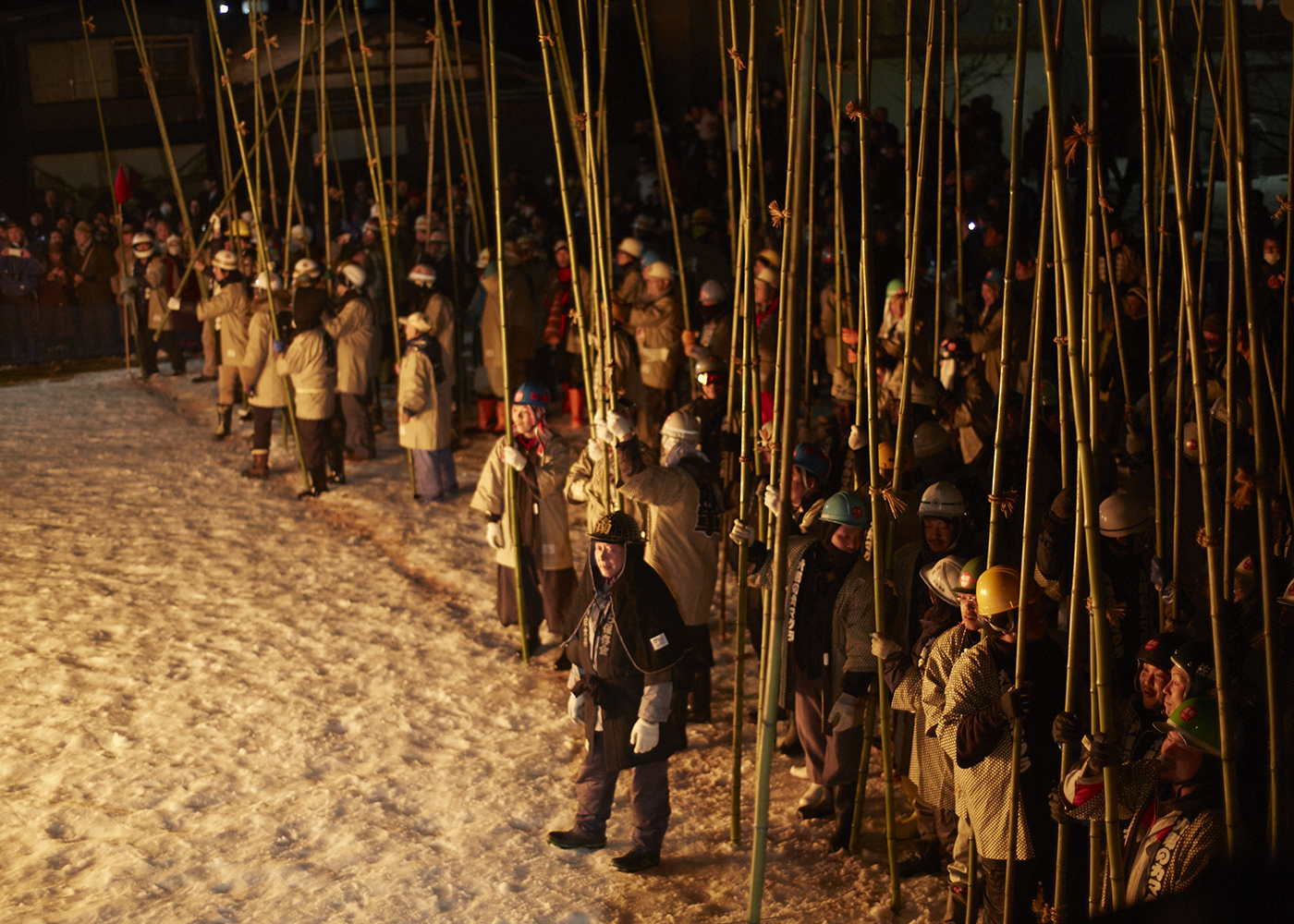 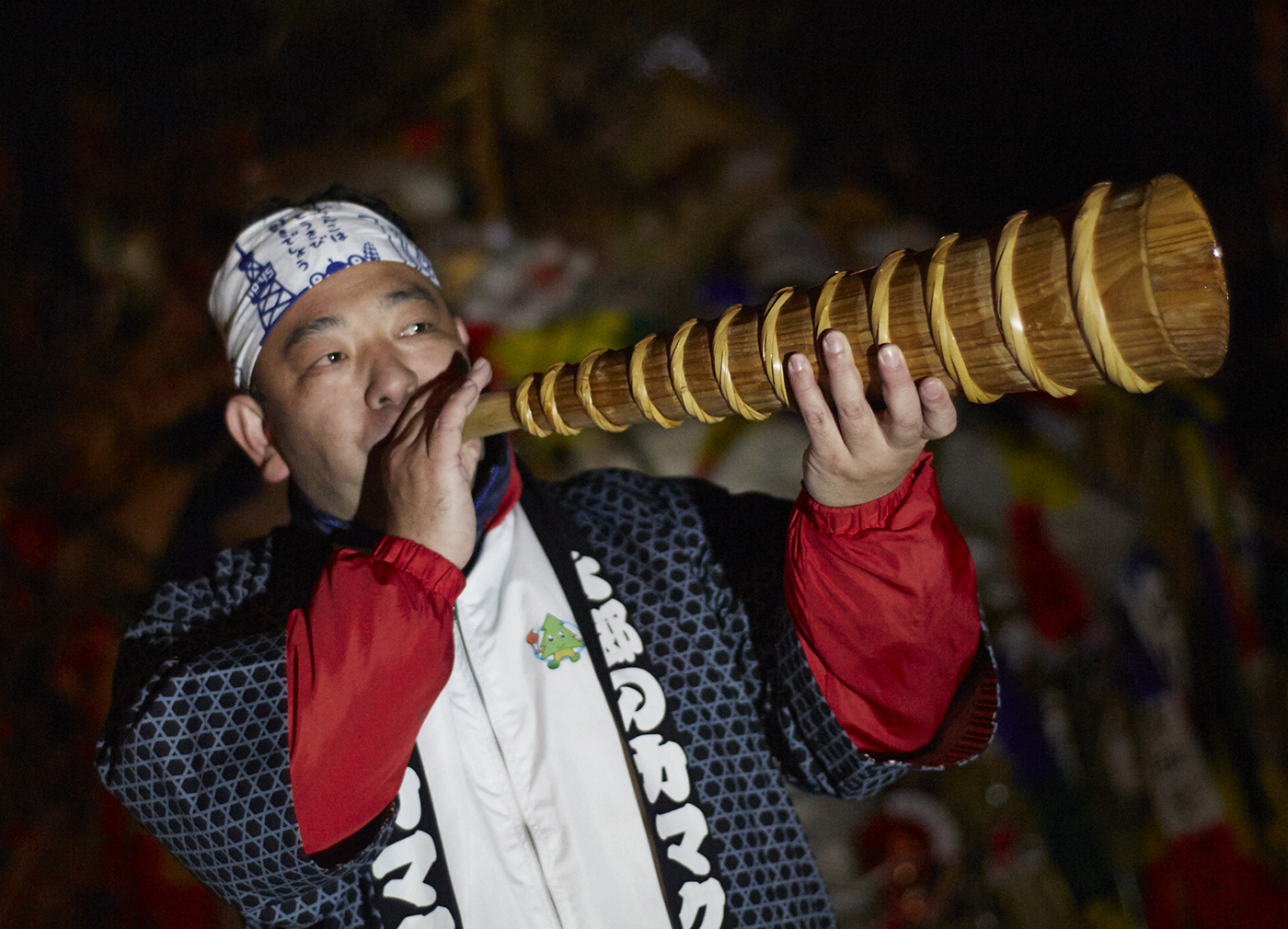 A wooden conch sounds out, “BAAAA!” The two armies come together, their bamboo sticks clashing noisily against each other. As the sticks get tangled together, men and bamboo become one swirling mass, and the pushing and jostling begins. Watch the video to see how this violent battle unfolded! 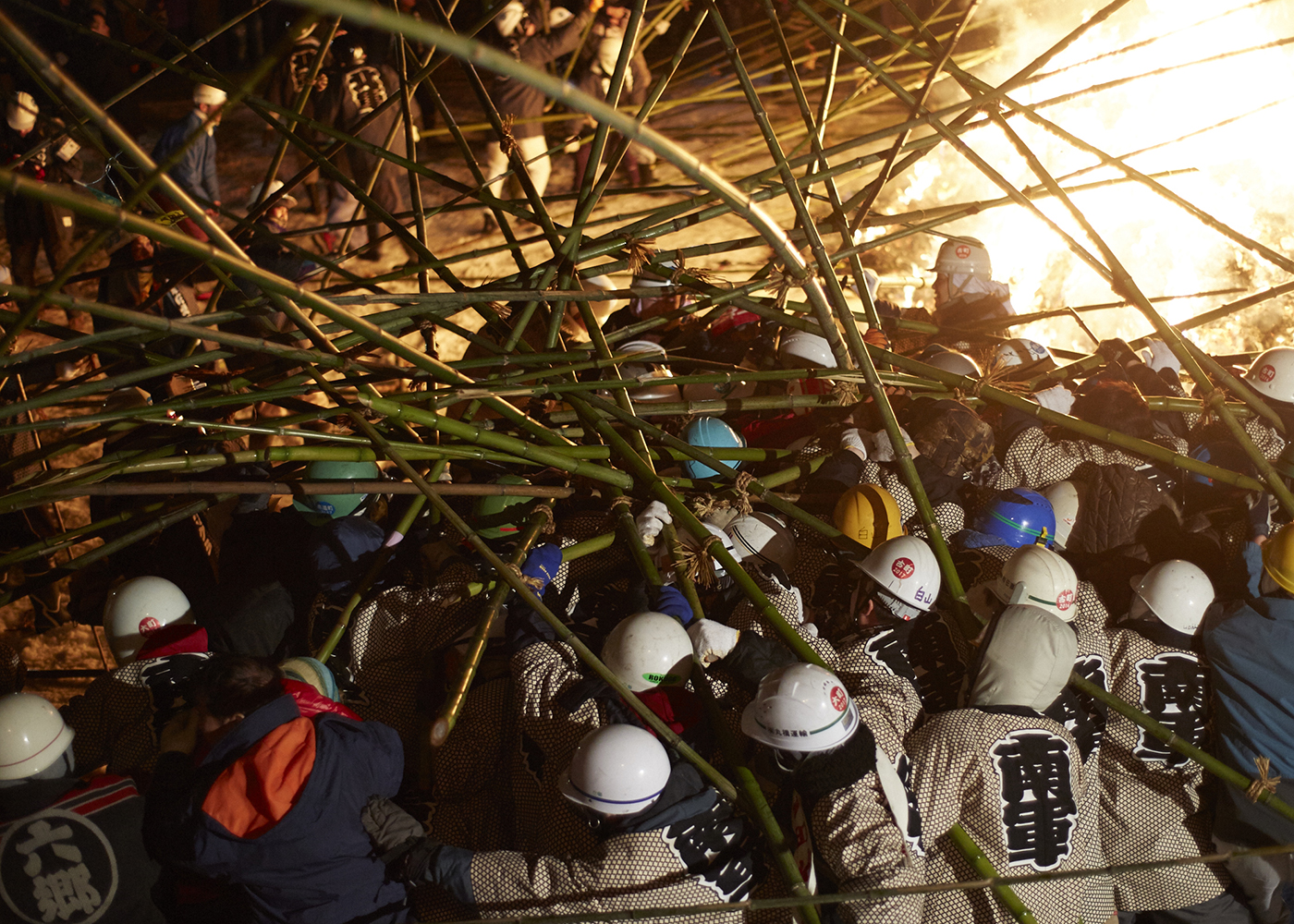 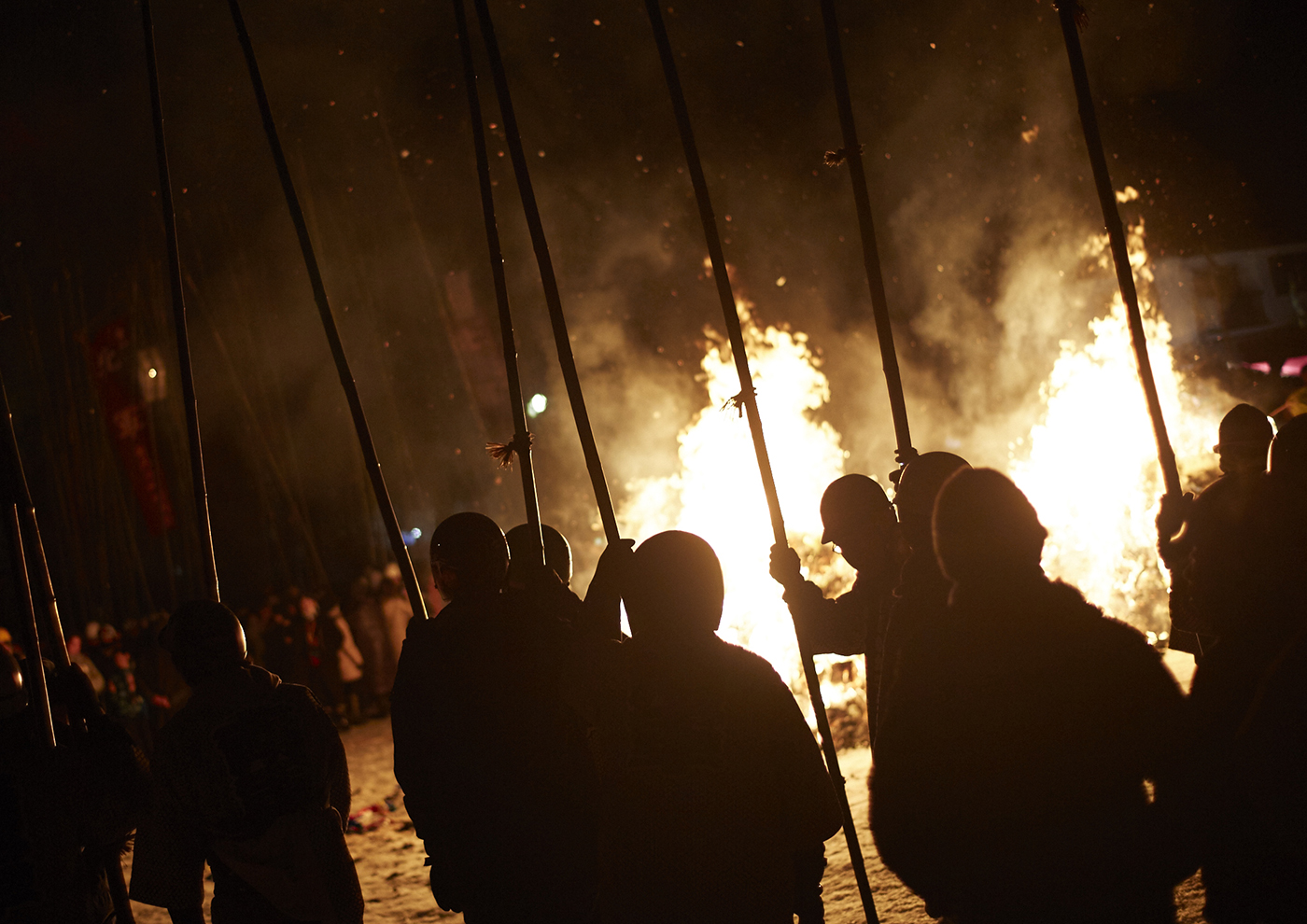 After a while, the signal for the end of the contest sounds out and the winner is announced. The result is a draw. Typically, if the North wins, there will be a bumper harvest that year, and if the South wins, the price of rice will rise. This year’s draw means that there will be a bumper harvest and that the price of rice will go up. It’s a surprise result, and that marks the end of this year’s event. 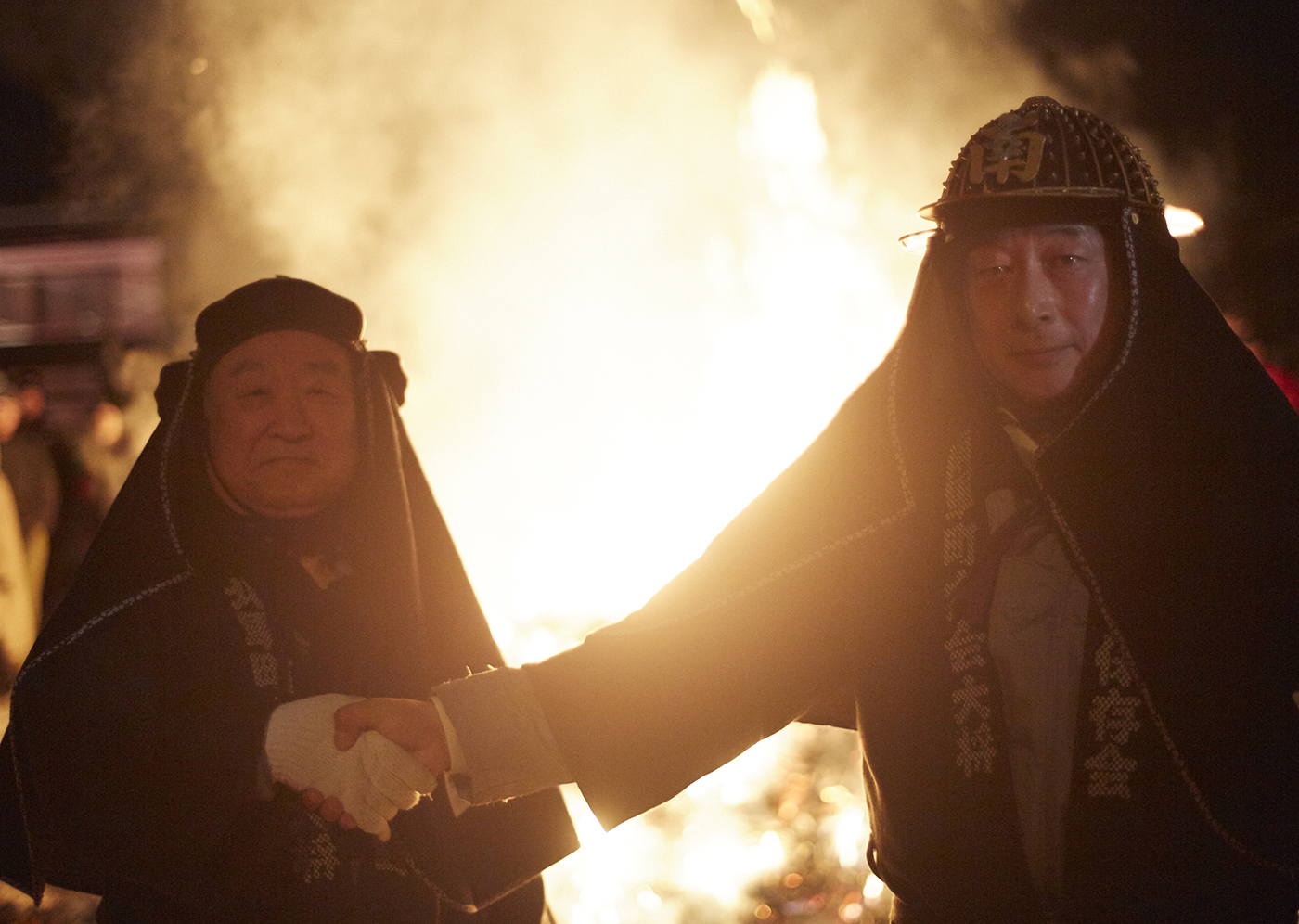 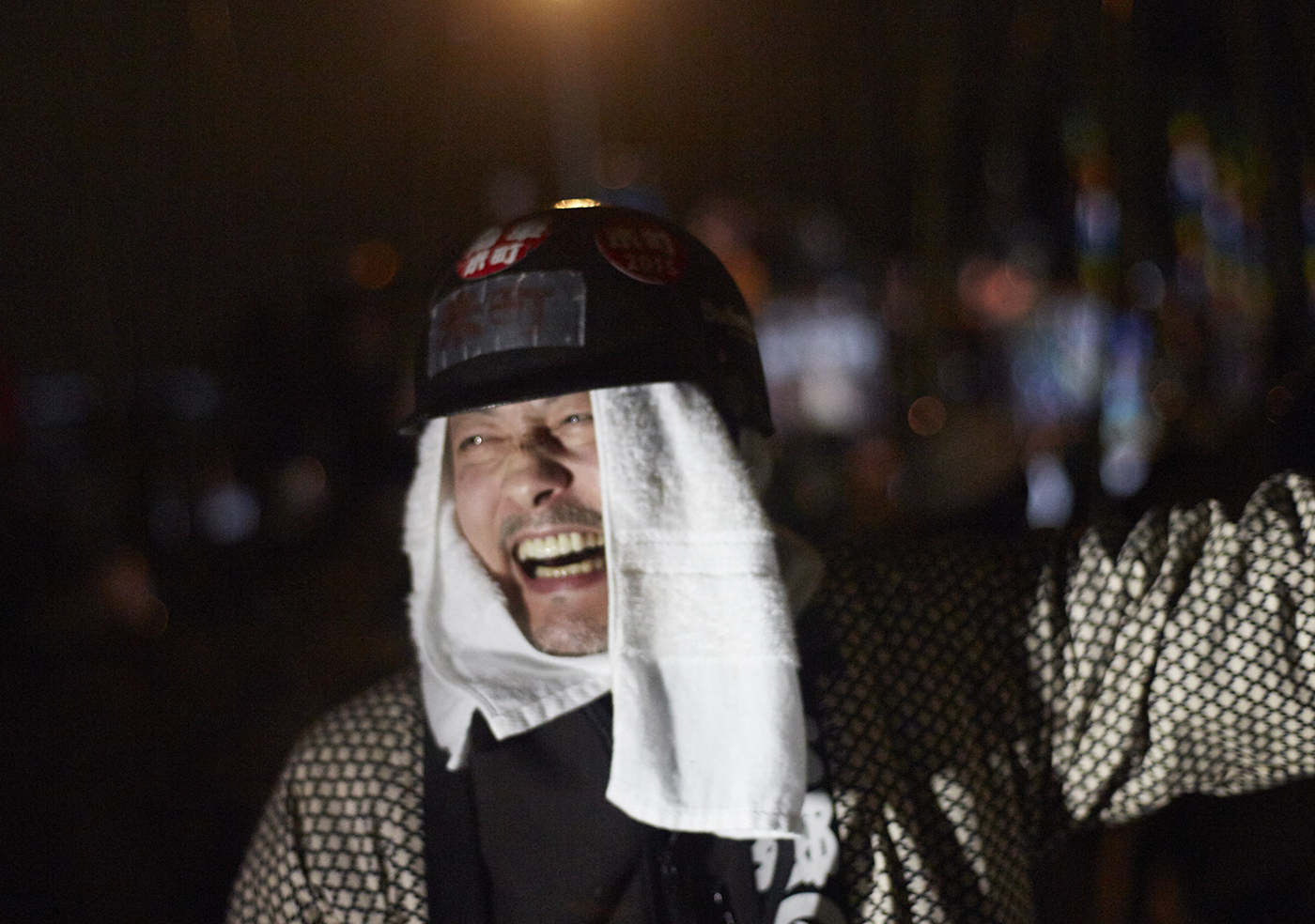 The Rokugo Kamakura combines two very contrasting experiences: calm and colorful tenpitsu which carry the town’s wishes for the year on them and the wild and violent atmosphere of the Takeuchi.Next time, we’re going to learn about the most famous kamakura event, the Yokote Kamakura. 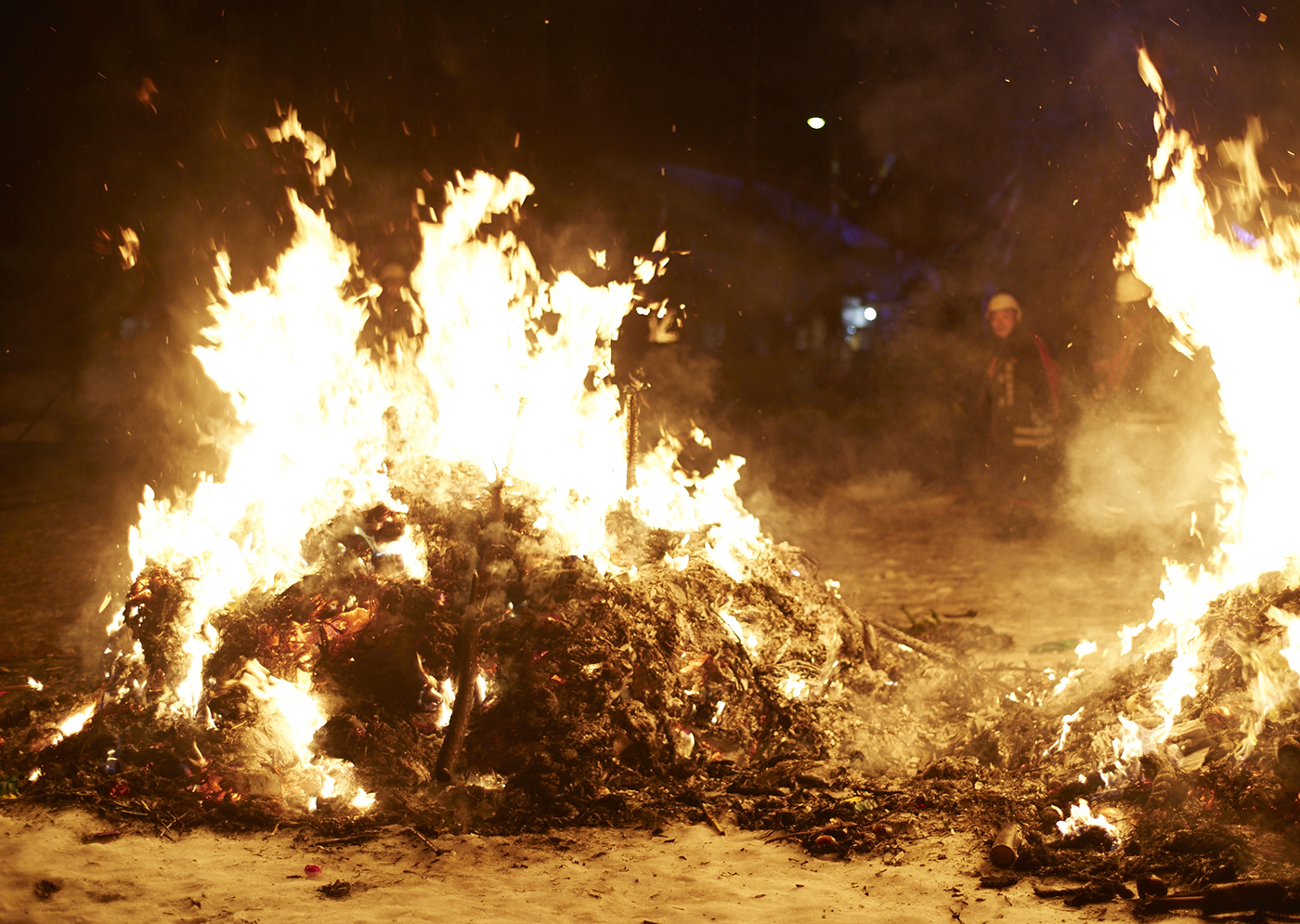