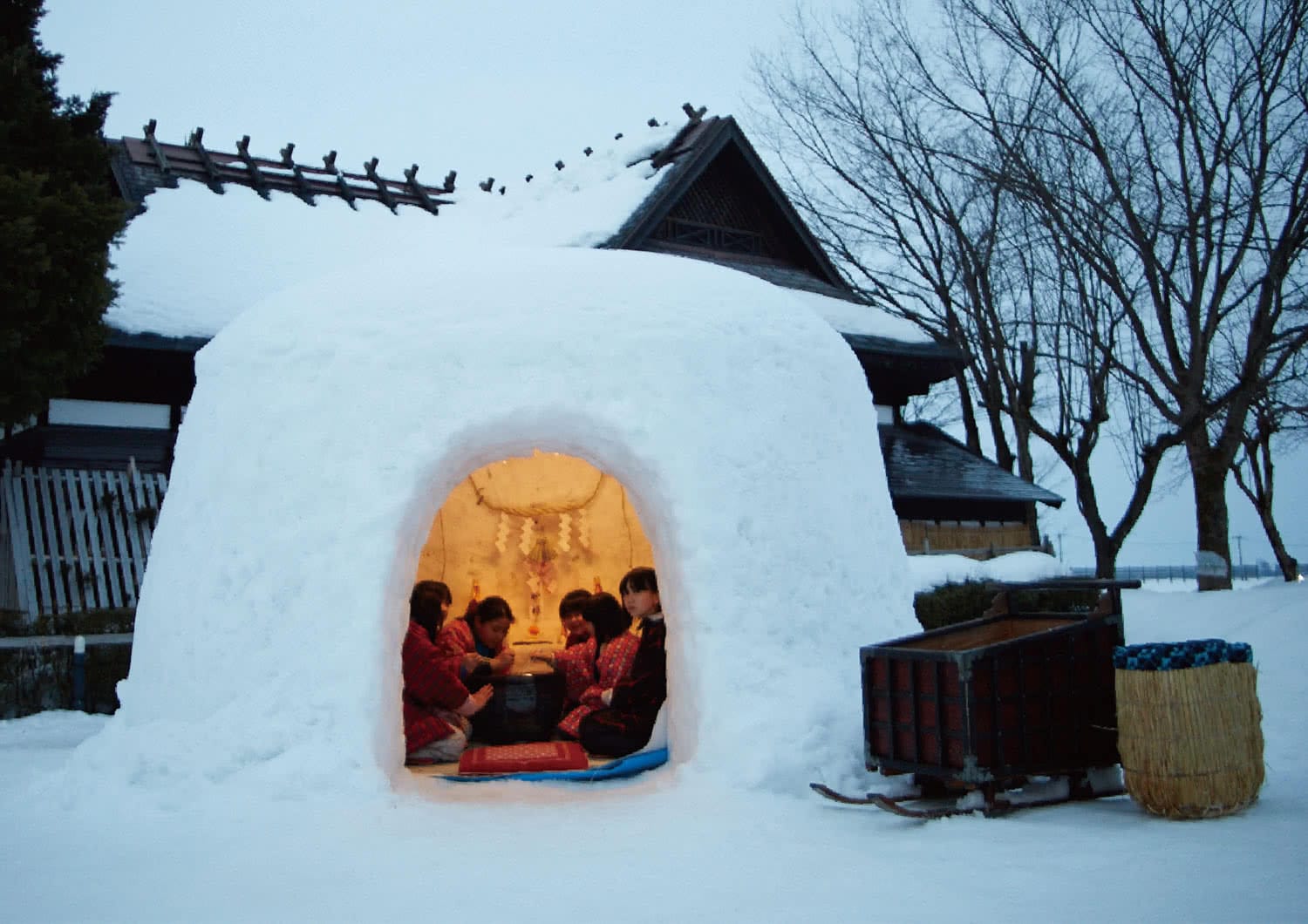 The Yokote Kamakura festival is held in Yokote every year on February 15th and 16th. Kamakura (snow houses) are built throughout the town. It’s a magical sight, and lots of tourists come to see and enjoy the festival every year.We’re at the venue for the event, talking with Yoshihito Terui from the Yokote City Tourism Association, who is chairman of the festival committee. 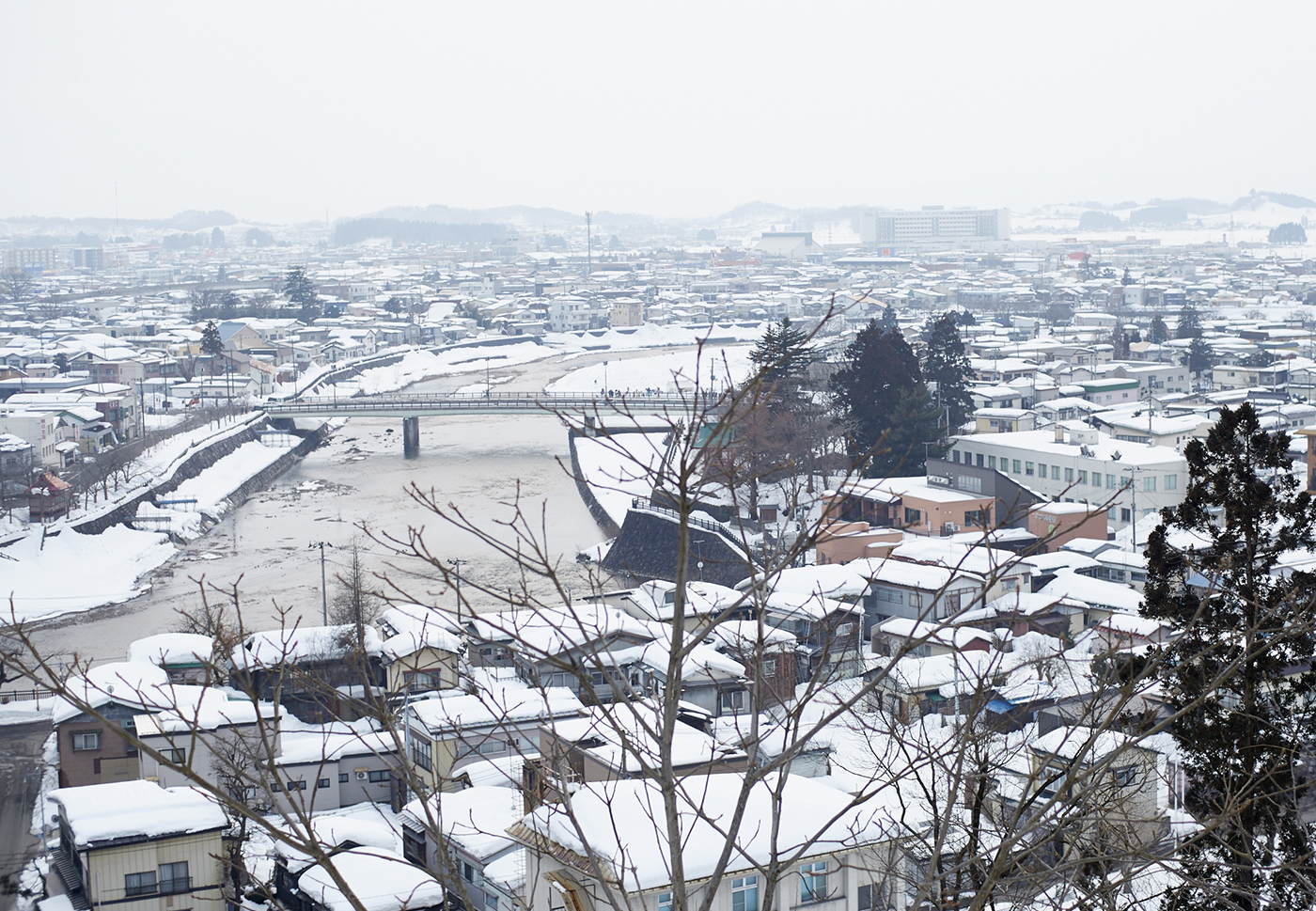 TERUI
The Yokote Kamakura festival has a lot of history behind it. It goes back around 450 years.

TERUI
There’s no written account of how the event started, but Yokote used to be a samurai town. The Yokote River flows through here. This side is where the samurai lived, while the merchants used to live on the other side.

TERUI
In the old samurai town, they held a koshogatsu event (“Little New Year”) when they used to burn all the New Year decorations, such as shimenawa (shinto ritual straw ropes). There’s a similar event like this, called Sagicho, which is held nationally, but here in Yokote they used a cauldron made out of snow for the bonfire. This is one of the theories of the origin of the festival. 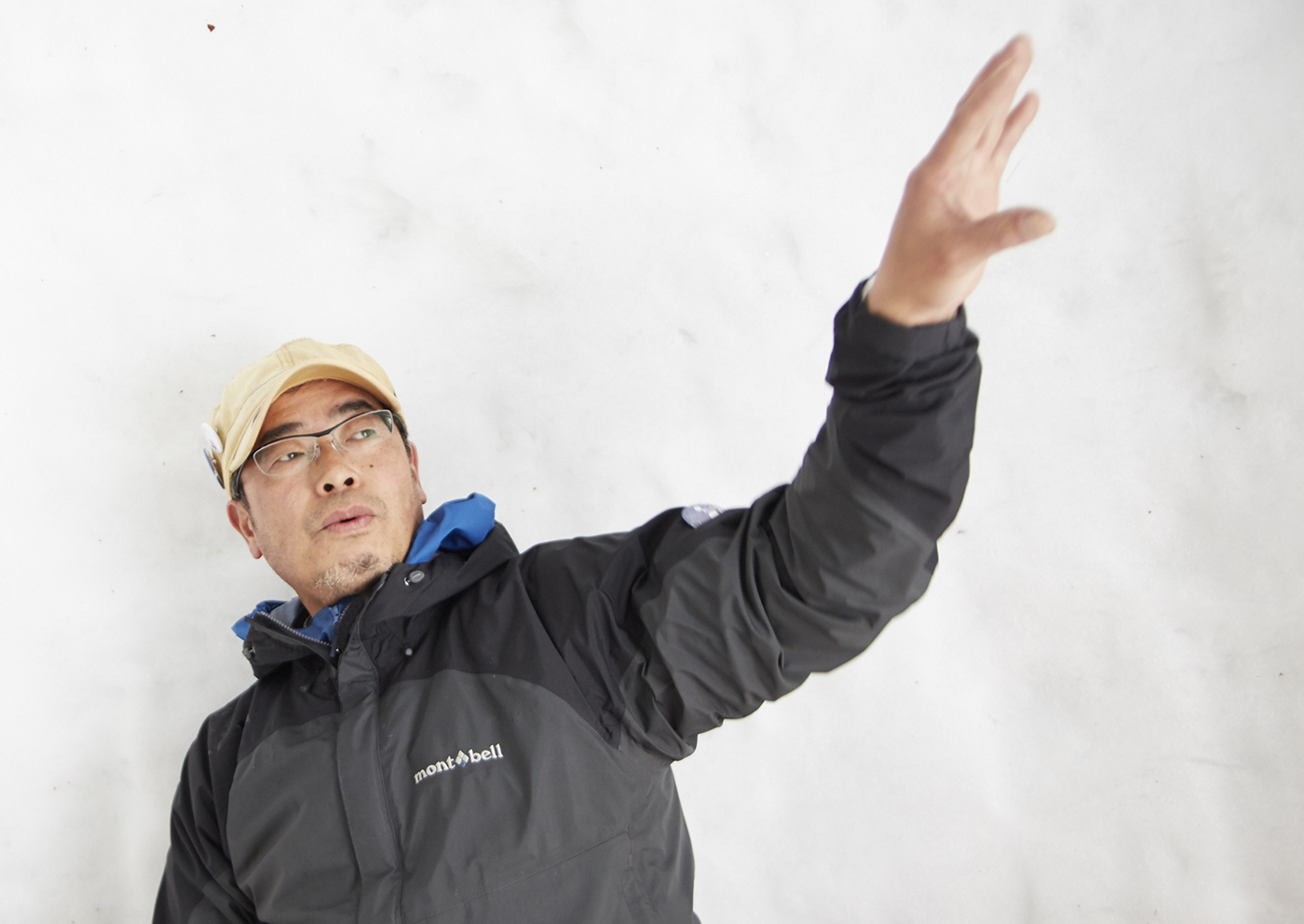 TERUI
Another theory is that in the merchant part of town, they had lots of problems with water…

YABUKI
You mean there like a disaster involving water?

TERUI
No, not so much flooding. More that there weren’t many wells so it was actually very difficult to get hold of water. So to give thanks for the water they had and to show their appreciation, the people started an event in honor of the god of water.

TERUI
There’s a lot of snow in the countryside, so it’s fun to make yukiana (snow holes), hollowing out holes in the snow. 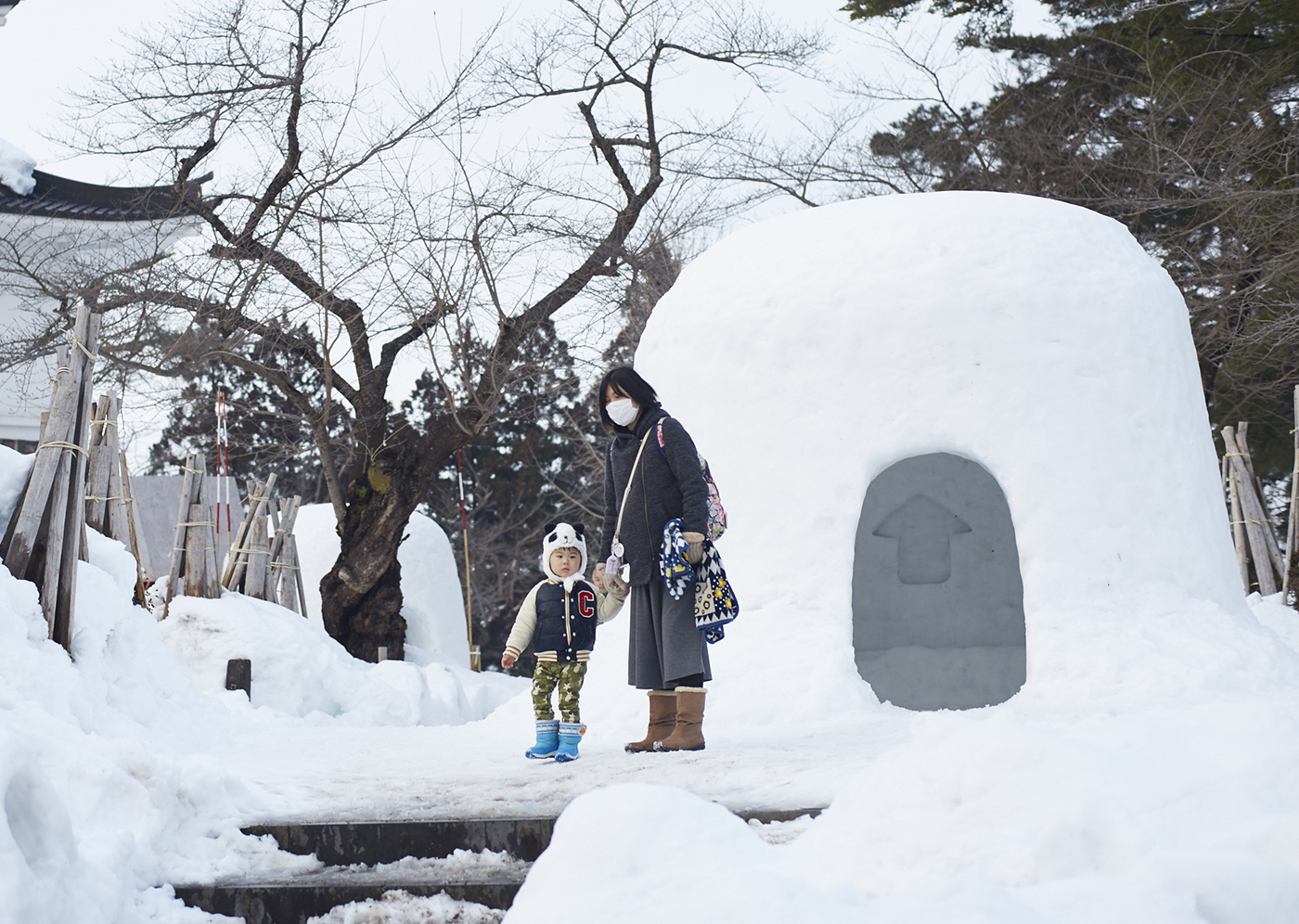 TERUI
I guess the event grew out of a combination of all these things. That’s as much as we know. So I suppose kamakura has come to mean places where the gods live or where they appear.

YABUKI
That’s really interesting! You also get theories about kamakura events in other places. They’re all quite obscure. I suppose that adds to the mystique…(Laughs)

TERUI
And, as I mentioned earlier, in this case it’s the god of water that is being honored, but that’s not to say that a festival like this has to involve worshipping a god…

YABUKI
Do you mean the god of water or something like that? 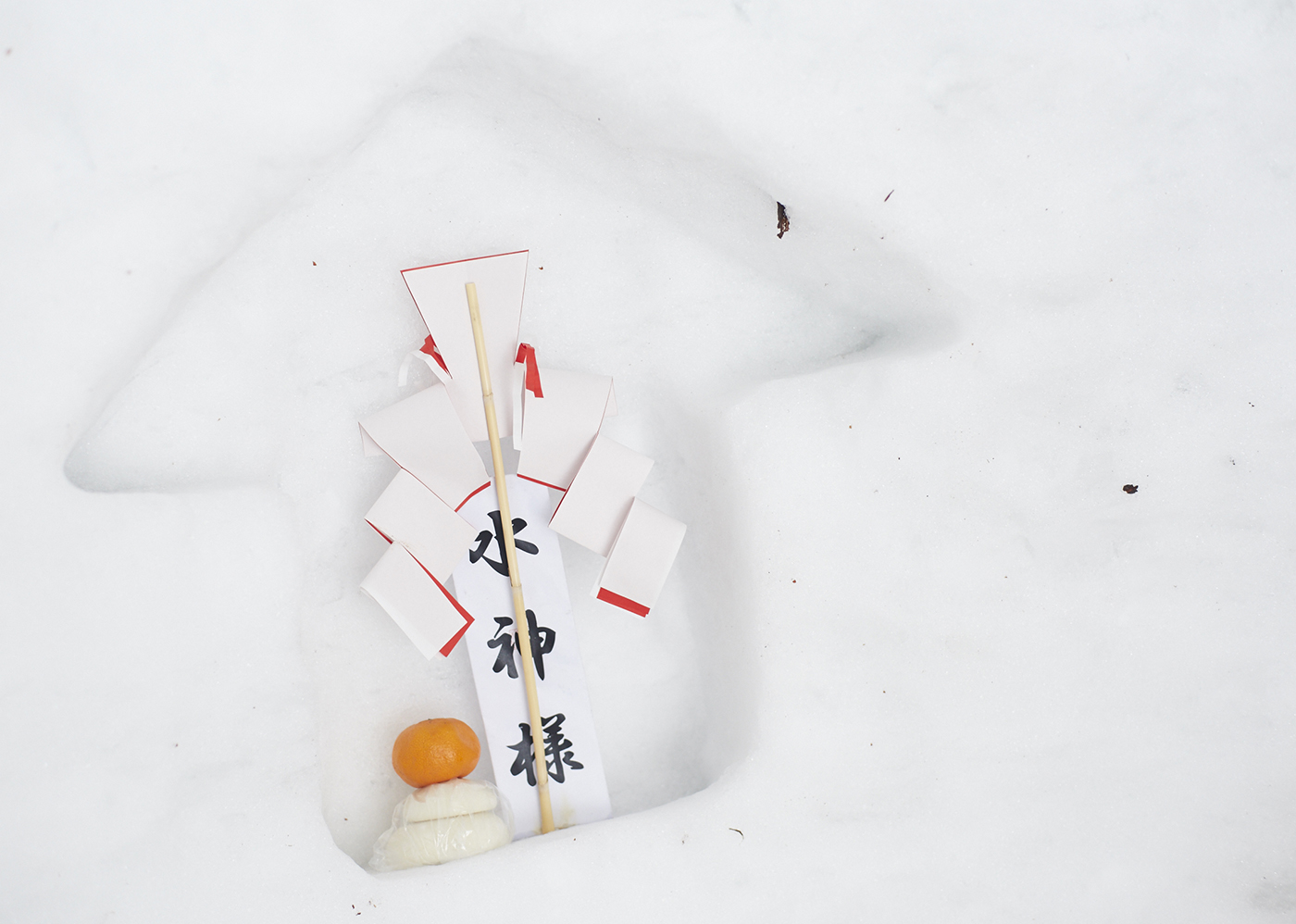 TERUI
Yes, indeed. It’s not a case of seeing God in everything, although that would be a perfectly good rationale. It’s because, in our own hearts, we feel grateful for what we have.

YABUKI
So it’s about giving thanks for whatever you feel like, eh?

TERUI
Just for these two days of Kamakura, the children can stay up late and no one minds or gets angry.

TERUI
The children put clay stoves in the kamakura and cook mochi (rice cakes) and pour out amazake. “Come and drink some amaeko [amazake],” they say, and invite guests inside their snow houses. 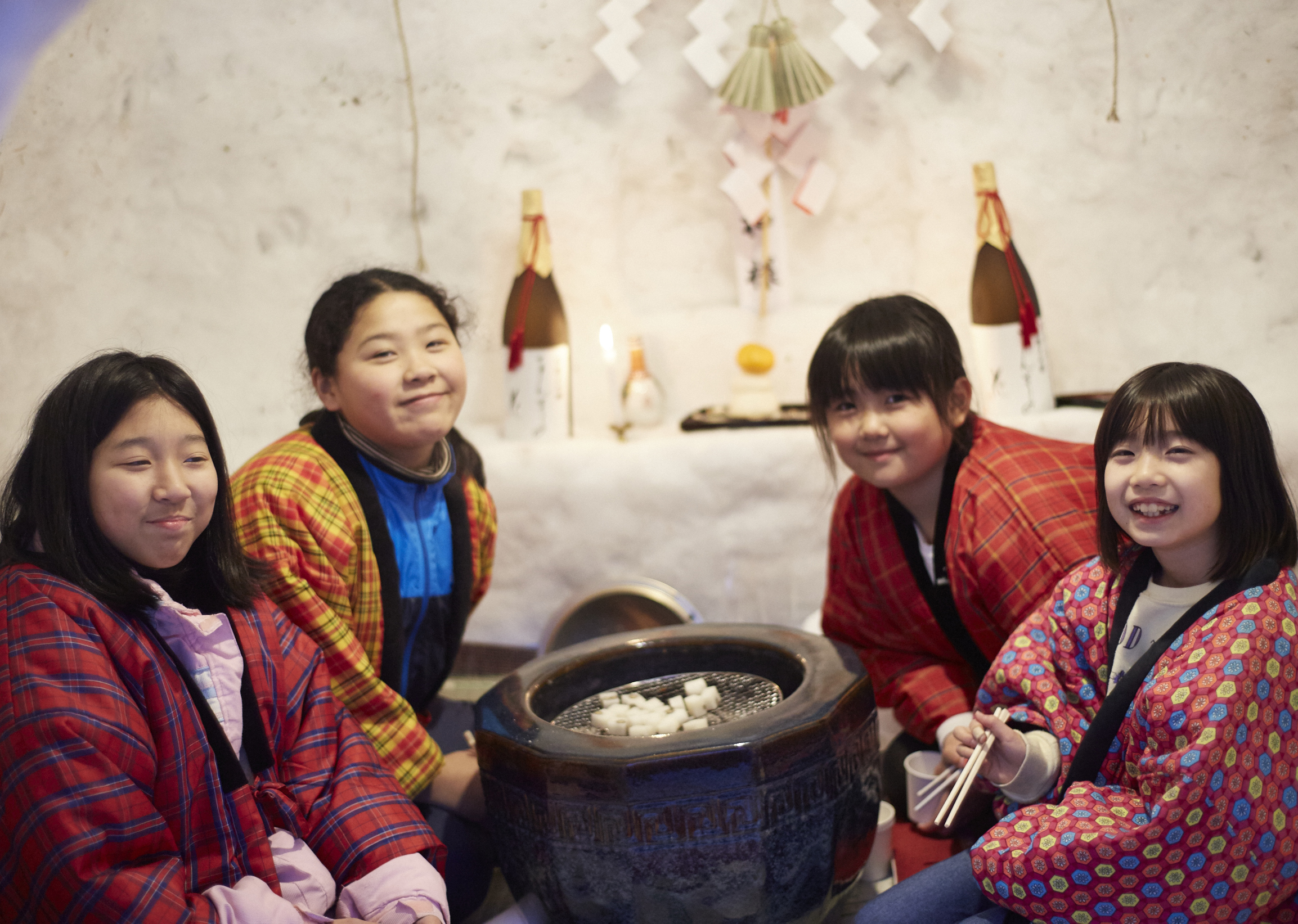 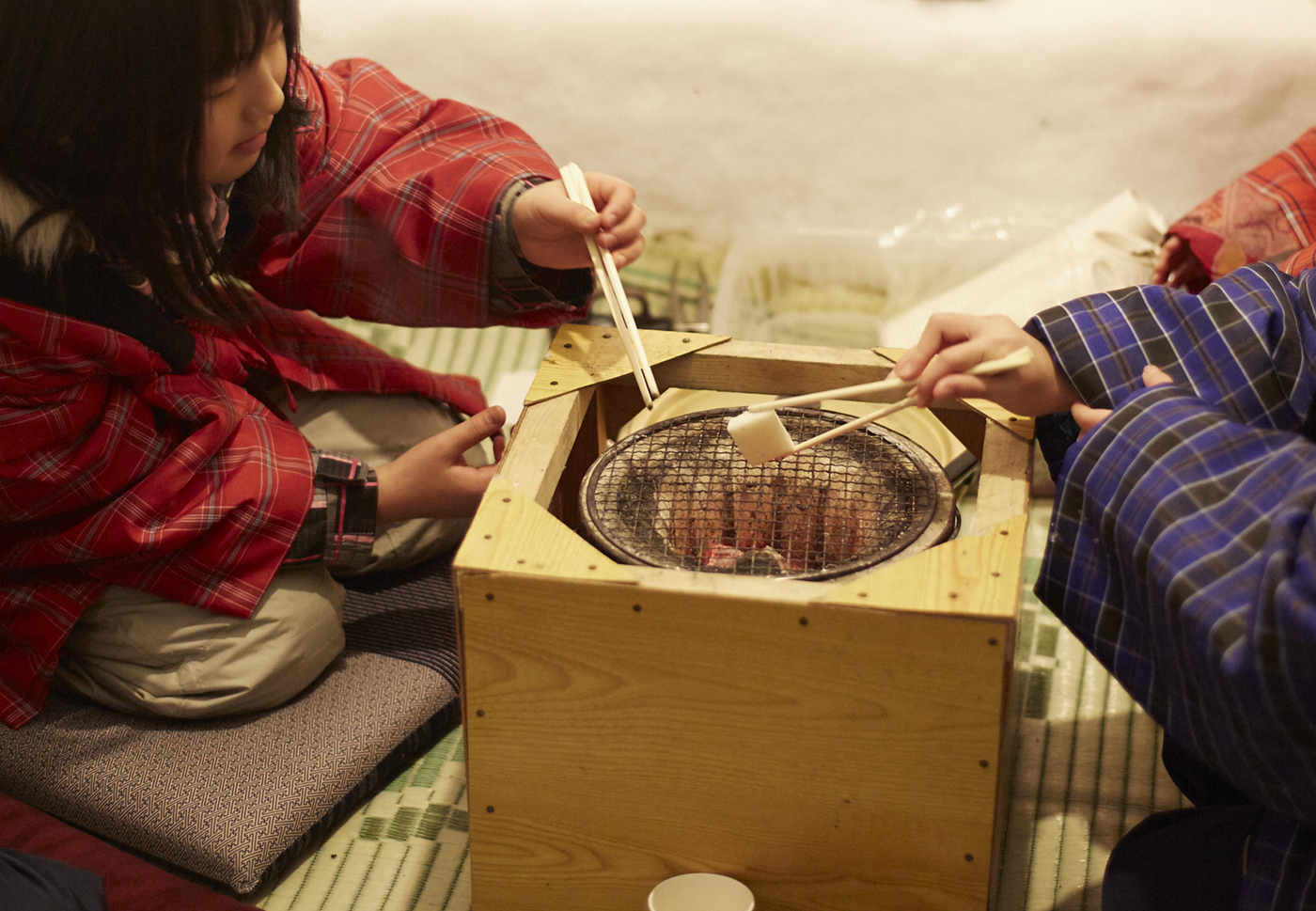 TERUI
For these two days, the children are the lords of the house. You wouldn’t normally hear children saying things like “Please have a drink [of sake].”

YABUKI
No. I should think not! It’s like they’re playing “Happy Families” and copying the kind of things that their parents would say.

TERUI
I guess so. They’re pretending to be grown-ups and saying things that adults say. From their point of view, they like asking the grown-ups to join them because they’ll get an offering to the deity or a bit of pocket money out of them.

TERUI
Children and adults know each other so well, eh? This isn’t so much a “festival” as an “event.” 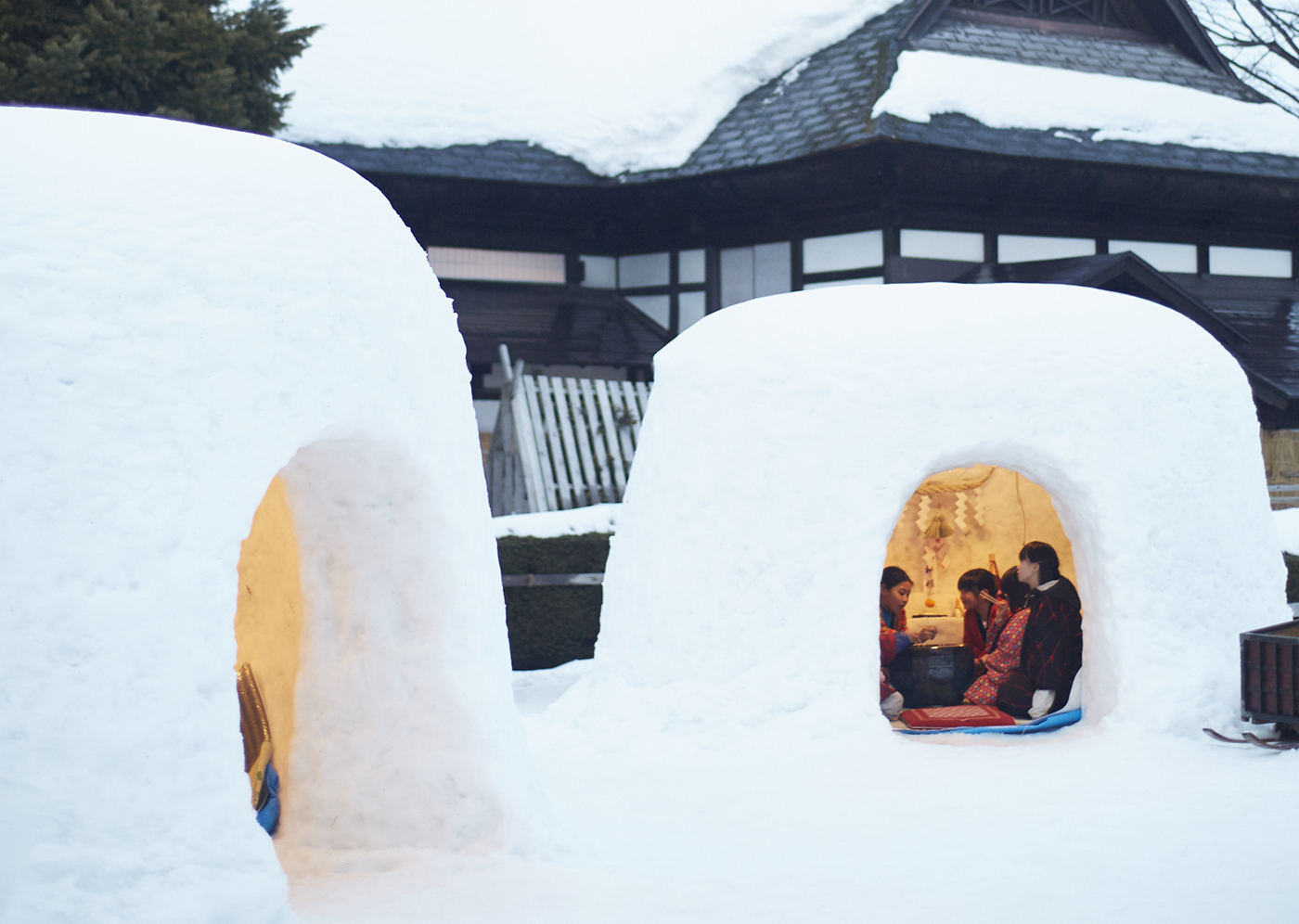 YABUKI
Children get such a thrill out of things like this, don’t they?! I have to say I’m so impressed. There are so many snow domes all over the town… Much more than I ever imagined. It’s so atmospheric!

TERUI
As a general rule they are around 3.5m wide and 3m high.

YABUKI
I heard that there are professional kamakura builders…

TERUI
Yep. That’s true. This year there are 20 or so. They’re aged late 30’s upwards. The oldest one is actually 77! They’re usually farmers or stone masons. They do this in winter when they tend not to have much other work on.

YABUKI
If they’re professionals, are they building a lot of these?

TERUI
The professionals themselves make around 80 kamakura every year.

YABUKI
That many? Wow! 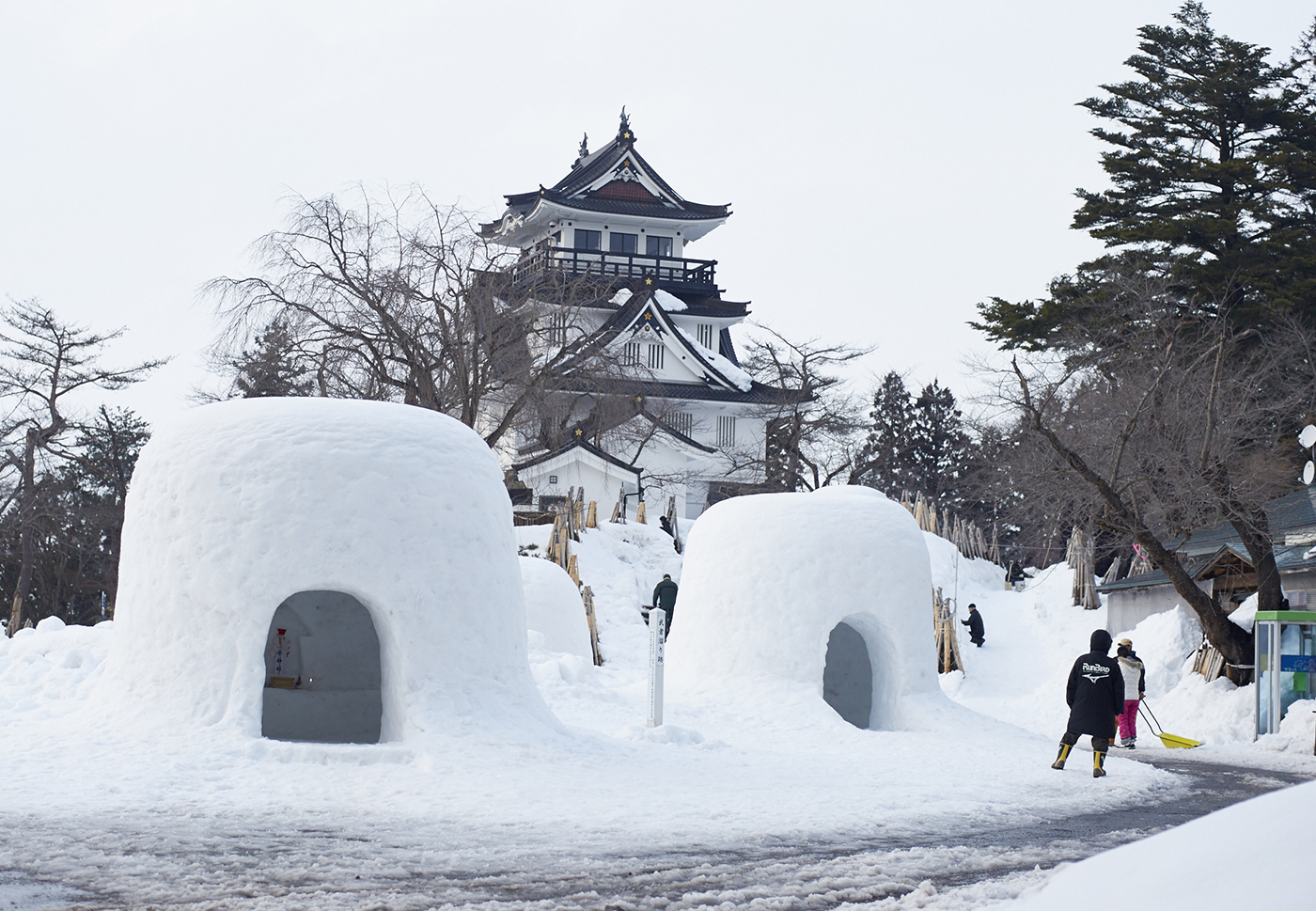 TERUI
But besides these, some families also make their own, and sometimes businesses sponsor the building of a kamakura. So during festival time there might be around 100 of these throughout the town.

YABUKI
How long does it take to build them?

TERUI
People start building from around the middle of January, a month before the festival. During that period, you might also have to make a few repairs to make sure the structure doesn’t fall over.

YABUKI
So it takes quite a bit of time to make each one, doesn’t it? 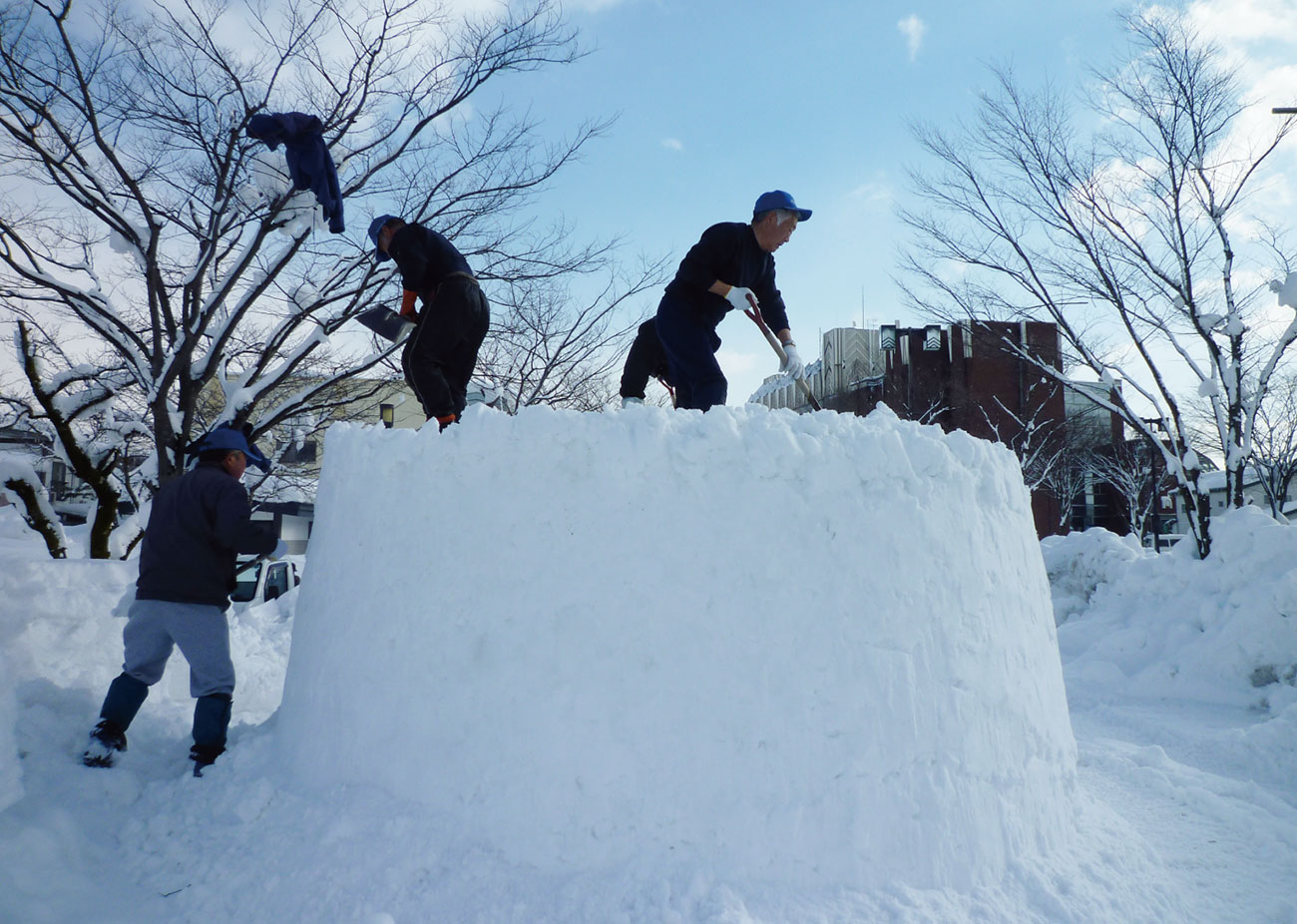 TERUI
Yep. That’s true. For each kamakura, you’ll have a group of four people working together. It takes half day a to pile up the snow with a snow loader. Then, another three days to pack the snow down and make it firm. Then about a half day to hollow the dome out.

YABUKI
I guess a lot of people still think you make these by piling up snow like bricks?

TERUI
That’s right. In terms of the shape, the kamakura used to be longer and flatter like an oblong, but nowadays they’re taller and narrower.

YABUKI
So why did that change?

TERUI
It’s to do with the roads. We don’t want them obstructing the cars if we build them at the side of the road. Over the course of 450 years, this event has adapted with the times and even the shape of the kamakura has changed. 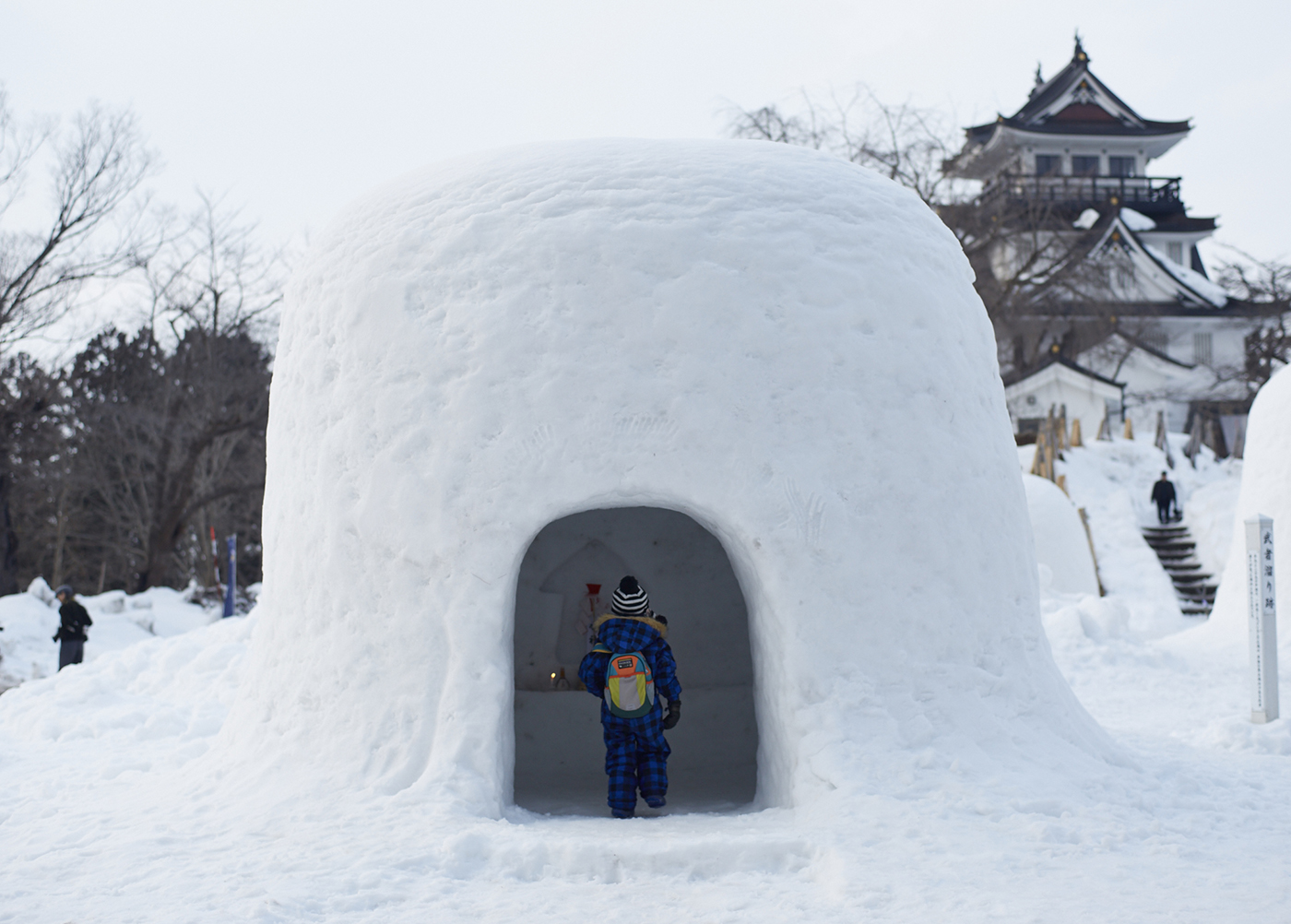 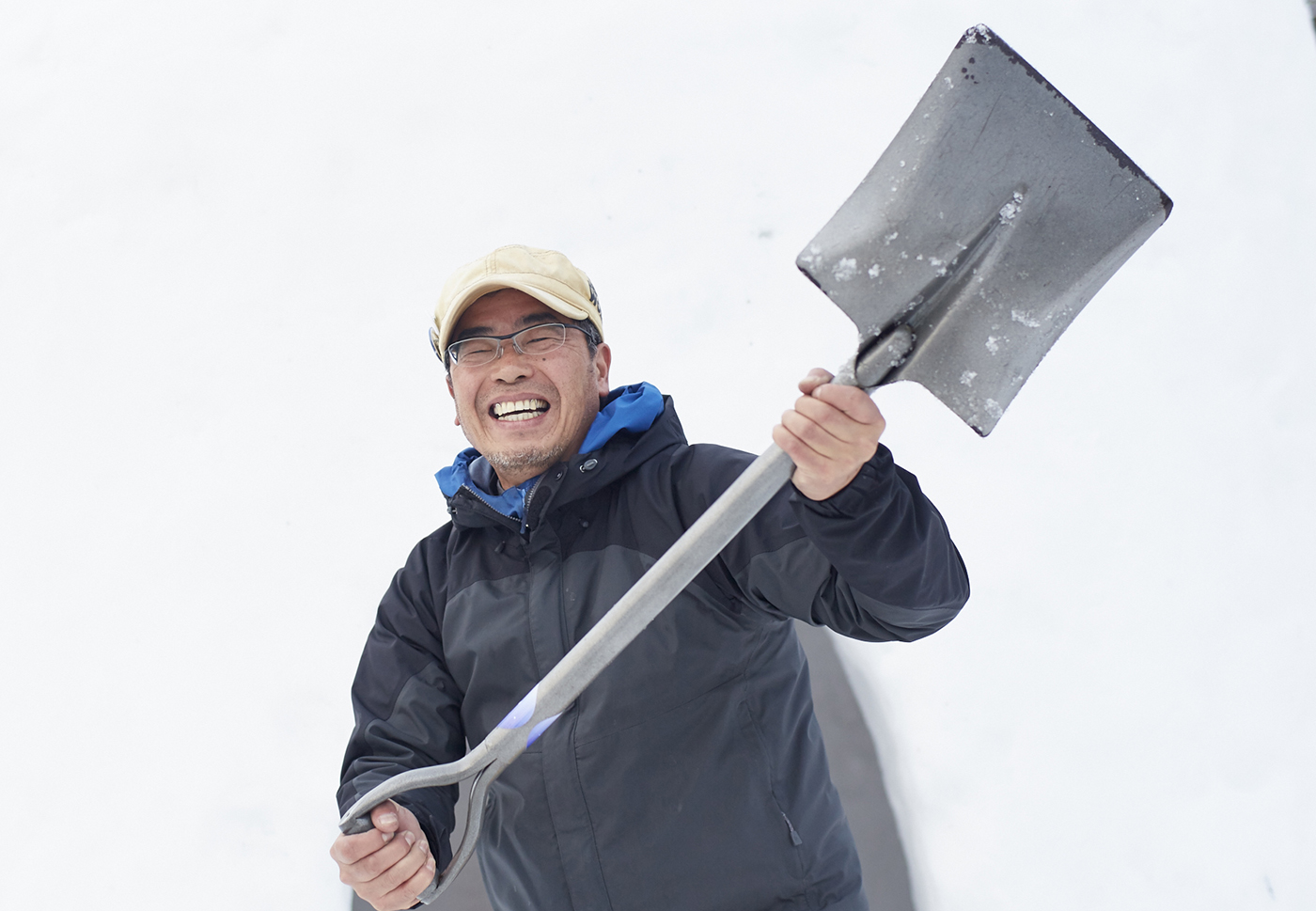 We’ve learned a lot from Terui-san about the Yokote Kamakura.Next time we’ll hear more from him about the background to the event and about its prospects for the future.