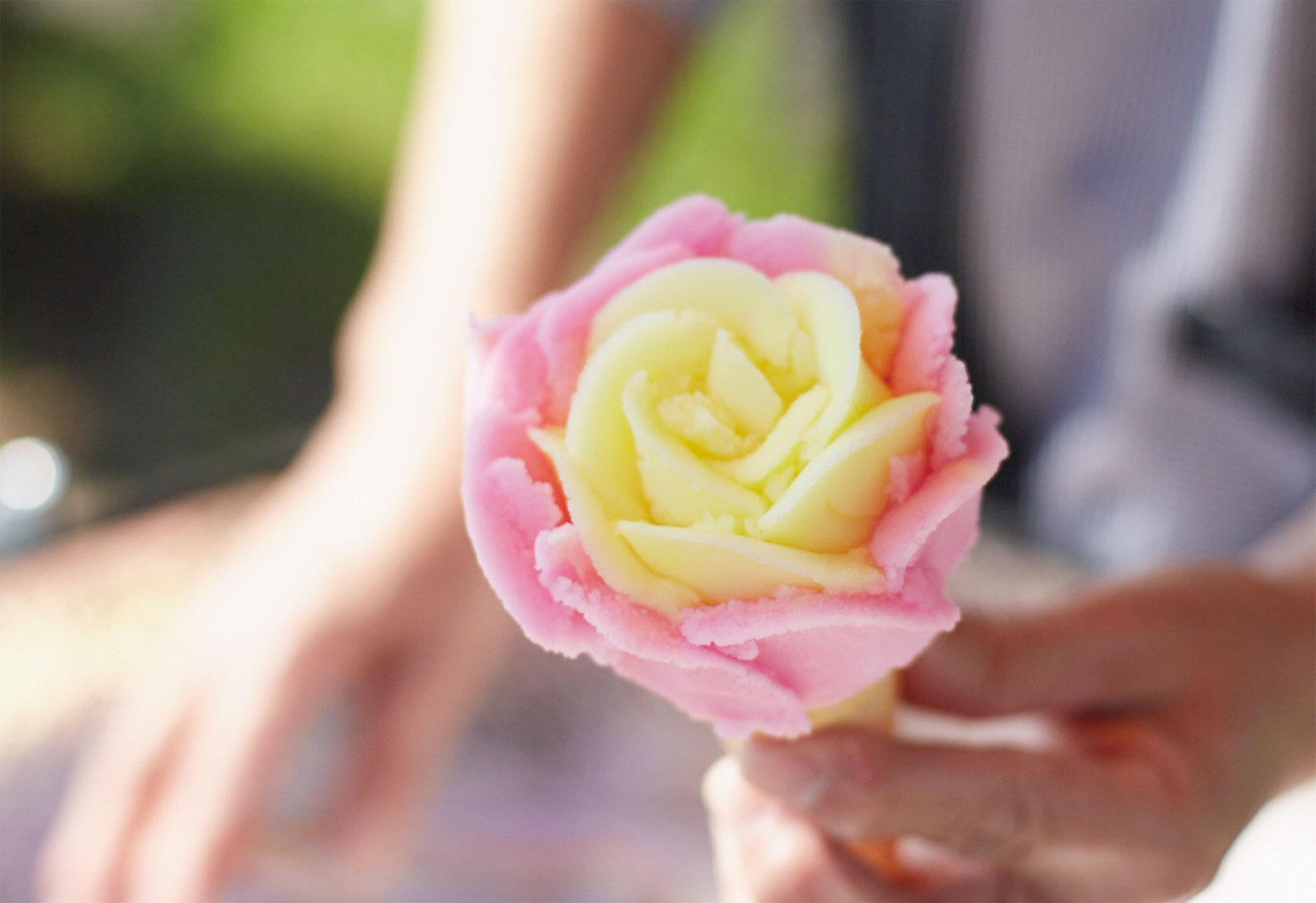 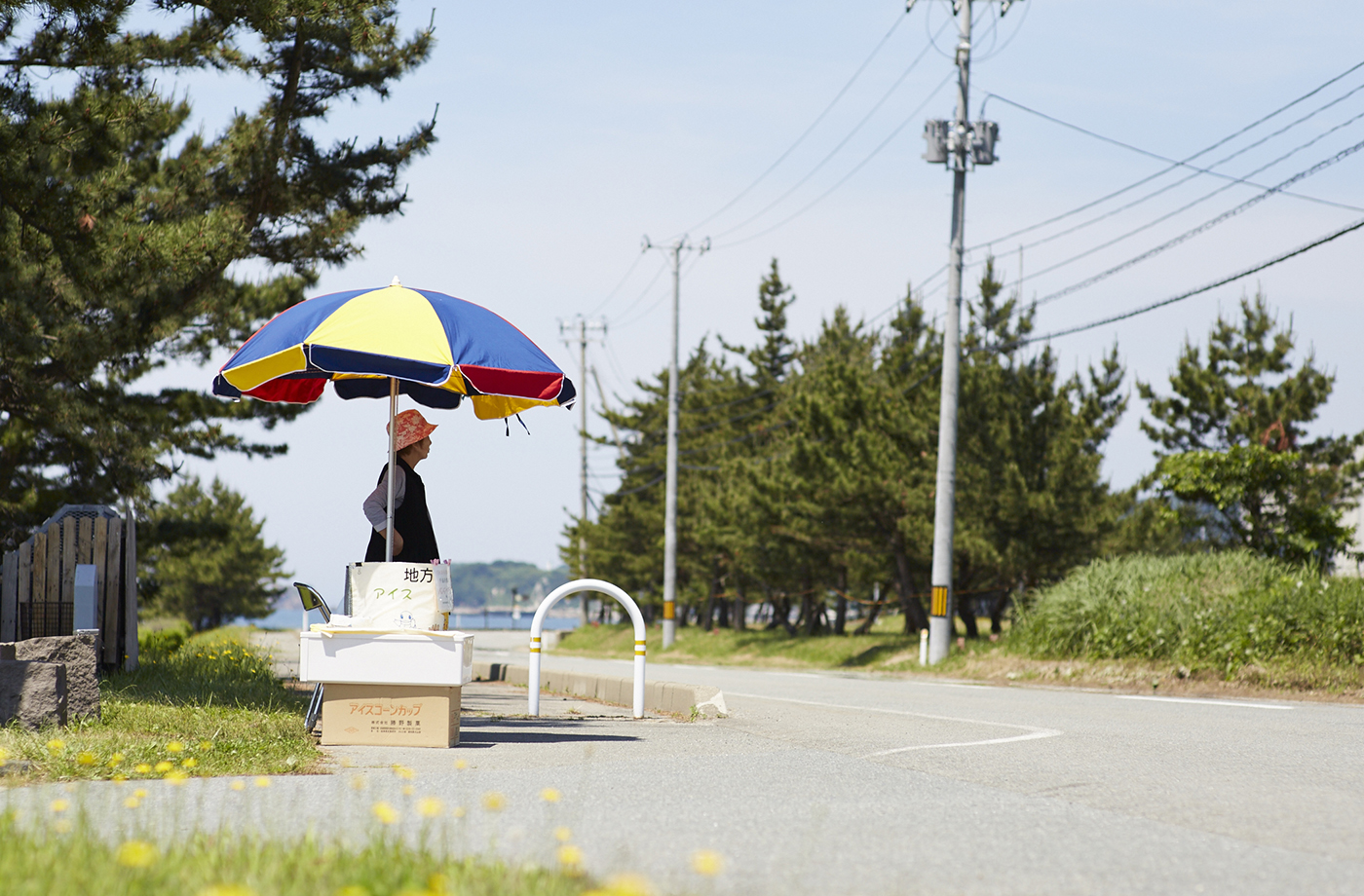 As summer approaches, colorful parasols start appearing at the side of the roads in Akita. Beneath them, you’ll see elderly ladies in brightly colored aprons selling ice cream. They are selling “babahera ice,” a summertime tradition in Akita.The ice cream sellers, the “baba” (literally “old ladies”), scoop up the ice cream using a spatula (“hera”). Hence the name “babahera.” The more experienced sellers can shape your ice cream into the shape of a rose, known as a “baramori”. Everyone in Akita knows about this ice cream: it’s famous as a specialty product of the prefecture.Today we’re going to learn all about babahera ice cream!

1Off to the Babahera Factory!

The factory we’re going to today is approximately 40 minutes away by car from Akita. Chigama Reika in Wakami, Oga, is one of the producers of babahera ice cream under the trade name, Namahage Ice.The company sells its ice cream at different locations around Akita at the weekend and on public holidays. During the week, it’s busy preparing for selling its ice cream at the weekend. Today, we’re going to speak with Mr. Hajime Chigama, the president of the company. 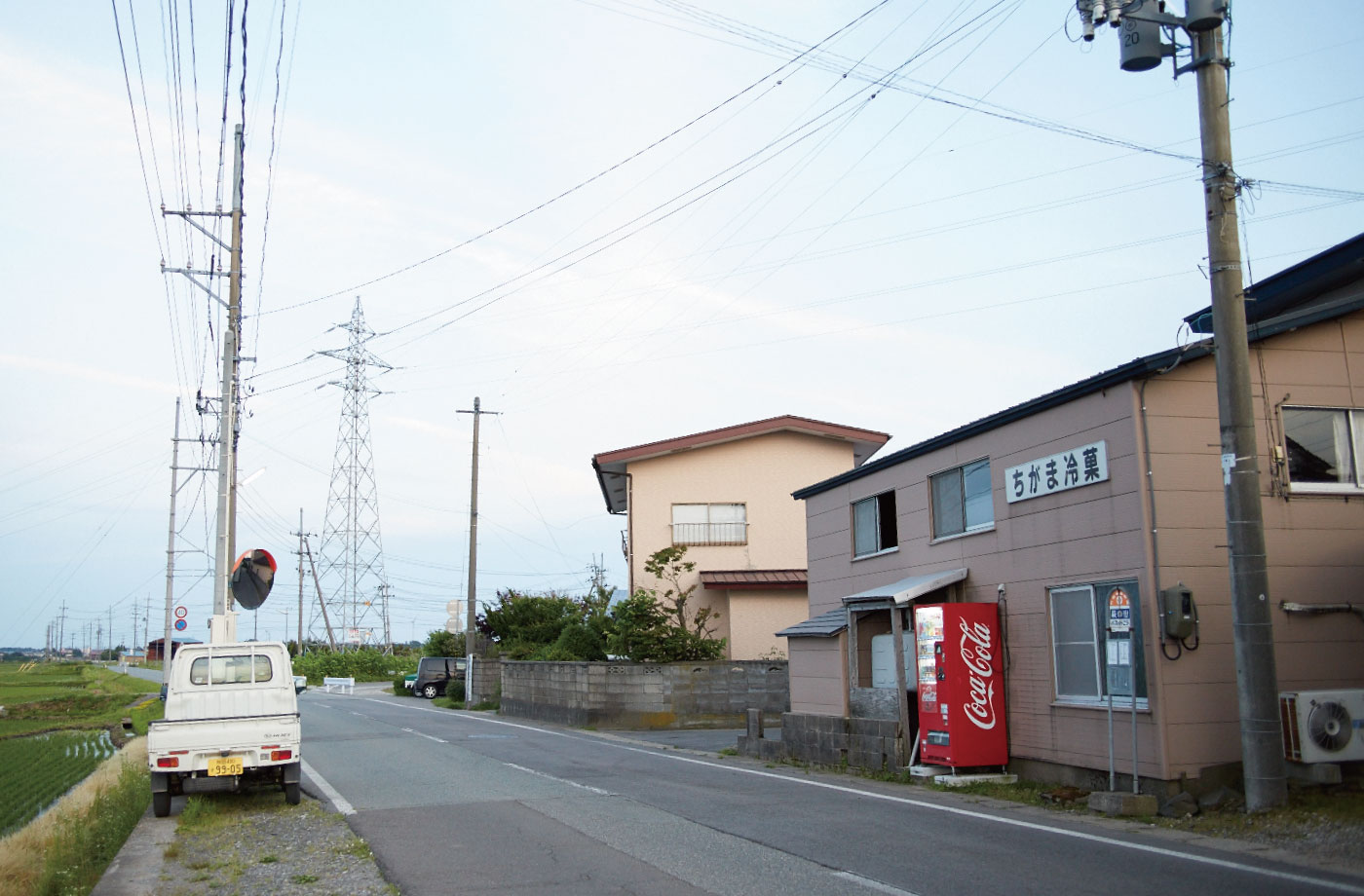 As I arrive, I see a machine with fluffy pink paste pouring out of it.

YABUKI
Look at what’s come out of this machine! Is this going to be turned into ice cream?

CHIGAMA
Yes, why don’t you try some!

(He offers me some of the pink paste) 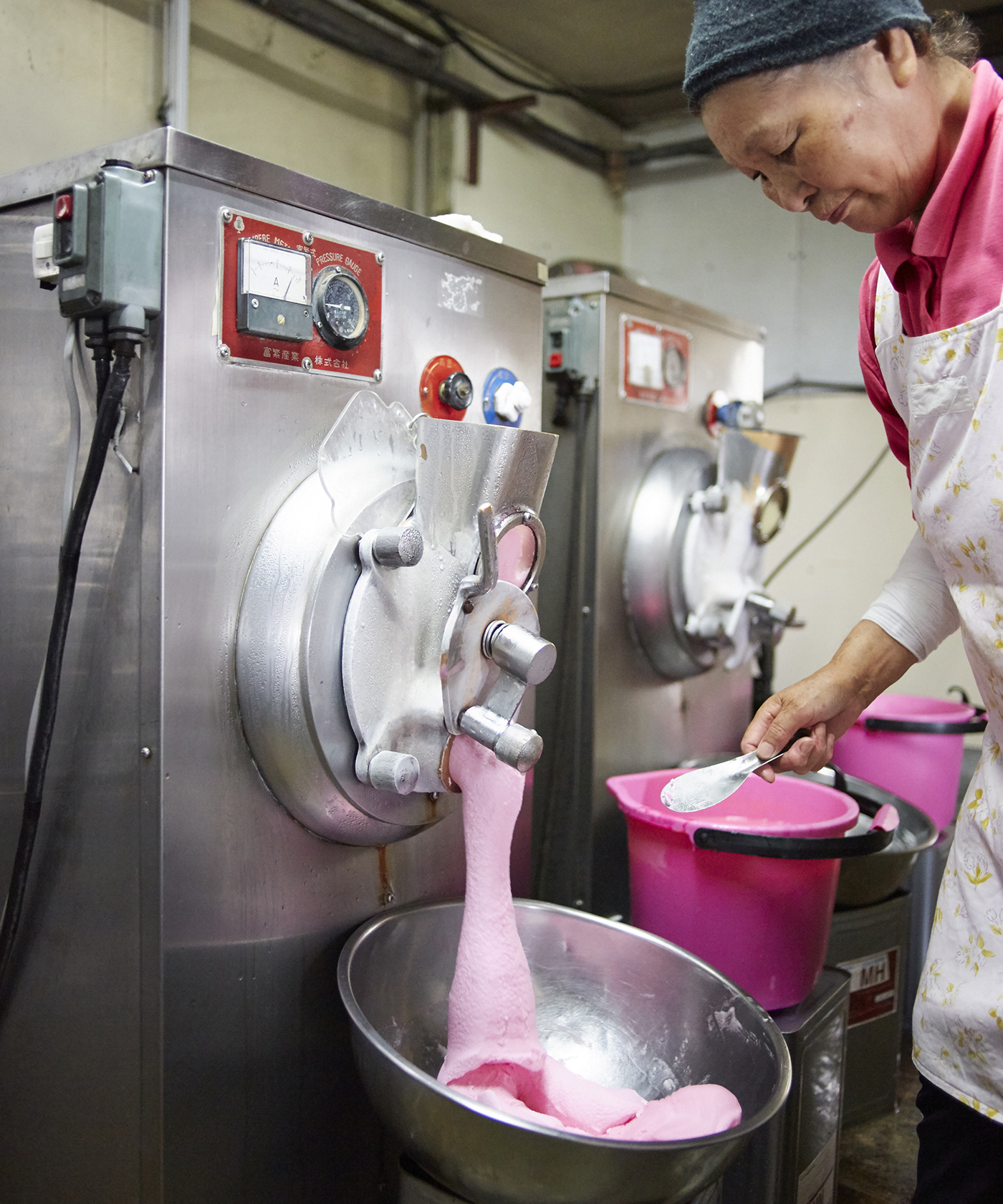 YABUKI
Woah! Strawberry flavor! Thank you! I’ve never eaten just the pink part by itself… Here’s the yellow one! Lemon flavor.Ah – delicious! Chigama-san, I like the way it’s not too sweet. It’s very refreshing!

CHIGAMA
Well, it’s very sweet to start with. Then we add milk and that gives it a refreshing edge. We use more milk than others do. Some makers use roughly a bag and a half, but we use four bags of milk for each batch. The amount of the milk makes a huge difference.

YABUKI
I see. So you put milk as the base. The ice cream has two flavors, strawberry and lemon. Do you pack the ice cream like this in the tub, half and half of each flavor? 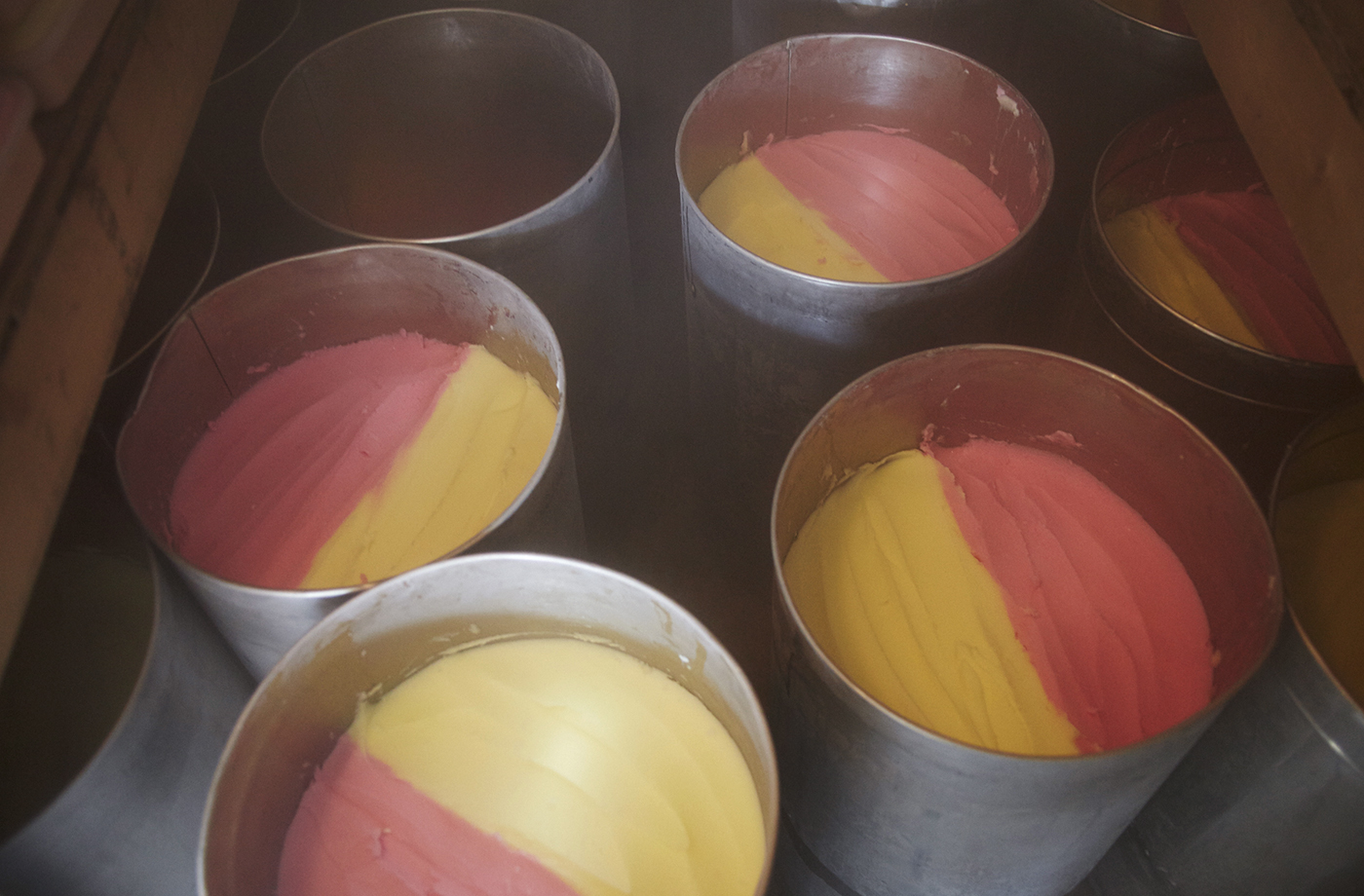 CHIGAMA
Well, at the moment, the texture is too rough. Next, we need to freeze it and condense it. It hardens in the freezer over there at minus 16 degrees, then we move it to this freezer at minus 23 degrees. It takes around two days altogether to set.

YABUKI
I see. You cool it very well in two stages… How many portions of ice cream are there in a tub?

CHIGAMA
If you know what you’re doing, you can get 600 servings out of each tub.

YABUKI
Is that a day’s worth of sales?

CHIGAMA
We don’t sell that much in a day now, although we used to in the past.

YABUKI
How long have you been in business selling ice cream?

CHIGAMA
Around 40 years. Having said that, we’re one of the newer companies.

YABUKI
And how long has babahera ice itself been going?

CHIGAMA
Probably around 50 to 60 years. The first people to make it were traditional Japanese confectionery makers. In the old days, they sold frozen varieties of Japanese sweets as well. Originally, the ice cream used to be completely made by hand, but nowadays of course we make it with machines. It was logical to think “Why not turn this into a business?” People who used to work for those stores gradually left and started their own businesses, and that’s why you have all the different companies today.

YABUKI
I see! And have you always used spatulas to pack the ice cream like this? 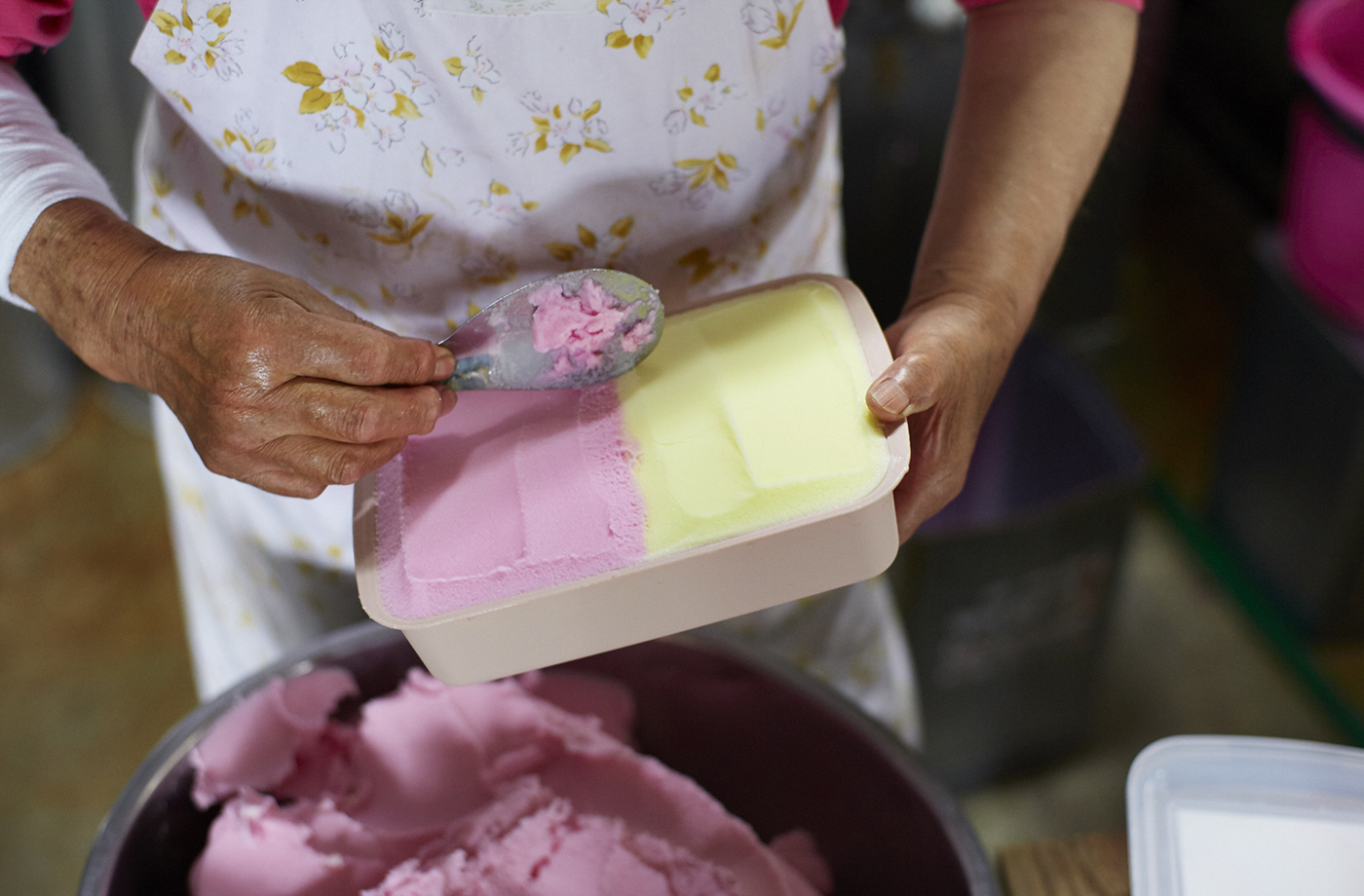 CHIGAMA
Right from the start. It can all be done automatically now, but in the old days we packed the containers with what we were going to sell each day by hand in the mornings…

CHIGAMA
Yep, I used to do that as well. It’s been passed down through the generations. This is what people always used to do. The actual process hasn’t changed at all.

YABUKI
It’s amazing that it hasn’t changed in 40 years.

CHIGAMA
I’ve not been brave enough to change it (laughs). 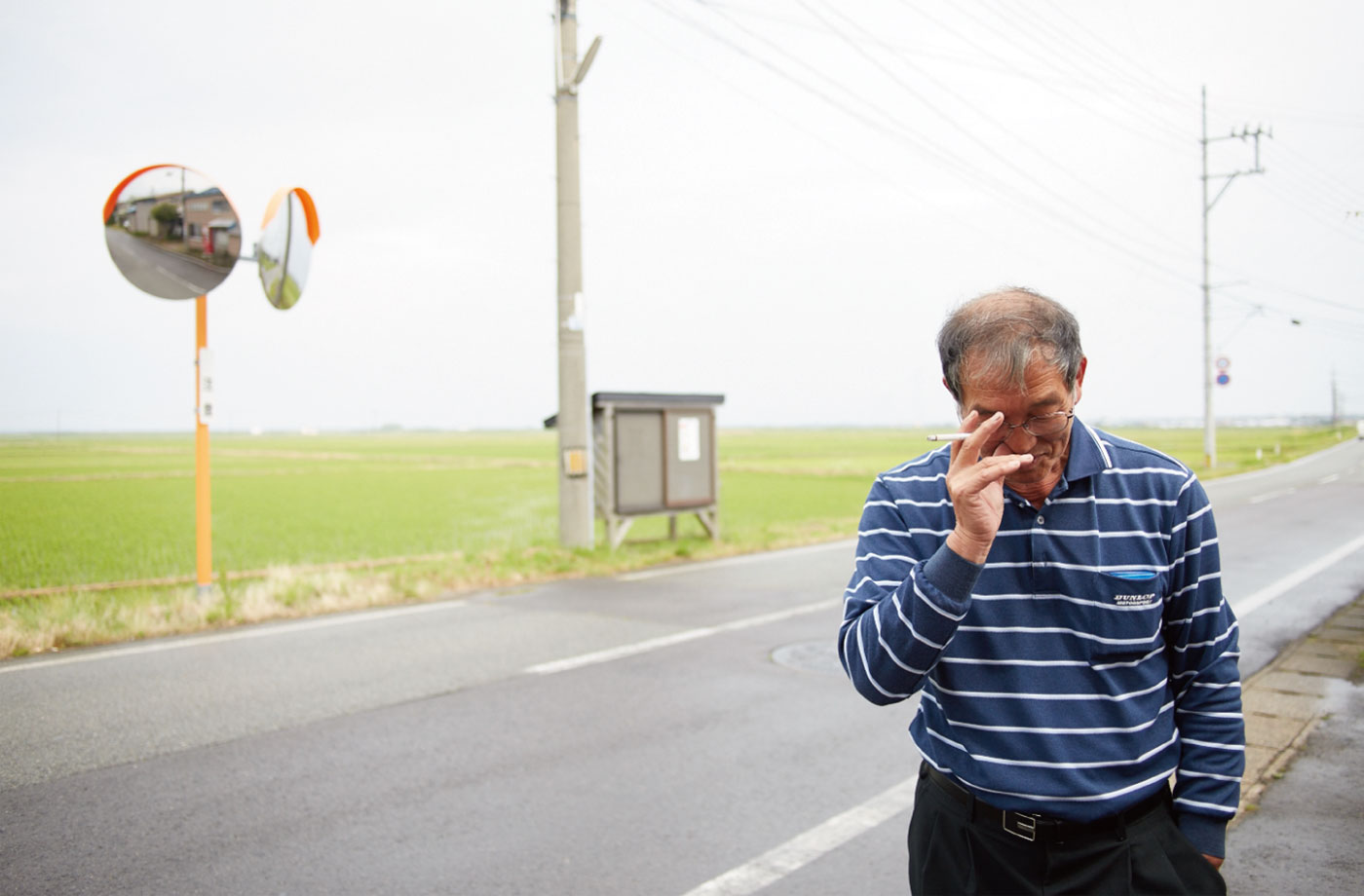 Mr Hajime Chigama, the head of the company

YABUKI
Ha! Ha! So how did you get into the ice cream business?

CHIGAMA
I used to be in the Self Defense Force. I quit because I had a bad back. My father and I decided to set up a business together, and this is what the two of us started.

YABUKI
Were there many babahera ice businesses in those days?

CHIGAMA
No. It’s just the same now as it was. Around here [Oga] there were just four or five sellers. Originally, we had part-time high school students sleeping here on the second floor.

YABUKI
So it wasn’t just “baba” ladies doing this in those days.

YABUKI
Ha ha! I bet the baba ladies weren’t too happy about that!

CHIGAMA
At the time most of the people selling the ice cream were in their 40s.

YABUKI
I know. I’ve actually seen an ice cream lady getting angry saying “I’m not a baba!” to the children asking for “babahera” 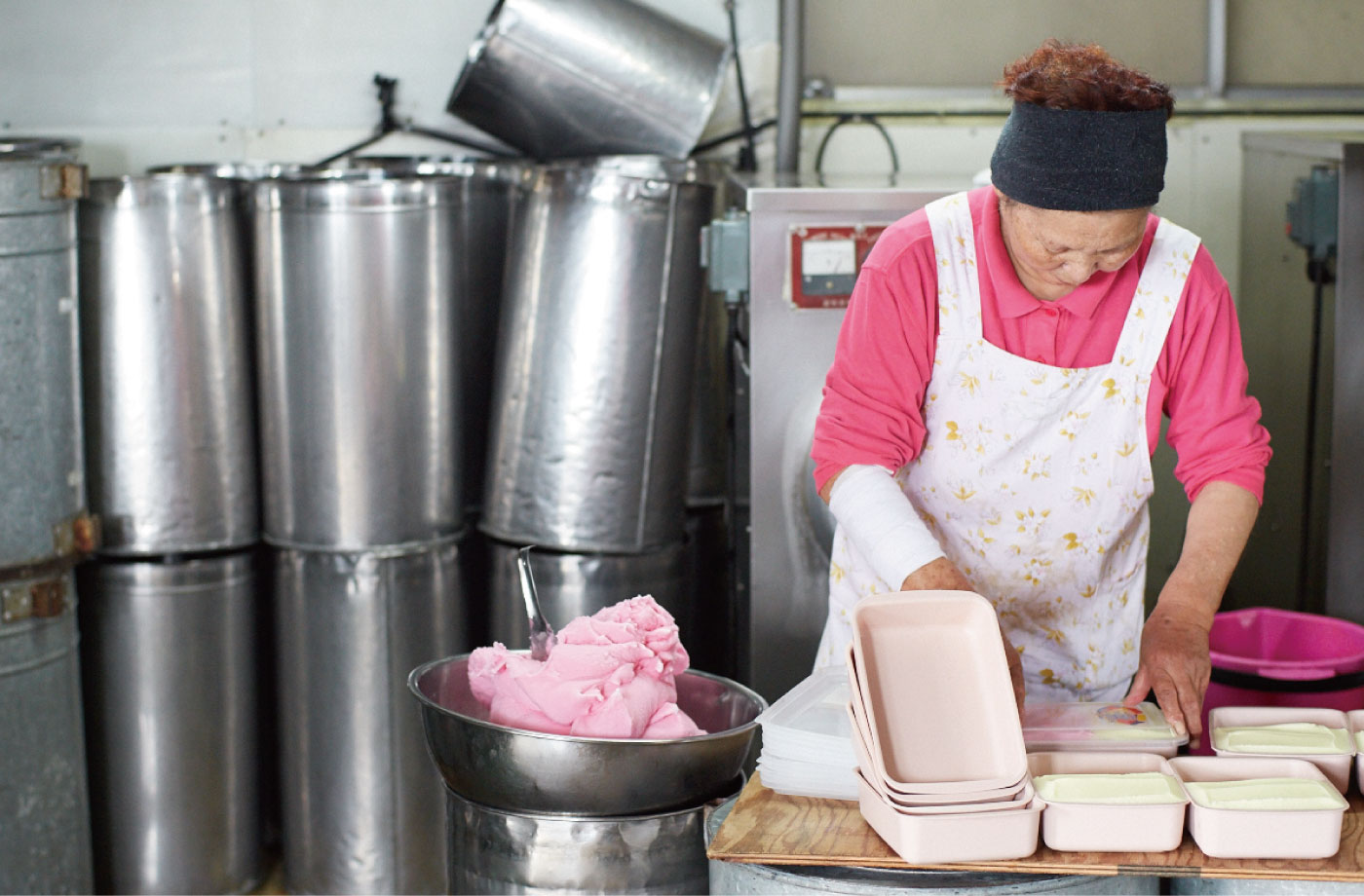 YABUKI
The ice cream that you’re freezing now, is this what you’re going to sell on Saturday? I’d love to see the ice cream ladies in action from when they leave in the morning up to when they sell the ice cream. I don’t mind watching from a distance.

YABUKI
Once they’ve all assembled, do the ladies drive off in their cars to sell the ice cream?

YABUKI
I’d love to see that…

CHIGAMA
It’s very early you know. The first person to leave goes out about five in the morning…

YABUKI
Where do you sell the ice cream at the moment?

CHIGAMA
We sell everything in Akita within the prefecture. Honjo, Odate, Ani, Yokote…

YABUKI
Some quite faraway places, right? That’s why you have to leave at 5 in the morning I suppose. OK, I’m going to come in at 6.30 on Saturday if that’s OK with you. Thank you! I can’t wait! 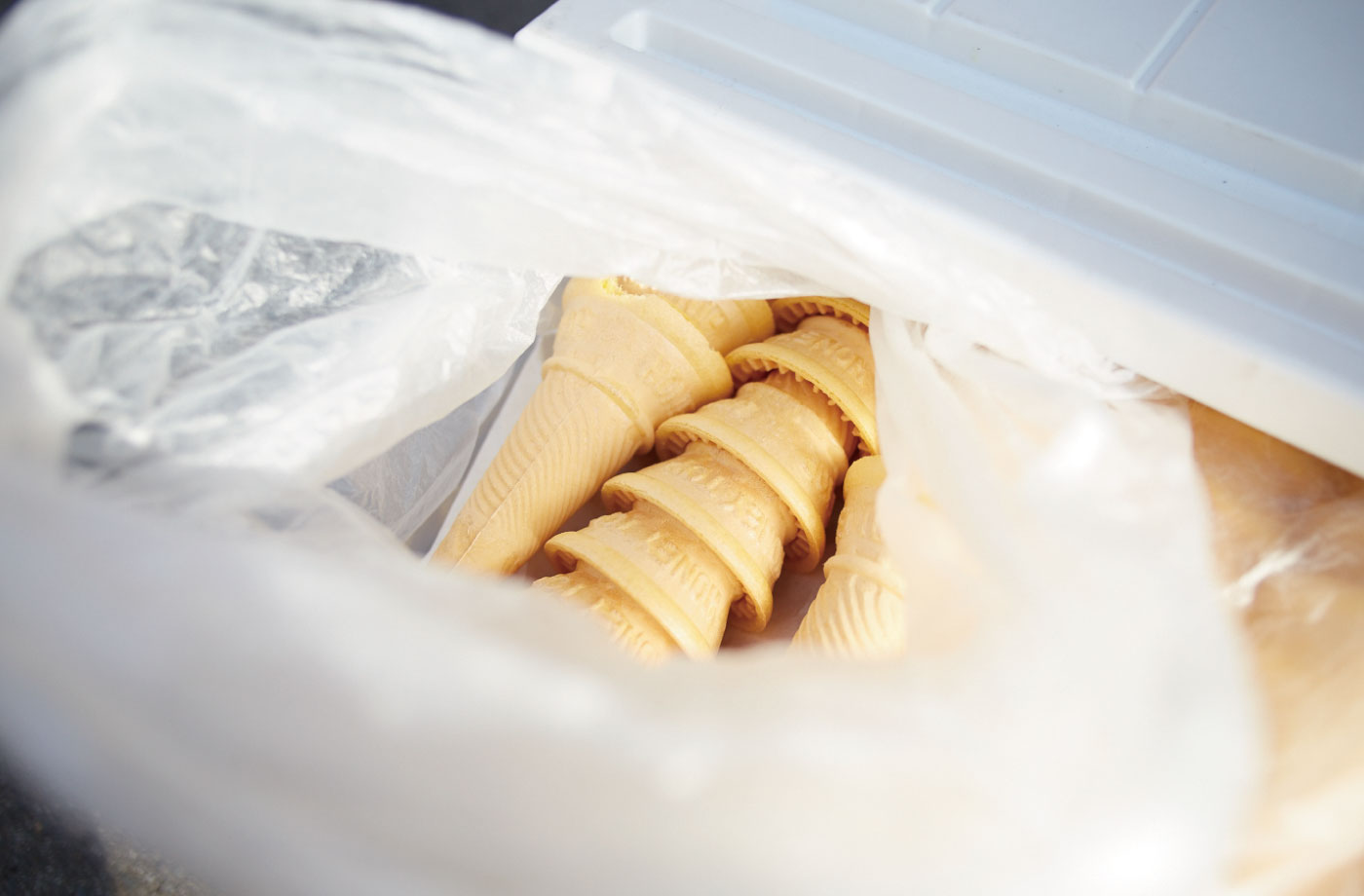 I’ve eaten babahera ice cream many times, but there’s so much going on behind the scenes that I don’t know about. Next time, I’m going to be right beside the ladies as they go about their business, starting with the morning preparations. I’ll do my best to wake up on time!

② Morning with the Baba